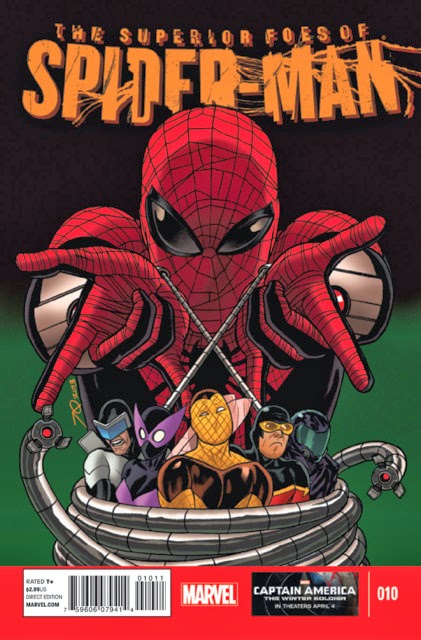 So while Boomerang was trying to get himself out of a jam with both the Chameleon and the Owl while also managing to anger his date in the process, and while the Shocker was having to put up with the head of Silvermane demands for Pizza and gangster movies, what have the rest of the not-quite Sinister Six been up to? Do we find out how they managed to track down Boomerang as we saw in the last issue? Or how they got hold of a school bus, or why it was so damaged with martial arts weaponry? Actually...no. We get a another fill-in issue showing Beetle, Speed Demon, and Overdrive sitting around swapping stories in a bar.

THE STORY
After getting a two-page spread re-introducing us to the new Sinister Six, we open in a bar in Brooklyn sometime between Superior Foes of Spider-Man #8 and #9, where Overdrive is struggling to use a urinal, telling himself “He's not really looking at you.” As it turns out, what Overdrive is trying not to look at is a poster of Hercules.

After finishing up his business in the restroom, he rejoins Beetle and Speed Demon, as the three of them are taking a break in their search for Boomerang. Speed Demon suggests to Beetle that they can always either get new members for the Sinister Six, or just get one more to become the Frightful Four, but Bettle says those villains are only in it because they were defeated by Reed Richards of the Fantastic Four, and she doesn't want to be labeled a “vendetta villain” as she's in it for the "big scores." When this makes Overdrive asks about owners of the bar they have tied-up and gagged, Beetle states they might as well rob the place as long as they're there, but since the safe is on a timer, they can just wait and have a few drinks.

Beetle asks Overdrive why he took such a “weirdly long time” in the bathroom and compares to how long she and Speed Demon take, Overdrive states he's not good with public restrooms. This makes Speed Demon ask Overdrive if he's ever used a bidet or if he has one in his house, and a thought balloon shows that Overdrive assumed a bidet was a drinking fountain. Speed Demon then asks out of the blue who the most impressive guy they ever beat was, and Overdrive states he once got the better of Hercules. 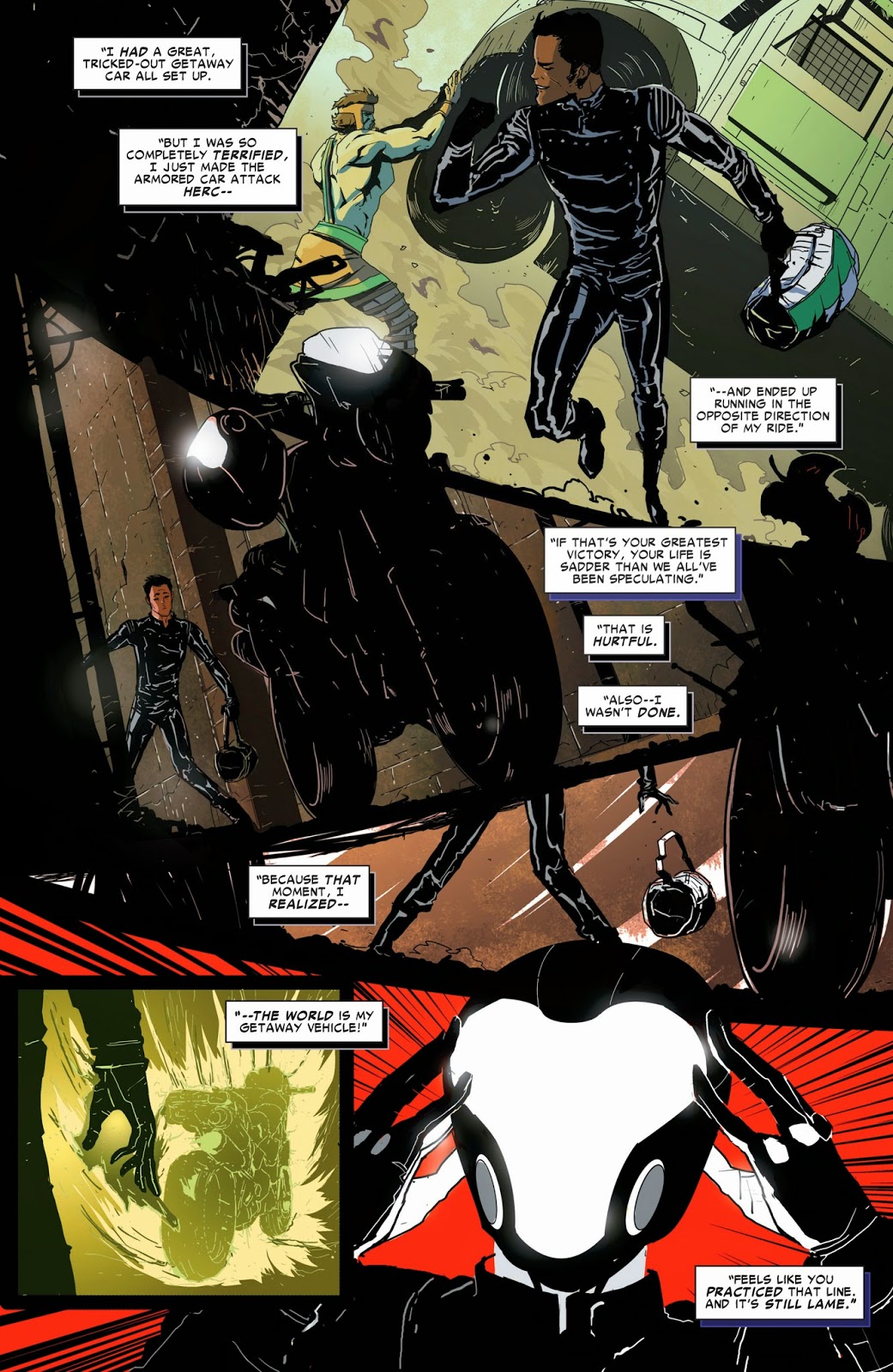 This leads to the story of Overdrive telling about the first crimes he ever pulled, before he called himself Overdrive. He had used his nano-bacteria to pull an armored car robbery, making sure Spider-Man was clear across town; unfortunately, he didn't count on Hercules arrival. Overdrive was so terrified of getting caught, he unknowingly made the armored car attack Hercules and ran in the opposite direction of his getaway car. However, upon spotting a motorcycle, Overdrive came to realize that, with his nano-bacteria, “the world was his getaway vehicle.” Just as he put on the motorcycle helmet to get on the bike, Hercules caught up with him. However, because he didn't recognize Overdrive with the helmet on, he asked him which way the armored car robber went. Overdrive directed Hercules to an alley, then used the opportunity to escape. Thus Overdrive concludes his story by saying this is why he wears a motorcycle helmet as part of his costume.

When Beetle assumes Overdrive kept it as a “lucky helmet,” Overdrive corrects her by saying he keeps it because he's afraid Hercules will recognize him without it, and that Hercules may assume that, because he has the power to modify vehicles, that he must also have super-strength and thus get his ribcage shattered by mistake. “Because,” as he explains, “everyone assumes everyone in this business has super-strength.” Speed Demon concurs, as does one of the hostages, who also asks why the villains just crack open the safe and leave. Overdrive points out that Beetle has weapons that could cut the safe open, but Beetle reveals that, because she's on parole, she doesn't carry any weapons unless she has to. And since Overdrive admits that his powers won't work on the safe because it doesn't have wheels, Beetle decides to kill some more time by telling how she “won against Daredevil.” 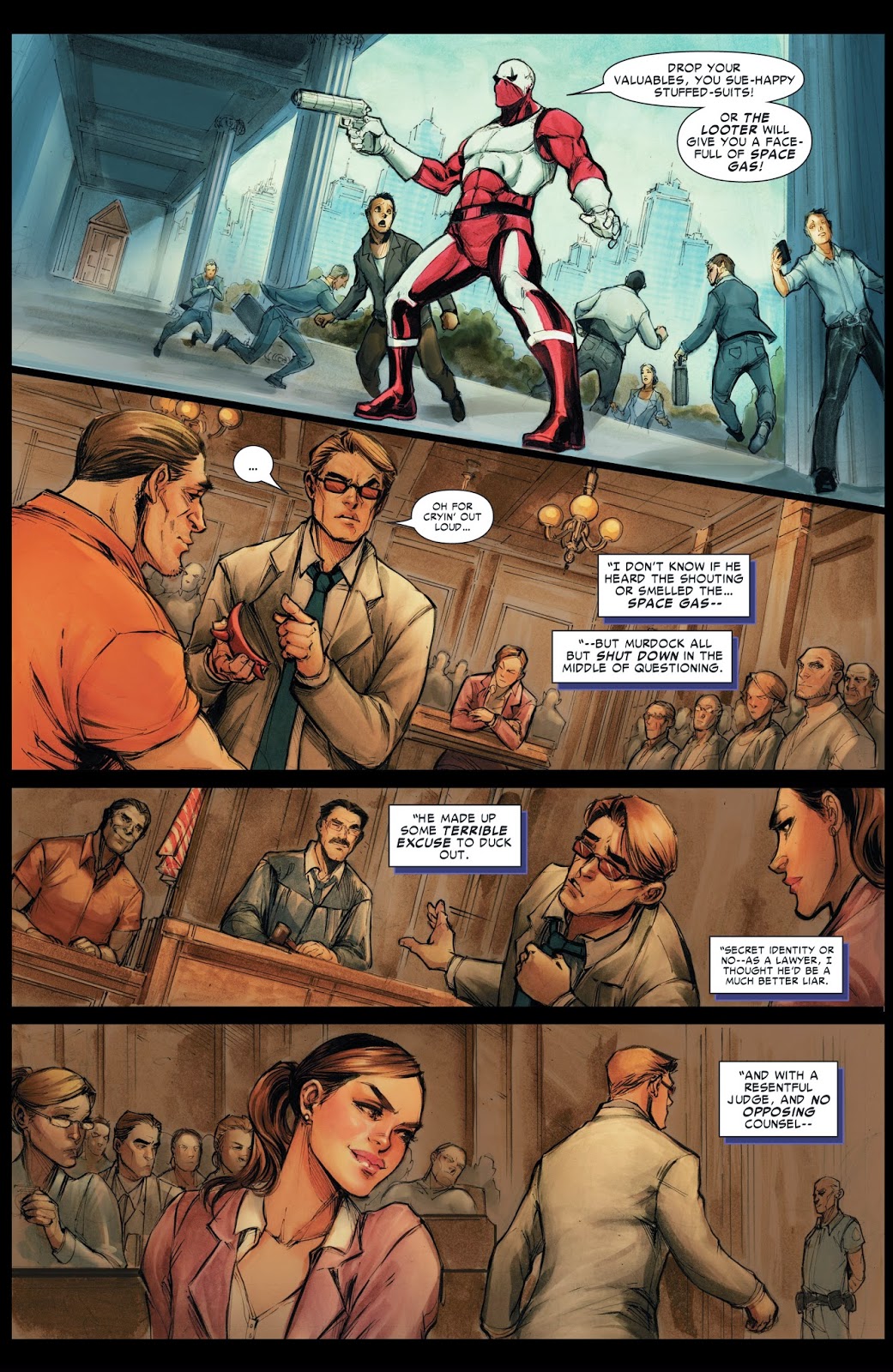 Beetle explains that back when she was just criminal defense attorney, Janice Lincoln, a plantiff Matt Murdock was representing was trying to sue one of her firm's clients. However, since there were rumors that Matt Murdock was also Daredevil, Janice thought she could get her client off by either proving the rumors true, or using them against him. Thanks to information from her dad, Tombstone, Janice knew Daredevil had heightened senses, and thus all through the trial, she tried many and subtle ways during the trial to make him use his powers. Only Matt was very careful not to expose himself. So Janice decided to force Matt to leave the courtroom by texting the Looter. When Matt heard the Looter outside the courthouse holding people at gunpoint, Matt, in order to protect his secret identity, was forced to come up with an excuse to leave in the middle of the trial. And because this angered the judge and there was no longer any opposing counsel, Janice was able to get her client off on a technicality. Overdrive, upon hearing that Beetle knows the Looter, suggests she can get him to join the team. Beetle, however, says the Looter is not interested, and a flashback from “two months ago” reveals that, after Janice became the Beetle, she tried to approach the Looter at a dance club. But when the Looter learned she gave up being a defense attorney to become a super-villain, he literally shoved her in the face, saying that she was now “competition.”

Speed Demon, after quickly gathering up the hostages as they try to escape, thinks Overdrive and Beetle's stories were pathetic, and decides to tell his story about the most impressive superhero he's ever beat. He says he could tell the story of how he brought the Thing to his knees (which, in reality, his repeated punches were so ineffective the Thing nearly collapsed from laughter), or the story of how he “brought the X-Men to a standstill” (except he was really frozen by Iceman), or about how he “dusted the Avengers” (even though he was really cleaning the Avenger's mansion as punishment). However, Speed Demon decides to tell how he got revenge on Hercules after being “sucker-punched” by him (even though Speed Demon, because he didn't look where he was going, was actually clothes-lined by Hercules). Thus Speed Demon declares he gave Hercules the clap. 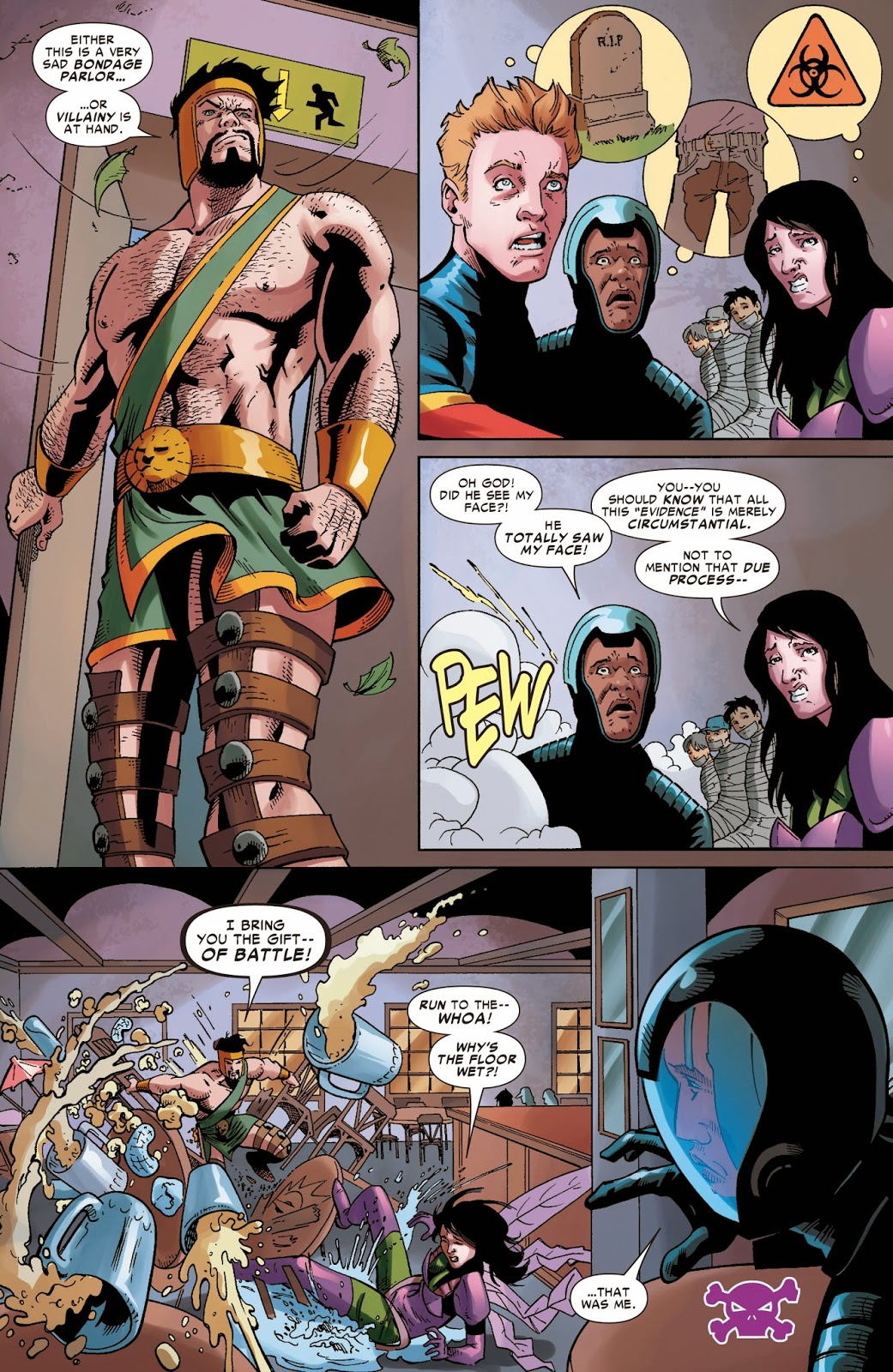 When Overdrive and Beetle assume that Speed Demon had sex with Hercules, Speed Demon explains how he hired a “cape-chaser” he once hooked up with to do it. He says he gotten back in touch with her when she called him to inform him she had an STD and wanted him to get tested to be on the safe side.  So Speed Demon found out where Hercules lived, and tipped the cape-chaser off where to find him. This makes Overdrive say that all Speed Demon did was get Hercules laid, while Beetle points out that, because Hercules is a demigod, he might be immune to venereal disease, a fact that Speed Demon is forced to admit this might be the case.

At that moment, Hercules enters the bar, ready to have himself some drinks, when he spots the villains and their hostages. Speed Demon panics and takes off. Overdrive literally soils himself as he realizes Hercules has seen his face. And Beetle, who can't help but think Hercules may have VD, states how everything Hercules is seeing is “circumstantial” and that there's a matter of “due process.” Hercules declares “I bring you the gift of battle!” as he smashes his way through. Beetle slips and wonders why the floor is so wet, which makes Overdrive admit “that was me.”

THOUGHTS
If you're a regular comic reader and someone should ask why having a particular creative team is so important, have them read the previous issues of The Superior Foes of Spider-Man, and then show them this one. Because for as much as James Asmus and the various guest artists try to emulate Nick Spencer and Steve Lieber, they just aren't Nick Spencer and Steve Lieber. 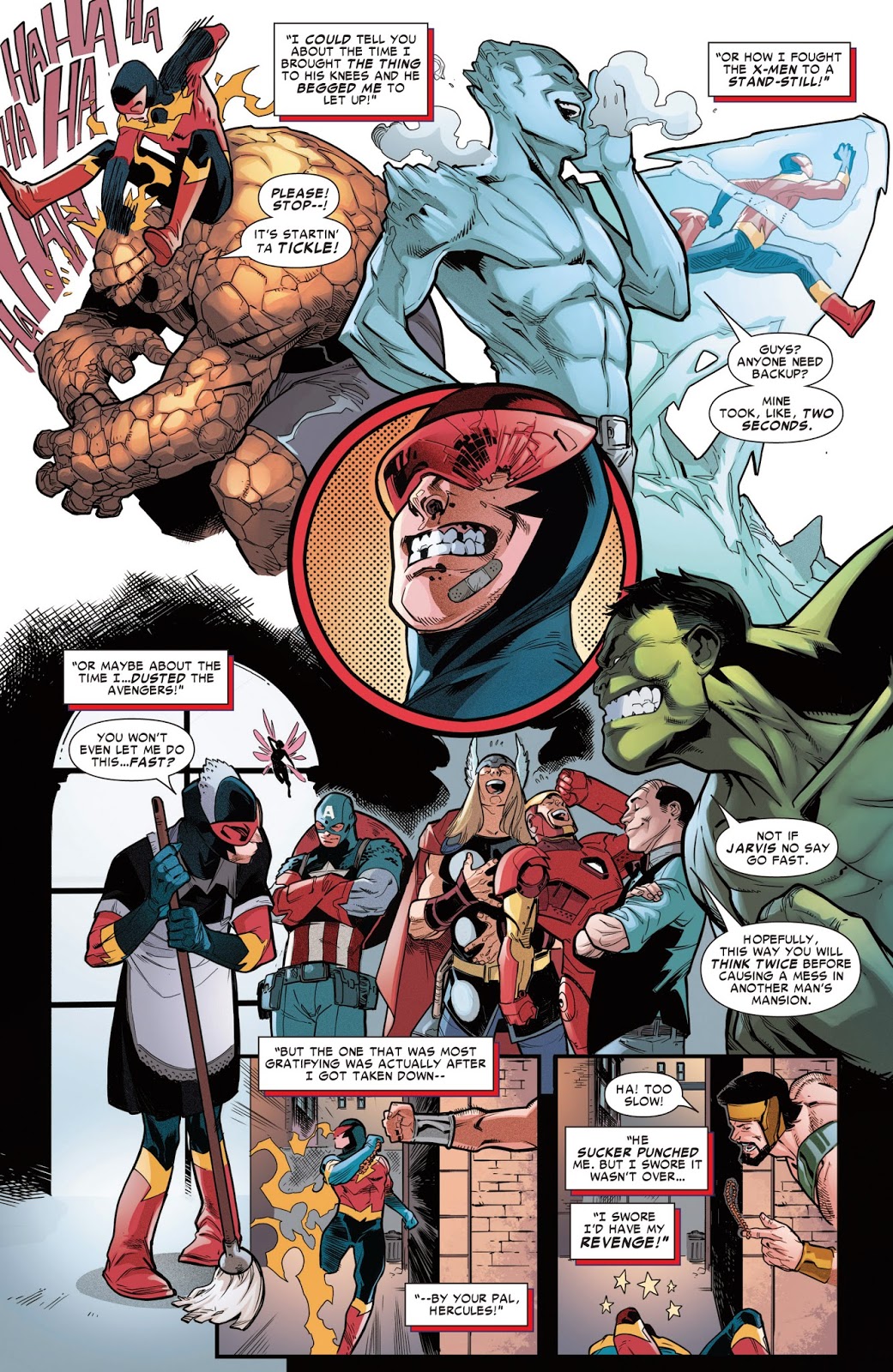 Not that Superior Foes of Spider-Man #10 is a bad comic necessarily; it's still, at times, a fun read, and is still good for a laugh or two. Seeing Speed Demon try to spin his failures into victories, coupled with what actually happened, is quite assuming, and close to the type of humor readers have come to love about this title. Unfortunately and far too often, many of the jokes fall completely flat, the sight-gags are obvious, and the humor is very forced. You know that a writer is struggling for comedy when they have to rely on jokes—unfunny ones at that—about pissing one's pants and sexually transmitted diseases.

What's more, the story itself is nothing more than a recycled version of “Almost Got 'Im” from Batman: The Animated Series, only in a different locale and, as in the case of Beetle's story, not always involving the same superhero. And of course, instead of being genuine victories over their rivals, Overdrive, Beetle, and Speed Demon's game of one-upmanship only serve to underscore their incompetence as villains. Even Janice's win against Daredevil, the best of the three both in terms of her plan and the story itself, still results in her getting rejected by the Looter, the pinnacle of generic D-list super-villains. The multiple stories also allow for the fact there are multiple artists for this issue to be less distracting and jarring, even though, compared to Lieber's work, all the artists seem rather conventional despite their differing in styles.

In short, this issue is simply filler; it's even titled “Filling In” in keeping with the series own sense of self-awareness. And unlike Superior Foes of Spider-Man #7, you don't really learn much more about these characters save for why Overdrive wears a helmet. You can either pick this up, or skip it and wait for Spencer and Lieber to return. Your choice.
Read More
Newer Posts Older Posts Home