I have to say, I'm pretty surprised that for once, in a long while, the cover photo of this issue actually does take place in this issue- in the last panel.

The story begins with Ana Maria, captured and taken to the Goblin's underground lair. There the Goblin is busy watching a news report about how Monster aka Carlie Cooper, and Peter Parker presumably died in the explosion at Parker Industries. The Goblin is frustrated that Peter died such a pathetic death, spoiling his plan of getting to Spider-Man by attacking those close to Peter Parker.

At this point it is clear that the Goblin only attacked Peter and his loved ones because Peter knew Spider-Man. ( Looks like Peter Parker and friends are forever in danger, whether the world knows his identity or not)

We also find out that the Avengers are busy fighting off the Goblin's army in the streets, trying to help the citizens. At this point, Mayor Jameson is advised to use his army of Goblin Slayers to take help aid the public. However, Jameson insists that he wants to take out Spider-Man instead!

Next we see Mary Jane, with Aunt May, Jay and he new boyfriend, safe out of the city. She receives a call from Peter, instructing her to take his family to safety. She tells him that she has already done that and tries to tell him that Aunt May is freaking out. Peter pays no attention to her, saying he has more important things to do, hanging up the phone soon after, reminding Mary Jane why she wants nothing to do with Peter.

Meanwhile, in the lab, Peter and Sajani are trying to create a fix for Carlie. Before Peter can finish however, he gets a call from the Green Goblin, meant for Spider-Man. The Goblin tells Spider-Man that he has something to show him, instructing him to put on his Spider costume and those fancy googles he created. Peter leaves Sajani to finish up the research, telling her that he has already done the difficult parts.

Once in his Spider-Suit, Spider-Man is able to see in his lens ( thanks to a hack from the Goblin) all the places precious to him as Otto, destroyed! 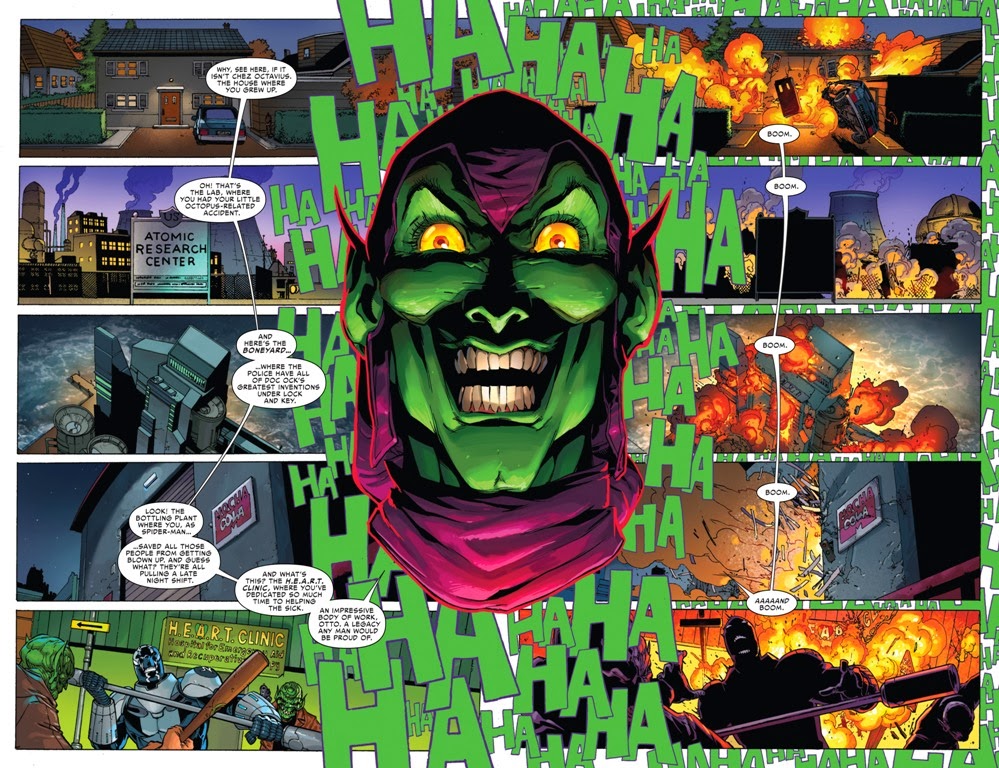 At this point, Otto, the Superior Spider-Man wonders, what Peter Parker would do?

In the meanwhile, inside of Otto's head the real Peter Parker is busy living out the life of Otto Octavius and is now catching up to the part where Otto is being told that his body is degenerating. He has now completely lost his memory of being Peter Parker and thinks that he is Dr Octopus. Obviously, something interesting is going to happen once we reach the part where Otto has Peter's memories put into his head.

Back in real life, Spider-Man calls the chief police to send him coordinates to help the citizens that he is too busy to help. The police however are done taking orders from Spider-Man as Mayor Jameson has accused Spider-Man of working together with the Goblin. The Spider Slayers are then deployed at the location Spider-Man sent them, to look for Spidey. 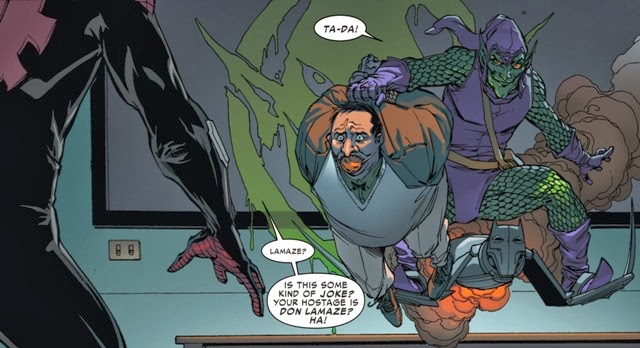 Spider-Man finally reaches the meeting point with the Goblin, only to be shocked that the hostage the Goblin has captured is not Ana Maria, but Dr. Lamaze instead. The Goblin points out that Otto is behaving like the real Spider-Man, coming in with no back up whatsoever. He is also shocked that this Spider-Man doesn't care much for Dr Lamaze as he had thought he was Otto's closest thing to a friend. Little does the Goblin know that the footage he had watched of Spider-Man saving Dr Lamaze and Ana Maria was not for Dr Lamaze, but for Ana Maria instead.

Disappointed, the Goblin proceeds to leave, saying that he will come back with a real hostage that Otto really cares about. The Superior Spider-Man refuses to allow the Goblin to leave and unleashes his metal spider legs. The Goblin simply laughs however and Otto soon finds out that it is because he has hacked Spidey's gear, causing the arms to try to kill Spider-Man. 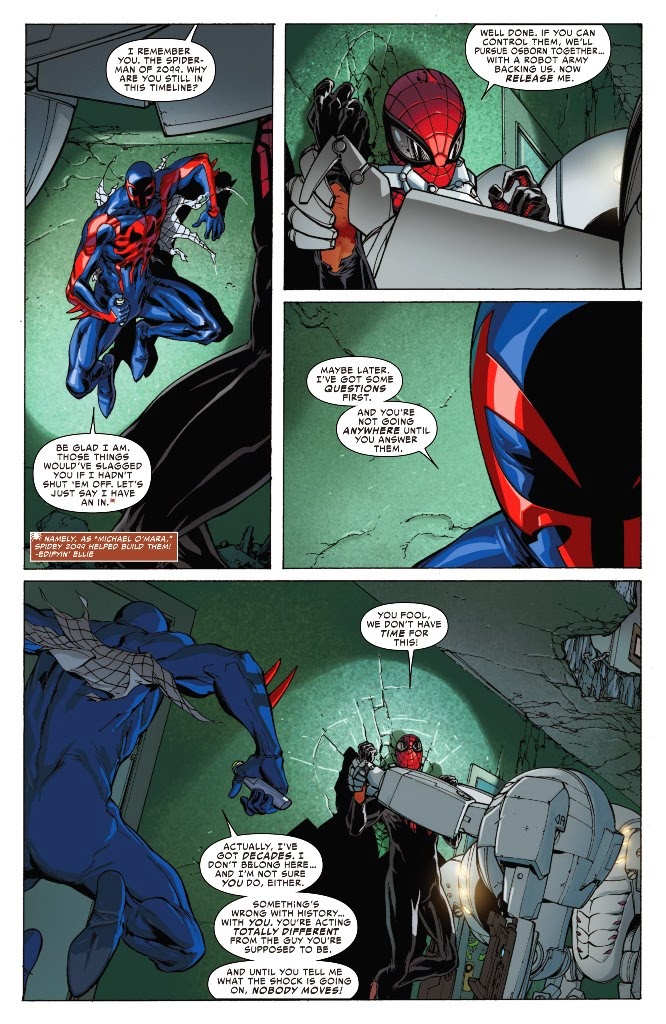 Spider-Man 2099 however wants some answers to his queer behavior as he had noticed by now that the Spider-Man in the suit is not the real Spider-Man. Before he can get any answers, the spider slayers turn back on, not at his hand or at Jameson's, but at Norman Osborn's hand instead!

The cover for this issue is essentially the last panel of this book.

My first thought is that this summary of the issue is way too long!

Working backwards, we see that Norman Osborn is truly the man behind the Goblin Mask. Then again, it is possible that this 'Goblin' is simply further hacking the system to give the illusion that he is Norman Osborn. In my personal opinion however, I really don't think it is someone else behind the Goblin mask anymore.

Next we have Spider-Man 2099, figuring out that Spider-Man is not really Spider-Man! I'm really glad that this guy is able to see through the utterly obivious disguise Otto is putting on. The Avengers, Daredevil, and Mary Jane should all have figure this out long ago. Thankfully, we finally have a good guy who knows the secret! (Carlie isn't counted as she was told the secret by Peter)

As for the new improved Spider Slayers, Mayor Jameson has let his personal vendetta get in the way of logic, by deploying the slayers to attack Spider-Man instead of help fight the goblins, giving Glory Grant good reason to quit her job ( I failed to mention that earlier). 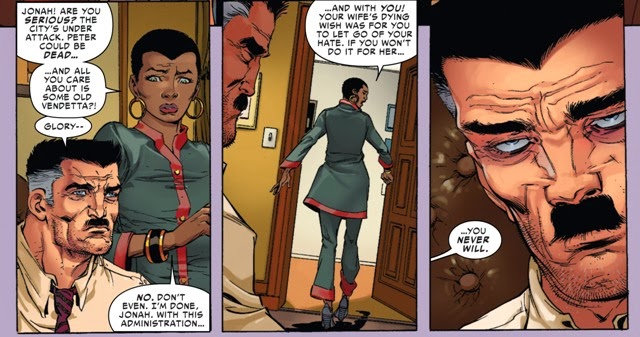 This could mean the end of Jameson's run as Mayor. Having the unstable spider slayers out in the city roads hacked and controlled by the Goblin is certainly going to put an end to his career I believe.

Moving further backwards, Dr Lamaze's death was completely unexpected, and in my opinion, completely unnecessary. Sure, he may have inspired the Superior Spider-Man to be a better person with his final words (a possibility), however, that was truly not the best way to get rid of the character.

I particularly liked the way the Goblin kept comparing Otto as Spider-Man to the real Spider-Man throughout the issue. The scene where the Superior Spider-Man scoffed at the Goblin's move to use Dr Lamaze as hostage was fantastic. This really left the Goblin dumbfounded for a while. It is a matter of time however that the Goblin realizes that he already has in custody a hostage that would really get to Otto.

The fact that this Goblin is using his same old tricks to fight Spider-Man - taking the people he loves and putting their lives on the line further proves that it is Norman Osborn behind the mask. This leads me to wonder what the Goblin thinks was the reason he killed Gwen Stacy if he doesn't know that Peter Parker is Spider-Man, other than the fact that she has just given birth to his kids? And how did he think that move would affect Spider-Man? If I was the Goblin, I'd really be puzzled at my past actions. But that is a different story.

Moving even further backwards, is the real ghost Peter Parker, who is in Otto's mind, reliving his life, thinking he is Dr Octopus. As mentioned earlier on in the summary, and also pointed out by others online, it is quite likely that Peter Parker will regain his memories and thoughts when he reaches the point in Otto's life where the real Spider-Man merged his memories with Otto's. From there, our ghost Peter, with more that 32 memories of his past life will be strong enough to fight his way out, possibly taking over his physical body, most likely after a more complicated sequence of events.

Speaking of fighting of the mind, we also have Carlie Cooper, who is at the moment struggling and fighting for control of her own mind. Peter had last left Sajani to finish up the cure to Carlie's condition. In my opinion, her story can go a few ways. 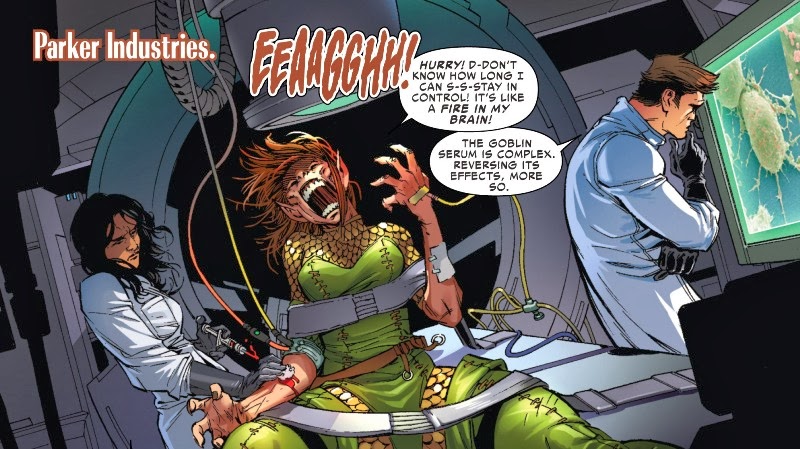 The list keeps going on, but at this point I highly doubt that she will be killed off as a character, much to the disappointment of some haters.

Finally, all the way at the start of the issue, we have Menace, visibly distraught by the fact that Carlie had died, according to the news. We all know that Lily and Carlie were practically sisters before Lily became Menace. Though most of us thought that relationship ended long ago, apparently, Lily still values her friend's life, to some extent. Also, I am just noticing this now, but the fact that the Lily aka Menace is hanging around with this Goblin King, even more proves that the Goblin we have here really is Norman Osborn!