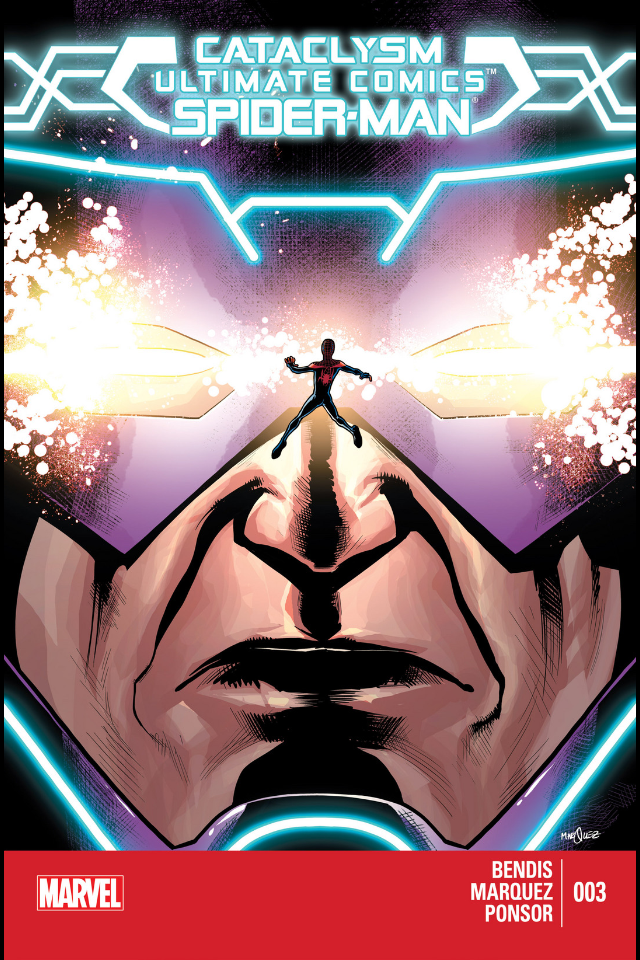 Hello everybody and welcome to my review of Cataclysm: Ultimate Comics: Spider-Man #3. 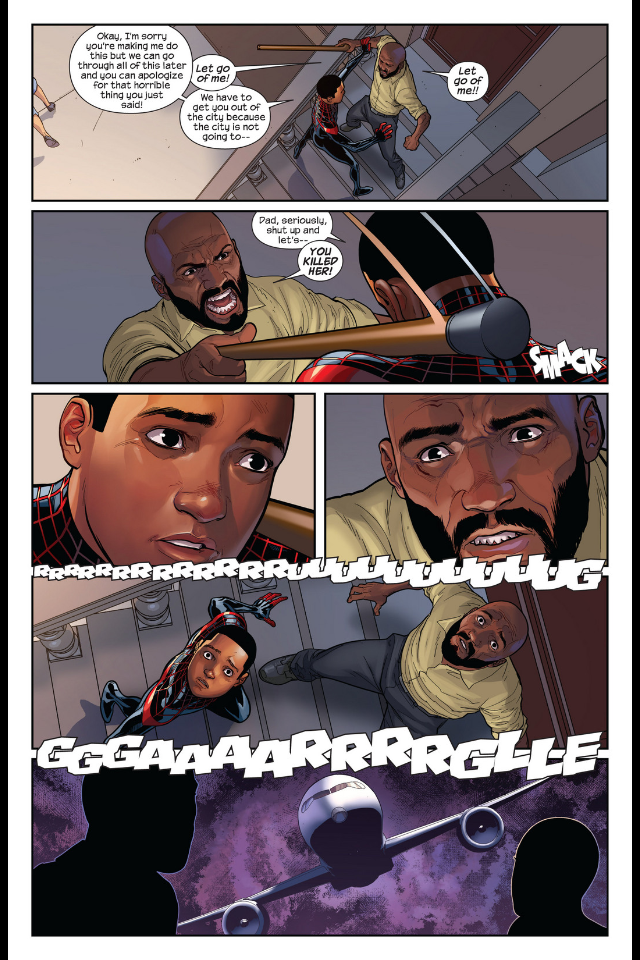 British Airlines Flight 411 flies into New York attempting to contact Newark Tower. They are swiftly contacted by two fighter planes that tell them to turn around, saying this is now restricted airspace. Confused, the pilot attempts to contact Newark Tower again only to be told by the now-pulling-back fighters that there is no Newark Tower, or even a Newark anymore. Before he has time to comprehend the information, the pilot is left shocked at the sight of Galactus, who shunts the plane away with a flash of light.

Down in the street, Miles is attempting to convince his father to leave with him after unmasking right in front of him. Jefferson however, yells at Miles to get off him, blaming his son for the death of his wife and brother. At that moment, the plane comes crashing in, tearing into one of the apartments with it's left wing, which promptly snaps off. Miles protects his dad from the debris and helps the people injured by it. He then leaves to deal with the plane itself, telling his father he'll be right back. As he goes, Jefferson falls to his knees in tears. 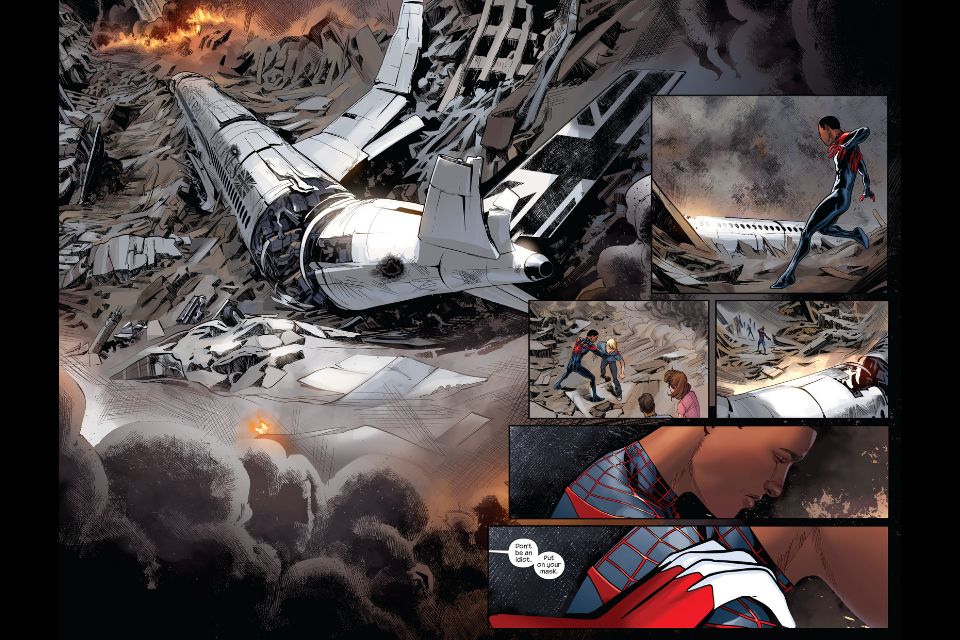 Miles quickly comes across the wreckage of the plane (well at least it didn't end up on an island) and helps a few people to safety. Spider-Woman then arrives and tells him to put his mask on, saying it helps with the smoke. Miles does so and makes his way into the plane, finding J. Jonah Jameson as the sole passenger. Miles helps him out of the plane seconds before it explodes. After setting Jameson down on the pavement, Miles runs back to the plane shouting for Jessica, who's helping a little girl to safety. They both agree that they need to get all the nearby civilians out of the area as soon as possible. Cloak & Dagger then arrive, saying they can teleport people using Cloak's powers. Naturally a couple of people are apprehensive about this, with the little girl Spider-Woman saved being the most vocal. Dagger gently tells her that it isn't scary, and guides the girl in along with several others. Cloak drops them off at a hospital in Pittsburgh (where his mother was a resident) before heading back to New York, where everyone is suddenly way more enthusiastic about going with him.

Just as Miles asks how many Ty can take at once, another explosion rocks the plane, sending more a huge chunk of debris into the air. Fortunately, Bombshell arrives just in time to destroy it. Miles instructs Cloak to take Jameson, the rest of the kids and an old lady (that was random). Before being teleported away, Jonah lets everybody know who he is and tells Miles that when this is over, he's going to change his life.

Some time later, Miles heads back to his house, only to find the place empty and his dad gone. Standing alone in his house, Miles wonders aloud what he's supposed to do now? As if on cue, he's contacted by Captain America, who explains that they may have found a way to stop this, and they need Spider-Man's help... 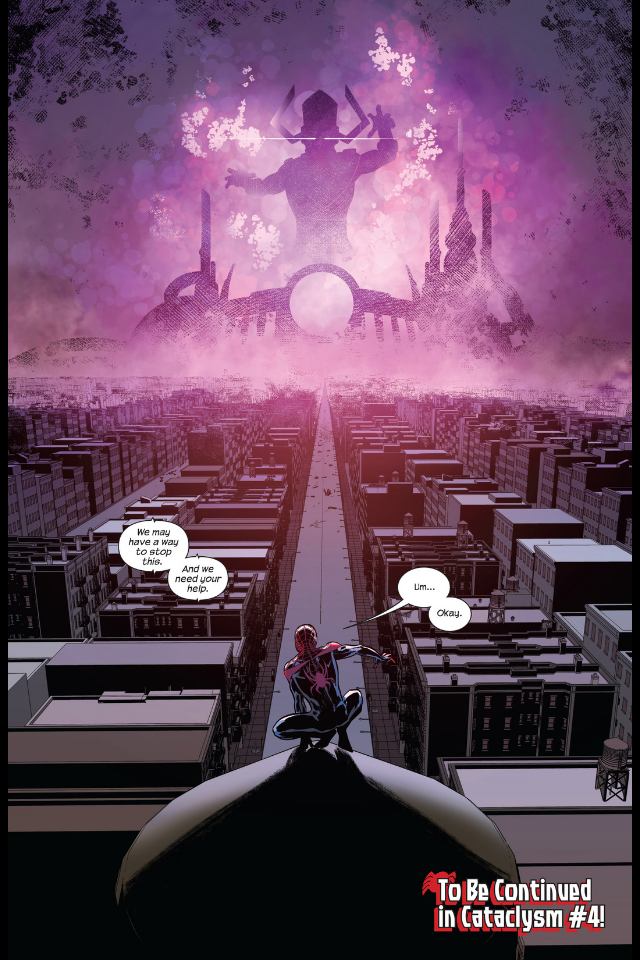 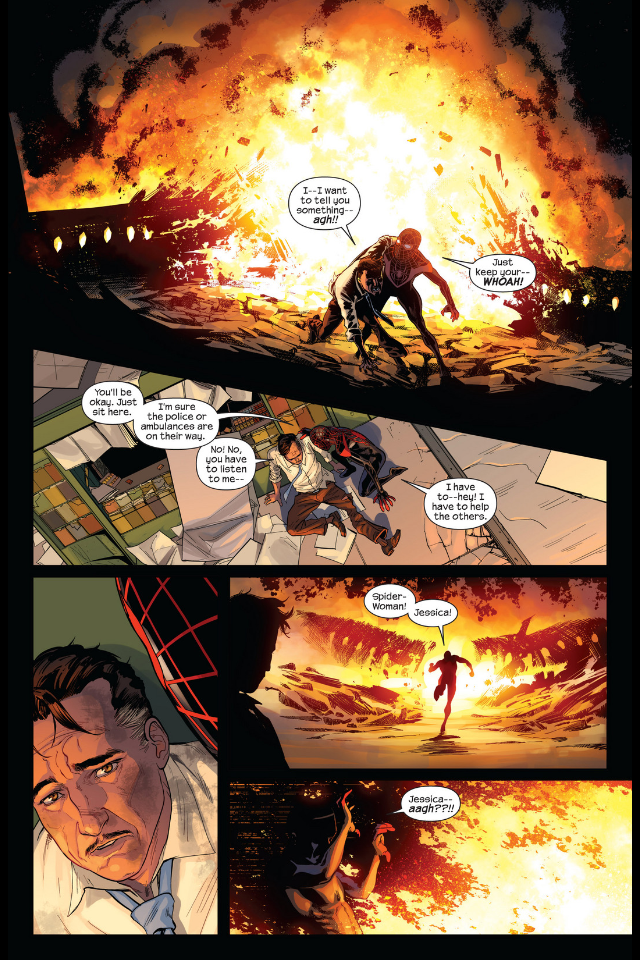 This concludes what has been a pretty darn good tie-in to Cataclysm these past couple of months, and this final issue is no exception. In fact consistently, I'd say this has been better than the main series it's tying into (which is kind of disappointing given that Bendis wrote both series. I guess his focus was more with this one?).

The confrontation between Miles and his father is easily the high point of the issue. There's a real emotional charge to these scenes and while Jefferson says some pretty hurtful things to Miles about his mother, I don't feel as though he's entirely unsympathetic. The man is still suffering from the loss of his wife, who he lost just a year ago, and now he's just discovered that his only son is one of the very people he's been crusading against, not to mention that the world is in chaos thanks to the giant purple guy getting ready to eat it. He clearly can't cope with the stress of it all, and I doubt there are many people who would. Jefferson's abrupt departure was quite a gut-wrenching way to end the tie-in, though I don't think he'll be gone for long as we still have his shady past to uncover, and it would make more sense for him to be around when that happens. 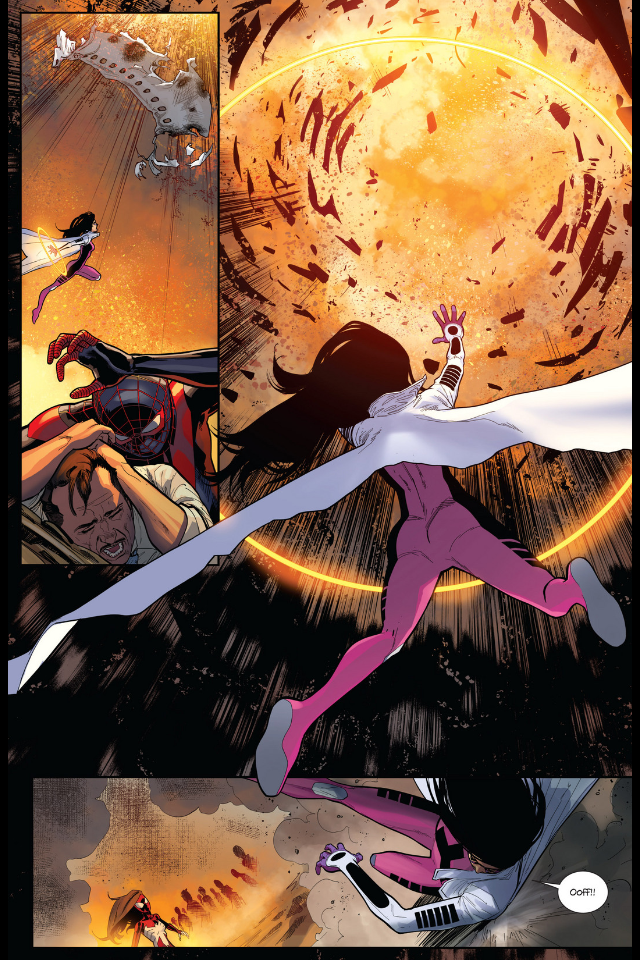 This tie-in has also seemed to serve as another test-run for the group that will become the All-New Ultimates when Ultimate Marvel NOW! launches, along with Miles Morales: Ultimate Spider-Man, and in that respect, it's done a really good job, though Spider-Woman didn't have a huge amount to do besides sharing some banter with the Ultimates. Both of the new series look pretty cool and the promise of a classic Ultimate Spider-Man villain returning is quite exciting (my moneys on Doc Ock or the Green Goblin). The solicits have also teased that the final page will make Ultimate Spidey fans scream, which could possibly be teasing the return of Ultimate Peter Parker? However, if this really is the case, then don't expect him to resume the mantle of Spider-Man, at least not immediately. Peter will likely be impressed with how Miles has carried on his legacy and therefore choose to keep his existence a secret, apart from those closest to him, perhaps even becoming the Ultimate Scarlet Spider? This is of course though, all just speculation on my part, though it would certainly make for a compelling narrative in my opinion. Jameson's appearance was unexpected, but nice, and I'm interested to see how he plans to change Spidey's life. It was also good to get that brief moment of levity when everyone frantically raised their hands to be transported by Cloak, since it lightened the otherwise heavy subject matter of the book.

If I had any problem with this tie-in on a whole it would be that Aunt May and Gwen didn't make an appearance. I would have thought that Miles might make them a priority given how there's been something of a romantic spark implied between him and Gwen in past issues, but overall it's not a huge problem and hopefully they'll reappear in the new series.

Despite a couple of stumbles last issue, David Marquez is back on top form here with some truly atmospheric and fantastic artwork. From the Galactus cameo to the shot of the wrecked to the ominous final panel, there is detail aplenty crammed into this issue, as well as plenty of silent moments that really capture the emotion of the situation. Justin Ponsor's colours also add to the emotive scenes as well as giving the issue a bright and varied palette. As always, Bendis has done a great job with the latest chapter in Miles' story, and I'm looking forward to seeing what he has planned for Ultimate Spider-Man next... 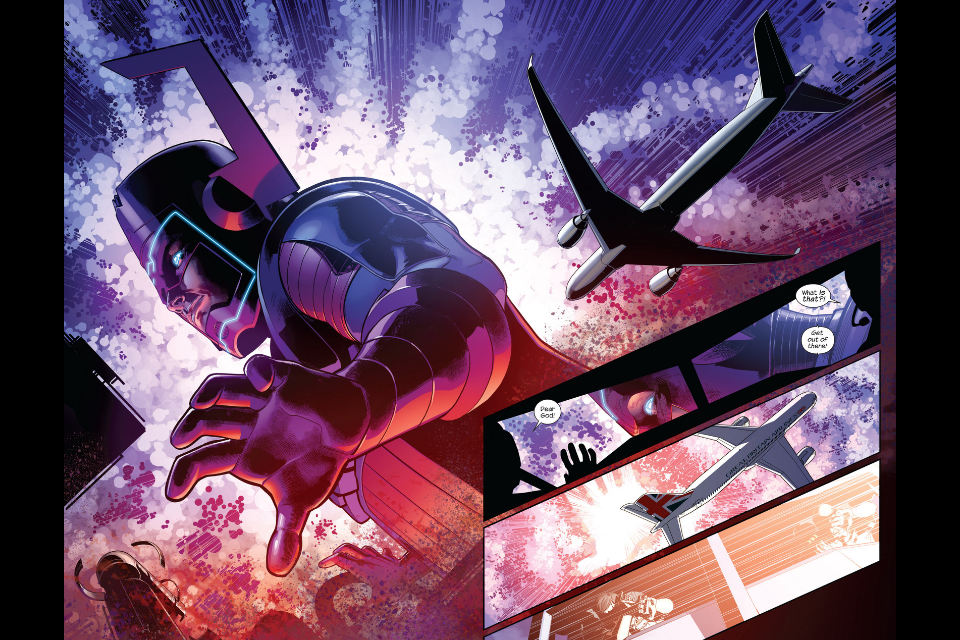