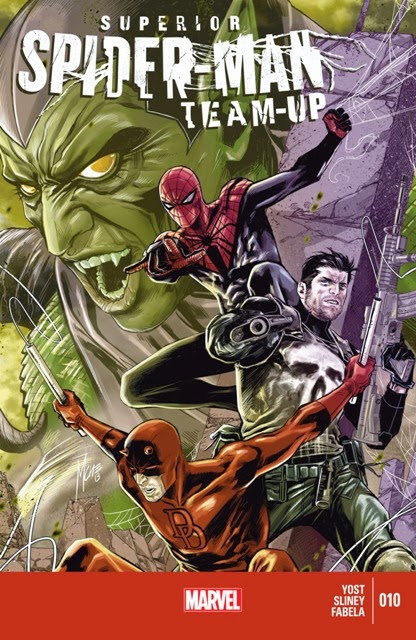 This issue begins with a flashback to when Otto Octavius was young and betrayed by two friends who pretended to be his friends, but bullied him later in front of the whole school. ( That is pretty harsh)

As a defense mechanism, Otto would go to his room where he felt safe and read his books. As he grew, he recalls how he swapped that desire for security with feelings of power and revenge.

Coming back to real time, our Superior Spider-Man is feeling mighty betrayed, having his army or spider henchmen turn against him. Shaken by the events, he is unable to fight properly and makes it out of the battle only with the help of Daredevil.

Spider-Man however, refuses to trust anyone after the events that had just taken place. Daredevil advises Spider-Man that they have to work together if they want to make it out of the situation alive. It is quite comical how daredevil, the blind guy is busy guiding both Spider-Man and the Punisher, who is also blind at the moment. Punisher however, like Daredevil almost has no need of his eyesight.

Spider-Man, eventually sort of works together without saying so. He concludes that the henchmen they are fighting are not his actual patrol, but imposters, disguised as his patrol. Daredevil tries to get Spider-Man to call his patrol for back up. Spidey tries but is unable to as all the frequencies are blocked. Just then, Punisher hears his glider coming. For a moment it seems as though Punisher was going to kill Spider-Man for lying about not stealing his glider, even though Spider-Man swears against doing it. We later find out however that the Punisher was banking on Spider-Man to dodge his bullet to hit the rider of his glider, using his as a camouflage for his shot. 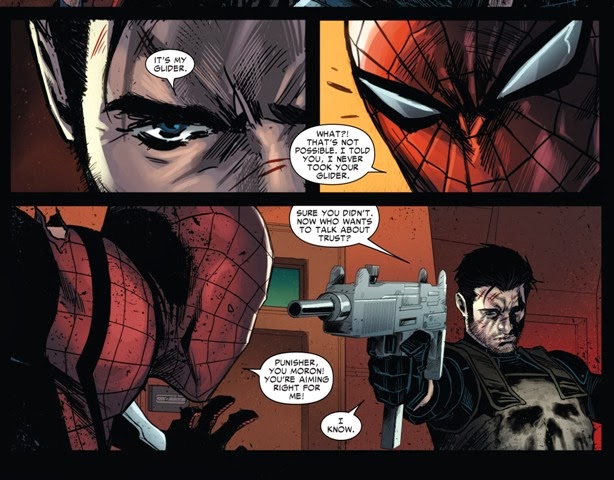 By the time Punisher gets his glider back, he has regained his eyesight. Punisher takes out the big guns in the room, but they are still terribly outnumbered. Daredevil tells Spider-Man to use his self destruct system. While initially refusing, he eventually pulls the lever, flooding the place with ocean water, and destroying all his equipment that he had spent so long making. 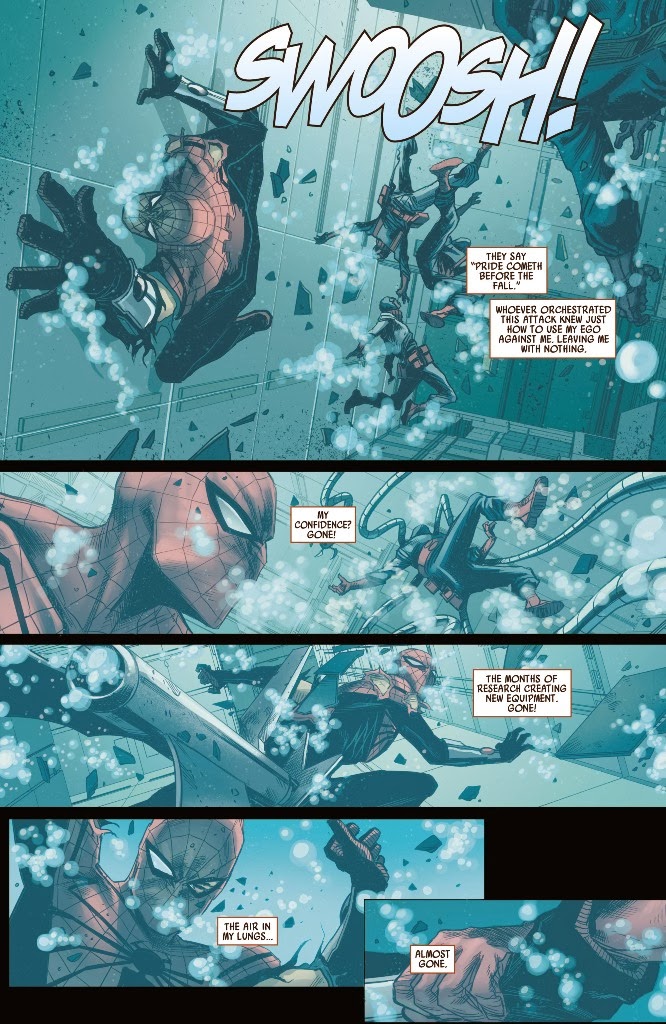 In the aftermath, Spider-Man wonders who could be behind this attack, placing his suspicions on Daredevil and Punisher even. He later realizes however that it was neither, but an old enemy of the real Spider-Man, who would place such a well planned personal attack when he sees a tattoo of the Green Goblin on one of the dead 'henchmen!'

This was a rather enjoyable issue. While there was a lot more that could have been done with this story, the actual result was a rushed story that wasn't very necessary for the Goblin Nation story line. In this issue, the most notable event that took place was the destruction of the Superior Spider-Man's equipment, which we will not miss because, first of all, as a reader, I had no idea that the equipment was so difficult to build seeing that Spider Ock built it... really quickly.

Also, there is nothing that was lost that he couldn't simply build again given the time. Having said that, I can relate as all that equipment probably also held some sentimental value to him because of the hours he put into it. As such, this attack was truly a 'personal' one, which eventually led to his suspicion about the Green Goblin being behind the attack.

I'm glad that Punisher got his eyesight back in this one issue. For a moment, in the last issue, I thought it might be permanent blindness. Also, during the scene where Punisher had Spider-Man at gun point, Spider-Man should have known that the Punisher trusted him. After all, if Spider-Man was lying in the first issue, Daredevil would have heard the change in heart rate immediately.