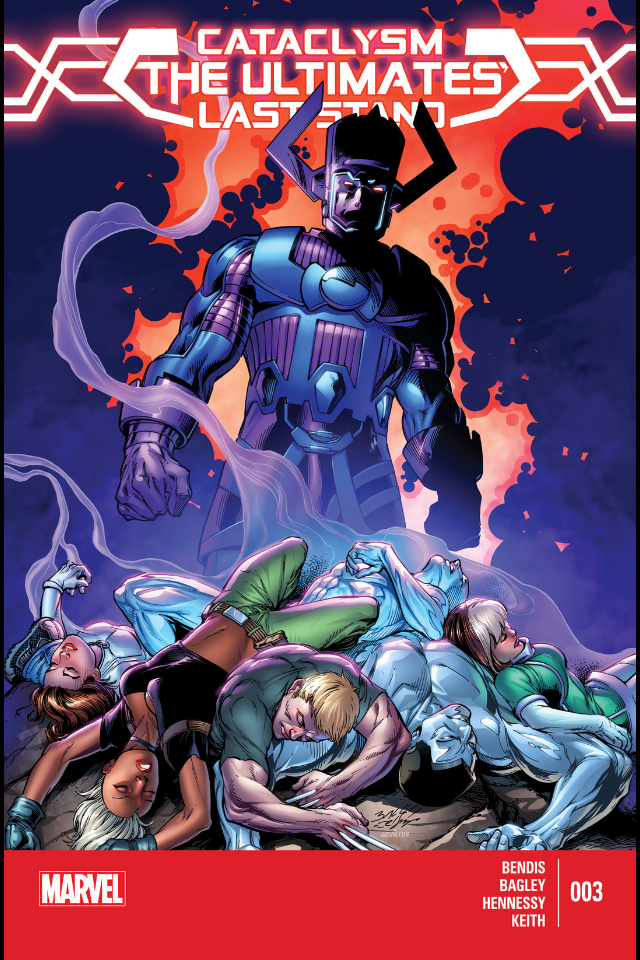 Hello everybody and welcome to my review of Cataclysm: The Ultimates Last Stand #3. Wait, how come the X-Men are on the cover, they aren't in this issue? 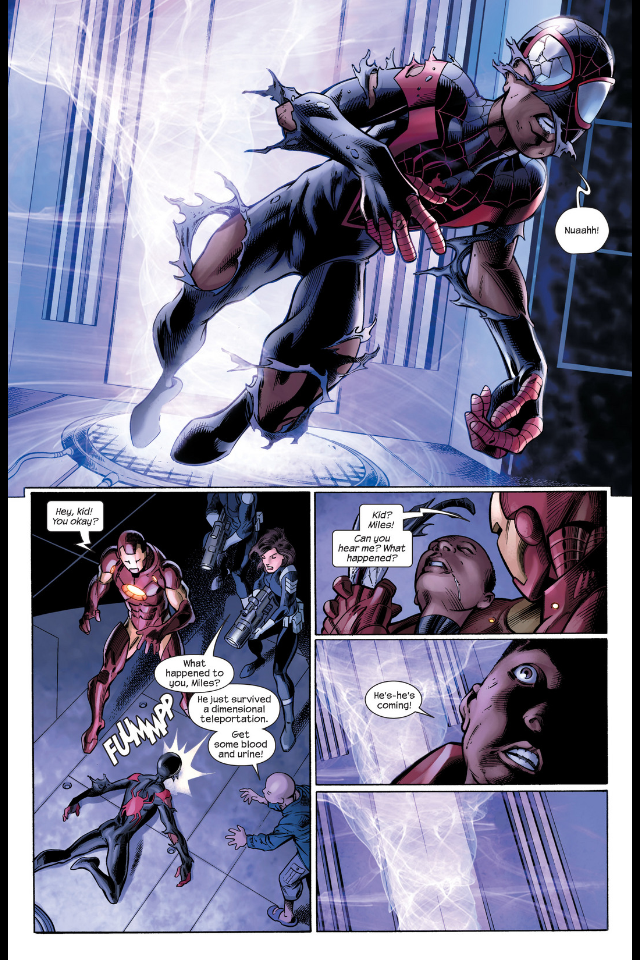 Director Monica Chang keeps her gun trained on the inter dimensional portal, along with several S.H.I.E.L.D agents. She answers Iron Man's question of why saying they just sent the "worst person in the world to another Earth", though Stark points out that they also sent one of the best. Suddenly Spider-Man emerges from the portal, with his costume in tatters. He collapses to the floor and tells Iron Man "he's coming".

Flashing back twenty five minutes ago, Susan Storm is still somewhat reluctant to let her ex-husband Reed Richards through the portal. She even uses her powers to choke him when he tries to remind her that time is of the essence. Realising that the Ultimates have too much bad history with Reed to work with him, Tony takes Miles outside for a private chat, where he gives him a piece of his own repulsor system to use on Richards if he does anything suspicious, asking him if he can do this as "this is everything". Miles clearly answers yes because the pair then fly back in with Stark asking if they're ready. He orders the Ultimates present to return to the streets to help people, despite Sue's protestation, while Chang orders a back-up platoon of S.H.I.E.L.D agents to the room. Miles Morales and Reed Richards then enter the portal and arrive in the Marvel Universe. 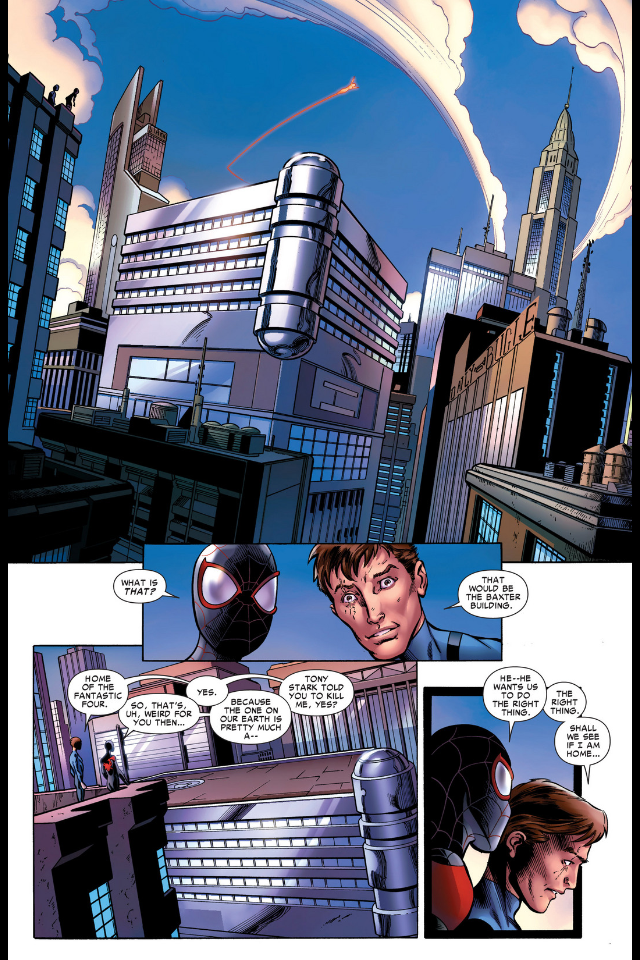 As it happens, the portal conveniently came out right by the Baxter Building, which must be weird for Reed as Miles notes as the one in their world is practically a crater. Reed responds by asking if Tony Stark asked Miles to kill him. Miles simply answers that Stark wants them to do the right thing. As the two approach the entrance of the Baxter Building, Miles is incapacitated by the security systems zero-point energy bubble field. Reed however, orders the computer to release Spider-Man after it scans and recognises him, making sure to point out to Miles that this was the perfect opportunity to get rid of him. As the pair enter (deducing that the Richards of this world can't be home as he'd have deactivated the security system himself), Reed spies a family portrait of the Fantastic Four, including Franklin and Valeria, his children with Sue in this reality. Clearly haunted by this, Reed moves on with Miles to his other selves laboratory, which he note with fascination is in the exact same place in the building as his was. 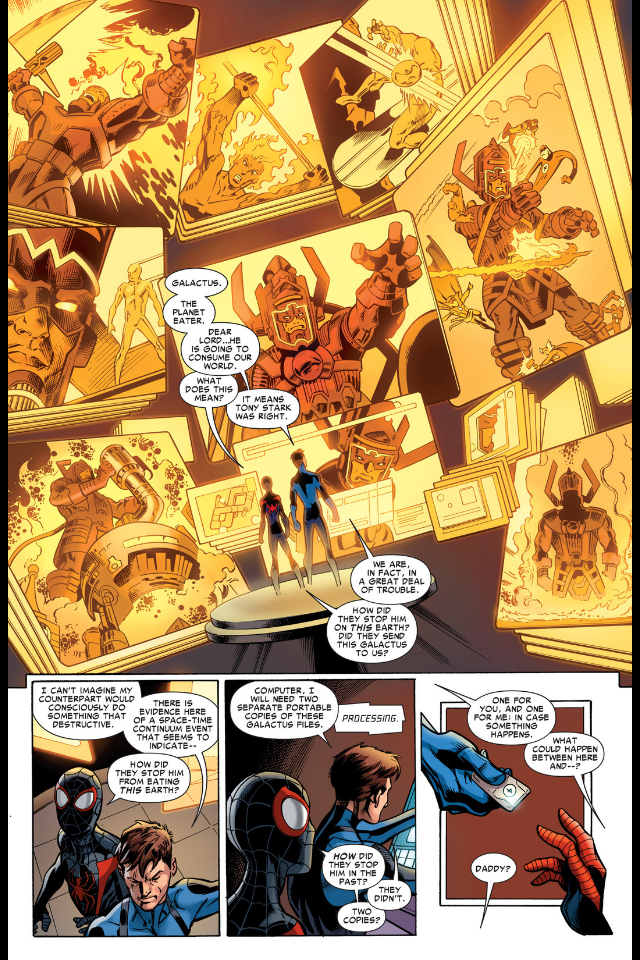 After gaining entry via a DNA scan from Reed, he and Spider-Man access Mr Fantastic's files on Galactus through voice recognition, learning to their horror that he is planning to consume their Earth. Reed has the computer make him two portable copies of the data, one for Miles and one for him, in case something happens. Well something does happen right then, namely Valeria (holding a Spider-Ham doll) wandering into the room and mistaking Ultimate Reed for her actual father. Upon recognising that this is not her dad (owing to the large scar around his eye), she activates the security override (codeword: franklinisatool). Reed urges Miles to take the data and go, which he does, only to be pursued by several versions of H.E.R.B.I.E as he bursts out of the Baxter building. With his costume now torn from their lasers, he gets ahead of the robots and hides from them. At that very moment, the "Superior Spider-Man" happens to swing by and is mistaken for the intruder, which causes the H.E.R.B.I.E's to start shooting at him (it's not like he doesn't deserve it), leaving Miles free to head back to the portal whilst muttering how sorry he is (you've nothing to be sorry about kid).

Back in the present, Reed emerges back into the Ultimate Universe unscathed, giving the Ultimates the basics on who Galactus is and what he plans to do. Director Chang suggests that they send him back to his own universe, but Captain America refuses to entertain the thought, bluntly stating that they'll stop it. Sue meanwhile, asks Reed what he saw in the other universe. Reed replies that he saw their daughter, describing her as fierce and beautiful. With tears in his eyes, he tells Sue how sorry he is, not only for everything he's done before, but also that it took him this long "to see how beautiful the world is"... 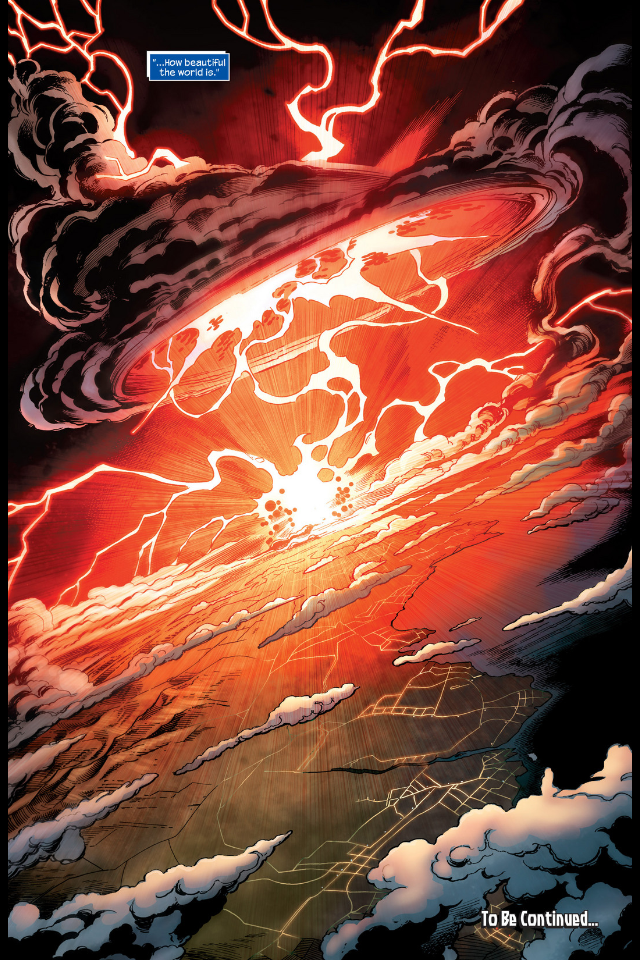 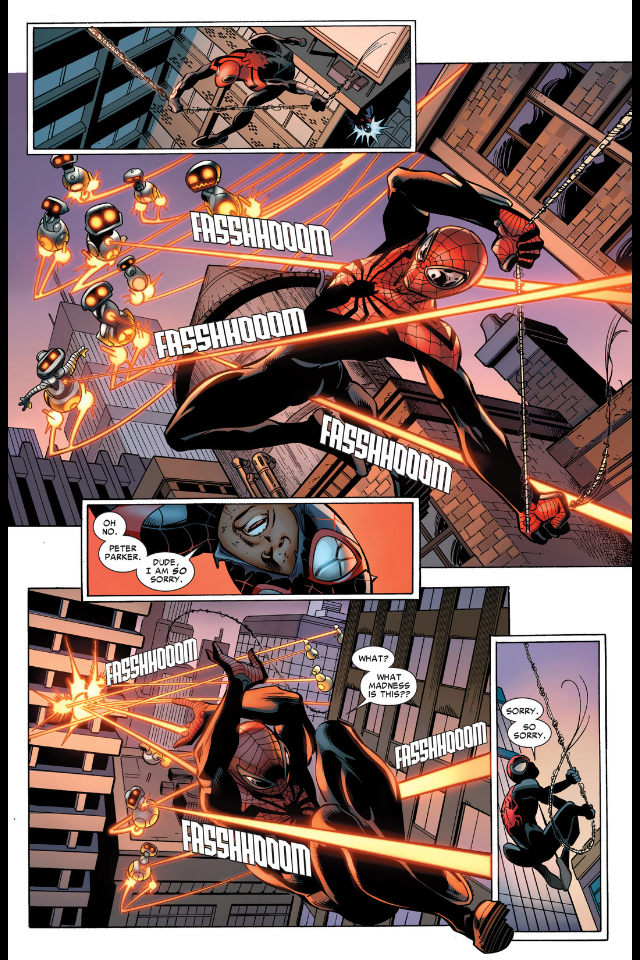 One of the most hyped things about this series was the fact that Miles Morales would visit the mainstream Marvel Universe, which led to rampant speculation on whether or not he would wind up stranded there, similar to Spider-Man 2099, and perhaps even defeat Otto Octavius and succeed him as the new Spider-Man of that universe. Of course, now that Peter Parker has been confirmed to return as the Amazing Spider-Man in April (YAY!) We know there's no chance of that happening, though it would have been a rather interesting idea to explore. Unfortunately, the visit to 616 is perhaps the most disappointing aspect of this series so far. While Reed Richards benefits greatly from the visit, it's mostly a missed opportunity.

For starters, Reed and Miles don't spend nearly enough time there, which is annoying given that this issue opens with a pointless flash-forward to Miles coming out of the portal. It would have been nice if they'd had time to explore a little more, and perhaps Miles could have been able to get a brief glimpse of what his life is like here (since we know from #5 of Spider-Men that he does indeed exist in the 616 universe). Then again, Bendis has confirmed a sequel series to Spider-Men, so maybe he's saving the reveal of 616 Miles for that. The Superior Spider-Man cameo was pretty funny though, even more so since Bendis only gives him one line of dialogue. 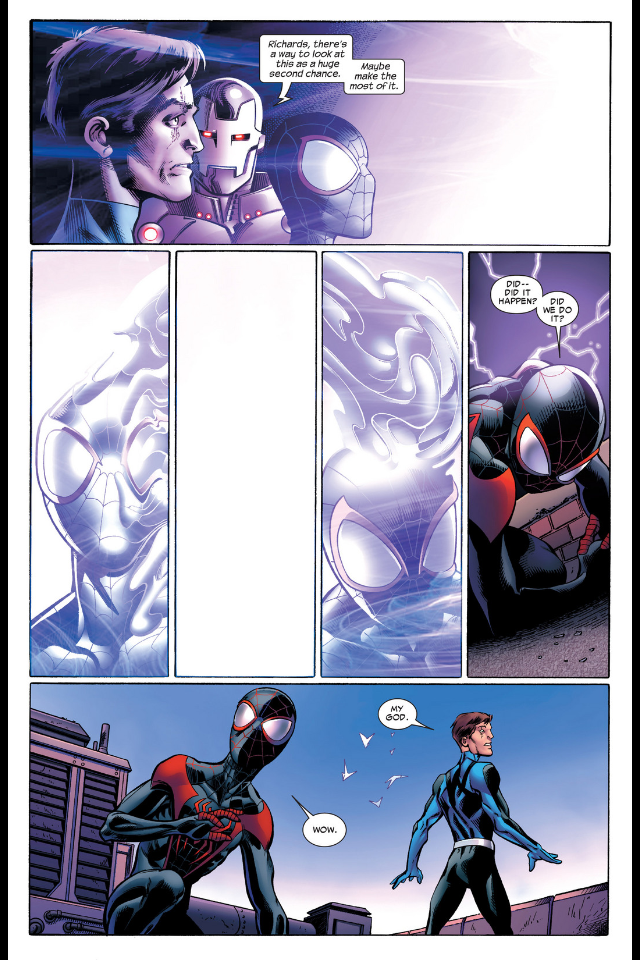 This isn't a total waste of a journey though. Like I mentioned earlier, Reed goes through a swift, but effective character arc in this issue. I particularly liked the moment when he sees the Fantastic Four family portrait. His pensive expression speaks volumes. The encounter with Valeria also worked, though I'd have preferred to have seen Reed speak to her inbetween Miles' escape from the H.E.R.B.I.E's. His final line to Sue, as well as being quite touching, is interesting since it perhaps suggests that Reed will sacrifice himself to stop Galactus, or maybe even reunite with Sue, though I could be wrong. The whole thing may even turn out to be a trick on his part so he can somehow steal Galactus' power like Doctor Doom did in Secret Wars (hopefully not), but of course, this is all just speculation on my part.

I actually like that the notion of sending Galactus back to his home dimension is quickly brushed aside instead of being used to create a moral dilemma. There's enough going on in the story already without adding that needless complication, though I don't think that Galactus is likely to remain in the Ultimate Universe following the conclusion of this series.

Mark Bagley did a very good job as usual. All the key moments I mentioned previously work as well as they do thanks to his artwork, as well as the scene between Spider-Man & Iron Man, which was rendered and angled brilliantly, particularly the first and penultimate frames. The reveal of the 616 universe bugged me a little though since the opening shot, while the buildings all looked great, was pretty empty apart from the lone female hero streaking through the sky (I think it was Spectrum?). I'd personally have preferred to see a few more heroes in the image since it would have once again demonstrated how rich the mainstream Marvel U is with heroes and beings in general, whereas the Ultimate Universe is an almost desolate place, though make no mistake, this is only a nitpick. It was a nice touch again to the see the lettering style change during the scenes in 616. While the trip to the Marvel Universe wasn't as fulfilling as expected, there was still some good character progression made here with Reed and the artwork on the whole was excellent, making this another entertaining, if somewhat disappointing issue... 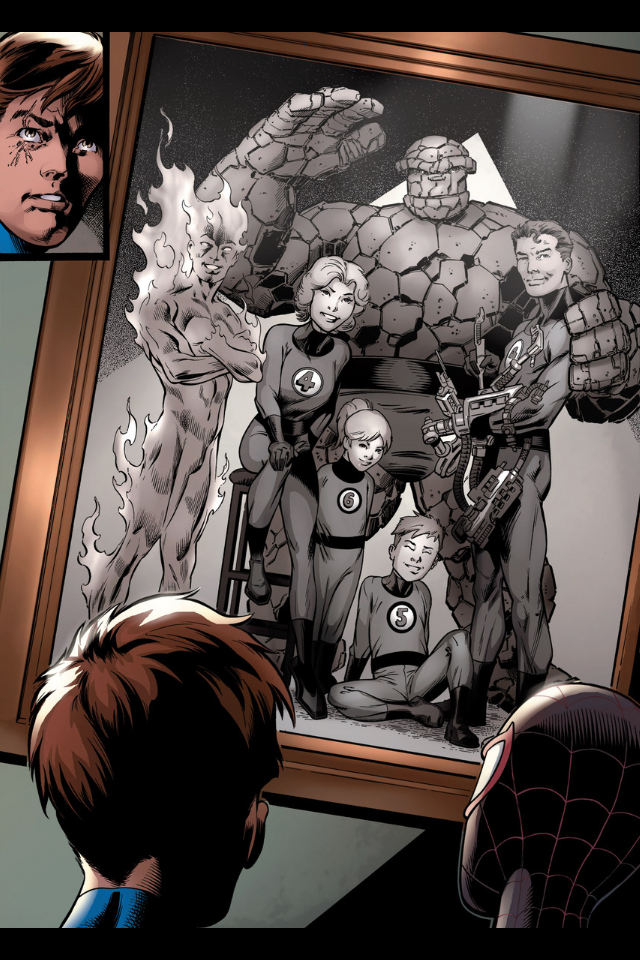