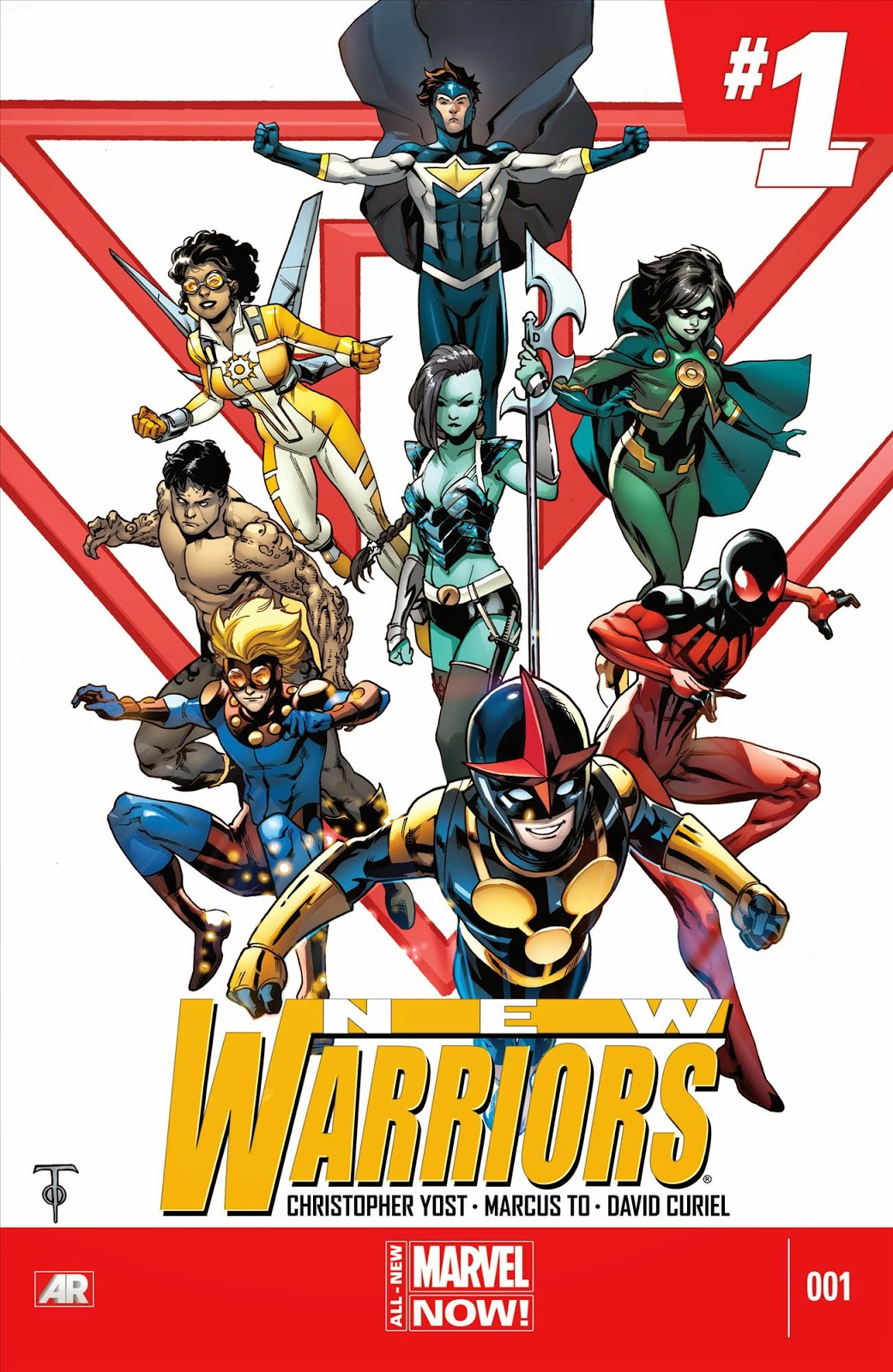 I'm sure I wasn't alone in feeling a bit sad when Marvel endedScarlet Spider a few months ago, especially since it was regarded, along with Venom, as one of the better Spider-Man spin-off titles in some time. But it seemed there was a some hope on the horizon, in that not only was Chris Yost continuing Kaine and Aracely adventures, but that they would be part of the latest incarnation of a 1990's favorite, New Warriors. So now that the first issue of the fifth volume of New Warriors has debuted, how does it measure up? And do our favorite Spidey clone and Aztec demigod sidekick make for a decent fit? Or do we wish that Scarlet Spider was still ongoing?

THE STORY
We open to see Bova Ayrshire bleeding and crawling his way across a floor, past other bodies of his fellow New Men. He asks why the person killing them is doing this, and figure answers, “So that humanity can survive.” When Bova asks what they did wrong, he's told that they did nothing wrong, but that the New Men were “never supposed to be,” and thus “judgment comes even for the innocent.” Then the figure points his weapon, ready to fire.

The scene then shifts to New Salem, Colorado, where Vance Astro, aka Justice, and Robbie Baldwin, aka Speedball, are engaged in a battle with Salem's Seven. Speedball is going through a list of potential battle cries for the New Warriors, but Justice tells him to shut up, especially since it's only the two of them. Speedball, however, counters there's also Kid Nova, but also wonders where he is. The leader of Salem's Seven, Vertigo, uses her powers to make Justice dizzy and fall to his knees. Justice, however, creates a telekinetic blast that flings everyone around him away. Thronn of the Salem's Seven says Justice and Speedball shouldn't have attacked New Salem. Justice, however, says they were just passing through when the Salem's Seven attacked them. To which Vertigo says the Salem's Seven are the guardians of the town and that Speedball instigated the fight by attacking Bruticus. And after Justice gives him an accusatory look, Speedball sheepishly admits that Vertigo is right, that while Justice was in the 7-11, he attacked Bruticus because he assumed he was a bad guy based on his appearance and “mistakes were made.” 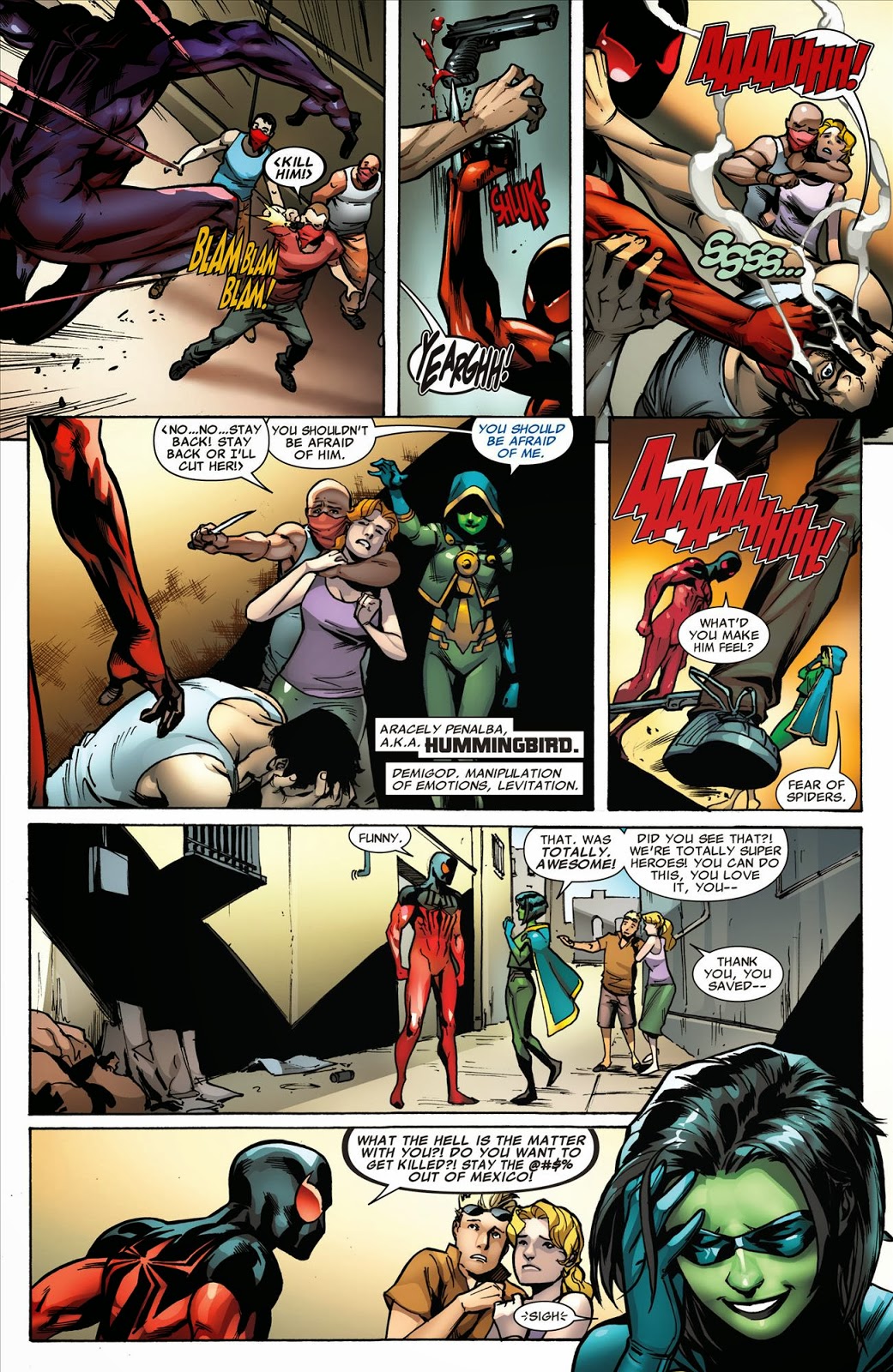 We then go to Mazatlan, Mexico, were we see Kaine and Aracely shopping for supplies--the very same scene from Scarlet Spider#25, including the dialog. At the moment where Kaine and Aracely pass the tourist couple being mugged, and Aracely begs Kaine to help them, we then see what happens afterward. As the muggers knock down the man and threaten his girlfriend, up above they hear someone say, “Bueno idiotas...” It's Kaine, dressed as the Scarlet Spider. He leaps down, stabbing one of the muggers in his wrist to make him drop his gun, and uses the “Mark of Kaine” on another. The remaining mugger attempts to use the female tourist as a human shield, when Aracely, dressed as Hummingbird, emerges from the shadows. She uses her powers to give the mugger arachnophobia, and the mugger flees in terror. Aracely says how what they did was “totally awesome” and that they should be super-heroes. The couple tries to thank Kaine, except he yells at them, saying they could have been killed and that they should “stay the @#$% out of Mexico!”

In New York, we see Selah Burke, aka Sungirl, stop armored car robbery with her wrist lasers. Then after checking to see if the robber is okay and gives him a warning, she flies off, listening to her police scanner for more potential crimes to bust. She picks up a report of a disturbance in Grand Central Terminal, and then sees an explosion from a subway entrance. 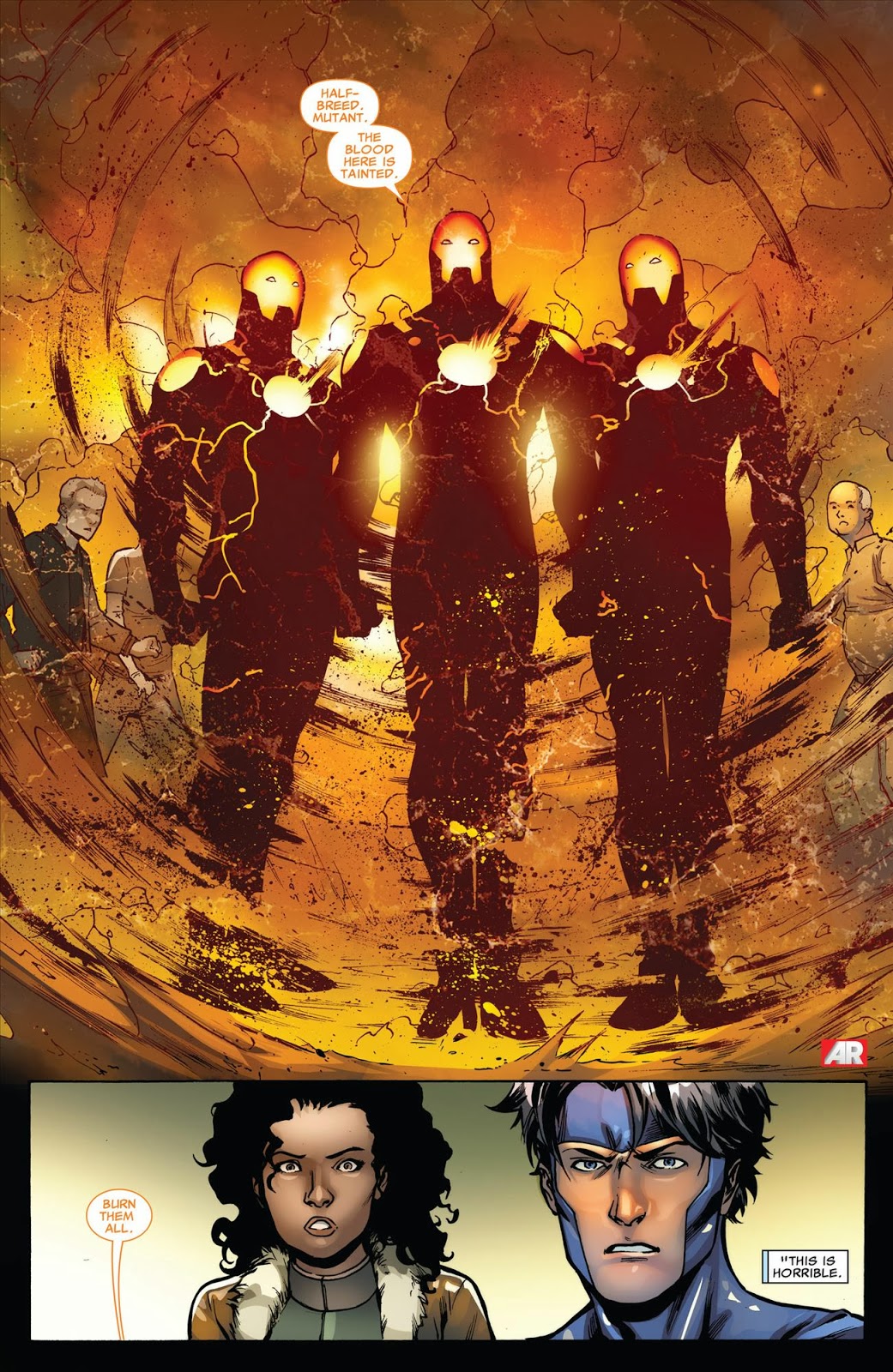 Back in New Salem, Speedball and Bruticus are playing video games, while Vertigo shows Justice around town. Justice tells Vertigo that he's read the Avengers file on New Salem, and how it's a town of magicians and magic users, and that the Salem's Seven are the children of the Devil (technically, there dad is Nicholas Scratch, but same difference). Vertigo says that she and the other members of the Seven have reformed and trying to change for the better. They've also, with the help of Dr. Strange, made the town a safe haven for anyone born of magic. She then asks Justice if he and Speedball are really trying to reform the New Warriors in New Salem. Justice, however, states that even though the New Warriors saved the world a few times, the New Warriors are now synonymous with the destruction of Stamford, Connecticut, which kicked off Civil War. He also says that, because the world is protected by the Avengers, he's not sure if there's really a place for the New Warriors anymore. Vertigo says she understands what its like to be an outcast, and Justice compliments her and the Salem's Seven, when a miniature wormhole opens, out from which emerge three Evolutionaries. They state that because there's a “half-breed mutant,” the town of New Salem is “contaminated” and thus declare they will "burn them all."

Over in Mexico, Kaine and Aracely are at the beach, again like they were in Scarlet Spider #25. Aracely says that, because she's read Kaine's thought, she knows he isn't really happy with the way things have turned out. Kaine states that for all of his life, he was dying from clone degeneration, but having been given a second chance, he's not going to throw it away again. He then says that he tried to be hero and it only resulted in everyone he cared about nearly getting killed. Thus he's content to life with his “feet in the sand, drink in hand.” Aracely says that not only is that boring, but that they have a responsibility. To which Kaine says that's Spider-Man, not him, and as his clone, his motto is “all the power, none of the responsibility.”
It's at this point, Aracely notes that the ocean looks red in the light. However, Kaine realizes the water is not red from the sun but from blood, as several bodies of Atlanteans float to the surface. However, there is one who is alive, carrying a electrified staff. She identifies herself as “Faira Sar Namora of Atlantis,” and that she “seeks heroes.” 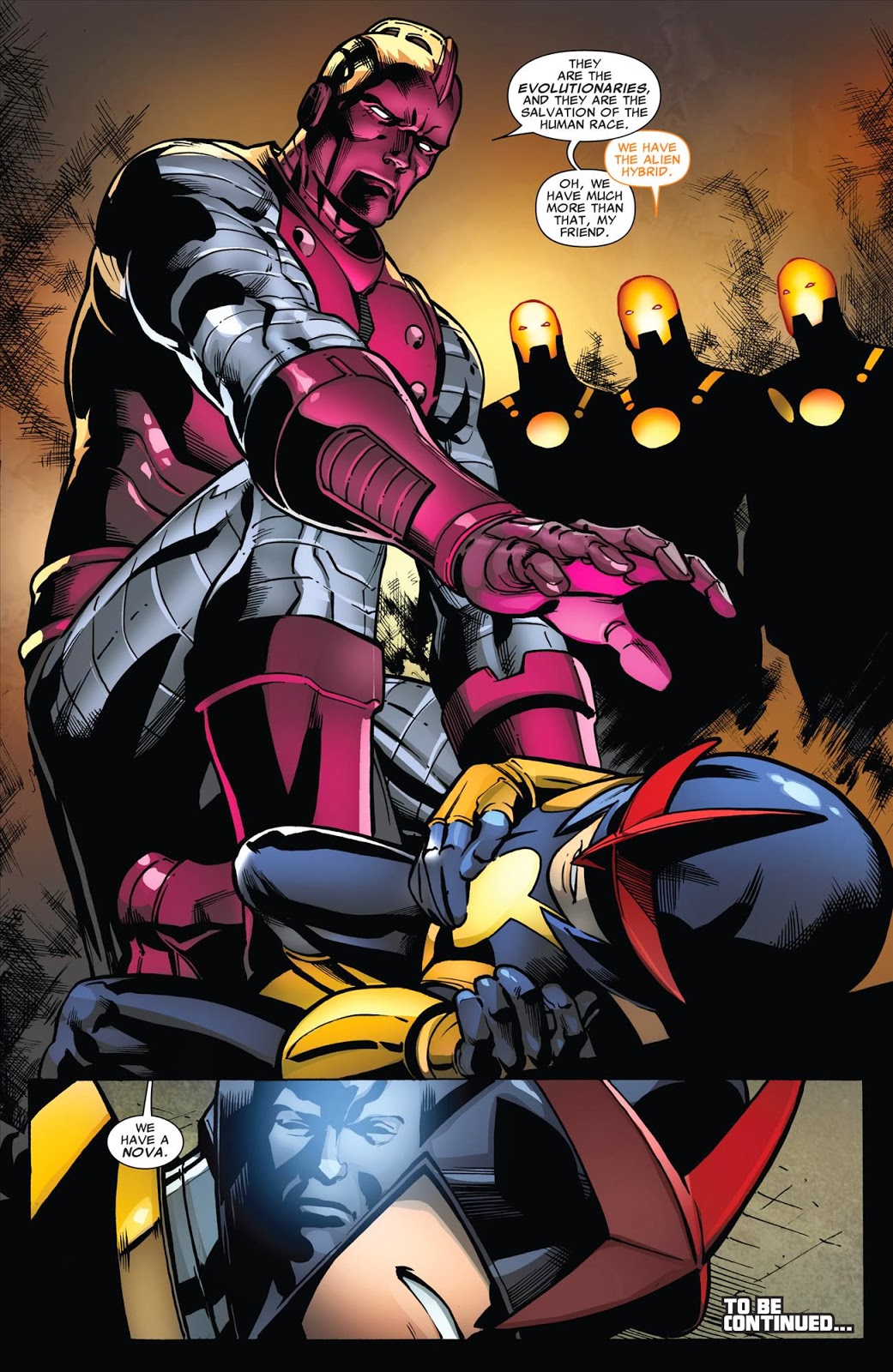 In New York, Sun Girl goes down into the subway to investigate the explosion and to see if there are any survivors. She finds a gaping hole in one of the subway tracks, and enters it. She then follows the tunnel below until she hears a commotion. There she finds Evolutionaries are attacking the Morlocks.

In Albuquerque, New Mexico, Sam Alexander, aka Nova, is fighting with an alien who is attempting to steal technology confiscated from Thanos after Infinity, vowing that both Earth and the Wraithworld will be his. Nova blasts him into some crates, only to then see a frightened little boy. Nova attempts to apologize, saying that the boy looked like a “gross alien monster,” only to realize too late it's a ruse by the alien as he is a shapeshifter. However, just as the alien is about to finish off Nova, it gets blasted by Evolutionaries. Nova introduces himself, wanting to thank them for saving him, when he, in turn, gets shot...by the High Evolutionary. To be continued...


THOUGHTS
I admit, I've always had a soft spot for the New Warriors, especially the original run by Fabian Nicieza and Mark Bagley. Granted, the concept wasn't all that original, as the team was a mix between DC Comic's Teen Titans and Batman and the Outsiders (especially since the leader, Night Trasher, was all-too obvious Batman expy) but it still fun, with great chemistry between the teammates, and how it used their low-ranking status as heroes compared to the likes of the Avengers and the X-Men to the series' advantage. So it's nice to see Marvel decide to give the New Warriors another shot.

That being said, I found the first issue merely okay. Not bad by any means, but not really great either. Part of this has to do with Chris Yost's script, which feels very paint-by-the-numbers. We see what each of the individual heroes are up to before they're attacked by the main villain, which of course means they will eventually meet each other, realize they have a common enemy, and team-up to stop said common enemy—a very predictable and standard beginning for a team book. Another potential problem is that while the series is appealing for the nostalgia of the original series, the only founding members left are Vance Astro and Speedball, as the original Nova has been killed off and replaced, Firestar is now with the X-Men, and Namorita and Night Trasher, as we're reminded in this issue, died in Civil War. The rest of the comic appears to be a vehicle for characters from other series Yost wrote for, specifically Sun Girl from Superior Spider-Man Team-Up (who comes rather generic in this issue) and, of course, Scarlet Spider. After all, if you're going to have a book called New Warriors, why not actually have them? 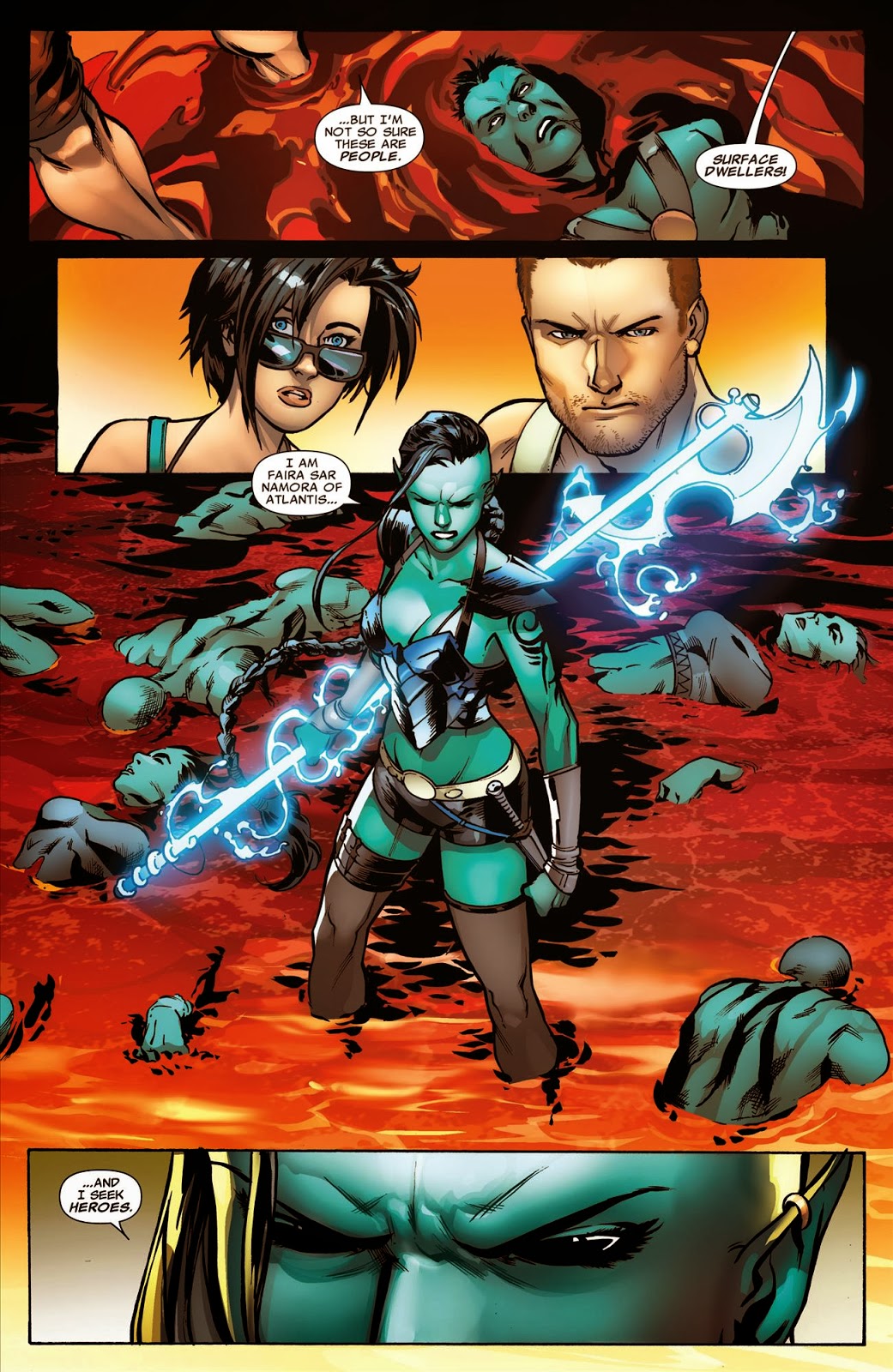 However, it was great to see Kaine and Aracely again. Even though their scenes were nothing more than “extended cuts” from Scarlet Spider #25, it still is a reminder of why their partnership, with their contrasting personalities and humorous exchanges, was always so fantastic. The scene of Kaine cussing out the tourists after saving their lives was far and away the best moment of the issue, and it's just so bittersweet that Kaine no longer has a regular series of his own anymore. The other plus was seeing the return of Salem's Seven recast as villains-turned-heroes, and I couldn't help but think that I'd want to read series about this group, especially since Marvel hasn't really built-up their staple of supernatural heroes in recent years. I also liked the art by Marcus To in places. There are moments where, just like Yost's script, it feels only serviceable, but when you see things like the Evolutionaries' arrival in New Salem or the introduction of Faira Sar Namora, it looks terrific and vibrant, and shows he has genuine talent.

All-in-all, I'd say, based on the first issue, the series is mainly for curiosity-seekers and for fans of Kaine and Aracely who can't get enough of them. Here's hoping that, now that the set-up is out-of-the-way, subsequent issues will start to hit its stride.
Read More
Newer Posts Older Posts Home