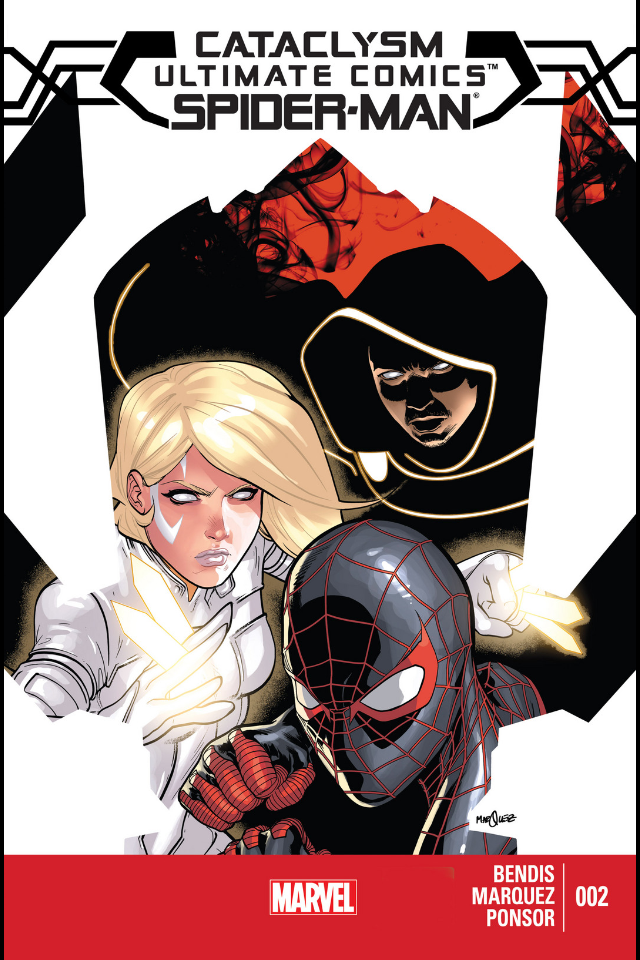 Hello everybody and welcome to my review of Cataclysm: Ultimate Comics: Spider-Man #2. 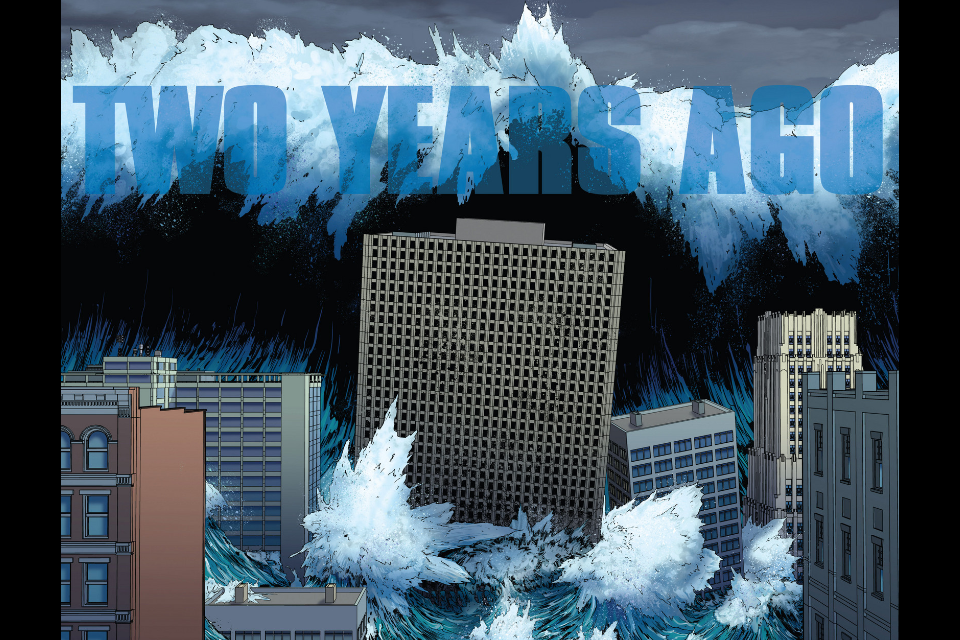 This issue opens with a flashback to the events of Ultimatum (*shudder*), showing where both Tandy Bowen and Miles Morales where at the time of this catastrophe (in more ways than one). Tandy was at the heart of the destruction and witnessed the original Spider-Man, Peter Parker, saving civilians. She wanted to help people too, but her mother insists that they go, saying that they have to help themselves, which angers Tandy. Miles meanwhile was with his family in the car, which was being held up on the motorway since everyone was trying to get out of the city. His dad soon loses his temper and condemns the mutant race, calling them freaks and says to Miles "if you were one of them..." before trailing off (Ever heard of the phrase, "keep it to yourself" dude).

In the present day, Tandy, as Dagger, has her boyfriend Ty, aka Cloak, teleport them to New Jersey, right in front of Galactus' face, where she hurls a handful of her light daggers at him. Unsurprisingly, these have no effect. Cloak manages to teleport them away before they are faced with Galactus' wrath. Having realised that they are no match for the threat, Tandy decides that they should get as many people out of danger as they can, starting with an injured young woman and an older onlooker, who Ty teleports to the hospital. 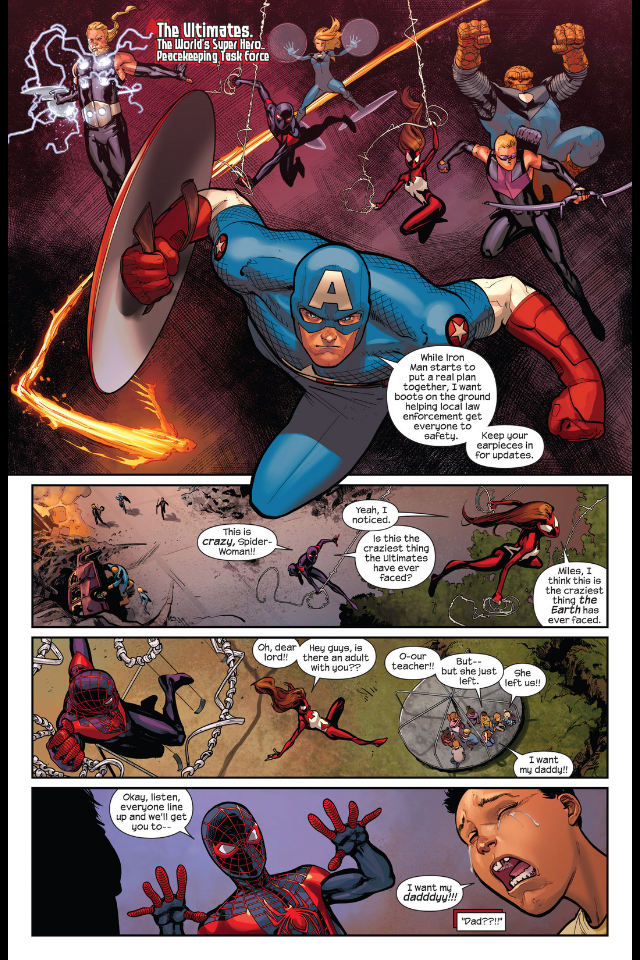 Meanwhile, the Ultimates and Spider-Man take to the streets to also rescue as many civilians as possible. Miles and Jessica peel off from the rest, finding a group of abandoned children by a roundabout, who are crying for their parents.

While all this is going on, Lana Baumgartner is strolling down the street listening to music, completely oblivious to the chaos unfolding around her. She's stopped however by her recently ex-boyfriend, Sid, who was running in the opposite direction when he saw her. Just as he's telling her about the giant purple man however, Sid is flattened by debris from Galactus. Lana clears the rubble of him with her powers, though she's too late to save him. Clearly upset at his death, Lana launches herself onto a nearby rooftop to get a better look at the action and suits up as Bombshell.

She spots Miles and Jessica with the kids and joins them, though Miles heads off as soon as she arrives so he can find the dad of one of the kids. Lana then notices a handful of masked men looting a shop. She lands in front of one of them and demands they put the stuff back, but the man just says "to hell with you" since he believes the worlds coming to an end and therefore, all bets are off, though he does compliment Lana on her costume. She thanks him before immobilizing him with her powers, which convinces the other men to drop the stuff and run. Spider-Woman then arrives and tells Bombshell "nicely done". When she learns that this is probably the first real thing Lana has done as a super hero, she tells her "it looks good on you".

Miles meanwhile has reunited the child with his father, who says to him that nothing is more important to a father than his son, and what he's done here is the most important thing. Clearly thinking on these words, Miles heads back to New York as fast as he can. He finds his dad just outside their home yelling for his son, though when Jefferson sees Spider-Man, he reacts with fear and distrust, telling him to get away. He is left stunned however when Spidey addresses him as "Dad" and unmasks himself, with Miles no longer willing to hide his secret identity from his father... 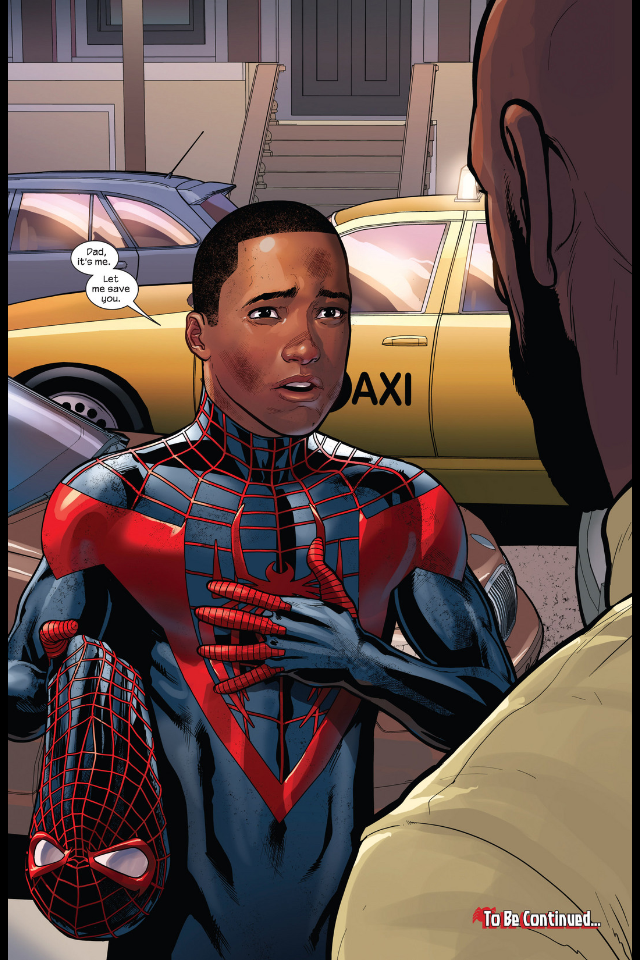 While the previous issue was more of a bridge between Ultimate Spider-Man & Cataclysm, this time we're in more standard tie-in territory, though thanks to Bendis, this still feels like natural progression and an essential part in the ongoing story of Miles Morales, rather than superfluous material like many tie-ins can sometimes come across as.

Miles' reveal of his secret identity to his father was quite unexpected, but it makes a lot of sense in this context. For all Miles knows, they could all die at the hands of Galactus, so a secret identity by this point is meaningless where his loved ones are concerned. The flashbacks to Ultimatum help to enforce the motivations of Miles and Tandy, and they are also way better to read than the actual event itself was. 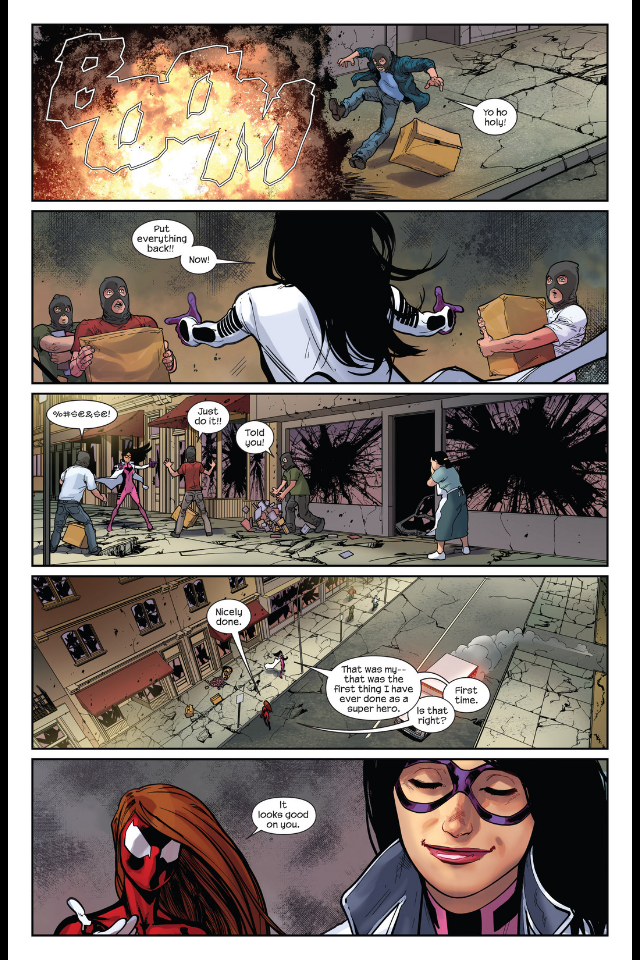 Bombshell gets a couple of solid, character building moments. The death of her ex-boyfriend in particular is very effective since in a way it's equivalent to the death of Uncle Ben. Sid died because Lana was consumed with self-pity about her present situation, to the point where she was shutting herself off from the world through her music, much like Peter was consumed with self-importance when he let the burglar who would later kill Uncle Ben escape, and like him, Lana is motivated by the death to use her powers for good. It's some good, subtle storytelling from Bendis.

David Marquez again does a very good job here, though there are a few instances of rushed artwork, as well as Sid having an incredibly bizarre looking facial expression. Thor and the Thing also have different outfits in this issue, which is inconsistent given that this issue takes place in the middle of Cataclysm #2. Regardless, Miles' story (as well as that of his new friends) is still a cracking good read... 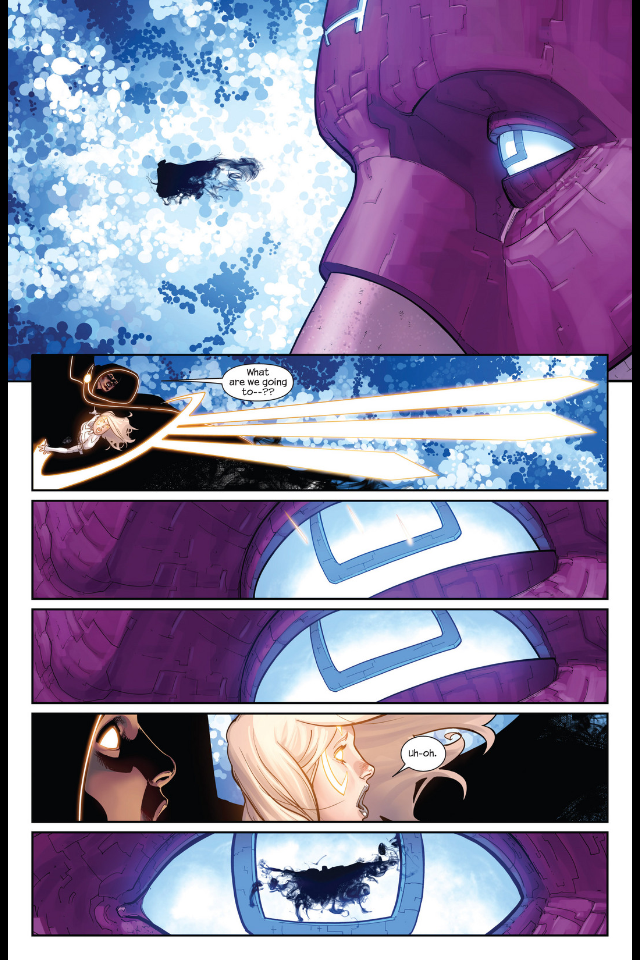