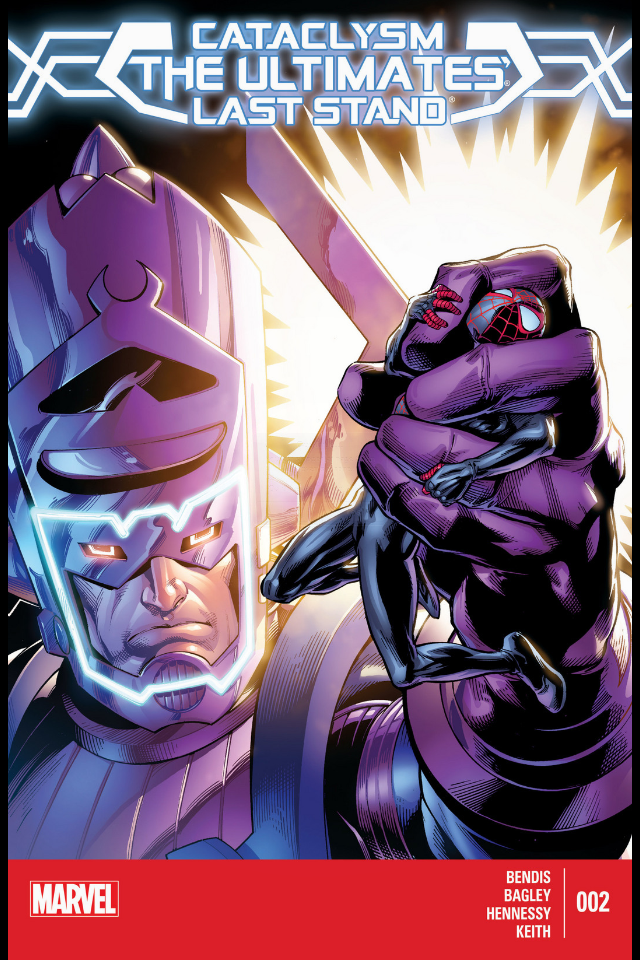 Hello everybody and welcome to my review of Cataclysm: The Ultimates Last Stand #2.

As Galactus constructs his planet devouring kit in what used to be New Jersey, Mile Morales is at a loss for what to do. At that moment a helicopter whooshes over his head, which Spidey takes as a sign. He fires a webline at the helicopter and learns what immediate regret feels like as it pulls him towards the giant purple man. 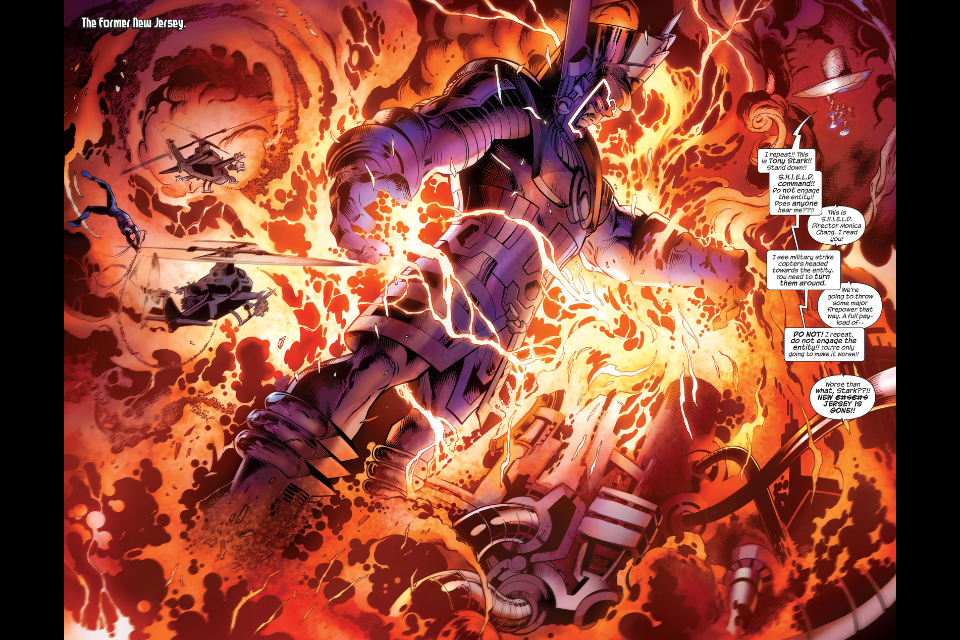 Iron Man meanwhile is trying to get Director Chang to call the choppers off as they'll only make things worse. She reluctantly complies, but as the helicopters pull away, Miles lets go, launching himself at Galactus and lands on one of the fins from his helmet. Galactus soon notices him and attempts to squish the human arachnid, but thankfully Thor comes to the rescue, re-joining the rest of the Ultimates with Miles.Cap orders Iron Man to the Helicarrier so he can come up with a plan, while the rest of the team, including Miles, take to the streets to rescue civilians. 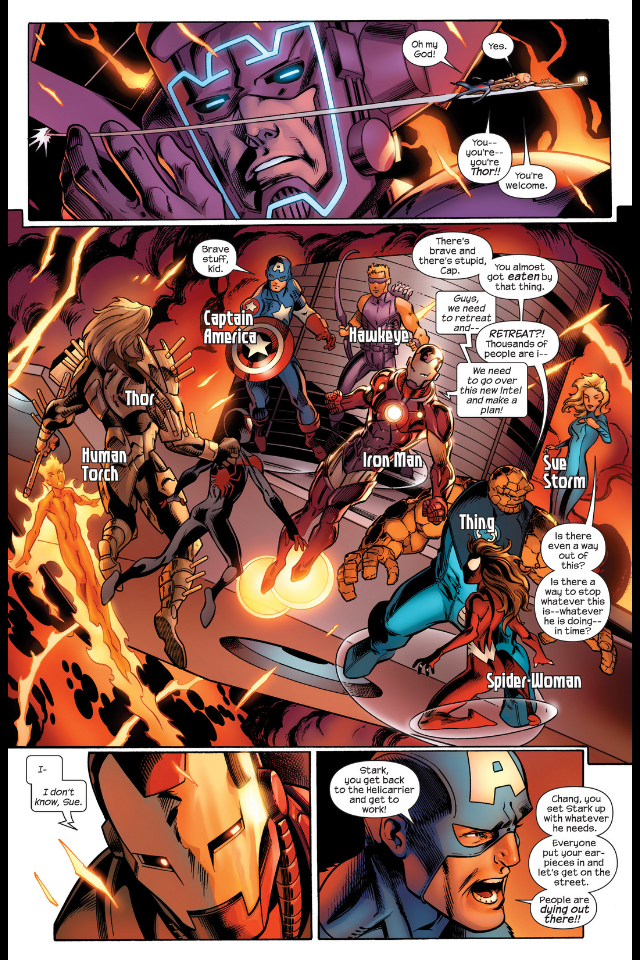 Once onboard, Stark details the events of Spider-Men to the Ultimates who weren't present for it, saying that Galactus matches the energy signature of the universe that the adult Peter Parker came through. He also discerns that the machine Galactus is constructing will bend the energies of the planet so as to consume them. After the Ultimates briefly argue about what to do with the entity (including sending Galactus back to his own dimension.) Sue Storm asks if there is anyone from 616 that they can talk to, giving Tony the idea to visit such a person. He confronts Quentin Beck, aka Mysterio, in his prison cell at the Cube, asking him if he knows of the cosmic being. Mysterio, while flattered that the Ultimates consider him in the same league as Galactus, tells them that Reed Richards was the one who saved his Earth from the Devourer of Worlds. 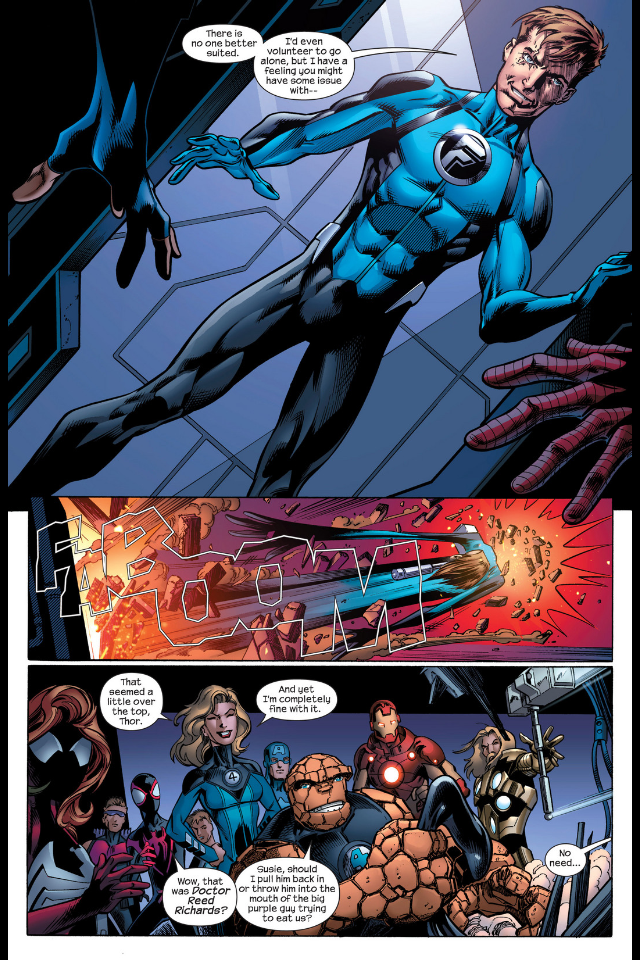 Soon after, the heroes examine Mysterio's portal to the 616 universe, which is now in S.H.I.E.L.D custody. A teenage boy suddenly bursts into the room, identifying himself as Doctor Amadeus Cho (In fact he has four doctorates!), the leading expert in interdimensional energy fields. Cho advises against Tony Stark's plan to enter the portal himself as his tech shouldn't even be in the room right now, which the others agree with, forcing Stark to concede. Miles then decides to volunteer as he previously went through the gateway when he and Peter fought Mysterio. Tony asks what he'll do if that worlds Reed Richards isn't home, to which a new voice responds that he will go with Miles. That voice turns out to be this worlds Reed Richards, though he doesn't get the welcome you'd expect of Mr Fantastic, receiving a face-full of hammer from Thor, which Sue is actually okay with. Once he recovers, Richards explains that since S.H.I.E.L.D files have confirmed that both versions of Peter Parker have the same DNA, irises and fingerprints, the same can be assumed of him and his other world counterpart, which means he could easily get into 616 Reed's lab and access any files on Galactus. Sue doesn't like the idea of letting Reed through the portal, labelling him a "diseased monster". Reed retorts that while they may have their differences, if they end up dead at the hands of Galactus, all of that will be pointless, adding that time is of the essence.

Elsewhere, on the island Utopia, the X-Men are watching a new report on the destruction of New Jersey by Galactus. Colossus thinks they should get involved, but Jean thinks otherwise, asking if the humans would do the same for mutants. Kitty Pride in turn asks if that really matters as the report continues, saying that it looks like the end of the world... 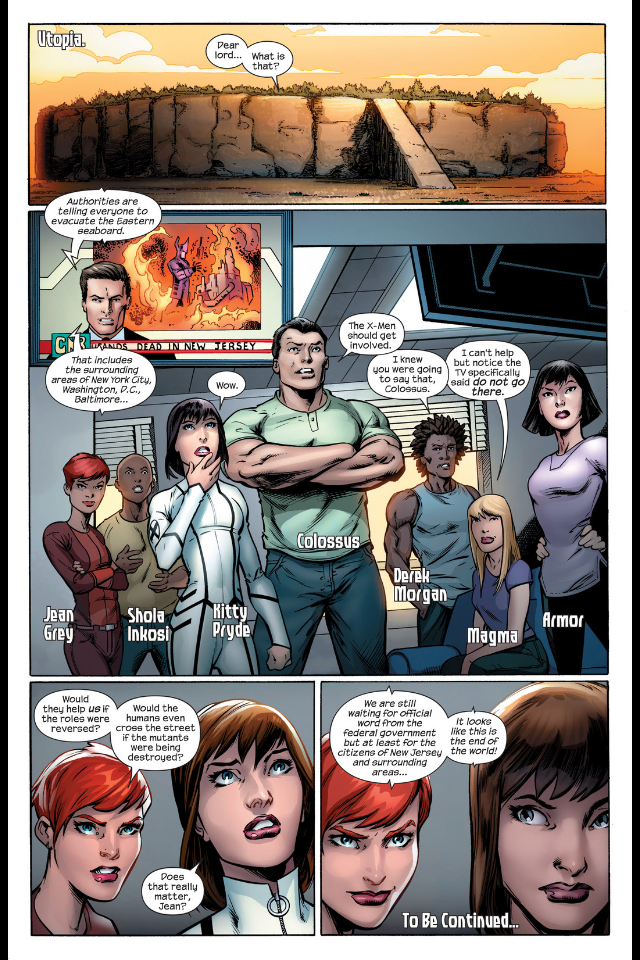 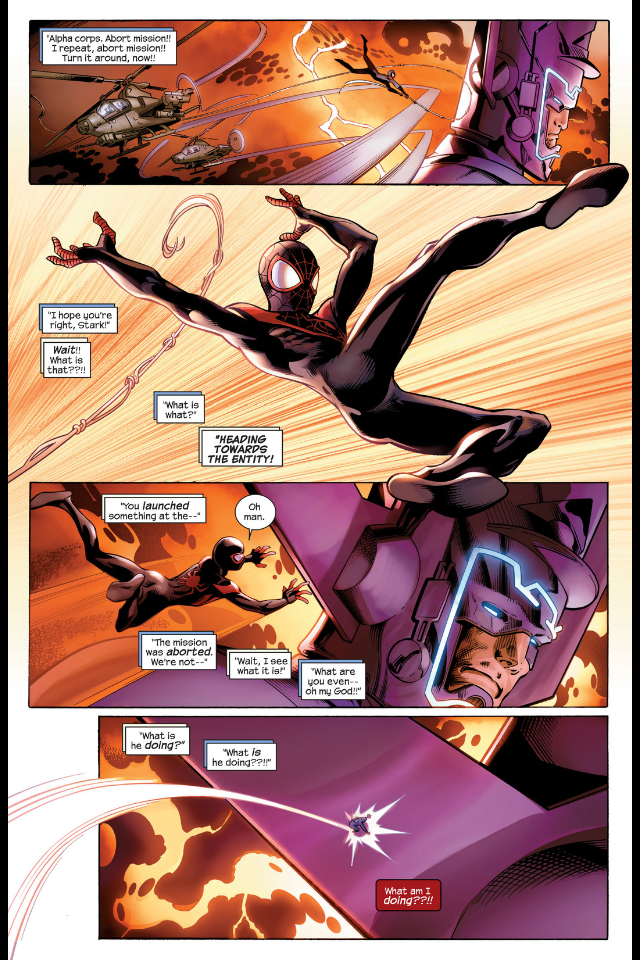 While not a lot happens in this issue apart from the Ultimates regrouping and forming a plan, Bendis' employment of the decompressed dialogue that has almost become his trademark by now pads this issue without any of it feeling meaningless. After all, the Ultimate Universe is facing a threat unlike anything they've seen before, A being from an alternate reality. Glossing over everyone's reactions would make the conflict seem shallow and through Miles Morales, we get a sense of how helpless they all feel against this new enemy, with the 616 universe providing that small glimmer of hope to keep things going.

Bendis also uses the multi-dimensional premise to build upon the events of Spider-Men as well as Age of Ultron. The inclusion of Mysterio makes a lot of sense and it's almost laughable to see the Ultimates treat him like a dangerous psychopath given his relatively minor status in his own universe. I was happy to see my request to see the X-Men appear granted and it wouldn't surprise me if they appeared in the final issue to lend a hand. Having personally not read any Ultimates or Ultimate Fantastic Four, it was pretty interesting to see Reed Richards with such an arrogant and downright unlikable personality, as well as Sue and the rest of the FF view him with contempt. So much for happy families.

Once again, Mark Bagley packs this issue with action, fire, dynamically posed characters and even more fire! Seriously there's a lot of that particular element in this issue, making the apocalyptic connections all the more vivid, though there's a lot more purple visible than what you'd expect from the apocalypse. Overall, another entertaining issue... 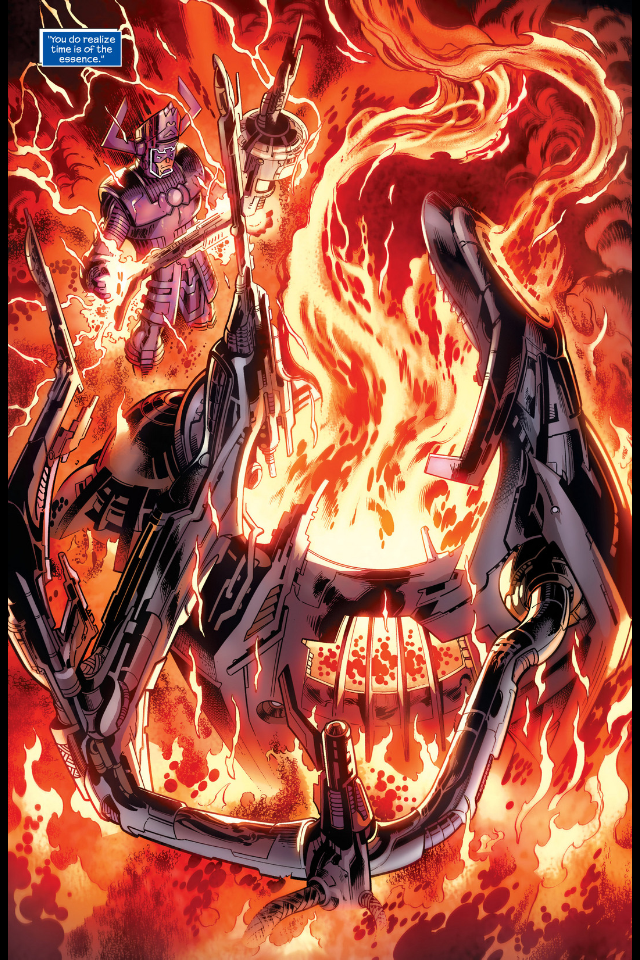