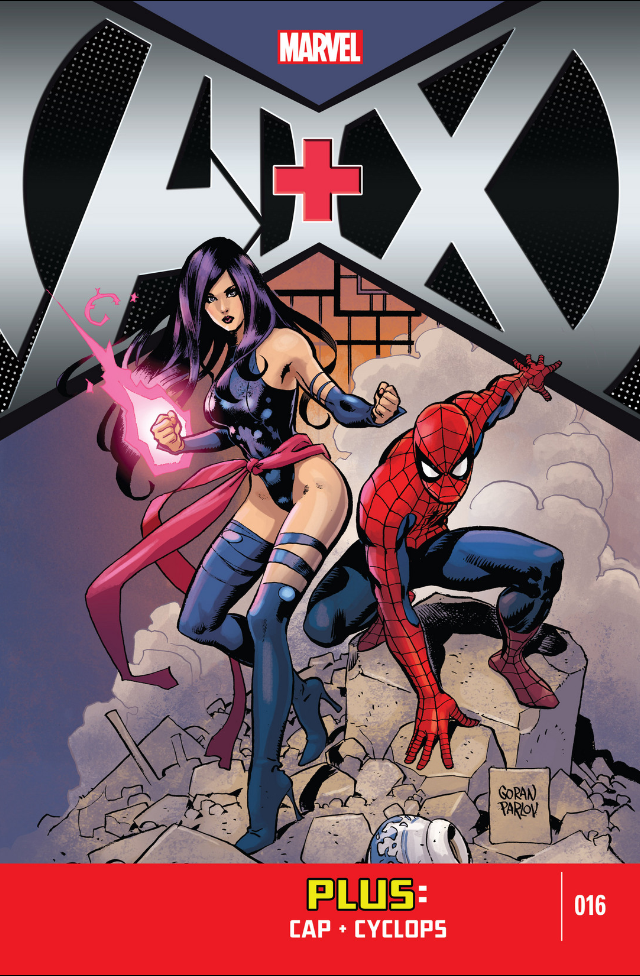 Hello everybody and welcome to my review of A+X #16. Well, we've dealt with Otto Octavius and his Superiority complex for two issues now! It's time for a change of pace, so let's go back in time to a team-up between Peter Parker, the Amazing Spider-Man, & Betsy Braddock, aka Psylocke of the X-Men!

Some time ago, Peter Parker, the Amazing Spider-Man, is web-thwiping through New York City with a very specific shopping list. He's distracted from his chores however by a series of noises coming from a nearby building, which he decides to investigate, discovering Psylocke engaged in combat with a bunch of mobsters with swords and guns. 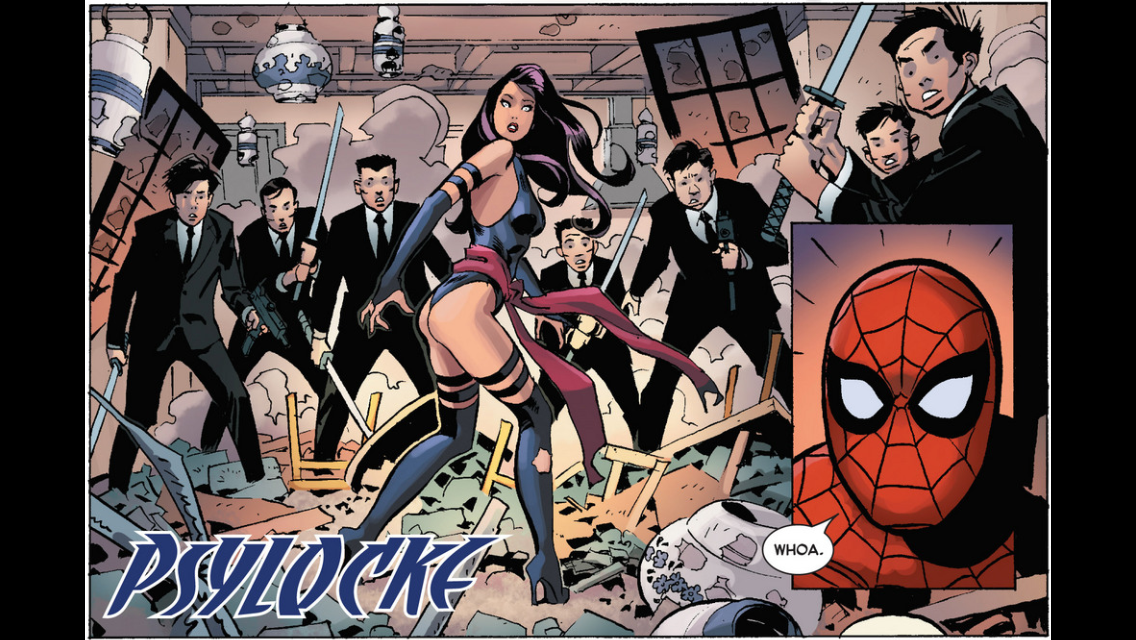 Naturally Spidey joins the brawl and thrashes the mobsters alongside Psylocke, utilising a classic Web Head fighting move against two of his unfortunate, would-be assailants. 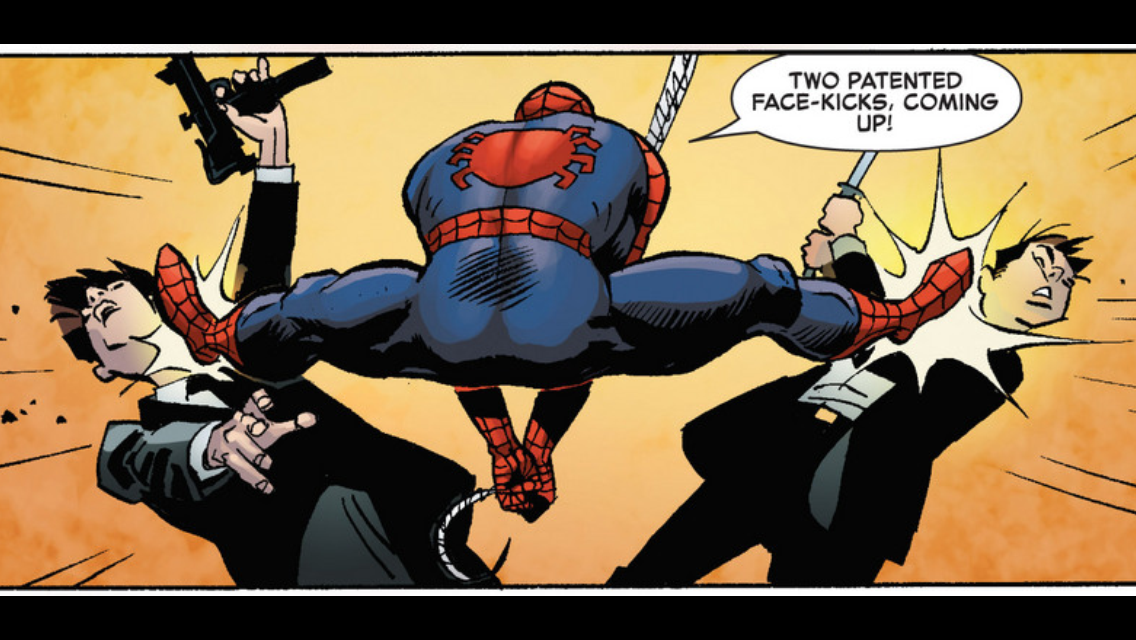 Just as he comments on how they make a good team, Psylocke begins using her powers to violently reach into one of the goons minds in order to locate an unknown female. Peter's Spider Sense warns him of a grenade set off by a barely conscious thug, but before he can properly warn Psylocke, it explodes. 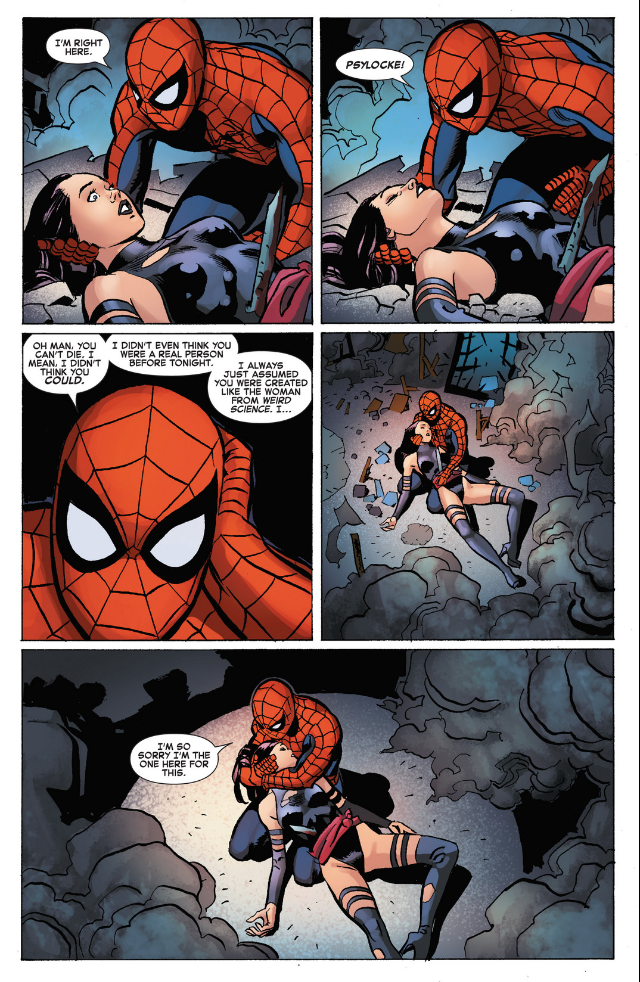 As the dust clears, Spider-Man looks for Psylocke, finding her impaled on a broken metal pole protruding from the floor. Peter tries to move her, but it just makes things worse, so he attempts to leave in order to get help. Betsy grabs his hand however and asks that he stay with her, not wanting to be alone when she dies. She asks Peter to tell her brother something, but is distracted by her telepathy cutting out before she can fully explain. Psylocke then loses consciousness, leaving Spider-Man to cradle her injured body and remark how sorry he is that he's the one present for this.

All of a sudden, Wolverine, Cyclops, Beast and Gambit arrive through the ceiling via the Blackbird. Cyclops tells Spider-Man that they'll take it from here as the others hoist Psylocke's unconscious form onto a stretcher. The X-Men then leave as quickly as they arrived, with Spider-Man left standing alone in the wreckage. After lifting his mask up to wipe away a tear, Peter mutters "freaking X-Men" before firing off a new webline and swinging away, now unable to focus on his shopping list... 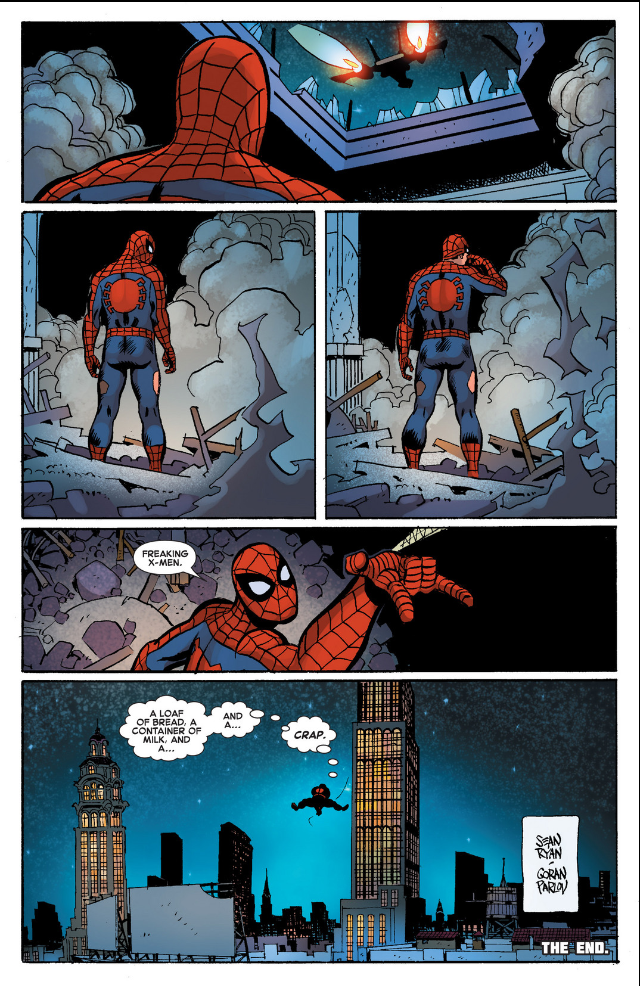 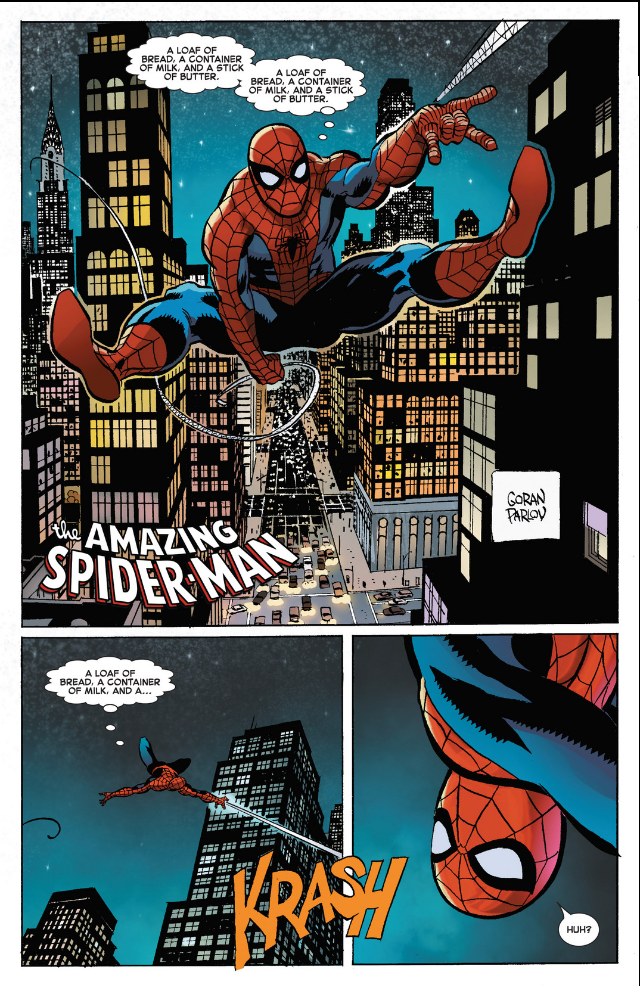 There's not much to talk about here. This story isn't looking to provide some deep seated commentary on comic book tropes or an in-depth character comparison. This is simply a fun little tale with amusing gags and some well written drama towards the end, but overall more of a back-up story.

Once again the presence of Peter Parker is really refreshing and he gets some amusing jokes like the line about patented face-kicks. Psylocke doesn't get much to do other than opening a can of whoop-ass on the random thugs, but her near-death experience gives writer Sean Ryan a chance to show Spider-Man's compassionate side and it was a genuinely moving scene considering the previously. I think the ending is a little too sudden though. The X-Men appearing out of nowhere was perhaps a nod to how involved their storylines are and how they're almost in their own universe sometimes (something Fox are probably all too happy to encourage), but it would still have been nice if Spidey had seen Psylocke recover, since we all know she wasn't going to die from that wound.

Goran Parlov is the penciller for this short story, providing it with an appropriately classic and simple look, while Veronica Gandini gives the art a modern edge with some vibrant, sharp colours. Spider-Man and Psylocke both look great and the shot of the X-Men descending from the Blackbird is really cool! Not exactly a deep story, but I'd say the art and some of the jokes make it a purchase worthwhile...