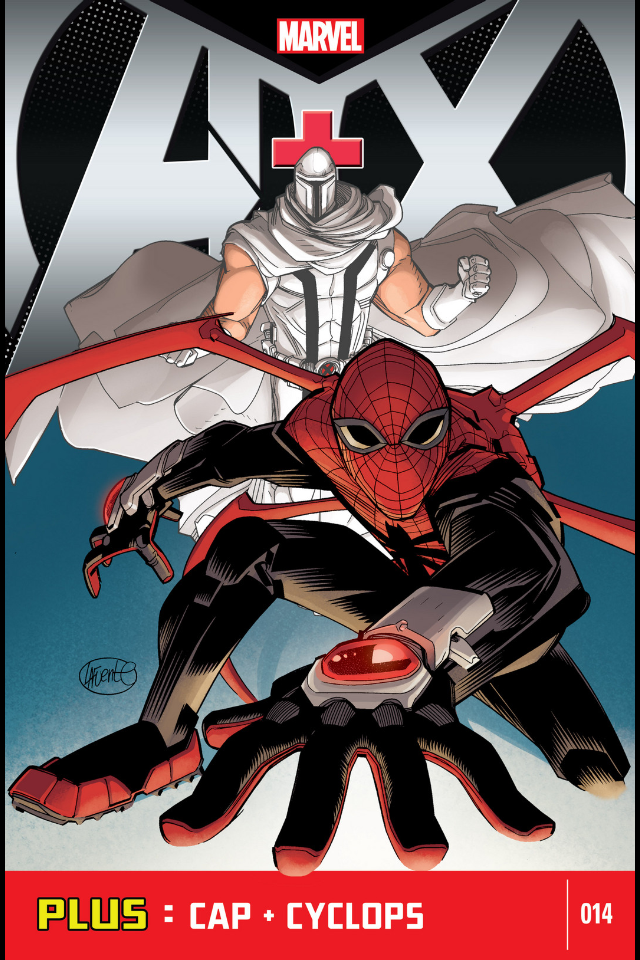 Hello everybody and welcome to my late half-review of A+X #14. So after the expert pairing of Cyclops and the "Superior Spider-Man" in #11, this time the supposed web head is butting heads with the Master of Magnetism himself, Magneto, as they take on the menacing M.O.D.O.K!

Otto Octavius, the so-called Superior Spider-Man, arrives in the Boondocks of Nevada. He enters the nearby tavern and  accesses a secret entrance to an underground complex there, expecting to run into a number of armed thugs. What he finds instead is a number of unconscious A.I.M thugs, courtesy of Uncanny X-Man, Magneto. 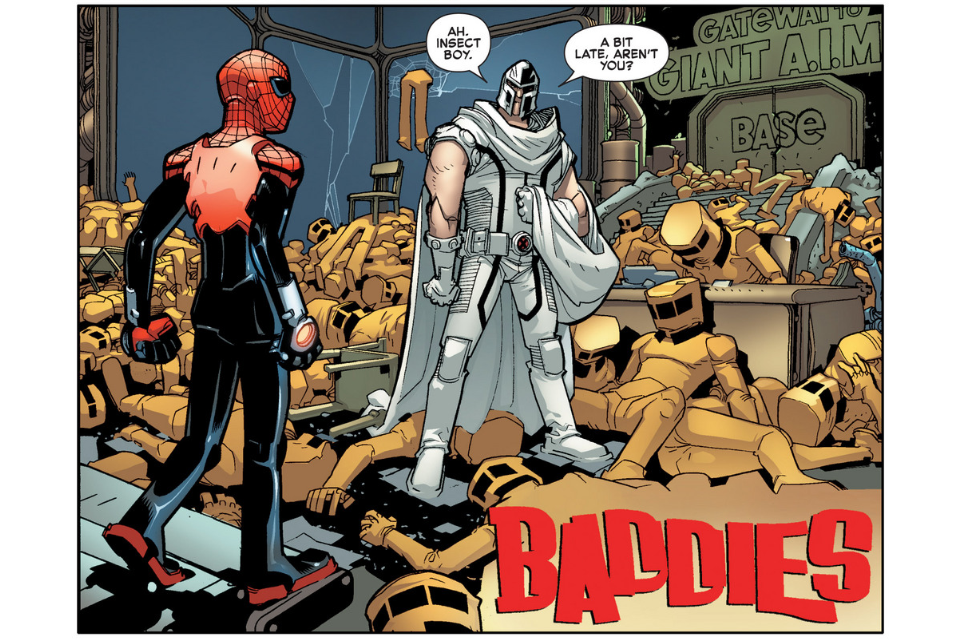 Remarking that he's a bit late, Magneto briefs "Spider-Man on the situation. A young mutant boy has been kidnapped by M.O.D.O.K, who murdered the kid's parents right in front of him, with the intent of brainwashing him to add another weapon to A.I.M's vast arsenal. 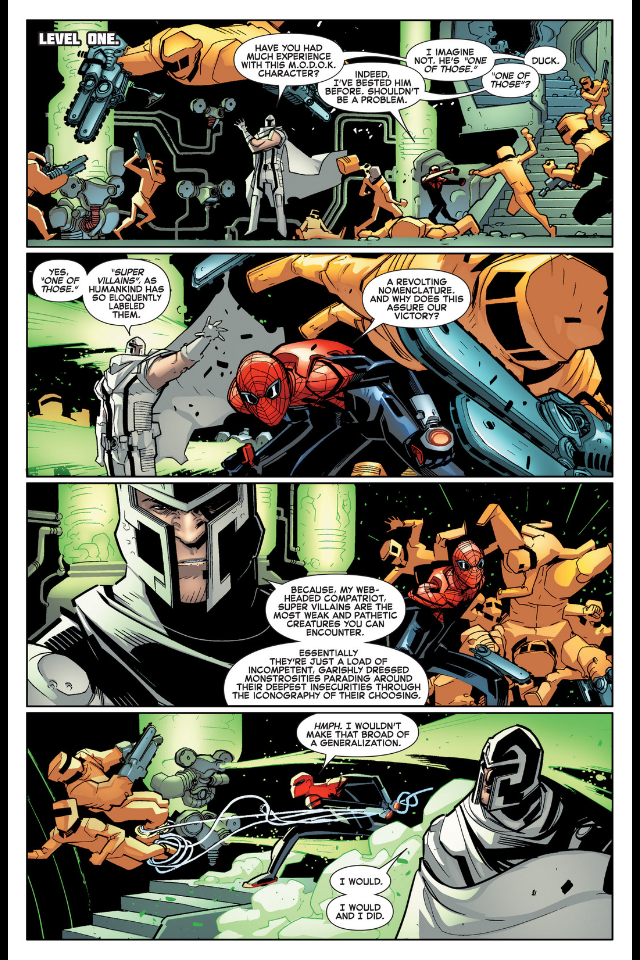 As the two fight their way through the five different levels of the complex, Magneto remarks that M.O.D.O.K will not be a challenge as he's a super villain, revealing his disdain of the moniker and it's recipients, calling them "a load of incompetent, garishly dressed monstrosities parading around their deepest insecurities through the iconography of their choosing" (brave words magnet-head!). SpOck takes issue with Magneto's criticism, suggesting he's being narrow minded and eventually snapping that he doesn't know what it's like to undergo a haunting and devastating tragedy, only for Magneto put him to shame by replying that he was actually in the Holocaust.

The pair near M.O.D.O.K's location, with "Spidey" nearly losing his rag with Maggie as the X-Man moves his criticism of super baddie tropes over to technology and remarks that only a fool would come up with the idea of metal tentacles. At that moment, M.O.D.O.K enters, blustering at the two "heroes" for disrupting his work. Magneto soon silences him, and by that I mean that he absolutely bashes the crap out of him, to the point where the now-harmless M.O.D.O.K begs for them to be gentle, while "Spider-Man" admits that Magneto might have a point.

With the enemy now vanquished, Magneto frees the boy, offering to take him  to the Uncanny X-Men's base where he'll be safe. Far from being grateful however, the boy blames the mutant race for the death of his parents and swears vengeance on all of them. He then flies up through the ceiling, departing for a future life of, in Otto's words, "metal tentacles". Magneto tells him it's all right, simply saying "you win some, you lose some (um...okay?) and they both leave the base... 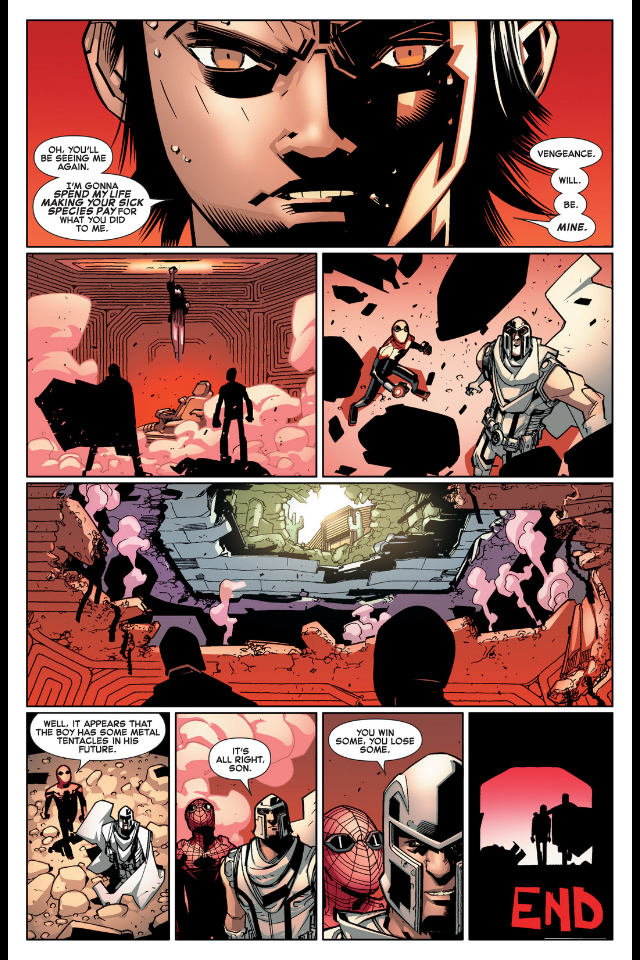 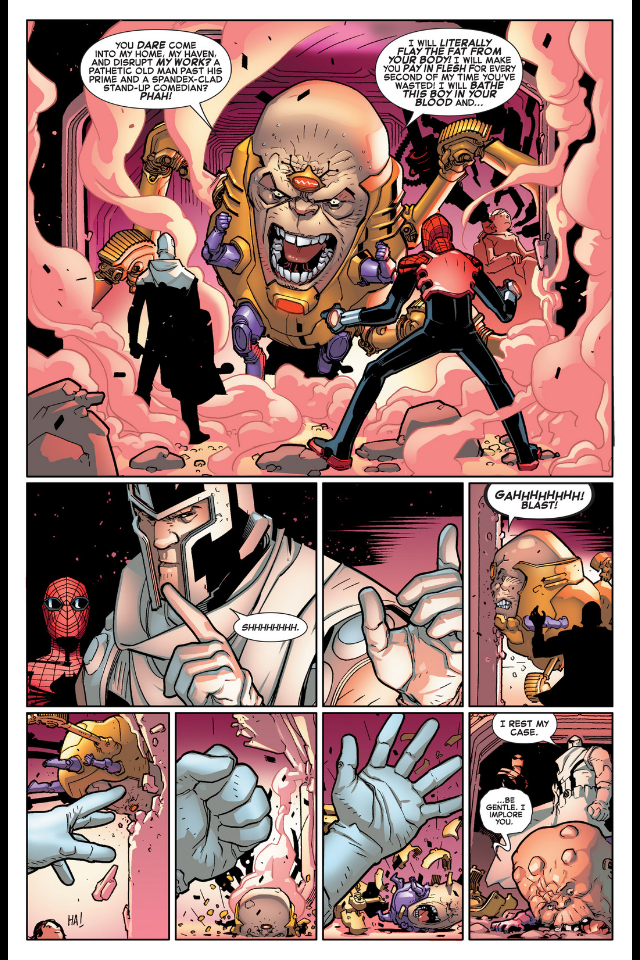 The first thing to praise about this short story is the humour. This is a very funny romp that never takes itself too seriously, as evidenced by the genetically altered rhino with bad grammar. The observation of super villain tropes provides additional laughs, reaching it's apex with the appearance of M.O.D.O.K and Magneto's subsequent dismissal of him. Say Anything frontman Max Bemis is clearly having a lot of fun in his writing debut for Marvel and that energy is pretty infectious.

The dynamic between SpOck & Maggie is pretty well realised, though I'm slightly confused as to why Otto doesn't try to take Magneto down when they first meet since, because of the Phoenix Force, his powers are weaker. Otherwise these two behave as you'd expect, sniping and condescending at one another despite their similar personalities. Magneto pointing out and looking down upon super villain archetypes, while being completely unaware of how much he fits in among them is very true to his character, as at his core he's a walking, talking contradiction. Otto's defense of these archetypes is representative of his own ego and it's bizarrely quite satisfying to see Magneto match him in terms of arrogance, the crowning moment of shame being the Holocaust line.

The only major problem with this story is the way in which it ends. Having Magneto brush off the incident like it's nothing not only feels out of character, but it undercuts what could have been a rather poignant ending to this story in favour of a cheap joke. David Lafunte's art is a great fit for this story, although personally I think Spider-Man looks too much like a teenager here. The page where every level of the A.I.M complex is imagined as the level to a retro video game is a particular highlight of the quirky style being applied to this comic, and Edgar Delgado's colours are as reliable as ever. While it's not as strong as the previous story to feature SpOck, this is still worth a read for the humour and the interaction between Magneto & "Spider-Man", and hopefully Bemis will have the chance to hone his writing skills some more at Marvel... 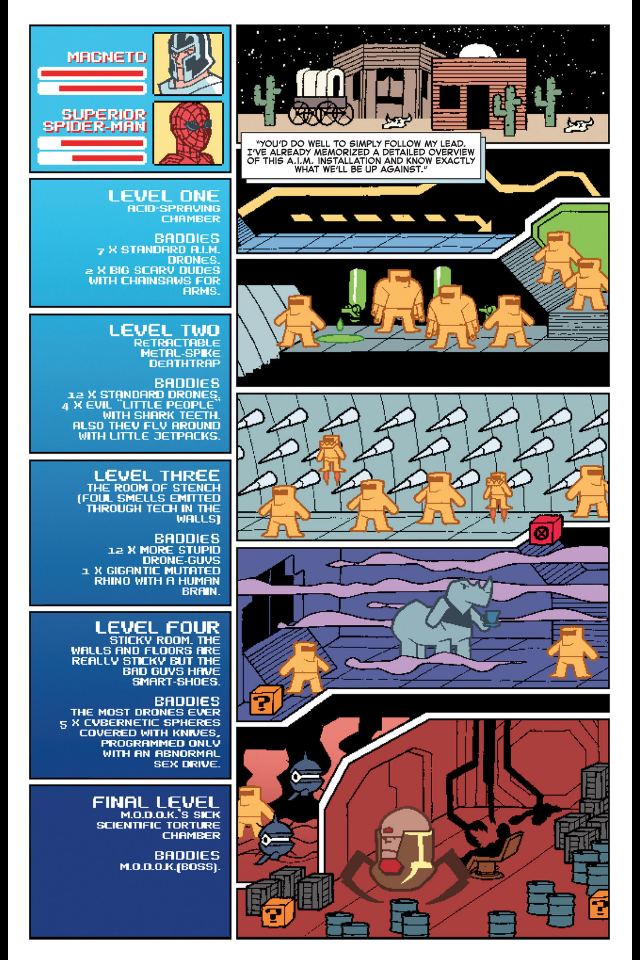