While we mostly just review comics on here, I thought I'd post this before this gets any older than it already is. Below is a number of Amazing Spider-Man 2 movie posters, hinting who our villains will be, not that we really need the hint, since the director seems to be making no attempt at any secrecy about anaything in this movie.

Anyway, here are the posters: 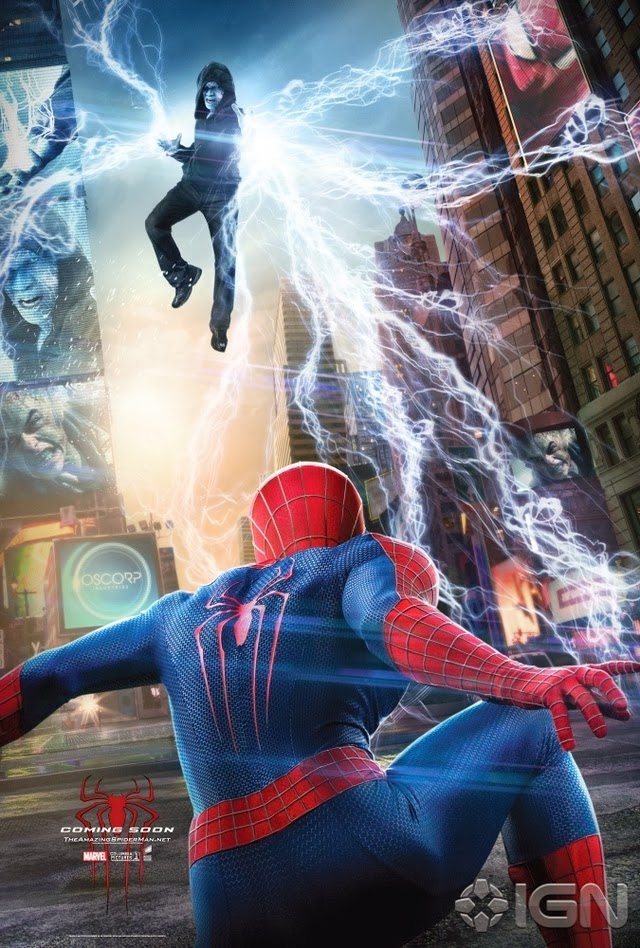 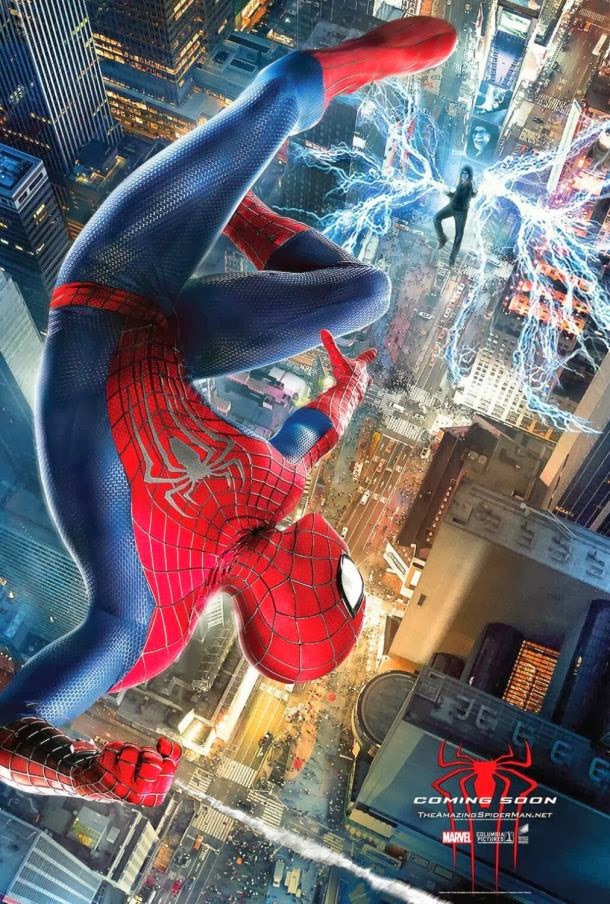 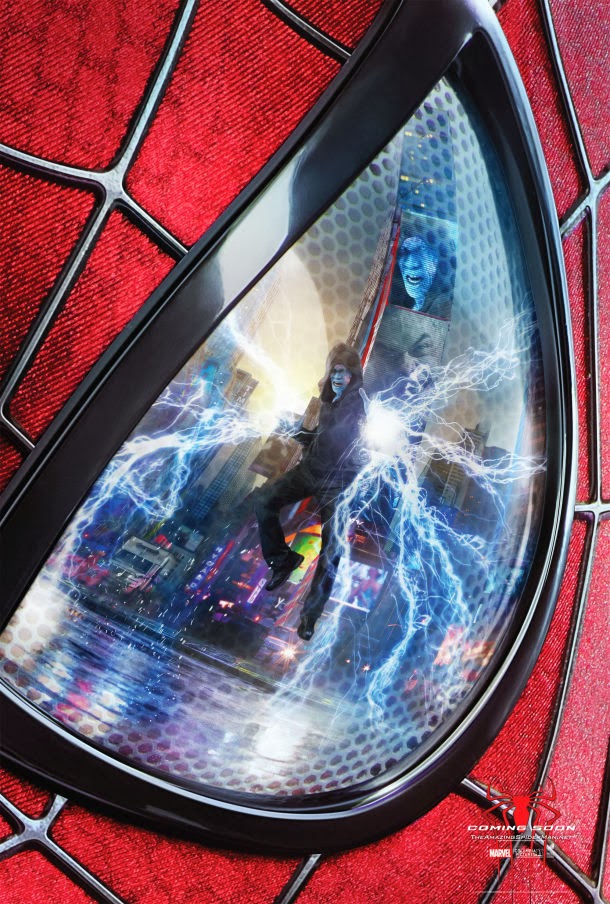 Coming to you in Cinemas soon!
Read More

AMAZING SPIDER-MAN # 700.5 REVIEW
Spider-Man and Human Torch: Save the universe

Following the events of the Black Lodge, Peter returns home one morning, extremely tired, wishing to get some sleep. Just as Peter is about to go to sleep, he is disturbed by Johnny Storm.

Johnny explains that he was visited by Ben ( The Thing) from the future, who hands him a Calvin Mechanism. He warns Johnny that Reed must not come near it as history shows he accidentally sets in off, causing all kinds of bad things to happen. Future Ben then disappears, telling Johnny that the universe depends on him.

Essentially, the Human Torch flies off to Mary Jane's apartment when the rest of the Fantastic Four arrive at Peters apartment. (He saw a picture of MJ in Peter's apartment) After waiting the whole day, Peter decides to open the bag, only to find a note from Future Ben, teasing Johnny Storm, telling him it was a hoax! 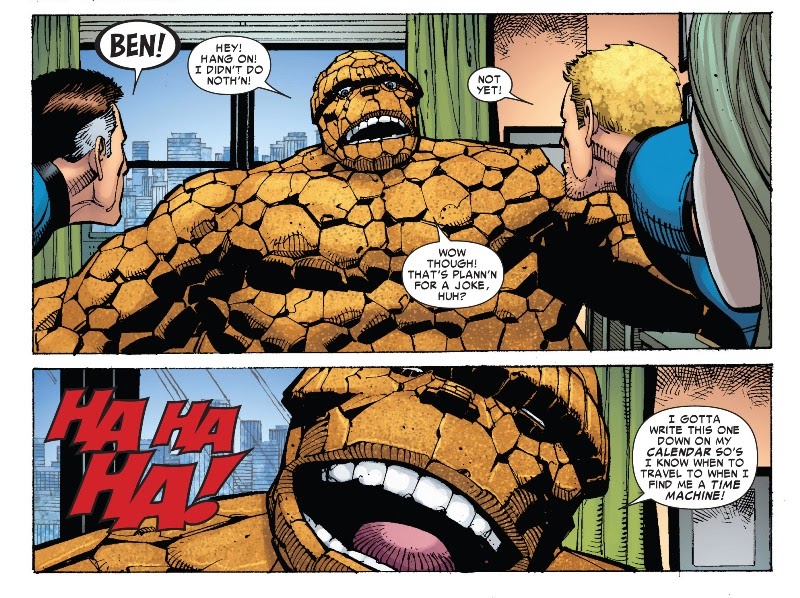 That night, future Johnny tries to pull the same stunt on current Ben. Unfortunately for him Ben tells him it was yesterday's joke. The issue ends with Ben thinking why they aren't doing better things with a time travelling machine.

Second story: What would Spider-Man Do? (I think that's the title)

This story begins with Spider-Man rushing a kid to the hospital. He tells the doctors that he was shot in the back.

Back in his apartment, Mary Jane comes home. Seeing Peter sitting alone in the dark, she asks him what is wrong. He explains how the kid took a bullet for him and ended up getting shot in the back. While the kid's intentions were good, Peter knew he didn't need the kid to take the bullet for him as he could have easily dodged it. 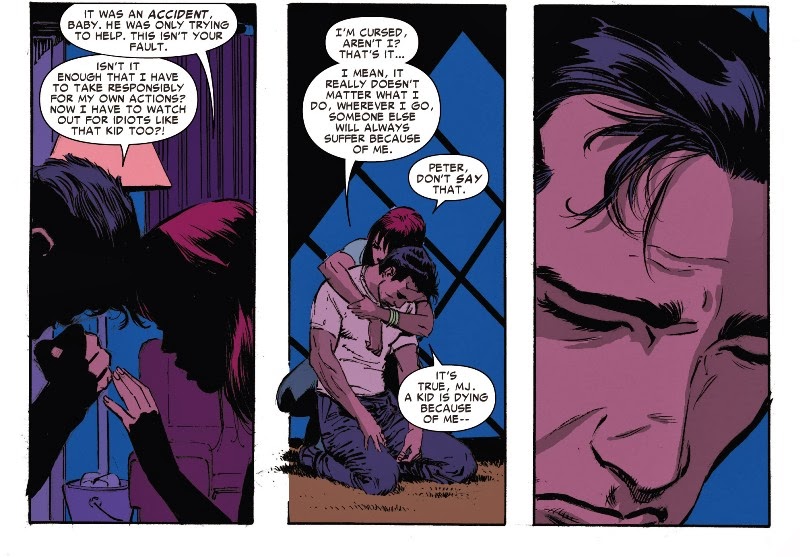 Peter visits the kid in the hospital, admiring his bravery, despite having no super powers. He leaves when the boy's parents come into the room. The father of the boy blames Spider-Man for not saving his son.

A few hours later, the boy wakes up, asking to speak with Peter. The kid tells him that he knows he is Spider-Man. He tells Peter that Spider-Man was his inspiration ever since he witnessed Spidey save a girl from a school bus when he was six. His motto in life was " What would Spider-Man do?"

Peter tries to tell the kid that he is not a hero, resulting in the boy getting a cardiac arrest. The boy dies, and at the funeral, his parents hand an envelope to Peter, asking him to pass it to Spider-Man. Peter opens it and sees a comic that the kid drew of Spider-Man, called "What would Spider-Man do?"

I thought both these issues were absolutely fantastic. While the first story lacked depth, the humor in it and the way it was written was fantastic. The conversations between Johnny Storm, Peter Parker, and Ben make the issue thoroughly enjoyable. 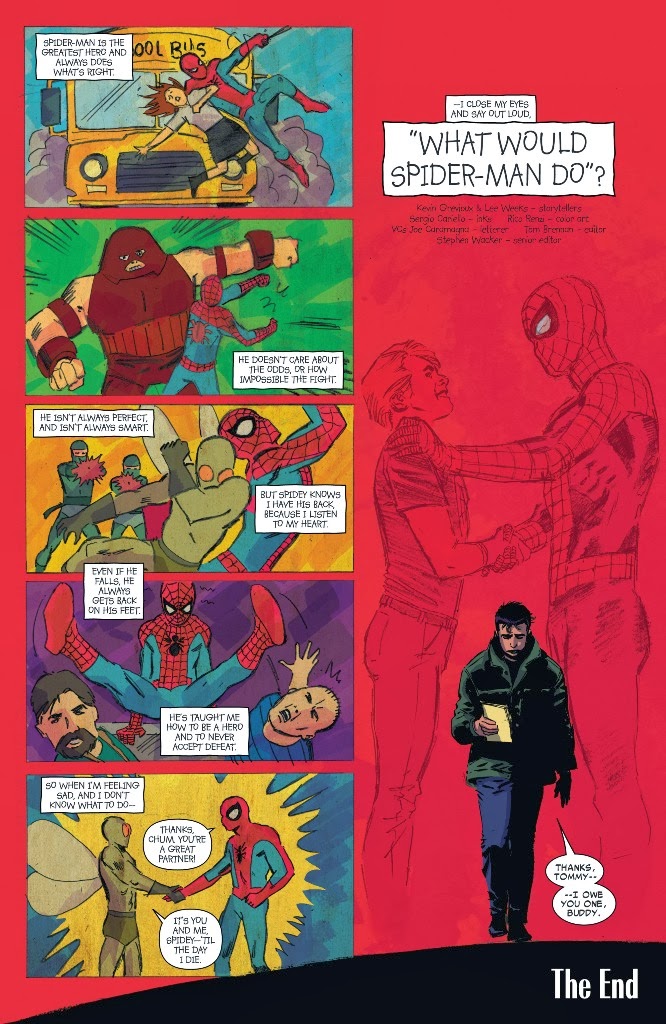 I found myself laughing out loud, just like Ben did in the issue when it is revealed that this 'world threatening' Calvin Mechanism was a hoax designed by future Ben to get at Johnny Storm. Anyone who has read even a little of Fantastic Four would appreciate the humor in this issue as pay back to Johnny.

In both stories, it was refreshing to see Mary Jane portrayed as Peter's girlfriend.

The second story, unlike the first, was a serious one in which a kid dies trying to save Spider-Man. This story was meaningful and would have been a truly touching story if Spider-Man was real. For the sake of the comic however, Peter learns in this issue that though he may not realize it, he is actually inspiring the lives of others by doing what he does as Spider-Man.

Regardless, this whole issue is definitely worth reading, just for the dialog in the first story alone!