Flash tries to get his symbiote to come back to him. The Symbiote tries its best to leave Spider-Man, exclaiming that the Superior Spider-Man 'tastes bad.' Spider-Man however, actually being Doc Octopus, is able to control the beast, and make it submit to his will. Dr Wirtham tries to use his 'Cardiac' powers to stop the Superior Venom, but instead gets stabbed. The Superior Venom then states that if he were not in control, we would have killed Dr Wirtham instantly instead of mercifully stabbing him. (I guess that makes sense)

Feeling the power of the symbiote, the Superior Spider Venom decides to hunt the city for all kinds of petty crime, creating a new name for himself. In the midst of teaching the city's criminals a lesson, he receives a call from Ana Maria, who is crying on the phone. Superior Venom then goes directly to her place to see what the matter is. 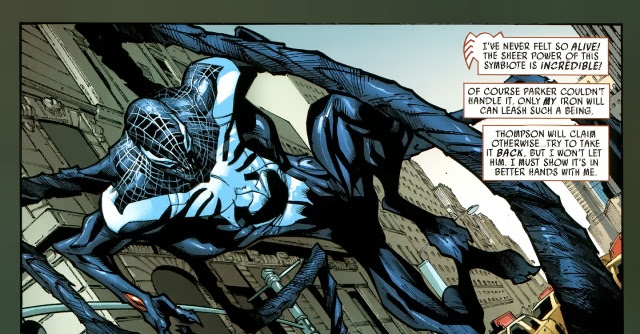 Ana Maria states that she feels bad about causing Aunt May to feel concerned because of her short stature. This upsets Peter-Ock, and he assures her that Aunt May will not be an issue as far as their relationship is concerned. 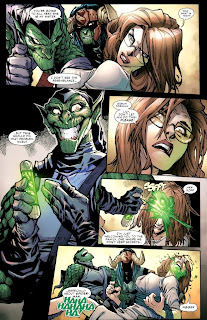 Back in his underground lair, the Goblin King tells Phil Urich, that he threw away the money he stole from
Kingsley, just to send a message. He then proceeds to check on Menace's progress with getting information out from Carlie. When he finds out that Carlie still has not spilled any information, he deicides to give her some goblin serum to turn her into one of them. 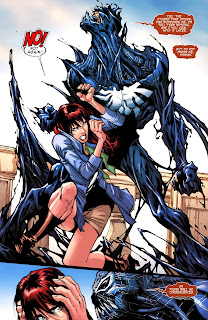 We next see Mary Jane, trying to contact Carlie. She leaves her a message saying that she will stay away from Peter and will instruct Aunt May and Jay to do the same. Expecting MJ at the door, Aunt May is surprised to see an angry Peter Parker at the door. Peter scolds her for humiliating his girlfriend after he had fixed her leg for her. ( Superior Spider-Man Annual # 1) Just as things are about to get even more heated than it already is, Mary Jane comes in, pulling Peter outside to the balcony, demanding an explanation for his new behavior. Peter shuts her off after receiving a call and transforms into the Superior Venom. This sends MJ screaming as she had always hated the period of time when Peter wore the Symbiote. ( Back when they were married, although she doesn't remember that part anymore) 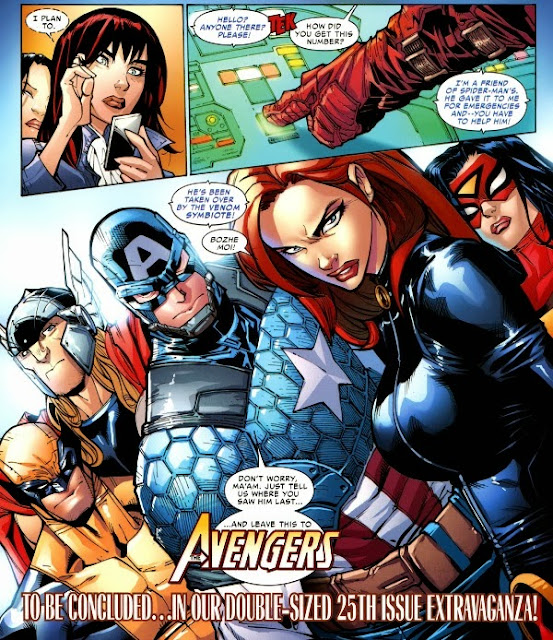 Elsewhere, Kingsley's guys are busy stealing more money to pay him with. They are stopped however by the Superior Venom!

Adding to the drama of the book, we also learn that Flash's body is no longer able to live without the symbiote as his biology has changed, giving him only hours to live!

I am a little disappointed that this issue ended in such a way that it made it seem that Carlie's 'important message' was that Peter had the Venom symbiote on.While that is a big deal, it isn't the actual problem. This could lead to Mary Jane thinking that everything will be back to normal when the symbiote is off.

I was really glad to see more of Mary Jane in the comic. The scene where MJ is terrified of Peter changing into Venom was classic, bringing back memories of the old days.

Alternatively, if he is not the Green Goblin, but is instead one of those serving him, then I really don't think his 'Goblin King' name is very appropriate.

Finally, we have the issue of Carlie, potentially turning into a goblin, much like Lily turned into Menace. This would really be a game changer, possibly causing a lot of controversy online. The likelihood of her turning into a full on villain however is pretty low, and like Peter's death, I think the effects will only be temporary.

What about Flash? Nothing fatal I presume. Overall, good book, good art!