This first story focuses slightly on the Master Weaver being the portal for the inheritors against his will. He spins his web, watches and observes all that is happening. He narrates to himself about how the life is laid out like tapestry following the same pattern again and again, though having some twist in the tale, the strands always find a way to reweave themselves to some version of the original, because the Master Weaver weaves it such. 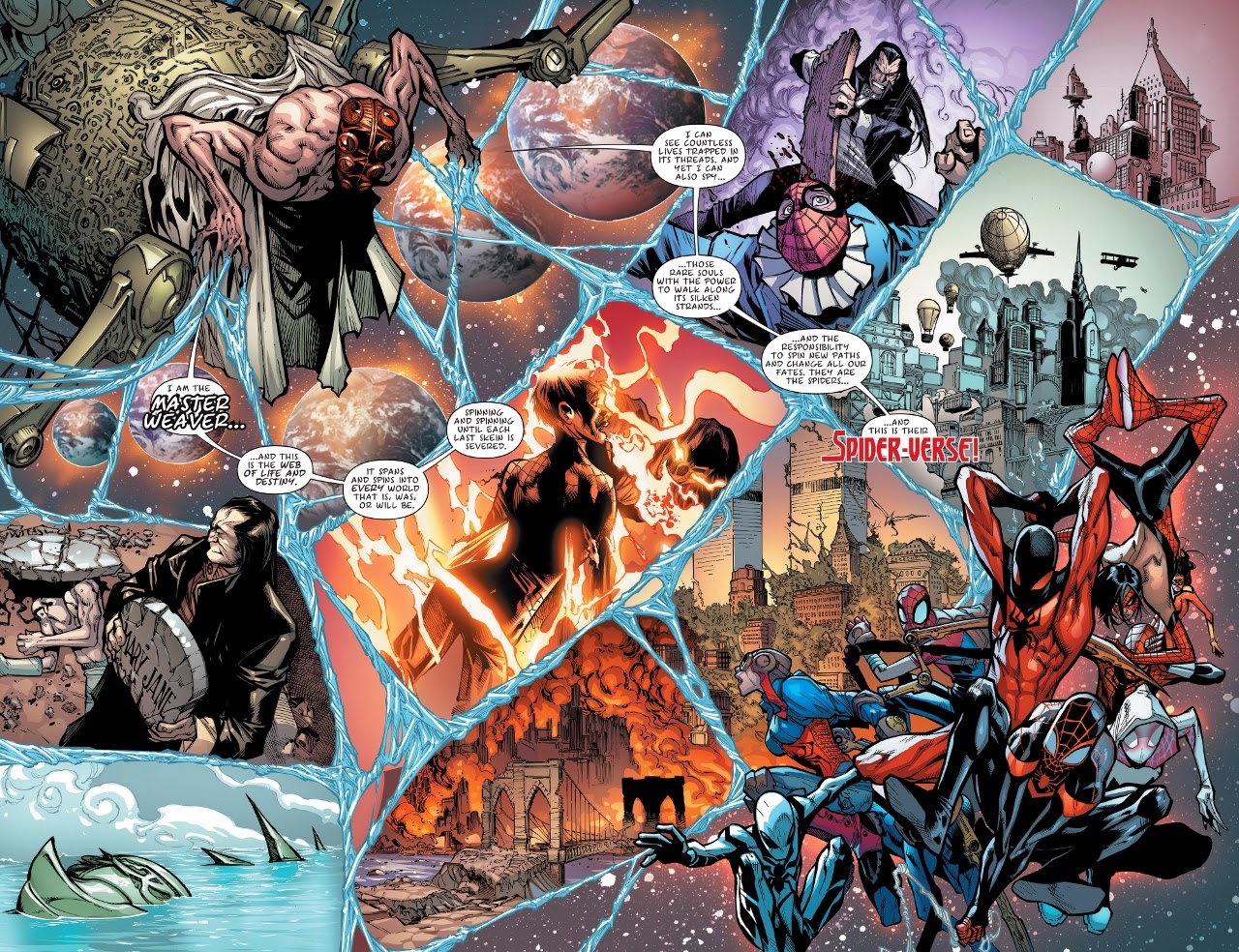 In the midst of the variation, we see a version where Peter and Uncle Ben are both at the "science fair" where Peter was bitten, except that this was a light show, and Peter is for some reason really intrigued by lights.

Spider-Clan : The Many
Second, we have earth-2301, where a dead Aunt May comes to life having spiders come out of her eyes, telling Peter to "join us."

We find out that the whole scene was part of Peter's meditation vision. In this world Peter is a monk who is bald. He has apparently given up the Spider-Man mantle a year ago. After having received the vision, Peter decides he must find Venom. Though MJ questions his actions, Peter insists he must leave.

He hikes up a snowy mountain in his Spider Costume ( why couldn't he web his way up?) Up on the top of the mountain is a temple where he sees his dead Uncle Ben... alive. As he questions how it is possible, he is greeted by Venom, who looks more like a version of the Genie from Aladdin with legs.

Venom warns Spidey not to follow that "Uncle Ben," but Spider-Man refuses to obey as he feels a calling into the temple. As such they end up in a fight. In the midst of their fight conversation we learn that Venom once taught Spider-Man all he knows up on the mountain.

After defeating Spider-Man, Venom proceeds to kill him but is stopped by Spider-UK's team who comes out of the temple and recruits Spider-Man.

This story takes place on earth-803, a world where the year is 1895, a time where the sky was the limit… unless you were a woman.

The story follows May Reilly, who is essentially a younger Aunt May. As the story goes, we learn that she was bit by a spider, one of her father’s study animals. One day, she tried to let the spider out of its cage, seeing that it was sad in captivity. The spider obviously bit her, and she gained spider powers. She also learned a valuable lesson – not to let anyone cage her. 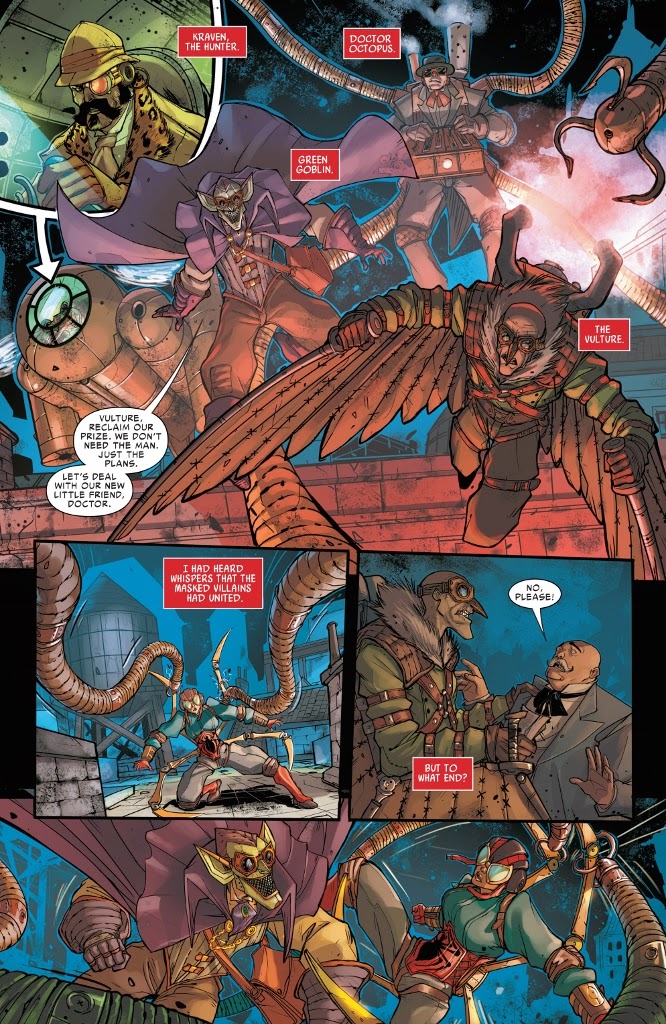 May is at a ballroom dance when a version of Electro appears and causes trouble. Electro has kidnapped the Mayor and May changes into her costume – one somewhat similar to that of Anya Corazon’s original costume, only with a corset top, somewhat more fitting to the year 1807.

May takes out Electro, only to be met by Kraven, Doc Ock, The Vulture, and the Green Goblin, all in absolutely stunning costumes. As May continues to fight them, a sixth villain appears – Mysterio, who assumes the role of the leader of the group. He hands the victory of the night to May, stating that this is not the last she will hear of the Six Men of Sinestry, and disappears with the rest of the bad guys.

The Mayor thanks May for her assistance, though unsure of what to call her. May tells the mayor to refer to her as Lady Spider!

Spider-Man in “Late for a Date”

This story features the last we will ever see of the old Hostess Snack Cake ad Spider-Man. Needless to say, Morlun comes to kill him too. For those who are unfamiliar with him, you can check out this link.

He used to have a number of old simple adventures which I suppose will now be permanently missed. 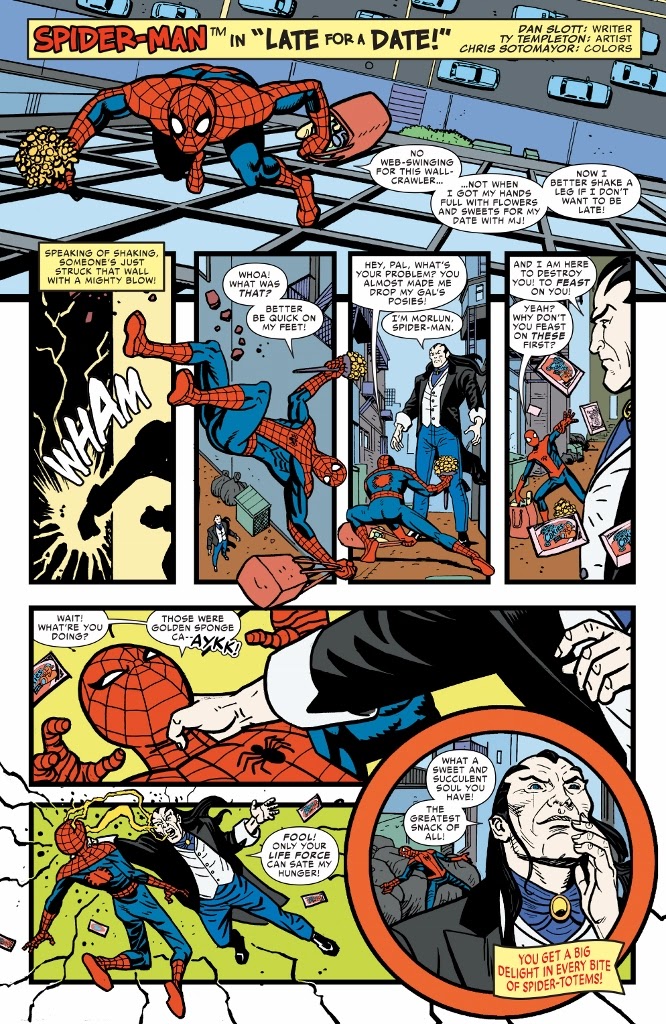 Over on Earth-11, we see the story of Penelope Parker, a world in which I suppose Peter was a nerdy girl. She has trouble fitting in with her friends, and getting bit by a radioactive spider and receiving weird spider powers isn’t helping her become normal like the other kids. 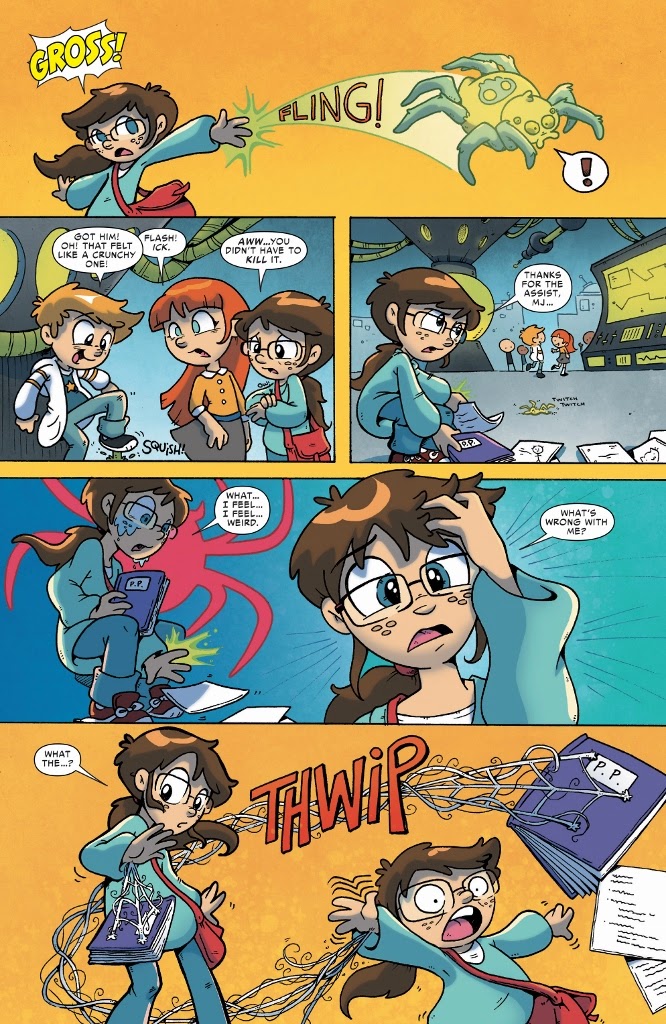 Over at the playground, Flash Thompson has climbed up somewhere high just to spite their teacher, Ms Kraven. Flash  slips and nearly falls, but Penelope is too scared to use her powers to save him for fear that people will think her weirder than she already is. Thinking quickly however she takes out her lunch paper bag, cuts some eye holes and uses it as a mask to swing and save Flash. ( Fortunately, Flash was able to hang on to whatever he was falling from for a long time. )

This 11 year old spider-girl however tells her Aunt May everything that happened to her with the spider. This Aunt May is extremely supportive, and after receiving some good advice from her, Penelope designs a spider-girl costume in which to continue her heroic acts.

Here we have another short Spider-Man story about the Spider-Man from the newspapers comic section we read daily. As we all know, these comics take forever to tell a simple story, and in this dimension, Morlun grows tired of repeating himself over and over again, taking so long for a simple action.

He soon finds the dimension disappearing and lands back at on Earth 001 where the Master Weaver explains to him that the world he was in became unstable and disappeared.

Little does Morlun know that the Master Weaver had actually rebelled against him and hid the newspaper world in a pocket realty, safe from the dangers of the Spider-Verse. 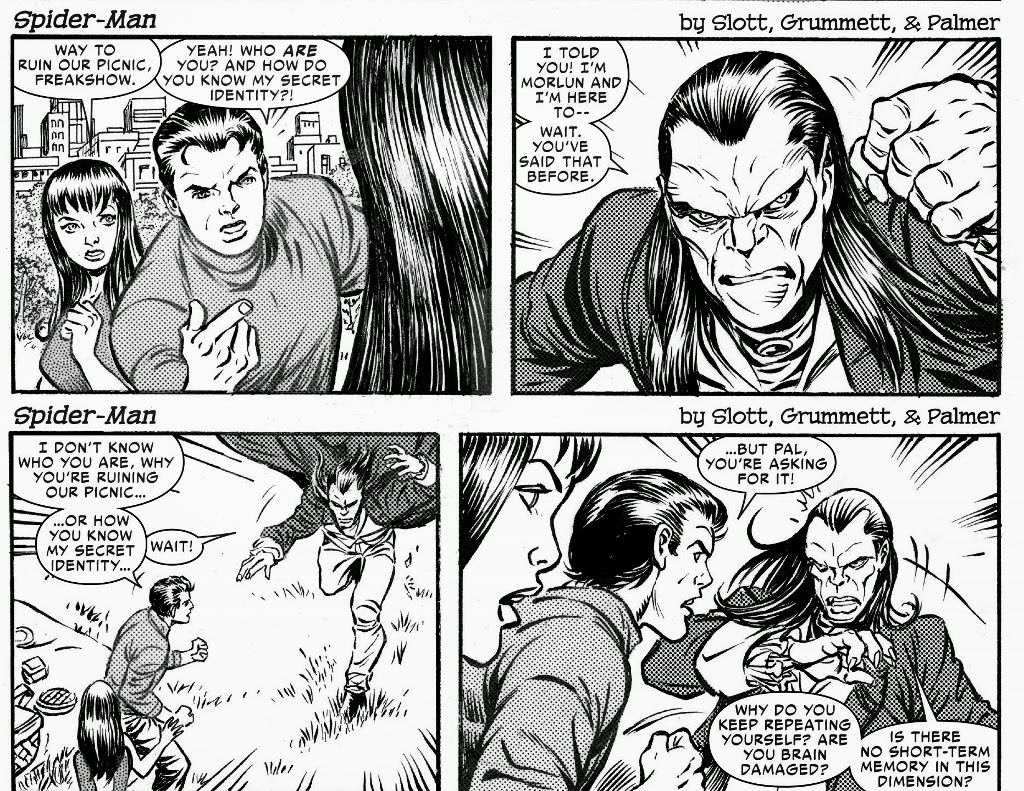 As mentioned at the start, this whole issue does not actually have a proper story line, but instead simply features various spider-characters and how Morlun kills them all…

Well, to be fair, Morlun didn’t appear in each story. In fact, we even had more recruiting taking place in the first story. Eventually however, I’m quite sure most of these Spiders featured will die, except for May Reilly aka Lady Spider hopefully, as she seems to be a pretty cool character.

The issue begins and ends with the Master Weaver. At the start, the Weaver narrates about how he is in captivity, forced to do the will of his captors. Yet at the end of this issue, we see that he has secretly rebelled to save the innocent newspaper cut outs world.

While a number of good old innocent Spider-men have already been killed, none would have affected me as much as if the newspaper Spidey that I followed for so long was to be killed. Thank you Dan Slott for that save!

Without a doubt, my least favourite Spider people were Penelope Spider-Girl and that Monk version of Spider-Man. It may also have to do with the art style as well, but those Spider guys just don’t cut it.