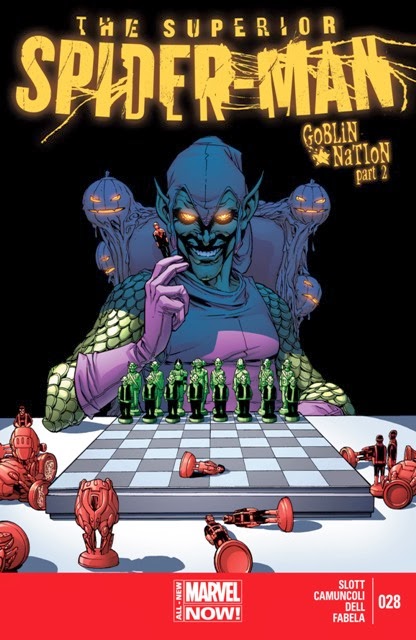 Otto-Spider-Man is dumbfounded as he thought he had outsmarted the Goblin by cracking the Goblin's stealth protocols (nerd talk) Basically, the Goblin proves to Otto, that he is superior to Otto. Superior Spidey cowardly makes a run for it, leaving his spider patrol to fight to their death, hopefully keeping the goblins busy while he makes his escape. His escape however does not go unnoticed.

With Spider island destroyed, Mayor Jameson released a press release about his new goblin slayers ( former spider slayers). The scene changes to Mary Jane, who is watching the news with her new boyfriend - Pedro. She expresses her concern for Jameson's new move, but Pedro doesn't understand. Just then her apartment is attacked by little kid goblins. Pedro tries to fight them off, but MJ has a better idea. She takes out her set of web sprayers and webs the kids dressed as goblins up. She then takes Pedro with her, realizing what the Goblin is doing - attacking all those close to Peter.

To keep this short, MJ gather Aunt May and Jay. She also calls her aunt Anna to take the first flight out of town. The goblins sent to collect all those close to Peter find that all the apartments are empty. Unfortunately, MJ forgot to pick up Ana Maria, who is instead picked up by Lily Hollister aka Menace. 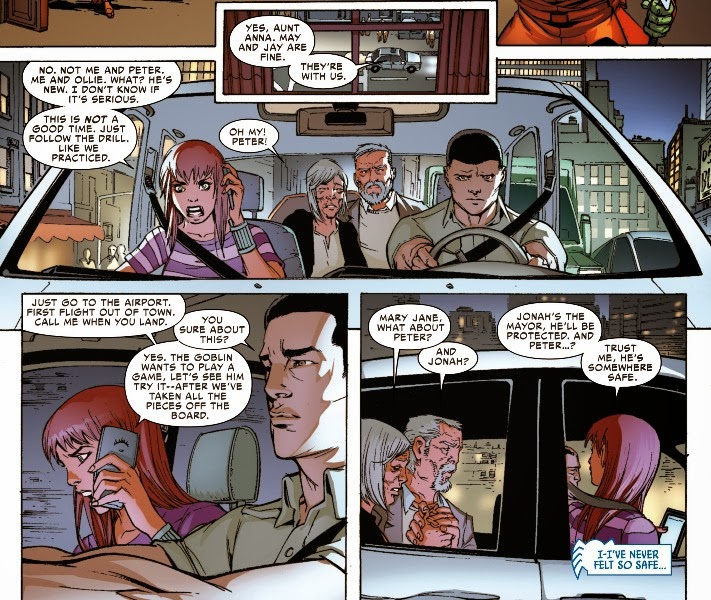 Meanwhile, we have Peter Parker ( the real one in ghost form with his remaining 31 memories) living out Dr Octopus' entire life. He finds it difficult to remember who he is. The last time we see him in this issue however, his 31 memories of himself are no longer enough for him to remember himself, and he now thinks he is Dr Octopus!

Coming back to Spider-Man in real life, who has now changed to his Peter Parker clothes, we see him going to Parker Industries, where he hopes to come up with a new plan. Unfortunately, he stopped by a very angry Sajani who demands an explanation for his disappearance. They in turn are later stopped by Wraith, who also wants to have a few words with Peter. The drama doesn't stop there however as even the Wraith is interrupted by a Goblin - Carlie ( who now looks really ugly)


Peter leads Carlie to a room alone, away from Sajani. There he fights her and breaks her earpiece. With the earpiece destroyed, and the Goblin unable to listen in on her conversations, Carlie, in her right mind tells Peter that he needs his help to transform back, and likewise, he needs hers to stop the goblin.

First thoughts : When did Carlie reveal that Peter Parker was Spider-Man to the Goblin?

With the Goblin now knowing Peter's secret identity, we have a really big problem for the real Peter Parker (This kinda thing cost Peter his marriage!!)

Regardless, the Goblin clearly knows now and is ready to take all those close to Peter as hostage. Although, it just hit me that perhaps the goblin was simply targeting Peter's loved ones because he designs equipment for Spider-Man. That would really suck as well.

While MJ did a good job of rescuing most of Peter's loved ones, poor Ana Maria is left alone with Lily Hollister, the only person who truly matters to the new Peter Parker, aka Otto!

As for poor Carlie, I hope she finds a way to fix herself with Peter's help. Likewise, Peter could also used some help from her.

It's nice to see that Mary Jane kept her Valentine's gift from Peter many years ago (the web shooters) back when they were still married. We also confirm that MJ is going out with Pedro, or Ollie as she calls him. Personally, I doubt this guy is going to be around for long, especially after the events of this story.

What about poor old real Peter Parker, who has lost his identity in Doc Octopus' memories?

With the real Peter Parker, now merged with Otto Octavius' memories, even being part of it, we are going to have a very different Peter Parker from the one we had once known. This would be great for Marvel obviously because they, like DC, seem to want to relaunch everything for new readers. I have a feeling that if ghost Peter manages to take control of him self, he will also take control of the physical Peter Parker in the real world, since he now controls Otto's memories.

This is of course assuming he can control it.

Anyway, we'll have to wait and see.

Can't wait to see Spider-Man 2099 make his appearance next! 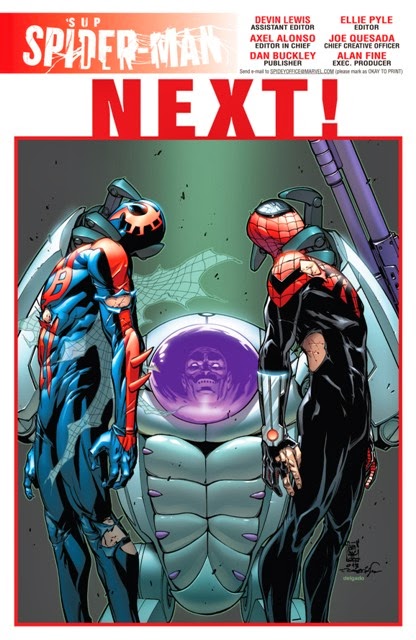