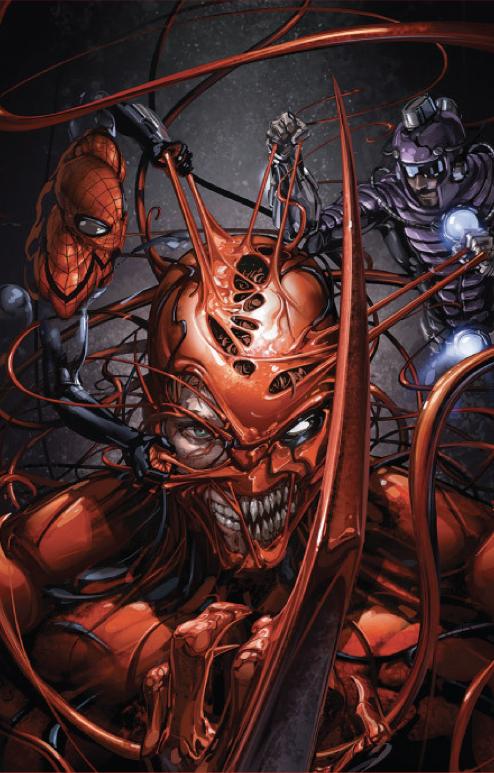 
Issue 5, we have arrived. Previously the Wizard acquired the hostile alien symbiote know only as Carnage, and used it for his most heinous of intentions. His self proclaimed brilliant idea was to turn this creature into his own brand of mercenary and point it at city hall. It was there that Spider-Man was able to intervene and engage the menace in mortal combat. After much struggle, Spidey was able to prevent the newly upgraded Carnage from holding NYC for ransom, but alas the symbiote has switched bodies and jumped over to the real man in charge: the Wizard. Will Spidey be able to handle this combination of brains and brutality? Brace yourself for the final installment to this nightmare fiasco.

We open with a detailed narration from a now omnipresent Klaw. He denotes that his self destruction caused his molecules to spread throughout the atmosphere. He observes as Spidey and “Wiz-arnage” lock horns so to speak. Carnage demands that Spidey live up to his promise and deliver his son Bentley to him, but Spidey refuses and suggests that he just turn himself over to the authorities. Sensing his need for help, Spider-Man calls for his minions to bring the flamethrowers. However, due to the shoddy workmanship, the flamethrowers are a bust. Meanwhile a boy claiming to be the Wizard’s son shows up. Carnage proceeds to wreak havoc on the body of Spider-Man until it seems like Spidey finally gives in and agrees to let Wiz-arnage see his child.

But alas it was merely a ruse, as Spider-Man intended to let the Symbiote have his original body back. The Spider-Man goons or lackies if you will, haul in the unconscious body of Cletus Kassady. The Symbiote violently separates itself from Wizard and re-attaches to Cletus. While Spider-Man attempts to neutralize Carnage but gets smacked down by the symbiote, and just as he is about to witness it devour a fallen Wizard; A massive lightning bolt strikes Carnage dead on. The strike was the act of revenge by Klaw who was waiting for the perfect moment to use the very last of his energy before he drifted and completely scattered into the atmosphere.  It was his last ditch effort to save his master and father figure, the Wizard, from certain death. Carnage and Kassady laid helpless on the ground the authorities sweep of Kassady and Spider-Man himself encapsulates the Symbiote, adding it to his already very impressive collection of villains.

Later on, at a prison hospital, it seems that due to contact with the symbiote, the Wizard has recovered from his aforementioned dementia, and finally reunited with his beloved son. But elsewhere, another man has experienced the same mental recovery. A man that was recently thought to be brain dead is now fully conscious and motivated. 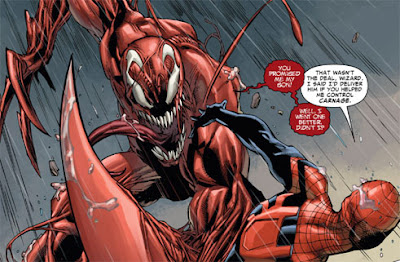 So now, the final battle has been fought and thus ends the story of Superior Carnage. So, what have we learned from all this?  Not much that we didn’t already know. Carnage is uncontrollable. The Wizard is a crazy evil genius, and Spider-Man is dog piling villains for his keep sake. Alright.

This story left me wanting more, and not more of the same but more detailed plot. It was too simply a story of a mad man trying to reunite with his an estranged son, and make one last attempt at glory. We all knew he was pretty much going to fail miserably, but in the end he did manage to make the connection and as a bonus, restore his sanity. I’d say that’s a win for him. And as for Carnage, well he got out of his cage and was able to run wild a bit, and after all that’s pretty much what we wanted to see. The idea of upgrading Carnage was interesting but ultimately I believe it failed. After revealing this new enhanced version of the symbiote , the series proceed to revert right back to the classic. What does that tell us? The creators didn’t seem to have much faith in the design or concept; so why should we?

Carnage seems to have found a home in these mini adventures, which is fine by me, but who knows if and when we will ever see him in a major Spider-Man saga. I’m quite fine with having him pop up his ugly head about once every 4 months.

This series was unique enough in that it tried to place Carnage under the control of a non Spider-Man character , but I wonder if it would have been better with out the actual web head. At this point I question whether Carnage needs to be strictly a Spidey villain or if pitting him against other heroes would work better. However there were a few parallels between Wiz-arnage and Octo-Spidey that were pointed out nicely; such as both of them being doctors, and both of them wearing the skin of their enemies. Those were nice touches by the writer.

Next up is Carnage homecoming and who knows what that will bring, but since Carnage overwhelms Spidey I’d love to see him tussle with someone more his speed. Why not Punisher and the Thunderbolts or Uncanny X-men? Make it happen Marvel.

So until we meet again, parting is such sweet sorrow.  And always remember, with great power comes great responsibility. This: