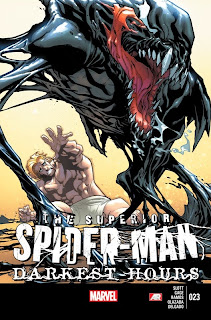 Part two of Venom meets Superior Spider-Man is here, and it ends with some pretty interesting changes.

This issue begins with the so called Crime Master, surrendering himself to the cops, afraid of the battle taking place inside the building -Agent Venom Vs Spider-Man.

In Superior Spider-Man # 22, Venom was blasted by fire and Sonic webbing, leaving him quite helpless. This issue begins with Flash, giving up, just like the Crime Master. Noticing that Spider-Man and his henchmen were looking for any excuse to kill him, he buys himself some time by surrendering, then throws gas grenades, and fires at the spider guys with stun guns.

Agent Venom then makes a run for it, guises himself and someone else and stays low for a while. Meanwhile, the blood thirsty Superior Spider-Man is furious and sends a message for the head of Flash Thompson! Just then however, he gets a call from Ana Maria, who says she wants to prepare the meal for Peter's 'parents'

Underground, Carlie is still captured by the goblins. The Goblin king is extremely unsatisfied that which Carlie's journal states that Dr Octopus is in Spider-Man's body, it does not state the identity of Spider-Man. Menace offers to get the information out from Carlie ( possibly torture). The Goblin King then takes off with Hobgoblins mask, presumably to teach him a lesson ( I think) 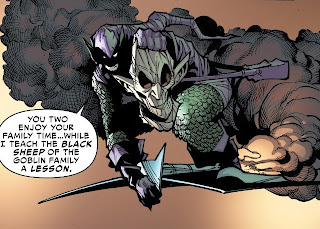 We later see Ana Maria and Peter going to Peter's apartment to cook brunch. She is slightly horrified to see so many gadgets and gizmos lying around, and gets Peter to clean the place up, much to his dissatisfaction.

Flash, in the meantime has been hiding in a hospital. He finds a wheelchair, relieving the injured symbiote of being his legs. On his way out, he overhears some cops talking about a party at Mary Jane's club for all police and firemen. This gives Flash the idea to go to Peter for help. 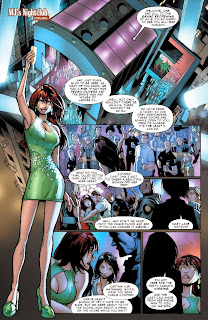 That night, at MJ's club, she is visited by Captain Wantanabe, who asks about the whereabouts of  Carlie. She tells MJ that Carlie's last call was to her. Mary Jane then decides to check her voice mail to find the message Carlie left her, warning her to stay away from Peter Parker. (Hopefully MJ begins putting the pieces together from here on)

Over at Peter's apartment, he and Ana Marie are cleaning up when Flash comes by for a visit. Peter is at first stunned as he has no memory of his past relationship with Flash. It doesn't take long however for him to realize that they were actually friends. Not wanting to let Flash go, Peter entertains Flash, thus missing Aunt May's operation, leaving Jay quite displeased. Aunt May's operation is a success, and she can walk perfectly fine without the use of a walking stick. Jay expresses some concern that Peter might become a workaholic like his son, the current Mayor.


The scene shifts to Mayor Jameson, who has enlisted Alchemax with a contract to build improves Spider Slayers, to take down Spider-Man. We have a small appearance of Michael O'Mara ( Spider-Man 2099) . 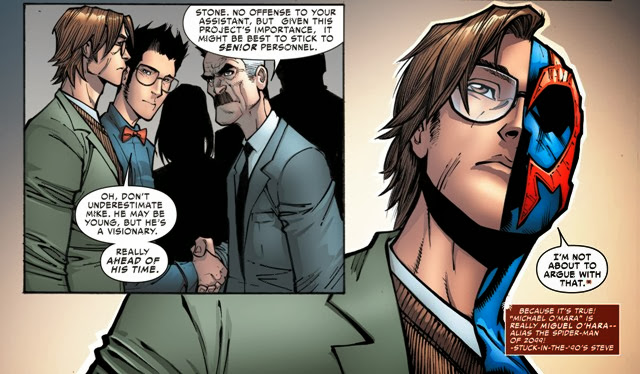 Over at brunch, Aunt May raises her concern for her future grandchildren if Peter is going to be serious with Ana Maria. This makes Peter extremely upset. Things get a little heated in the room and Flash offers to leave ( He stayed for brunch) Peter doesn't allow Flash to leave and offers to give him functional artificial limbs, following the success of Aunt May's operation.

Flash is hesitant at first but finally agrees, seeing that it could benefit people in the future if his operation is a success. Over at Peter Industries, Peter adds some 'things' to the equipment used for the operation. He then puts on his Spider-Man suit and conducts the surgery. The operation ends up being a success with the venom symbiote extracted and contained. Flash however is not impressed and believes that Spider-Man had approached Peter earlier to bait him. 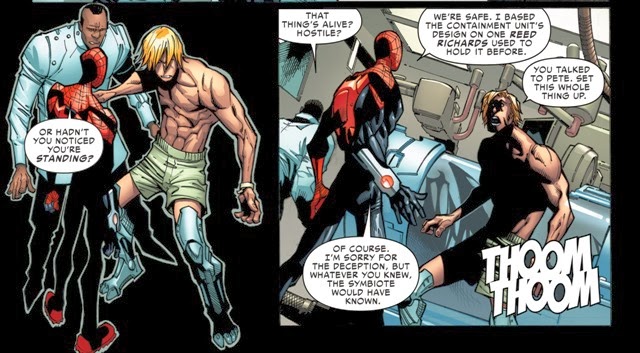 Flash tries to tell Spider-Man that the symbiote is now not under control and is extremely powerful. Venom escapes its containment and jumps onto Spider-Man as its hosts, becoming the Superior Venom!

I really am not too impressed with 'Superior Venom' at all as I am sure he will pose absolutely no threat. Some parts that I found interesting about this issue is the fact that Peter Octopus has managed to fix both Aunt May's and Flash's legs in one issue, in the same day!

Knowing Dr Octopus however, he probably planted some for a remote control device in Flash's artificial limbs to use for his own advantage in time to come.

Regardless, I think Flash will eventually re-bond with Venom. Needless to say, the aftermath of this issue will greatly damage the trust relationship between Flash and Peter.

As for Carlie's torture by Menace, I wouldn't be too worried about anything drastic happening to Carlie, nothing a comic character can't go through anyway.

Mary Jane being approached by Captain Wantanabe, I hope, will begin to send MJ searching for the truth about Peter Parker. Also, as a fan of the Peter MJ relationship, the silly flirting between Mary Jane and Pedro Oliver is also not appreciated. It is quite unlike Mary Jane to keep quiet and not call Peter as advised by Captain Wantanabe. She will most likely get in trouble a few issues down the road. 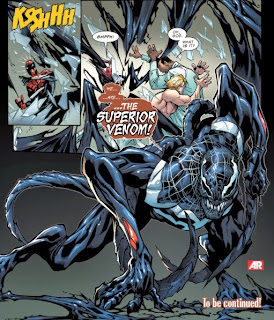 Aunt May, as I predicted, was not too careful with her words or thoughts regarding Ana Maria's height issue, resulting in Peter being greatly offended.

It was really good to see Spider-Man 2099 in the comic pages. Hopefully, as Michael O'Mara, he will find out that Spider-Man is not the same Spider-Man as before, and will end up playing an important role in the return of Peter Parker!