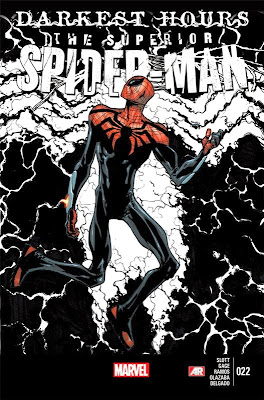 This is the first issue in which Superior Spider-Man meets Venom, aka Flash Thompson. It begins with Venom meeting Betty. Betty is running a story the new Crime Master and some arms dealing. She calls Flash, her ex boyfriend, who is also Agent Venom for some help. Afraid for those he loves, Venom tells Betty to get his mother and go somewhere safe. ( The Crime Master knew his secret identity) 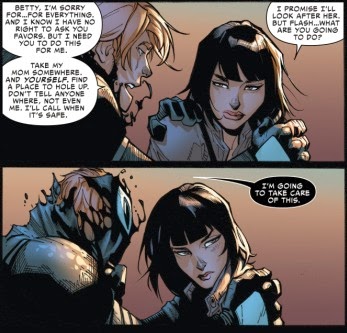 Meanwhile, Parker Industries has been launched! Aunt May and her husband come to visit on the opening day. We see that Dr Wirtham, aka Cardiac, whom the Superior Spider-Man almost killed last time is now working at Parker Industries. We also see Aunt May making a remark about another short employee of Peter's to Jay. Little does she know that this short employee is really Peter's new girlfriend whom she has been dying to meet.

In another scene, we see that Captain Wantanabe, aka Wraith, has found Carlie's apartment in a mess and decides she is gonna take Spider-Man down for this. Note: She does not know that Carlie was kidnapped by Menace in Superior Spider-Man 21 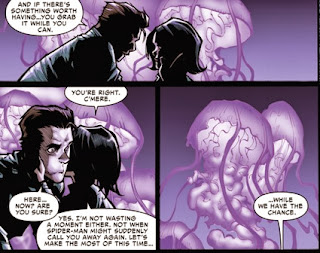 Somewhere in a room in Parker Industries, Peter and Ana Maria end up, presumably, having sex, when Peter asks her to meet his 'parents.' However, it is all cut short when Peter gets a call from his spider henchmen, reporting news of the sighting of Venom.

When Spider-Man finally arrives at the scene, he is given a new set of webbing by his henchmen. He then calls the cops to have them verify with the Mayor that they will not need to interfere in this case.

At the Mayors office, Jameson has grown tired of being blackmailed by Spider-Man. While mulling over his situation in disgust, he suddenly comes up with a plan. 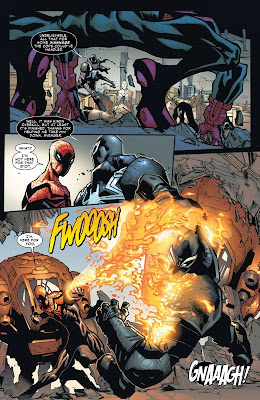 After receiving the green light from the Mayor, Spider-Man crashes into the scene where Venom has just taken care of the bad guys. ( It wasn't that hard as the new Crime Master was not the real Crime Master) Venom then hands the crooks to Spider-Man, only to receive a shot of fire webbing!

Spider-Man makes it clear that he is here to take Venom down. Venom retaliates, only to be shot with sonic webbing, causing the symbiote to come off. With the symbiote off, Flash tries to talk to Spider-Man, explaining that he is actually in control, and that he is a good guy. Unfortunately, for him, this Spider-Man is not the same Spider-Man he once knew.

I'll start up at the top. The first thing I'd like to say is that Aunt May is going to be in for a big surprise once she finds out that her nephew is dating Ana Maria, a midget. Aunt May's character is not one that would judge another, nor one who would disapprove of Peter dating a girls just because she is a midget. However, a surprised look on her face, or an accidental comment might just cause 'Peter' to show some form of resentment towards Aunt May.

The next topic of interest would be the progression of Peter and Ana Maria's relationship. In this issue, they have taken things to the next level, which will probably leave fans crying " RAPE!" On this subject, I really have nothing to say besides, Ana Maria is going to be pretty angry when she finds out she was sleeping with Dr Octopus!

Next we have Mayor Jameson, who has devised an escape plan from his situation, which has something to do with robots. I really have no inkling as to what this might be. However, a failure to execute his plan, which I predict, will most likely lead to the end of his term as Mayor. ( It has to come sooner or later right?)

Finally, where Venom is concerned. I think that this encounter, like Kaine's encounter with the Superior Spider-Man is going to have long lasting effects on the mental health of Venom/ Flash. Flash was Spider-Man's biggest fan, of whom he modeled his career as a hero after. It is quite likely that Flash could turn bad, or at least Anti-Heroish after these events. The slightest hint of depression or lack of will in Flash could case the Venom Symbiote to take control.