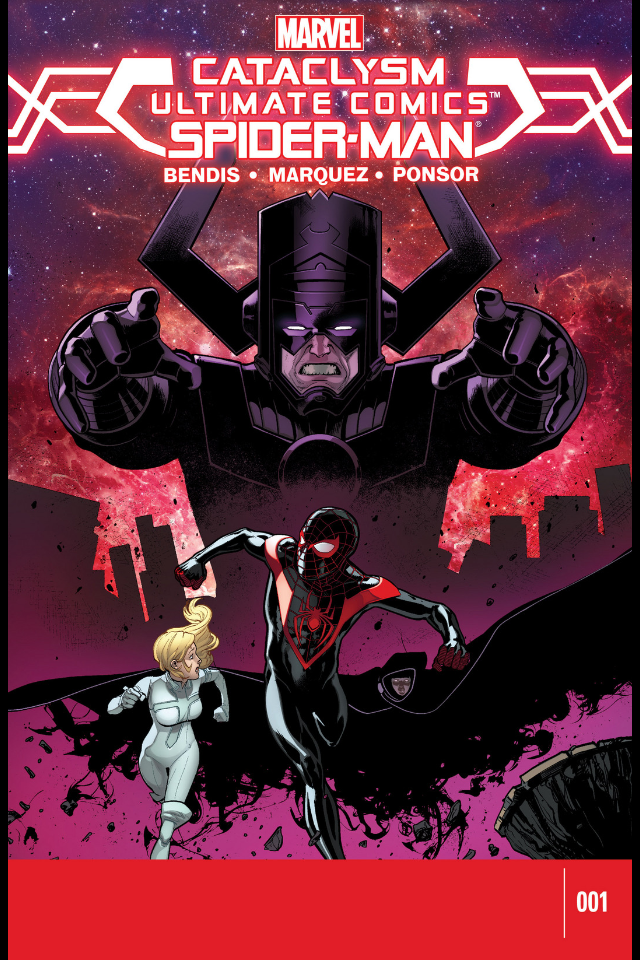 Hello everybody and welcome to my review of Cataclysm: Ultimate Comics: Spider-Man #1, kind of a mouthful there Marvel. 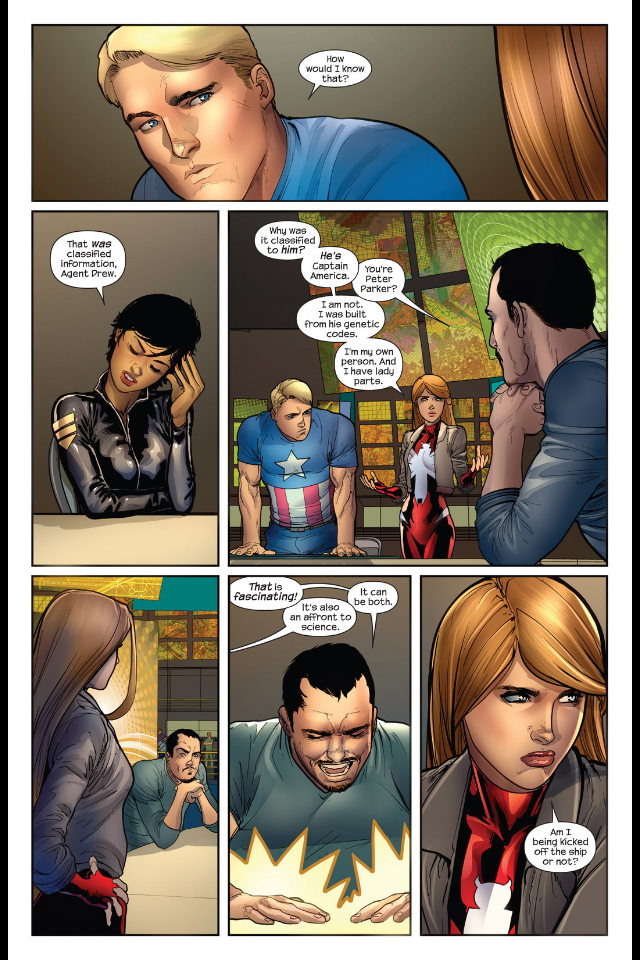 On board the S.H.I.E.L.D Helicarrier (one day before the coming of Galactus), Jessica Drew is asking S.H.I.E.L.D Director Monica Chang if she's fired from the Ultimates while the team all enjoy some Chinese takeaway (No shawarma? Boo!) Through their conversation, the other team members learn about Jessica's status as a clone of Peter Parker, as well as her taking down Roxxon with the aid of Spider-Man, Bomshell, Cloak & Dagger. Monica tells her that they'll discuss it later, but Captain America doesn't see the point since Roxxon was a "bad person". Monica points out that S.H.I.E.L.D has defence contracts with Roxxon which makes the situation more complicated. In spite of this, Jess wants to lead a full investigation of the corporation whether Chang fires her or not. Chang's response to that is "maybe" (which kind of means yes). Cap and Tony Stark then steer the conversation to Spider-Man, asking Jessica how he did. Jessica replies that he's honestly amazing (well it's better than "superior" that's for sure.)

We then flash to Miles at school where he's fallen asleep in class (I know the feeling). He's woken by his teacher and just barely wriggles out of having his dad called to the school by telling her what Executive Order 11110 was. He later suits up as Spidey and halts a street fight, getting hit with his first beer in the process. The cops soon show up, but their reaction isn't what Miles was expecting. 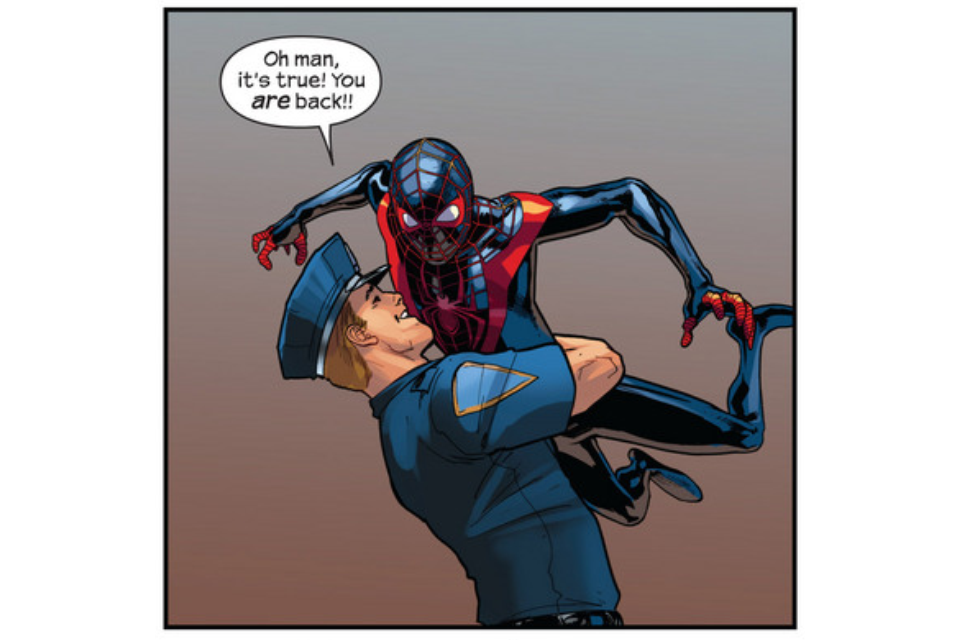 Meanwhile, Lana Baumgartner is meeting he parole officer, who is also ticked off at her for using her powers, which breaks the arrangement of her parole (she can go free as long as she doesn't use her powers). Lana argues back that she never knew what it felt like to be a hero, to do the right thing, but this falls on deaf ears. The conversation ends with her storming off after incinerating the guy's phone when he tries to call the authorities. As she runs out of the room, she sarcastically thanks her mother for the trouble she's landed her in.

Elsewhere Dagger is asking Cloak to take her back home so she can tell her mother she's okay. He's reluctant at first since she convinced him that they couldn't go home previously, but he soon complies and takes her there. It turns out however, that Tandy's family moved out some time ago, with the house now boarded up and for sale. Ty wisely takes a distraught Tandy away from the scene. She asks him what they do now. Cloak suggests they become superheroes like Spider-Man since he really enjoyed it, something Tandy agrees with. Just as she jokes about finding a pretty big villain to hit, they both witness the Helicarrier and several other fighter jets headed towards Galactus in the distance... 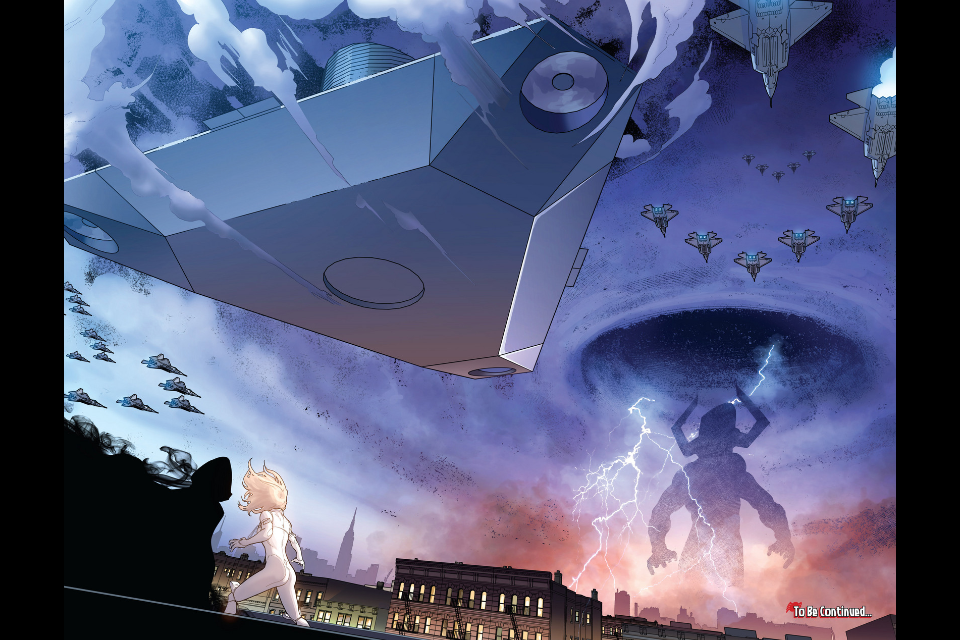 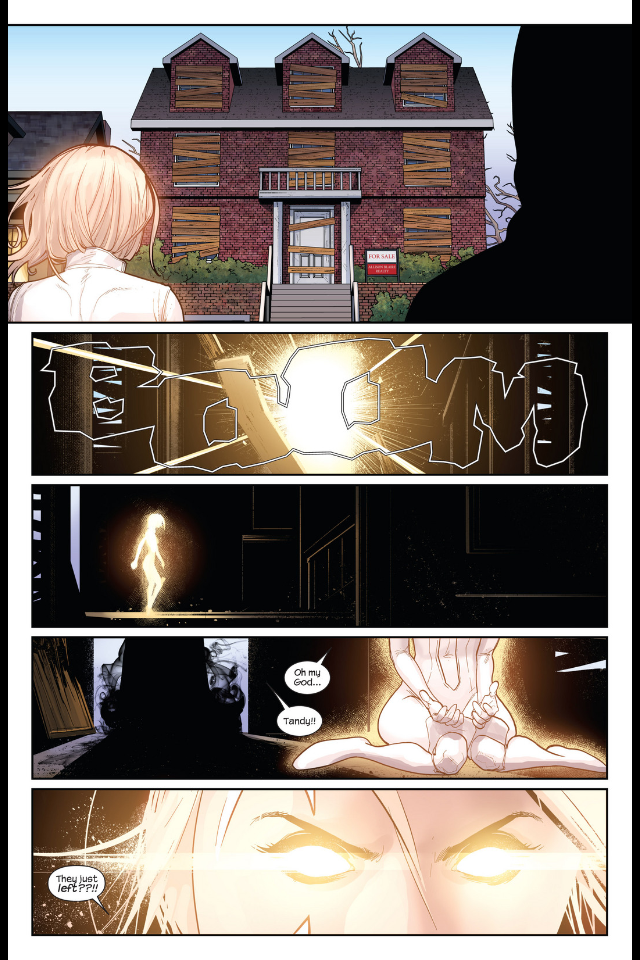 This issue reads less like a tie-in to Cataclysm and more of a continuation of the regular Ultimate Spider-Man series, which is absolutely a good thing. It would have been very easy to pick up after or during the first issue of Cataclysm, but Bendis has instead built upon what he established in the last issue of Spider-Man No More.
One of the characters who benefits the most from this focus is Bombshell. We see she was more a victim of her upbringing than an actual supervillain with malicious intent. Bendis doesn't waste the time we spend with Lana, by the end of her scene we have a much better sense of who she is. Miles' funny moment with the police is pretty unique. I don't think I've ever seen anyone writing Spider-Man call attention to how up and down the cops' feelings about Spidey tend to be.

Cloak & Dagger also benefit from this issue, especially as they were starting to fall by the wayside in the previous arc. Dagger's plight in this issue is interesting, because while we can understand her rage, we also can't blame her family for moving since they likely did so to escape the painful memories of her "death". Spider-Woman's scene with the Ultimates also demonstrates how different this universe's premiere super-team are to the Avengers (though they aren't unrecognisable), something all the more relevant with the presence of Galactus.

I'm so glad that David Marquez has remained on-board with this arc as his artwork has been fantastic from the get-go, and he continues that winning streak in this issue. The final page in particular is suitably epic, just teasing us with the sight of Galactus in the distance as well as the sheer scope of what's to come. While I'd rather that the Cataclysm title wasn't slapped across the title, this is a very strong continuation of Bendis & Marquez' work on the main series. It'll be interesting to see where Bendis takes the "Young Ultimates" next with the coming of Galactus (seriously Marvel, Young Ultimates, think about it ;).)... 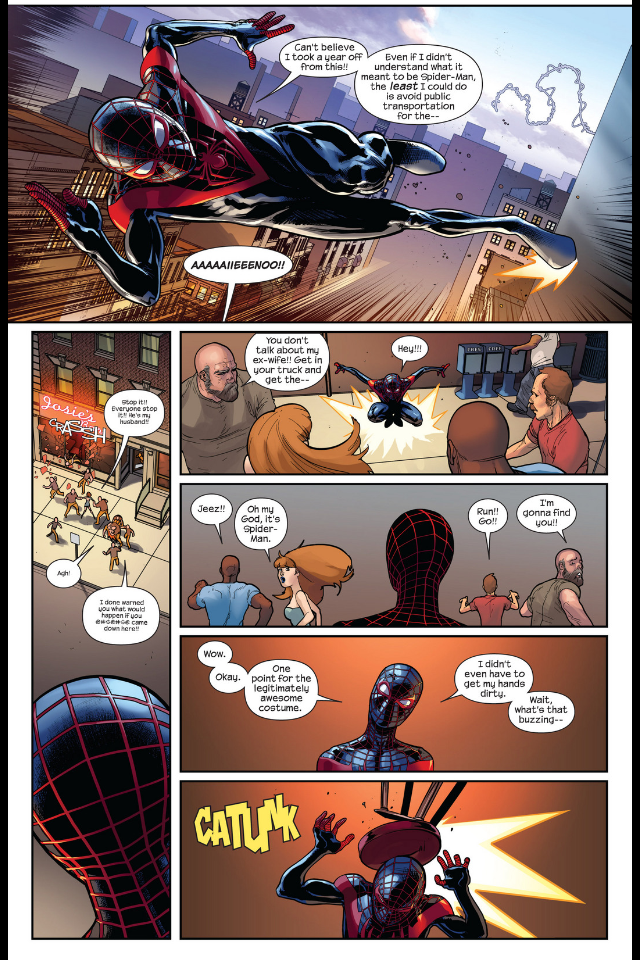