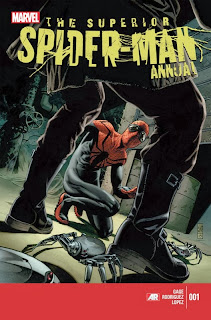 This issue features the return, and possibly exit, of an old super villain - Blackout! The half demon has returned to build a name for himself.

It begins with an old associate of the King Pin, giving some information about Peter Parker to an anonymous character. He then opens his briefcase, which was to be his payment for the info, only to find that it is filled with newspaper. Our anonymous character then kills his client, saying that the name Blackout will once again be associated with murder. ( The anonymous figure was Blackout in case you did not catch that )

Over at Aunt May's home, Peter is enjoying her homemade pancakes. Aunt May and Jay are glad to have Peter over as he has been away for some time. When given a moment alone, Jay approaches Peter about his involvement with Spider-Man. He warns Peter that this association will attract danger to Aunt May's life.

Peter assures Jay that no harm will come to them. As he leaves Aunt May's place in a subway train, he gets an alert by one of the spiderbots, of danger over at Aunt May's home. Peter rushes back to Aunt May's place, only to find Jay Jameson there alone. Apparently, Blackout had taken Aunt May hostage, asking Peter to sabotage Spider-Man's equipment, making him vunerable. Blackout also left a phone with which Peter was to answer a call from, when it rings. 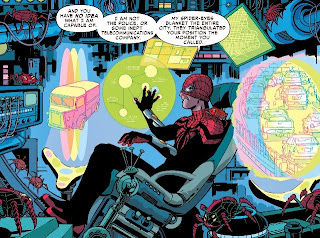 When the phone finally rings, Peter answers it, demanding to know that Aunt May is still alive. After having received proof of life, Spider-Man determines Blackout's location ( I'm not sure how). He then consolidates Danny Ketch, a former Ghost Rider, who had battled Blackout.

For a moment Spider-Man also considers asking the help of Dr Strange, but decides it to be too risky of revealing his true identity.

To cut it all short, Spider-Man beats the $#!T out of Blackout after almost being killed himself, releases Aunt May, then tortures Blackout until he willingly agrees to spread the word that no one is to ever disturb anyone close to Peter Parker ever again. Also, Aunt May secretly witness the dreadful torture that Spider-Man performed. 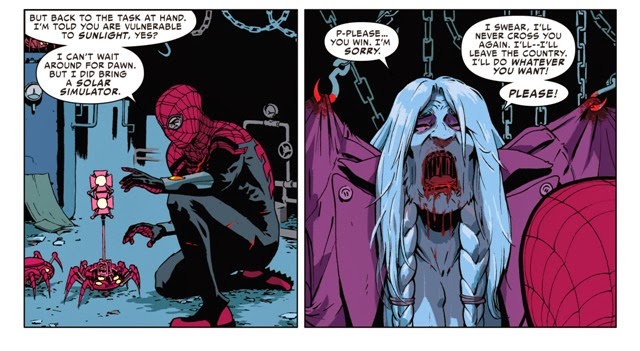 In the aftermath, we see that the news of what has happened to Blackout has spread to all, from street thugs to the Goblin King! The Goblin King however refuses to heed the warning.

I thought this was a great story. Simple, concise and completed in one issue, with the possibility of more stories branching from this one. It is an issue you could do without. Nevertheless it was an enjoyable read. I'm glad that they factored in the possibility of Dr Strange finding out Spider-Man's identity. I was afraid Dr Strange would gladly help, not detecting that Spider-Man is not who he says he is.

The only problem I have with this issue was the fact that Spider-Ock, never showed any reference to pain resulting from this.. 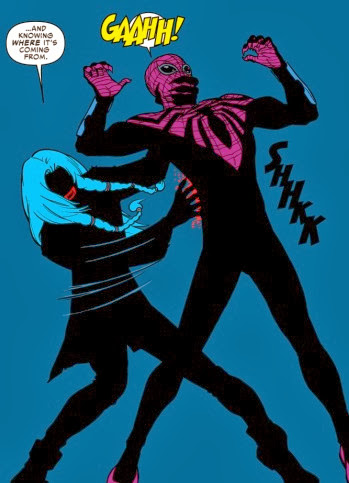 I'd think that hurt a fair bit, puncturing organs and stuff.