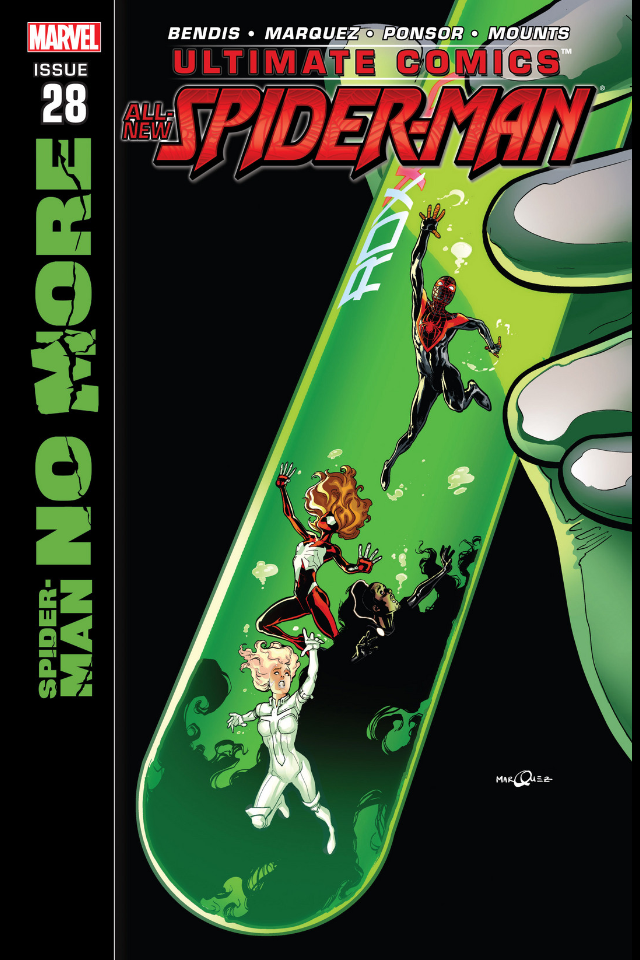 Hello everybody and welcome to my delayed review of Ultimate Comics: Spider-Man #28 (so terribly sorry about that, my dears), the conclusion of the "Spider-Man No More" story arc, even though Miles has resumed being Spider-Man for several issue already so that's a pretty redundant title right there. 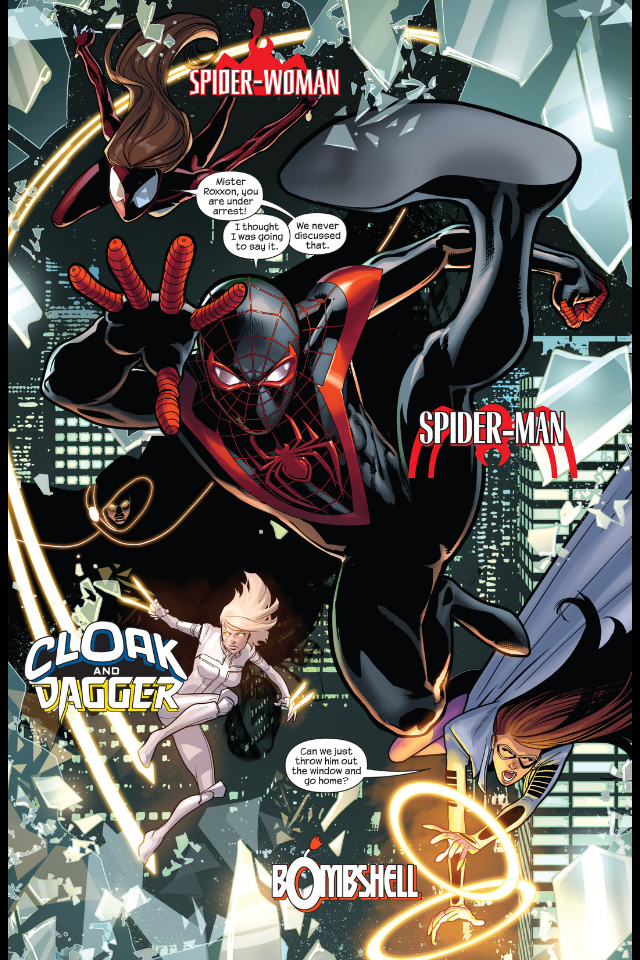 At the Roxxon Industries tower, Mr. Roxxon's security inform him of Taskmaster's defeat and that Spider-Man & the Ultimate Super Friends (sorry, I couldn't resist) are on the way. They attempt to evacuate him from the building, only to spot the heroes headed right for them. Roxxon orders his head of security to call up his science team as Spidey and co come crashing through the window, with Spider Woman declaring that he is under arrest.
Roxxon scoffs at her authority and shocks Miles by revealing that he knows his secret identity by referencing his mother's death, receiving a web to the face from an angry Miles. Roxxon yells that they have no authority over him, even suggesting that they should thank him for their powers, which prompts Dagger to take out half of his security, which in turn scares the rest off (Yeah, Roxxon needs to work on his people skills a bit). Spider-Woman is unfazed by Roxxon's attempts to intimidate her, but Miles decides he's had enough and webs the jerk again, this time throwing him out the window to hang upside down from a webline so they can have a private chat.

While dangling there, Roxxon rants about how he was the one who hired Miles' Uncle Aaron to break into Oscorp and steal the spider so he could duplicate the accident that created the original Spider-Man, which is ironic as the operation led to the creation of the new Spider-Man (which Roxxon himself notes). He says it took him all of three days to figure out who Miles is and that the people he's in business will shut him and his friends down, just like they did Miles' dad. He also claims that one day Miles will come to work for him once he realises how pointless his quest is. Miles (who has been silent up until now) simply reiterates that Roxxon is under arrest, just as a police helicopter arrives.

Noticing the copper choppers, Spider-Woman uses her S.H.I.E.L.D contacts to get them to stand down, leaving Roxxon looking more than a little stupid and the other teens impressed with Jessica. Cloak suggest they should leave with the idiot, but as if on cue, the Brain Trust (LAME!) arrive to stop them. 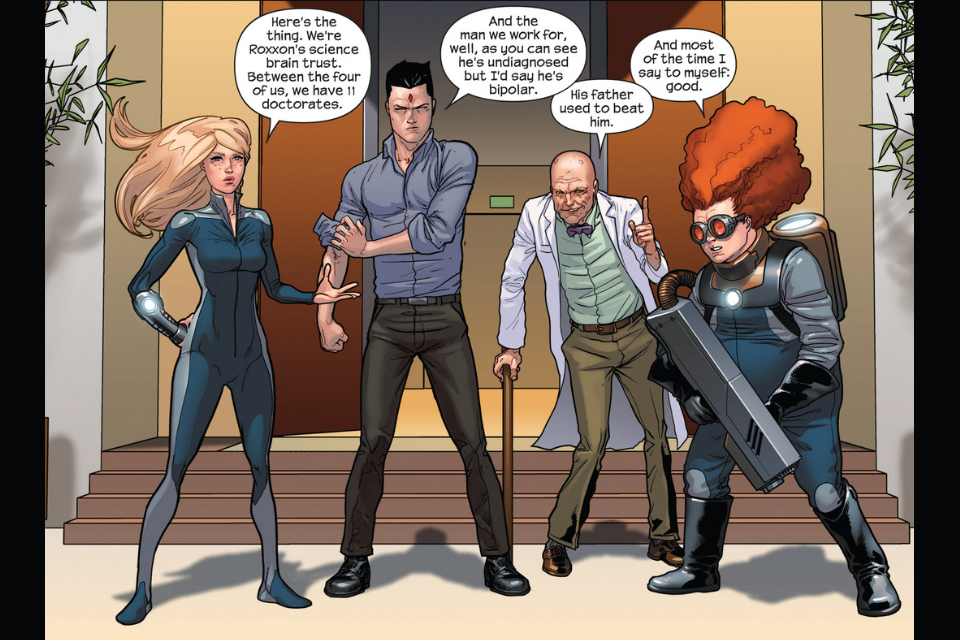 Seriously guys, you couldn't think of a better name?
Jessica places them under arrest too (Boy, she and Miles like saying that), but Layla Miller has other ideas and activates a micro neuroburst in their heads with a remote. As the group writhe on the floor in agony, the scientists prepare to take them back down to the labs. 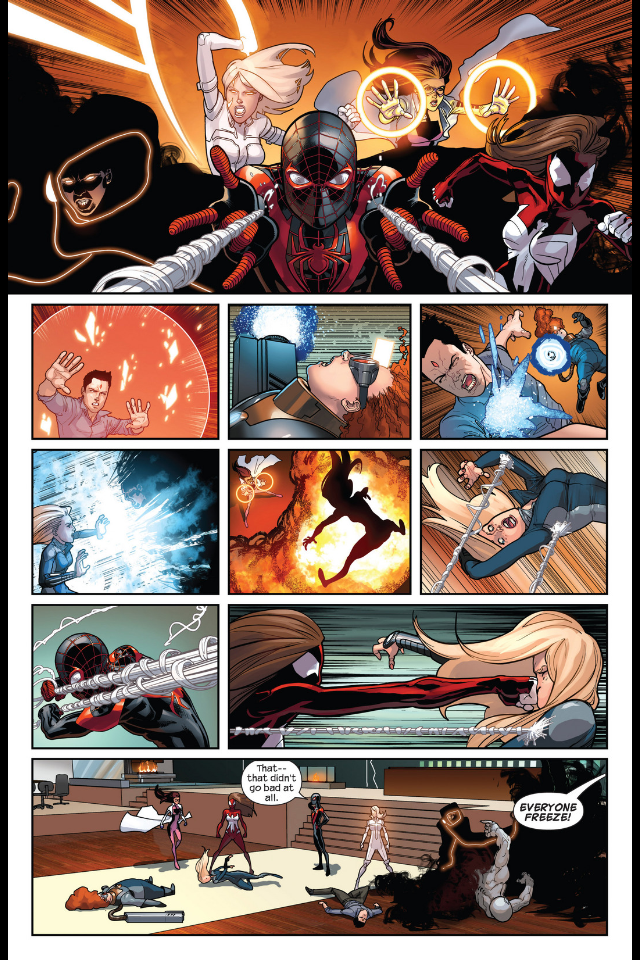 But, like a streeeaaak of light, Miles arrives just in time to web the device out of Dr. Miller's hand and kick her right in the face, commenting that she shouldn't take it personally that he has nothing snappy to say since he's a little rusty (I reckon she's more concerned with the state of her chin Miles). Samuel Sterns Hulks out (sort of, he's like the Diet Coke of Hulks really), but the newly revived Cloak envelops him in his costume, disabling him. The rest of the "team" attack and the Brain Trust are quickly subdued (looks like the eleven doctorates proved pretty useless). As S.H.I.E.L.D agents arrive to to clean up the situation, the teens part ways, though Bombshell enthusiastically declares that they should do this again.
Later that night, at Brooklyn Visions Academy, Miles arrives at his and Ganke's dorm, disturbing Ganke's read of Tony Stark unauthorised biography, Man of Iron (that book should so be worked into the Marvel Cinematic Universe). Miles apologies for upsetting his friend and thanks him for sticking by him, he also tells him that he was right, he IS Spider-Man (yes you are).

Meanwhile, Jessica Drew is being questioned over her actions against Roxxon by S.H.I.E.L.D Director Chang. She calmly explains her reasons for doing so and shows Chang files of the other heroes, commenting that she thinks they "have the beginnings of something special" (Personally I think New Ultimates has a nice ring to it)... 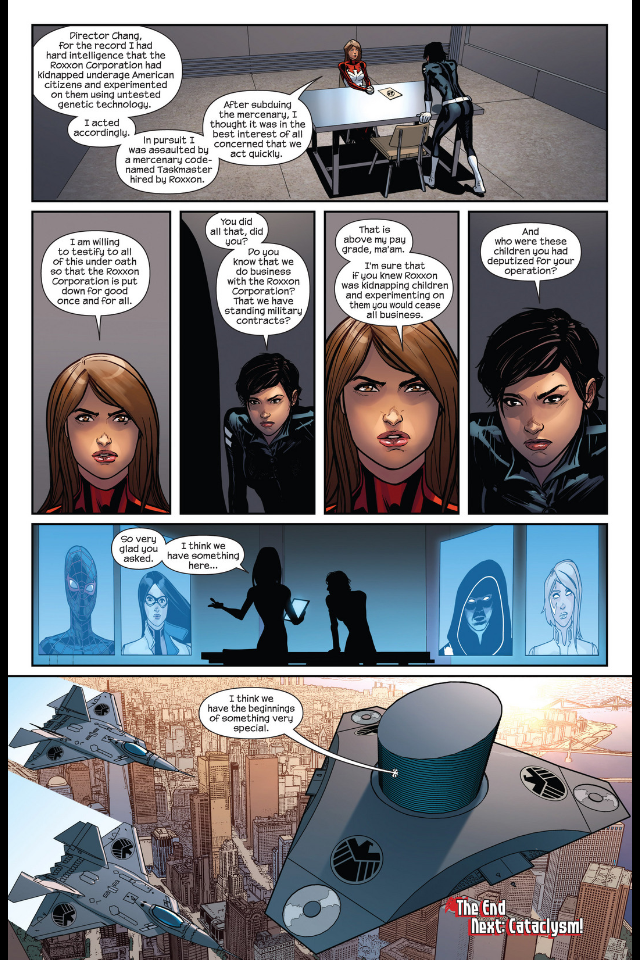 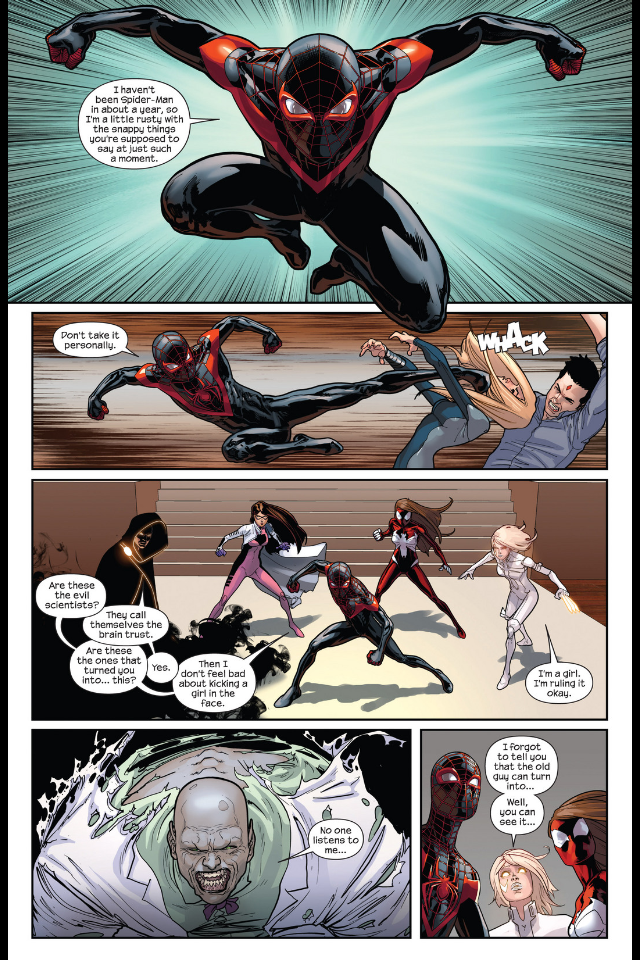 After plenty of build-up to the showdown with Roxxon, Bendis manages to subvert expectations and close this story arc out with a satisfying issue, making me all the more concerned for this series existence with the coming of Cataclysm.
After spending a couple of issues with less focus on Miles Morales, I was a little worried that he'd get lost in the shuffle by the end of this story. Thankfully that's not the case as Miles gets plenty of good moments and a couple funny one-liners. While it was no surprise that the arc ends with a hint that Miles, Jess, Lori, Ty & Tandy would form a new team, I liked the way Bendis gave them something in common since they all resulted from Roxxon's experiments. It's also refreshing that the group take down the Brain Trust with little difficulty, considering Bendis could easily have milked a whole other issue out the two teams facing off. Roxxon, while certainly the standard evil tycoon, is given enough personality by Bendis that his three page spewing of exposition and insults is entertaining when it so easily could have been trite.

David Marquez does a fabulous job as always with the artwork. The layouts are dynamic, the inking literally shines and Justin Ponsor's colours really pop. When Miles appears unmasked near the end, he almost looks a little older thanks to a subtle touch from Marquez, which is great considering the growth he's gone through in this storyline.

While there are a few minor problems (I personally thought the issue ended a little too fast since it would've been nice to see the reaction of Gwen Stacy and Aunt May to Miles returning to the costume), Bendis has impressed yet again with Ultimate Spider-Man and looks to be taking Miles to interesting places in both his relationship with his father (whose past might hold the key to his distrust of costumed vigilantes) and his role as Spider-Man...that is unless a certain Devourer of Worlds has anything to say about it... 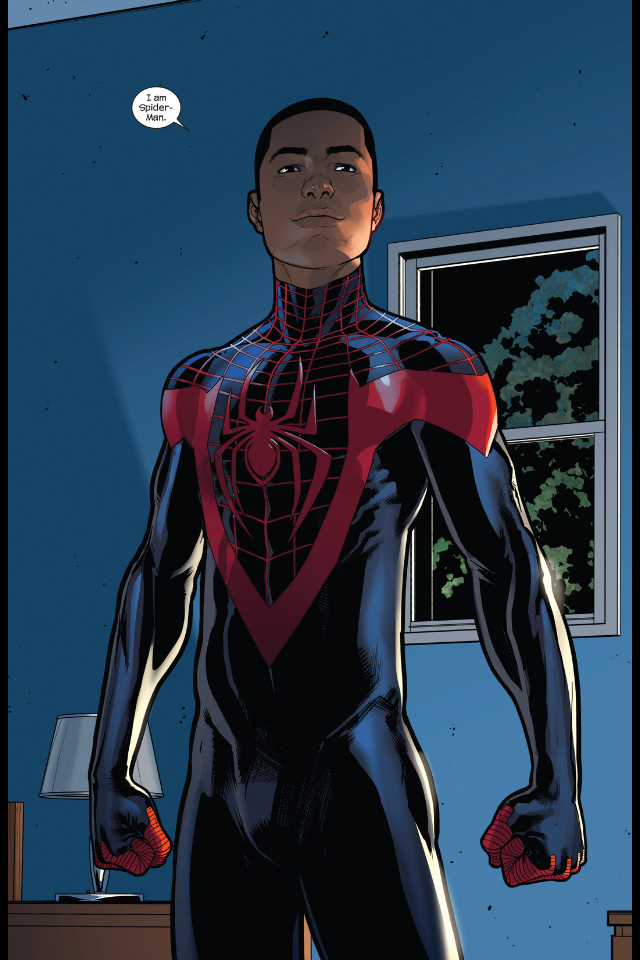