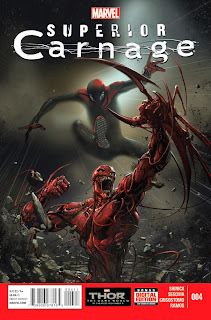 Previously, the Wizard kidnapped Cletus Kassady and the carnage Symbiote and trans-modified him onto Dr. Malus; thus creating the Superior Carnage.

Along with his henchmen Klaw, they stormed City Hall in an attempt to control the city, but little did they know, the Superior Spider-Man anticipated this.

Now who will win this exciting skirmish? What will the outcome be when these forces collide? Find out below.

Story:  Spidey quickly escorts Mayor Jameson to safety, while commenting that his spider soldiers are more than capable of neutralizing the enemy, but as fate would have it, they were not. Despite being equipped with super sonic weaponry (any symbiotes worst nightmare) Carnage disposed of them rather quickly and easily. By going commando, and tossing Chinese stars, Carnage renders them unconscious (or dead perhaps), allowing the Wiz and Klaw to concentrate on the Web Head. Ole Spock manages to outmaneuver them all the while schooling them on what exactly makes him “Superior”. Spocktopuss aims Klaw’s arm cannon at Carnage and misses but alternately blows a whole in the wall large enough for more spider soldiers to join the frenzy. Carnage opportunistically tosses a hand grenade catching Spidey and the others off guard.

Finally Spidey decides to tackle the leader of the assault and throws himself onto the Wizard. He then carries him to the peak of the building, and tries to convince him to make the others surrender. Yet, in a desperate attempt, the Wizard decides to read Spidey’s mind. He surprisingly recognizes Octavius. This causes Mr. Superior to drop the Wiz, landing him directly onto a parked car. The result is a shattering display.


The impact causes Wiz to loose mental control over the red symbiote and Carnage senses this, immediately seeking revenge on Klaw for his earlier attacks. Outside, Spidey admits to Wiz his secret ID, and even agrees to help him reconnect with his estranged son, in exchange for Carnage submitting. However, Spock admits to himself that he’s only bluffing and actually expects Wizard to die sooner than later.
Suddenly Carnage slashes Spidey across the back and notifies him that his Spider Patrol has lost their ability to speak due to his removal of their tongues (Weird !). Spock goes for the Wizard trying to convince him to make Carnage surrender, but Klaw snatches him and rebukes him for interfering with his master’s scheme.

Klaw unleashes powerful sound waves into Spider-Man’s skull. Spidey attempts to warn Klaw, but it’s too late, as Carnage has struck the final blow straight through the heart of Klaw.  Carnage reveals to Klaw that he borrowed vibranium from the Wiz to impale him.  The breach in Klaw’s body as result of the vibranium, causes an immense outburst of sonic energy, destroying him and sending the others reeling. Spocktoman gets up from the devastation only to find that the Symbiote has a new host….the Wizard.

So there goes city Hall, and Klaw along with it. I wonder where Jameson will hang his hat and coat from now on. By a show of hands how many people already knew that vibranium was Klaw’s weakness? How come I don’t see any hands?

This issue had great action and chaotics, making it the best so far. I’m really digging the art. Beautifully rendered close ups. Expert lighting in most cases. Decent story.

So this was the 1st time anyone actually realized that it’s Ock behind the mask. Interesting.  So Ock probably only admitted it because he knew Wiz was about to die, but now that he has become Carnage, who knows what horrible repercussions that knowledge will bring.

So Dr. Malus had a very short stint as Carnage. I wonder if the symbiote will have mercy on it’s former host, or will Wiz be hell bent on revenge for the blatant murder of his loyal assistant Klaw?

Join us next time when the Spider goes up against Wizarnage? In the final chapter of this hair raising, nail biting, face clawing series.