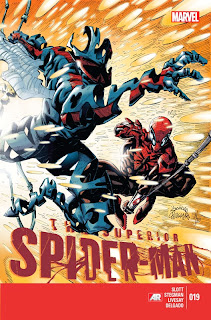 
This is it, the end of  the 'Necessary Evil' story. This issue was spectacularly mind blowing! Lots of thing happen in this issue with lasting consequences, the very ingredient to make an comic worth reading!


It begins with Wraith threatening Antoine Morant, a banker to crooks. We last saw Wraith tracking down the money used to pay for Spider-Man's new army. Apparently, this is where her journey brought her. Carlie and Wraith end up in a car chase, tailing Antoine.

Meanwhile, back at Horizon, Spider-Man 2099 is knocked out, leaving no one to stop Horizon from exploding. Superior Spider-Man, who knocked Spider-Man 2099 out in the first place, is quickly updated on what is happening. With helpful intel on Tiberius Stone's past actions that caused the problem they now face from Grady, who just came back from spying in the past, Spider-Man devises a plan to prevent the lab from exploding.

Max reminds Spider-Man however that he needs Peter Parker, who knew the equation to stop the Reverbium from vibrating violently, which is causing the explosion ( in very layman terms). Unfortunately for the Superior Spider-Man however, he no longer has Peter's memories to recall. As such, he tries his best to access some past memories of Peter's that he had already previously accessed. 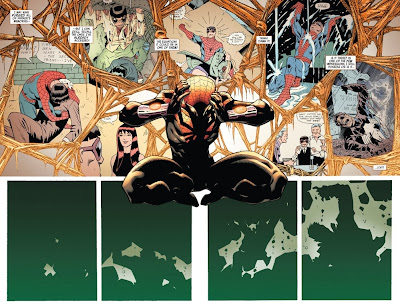 He is soon awakened by Max, who tells Spider-Man that they need to hurry and that he has spaced out for eight minutes already trying to think!

Just then, Spider-Man 2099  wakes up, certain there would be no problems as "Parker is here." Unable to recall Peter's memory, Doc Ock, as Spider-Man decides to calculate the code himself, as he is more 'Superior' that Peter. Realizing that Spider-Man does not actually know the code, he tells everyone to get out of the building.

Tiberius Stone however is held inside the building by Spider-Man 2099, who decides that it is better for Stone to die and never create the evil timeline of 2099, even if it means his own life being wiped from existence. 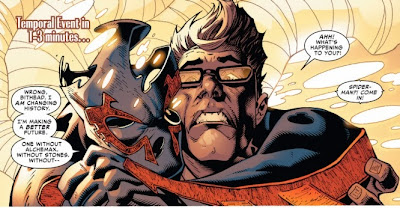 Unfortunately, Superior Spider-Man realizes that he is actually inferior when his code is wrong, resulting in the explosion of Horizon Labs. Spider-Man 'dies' in the explosion, while Spider-Man 2099 changes his mind half way and decides to come running out with Stone.

Back in 2099, realizing that everything is back to normal, Tyler Stone decides to trap Spider-Man 2099 in 2013. With absolutely no contact with 2099 other than an artificial download of Lyla, Spider-Man 2099 proceeds to work for the newly established Alchemax under the guise of Michael O'Mara.

Due to Max's past friendship with Marla, Mayor Jameson decides to let Max off all the lawsuits if he promises to shut down Horizon for good. Max agrees, but breaks his agreement immediately in an effort to bring back Spider-Man to life. I really have no words to explain how they did that, so I'll just let the panel to the explaining.

Superior Spider-Man returns back to life, shouting about not hearing the last of Doctor Octopus! Before he finishes his sentence however he realizes he is back in normal time. When asked about where he went or what happened, Spider-Man said he could not remember.

Spidey goes back to his apartment to answer sixteen new messages, most of which are from Mary Jane. Fake Peter decides to call MJ, who answers the phone telling him that they are through for good, once and for all.

Max and the Horizon crew leave in a boat, leaving Uatu and Sajani behind. Uatu stays behind intentionally while Sajani is not allowed to come along since she lied to Max about destroying all the Reverbium. Just then, Sajani receives a phone call from Parker, who has a proposition for her.

In the final scene we see Carlie and Wraith have finally found proof that the money for the Spider Army has been coming from Otto Octavius' bank account!

There is a lot to process after reading this issue. Firstly, we now have Spider-Man 2099, stuck in 2013! This itself is a major status quo change. We now have a new character in this timeline, which would mean to more team ups. It also means we have a good Spider-Man back in New York! This could possibly lead to a new title spin off, which we will then need a reviewer to review on this site!

As another person who knows Peter's secret, Spider-Man 2099 could be essential in bringing the real Peter Parker back to life.

Next we have Mary Jane, who is finally over Peter Parker. While this may be considered a good thing, I do hope she does not move on too fast, and become a whole different persons before Peter comes back. What would be more damaging would be if she started dating someone else seriously as well!

Third, we have a new situation with Spider-Ock. In Superior Spider-Man team-up # 4, SpOck was doing 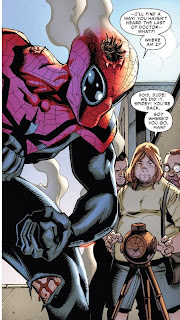 things he usually wouldn't do, that were very Parker like. In this issue, if you look at the scene where Superior Spider-Man is trying to recall Peter's memories, you will find that the abstract art shows Peter Parker, emerging from the rubble he was buried under in Superior Spider-Man # 9. ( See the image above carefully)

It is possible that Peter's emergence could be the reason for Spider-Ock going into coma for eight minutes. Also, at the end of the issue, when Superior Spider-Man is brought back to life, he returns in a dialog that resembles a super villain losing a battle, which, for some reason he was unable to remember. One theory could be that he was in a battle with Peter while he was 'dead.' This would seriously explain Spider-Man's unusual behavior in team-up # 4.

Finally, we see that our Superior Spider-Man has a huge ego blow as he realizes he is actually inferior to Peter, being unable to stop the explosion!