This issue, being part two of the last story involving Fulmina planning to remove technology from earth while they are being attacked by aliens, takes off right where we ended in Superior Spider-Man Team Up # 3.

At the start of this issue, our Superior Spider-Man swings through the city, planning a way to stop Fulmina. Strangely however, as he swings to achieve his main objective, he cant help but feel compelled to stop petty crimes, save lives and other "minor distractions" as he calls it. For a moment Spider-Ock wonders how he could be so foolish to waste precious time being distracted. He finds himself doing things he would not normally do, including making silly jokes as he fights, much like Peter Parker would. 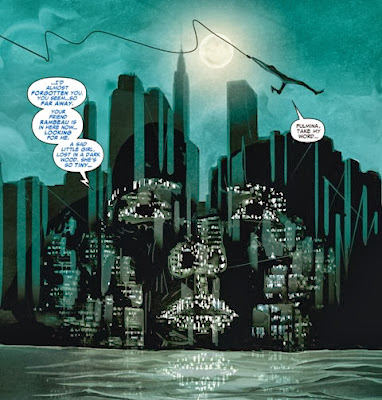 Throughout the whole issue, Spider-Man is communicating with Fulmina through his earpiece. Eventually, Spider-Man reaches his destination - Horizon Labs. In the part of the story that confuses me slightly, Spidey reaches his lab, and puts on the same helmet used to fight Peter in his mind. Somehow, he manages to trap Fulmina in his mind as well ( which is the part that confuses me)

In the next scene, we see Spider-Man talking to Sylvia, no longer in her Fulmina form. They are having breakfast at a coffee shop, in his head. Spider-Man tries to convince her that she should not be Fulmina any more. He explains to her that bringing the world back to the dark ages, without technology is not going to help them.

Outraged and frustrated, Sylvia jumps to attack Spider-Man, who for a split second transforms into Doc Ock! Sylvia notices the change and realizes that see too can change her form if she likes. She quickly resumes the form of Fulmina, threatening to kill Spider-Man.

While the two continue to argue in Spider-Man's head, a spiderbot alert goes off, warning of a second armada attack over the city.

Spider-Man leaves to see what they are up against. In shock at the size of the warship, Spider-Man explains to Fulmina that it is not only humans who have evolved with technology, but the entire cosmos. With nothing else to say, Spider-Man releases Fulmina to do as she wishes.

To his surprise, Fulmina uses her electrical powers to destroy the alien war ship, and in turn, seemingly destroying herself in the process.

At the end of the day, Spider-Man hold much respect for Fulmina who exceeded his expectations! 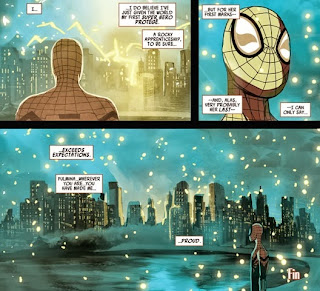 While, Fulmina seems to be a short lived character who was introduced and killed in two issues, this may not yet be the last we hear of her. A few things still remain unknown about Fulmina however. It is still unknown how she became an electrical being. We do not know what caused her transformation. We also do not know what has become of her physical body.

What I found even more interesting however, was the fact that Spider-Ock was starting to behave a little like the Peter Parker Spider-Man would, especially in the scene where he went out of his way to save the people in the hospital.

Once again, we see no team up factor in this issue. At one point in the issue, Luke Cage had sent Monica Rambeau to take care of Fulmina. Instead of aiming to work together, Spider-Man insisted that he was perfectly capable of handling himself.

So much for the team up!