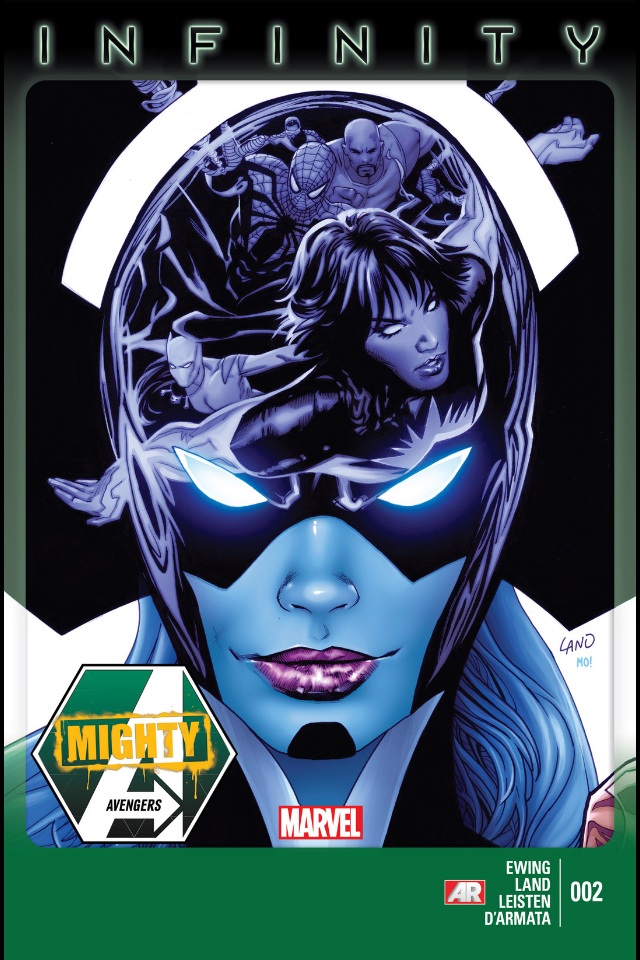 Hello everybody and welcome to my review of Mighty Avengers #2. 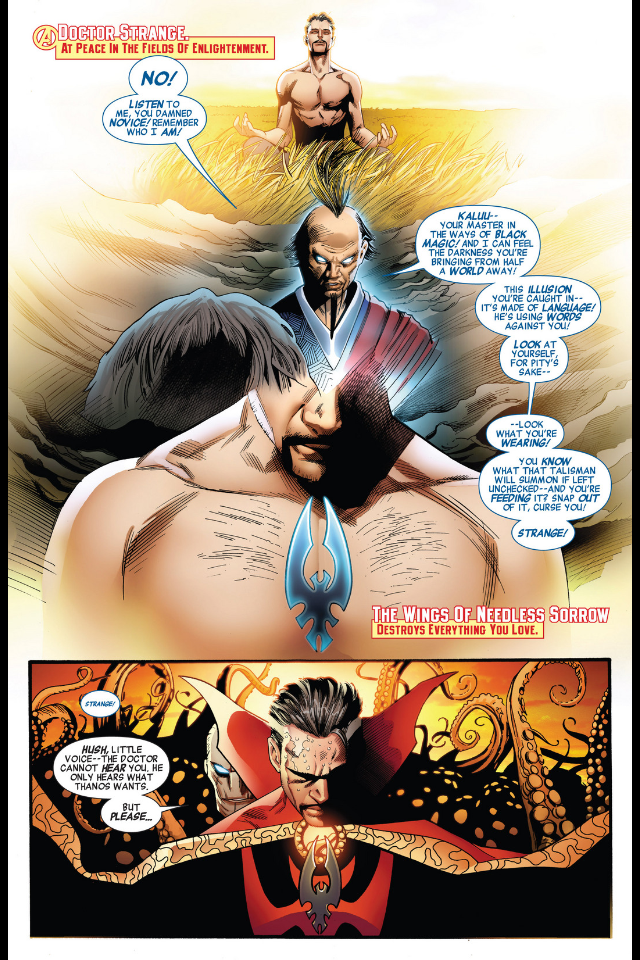 In the Fields of Enlightenment, Kaluu, master of the ways of Black Magic, attempts to get through to Dr. Strange, who is being manipulated by Thanos' henchman, the Ebony Maw, into summoning something demonic. Suffice to say, it doesn't work.
We then cut to the undersea science fortress of another doctor, Adam Brashear, aka the Blue Marvel, receiving a silent visitation from Uatu the Watcher. Adam talks to the Watcher briefly about his life (including the fact that he's living there since his kids moved out of the family home) and how he's uncomfortable with how Tony Stark and S.H.I.E.L.D do things. He recognises Uatu's presence as evidence of a great threat and orders his computer to return to monitoring "any situations that require Blue Marvel involvement (what, you're telling me that it can't help you with your research and scan for danger too? You need to upgrade man, seriously.). The computer immediately reports a "level 7" threat which Adam has never seen before. He wonders aloud what it must look like.

Right on cue we then jump to New York, where the "Superior Spider-Man", Luke Cage, Spectrum (Monica Rambeau) & the Splendiferous Spider Hero (no hyphen) are all kicking some serious alien butt. Otto tries to contact his Spider Lings to get them to converge on his present location, only to be told by one that they're pinned down. He's then ordered to get his head in the game by Spectrum and disarms several of the soldiers with "his" webs, only for Spider-Hero to take them out (you snooze, you lose Otto). 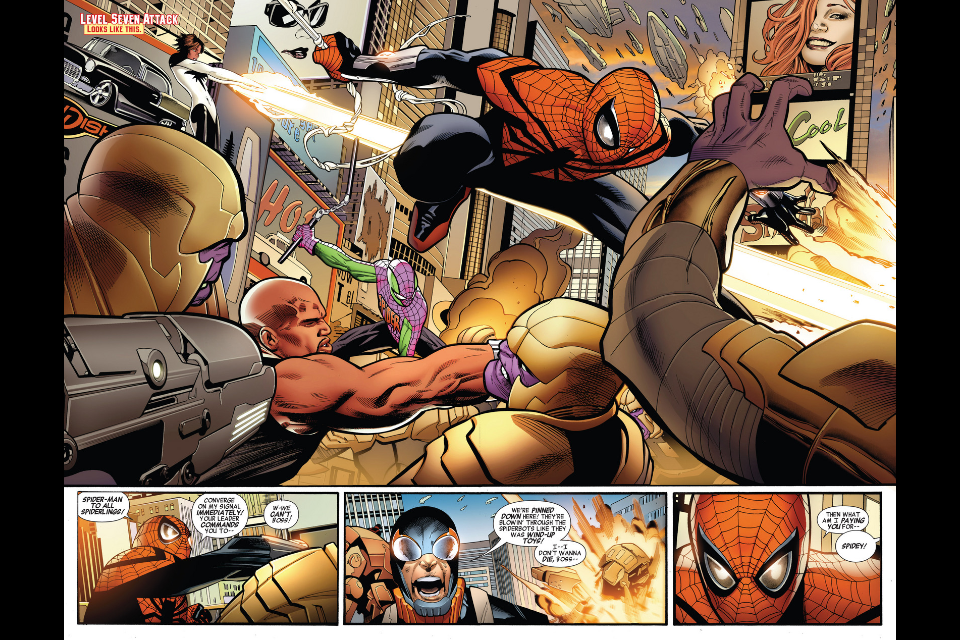 Proxima Midnight decides to eliminate Spectrum first as she seems to be leading the team and hurls her spear at her, which transforms into three tracers of "black light" that impales Monica. Cage attempts to help but is attacked by Proxima, who then beats the snot out of him. She then asks who is next, only to have a brick hit her in the face. The culprit turns out to be an old woman, who yells "No Pasaran" (which is Spanish for "they shall not pass", which is used to express determination to defend a position against an enemy). The other civilians present join in the chant and throw more things at Midnight and her troops, which does nothing of course. She dares the old woman to "sing out her little words again", only to be met with the cry of "AVENGERS ASSEMBLE", which spurs Cage to get up and renew his attack. 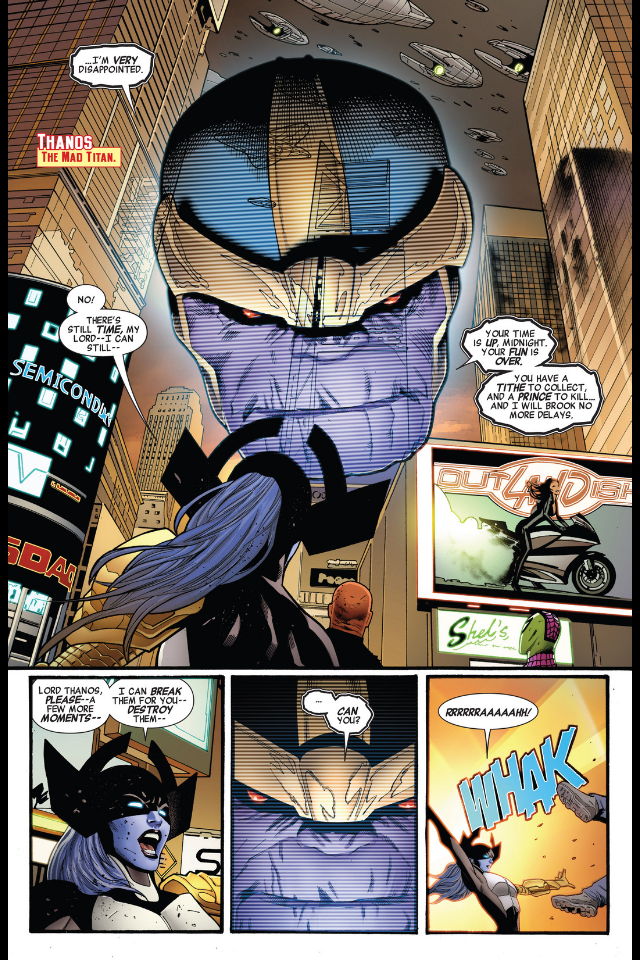 As this is going on, both Spider-Men note the increasing seismic activity, which Spider Hero correctly deduces as something being summoned. Midnight and Cage's beatdown is interrupted by a giant holographic projection of Thanos' head (typical grandiose villain). He scolds Proxima Midnight for not delivering a dead city as she promised and orders her back as she has a prince (with little wings on his ankles) to kill. Proxima concedes and calls her spear back out of Spectrum, taunting that she will die whether she is living light or nor before leaving, with Cage promising her that this is not over.

As Cage sends "Spidey" to help Monica, an evil voice sounds, revealing exactly what the Maw had Dr. Strange summon.
"BEFORE ALL WAS, I WAS. BEFORE TIME WAS, I WAITED. I FED ON THE SCREAMING SOULS OF UNIVERSES. I DRANK THE SPOILED MILK OF DEAD STARS. I AM THE EMPTINESS OUTSIDE ALL UNDERSTANDING. I AM SHUMA-GORATH, AND THIS WORLD IS MINE (no need to shout).

While our heroes look on in horror, the Blue Marvel descends from his personal jet clad fully in costume, remarking "Well, now. I guess that qualifies as a level Eight"... 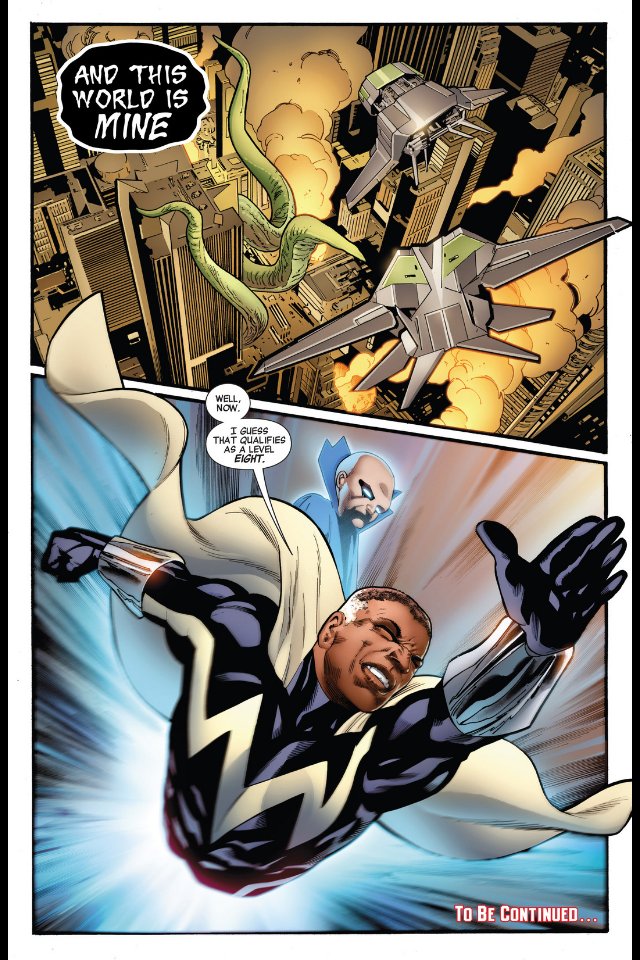 After a strong opening issue that validated this series very existence, Mighty Avengers continues to impress, even if this issue falters a little with it's storytelling.
The reintroduction of the Blue Marvel is a rather mixed scene. While it does break the flow and pacing of the story slightly, he proves to be an engaging character, and the way he addresses the appearance of the Watcher is very dry in it's humour. The interplay between the group is also quite fun, especially between SpOck and the Splendiferous Spider-Hero, who I'm starting to like more and more thanks to his brilliant comeback line to "Spidey". And while it was a little cheesy, the scene with the old woman worked very well in solidifying this team as "the peoples Avengers", plus the line "no pasaran" was actually pretty cool as a rallying cry.

Proxima Midnight proved to be an effective villain and henchwoman with her bloodthirsty attitude and I liked how Al Ewing pretty much called attention to the fact that she was on borrowed time as an antagonist since she obviously has a part to play in Jonathan Hickman's Infinity, and once again, I enjoyed Thanos' appearance. But the appearance of Shuma-Gorath was a great cliffhanger since it helps to make this opening storyline come across as more than a tie-in to Infinity (as well as explaining why Dr Strange has been taking up some panel time in these first couple of issues), though I'd have preferred to have seen the issue end with that reveal rather than a shot of the Blue Marvel in costume.

Greg Land's artwork is still mixed. The fight scenes are gripping and colourful enough, but the recurrent facial expressions are starting to mess with the plot. I actually thought for a moment that the old woman was a superhero in disguise since she had the same blank, vacuous look from page to page. Despite these issues, Mighty Avengers is still going strong for the most part, and the next issue looks to be pretty gripping with this literal "larger-than-life" threat... 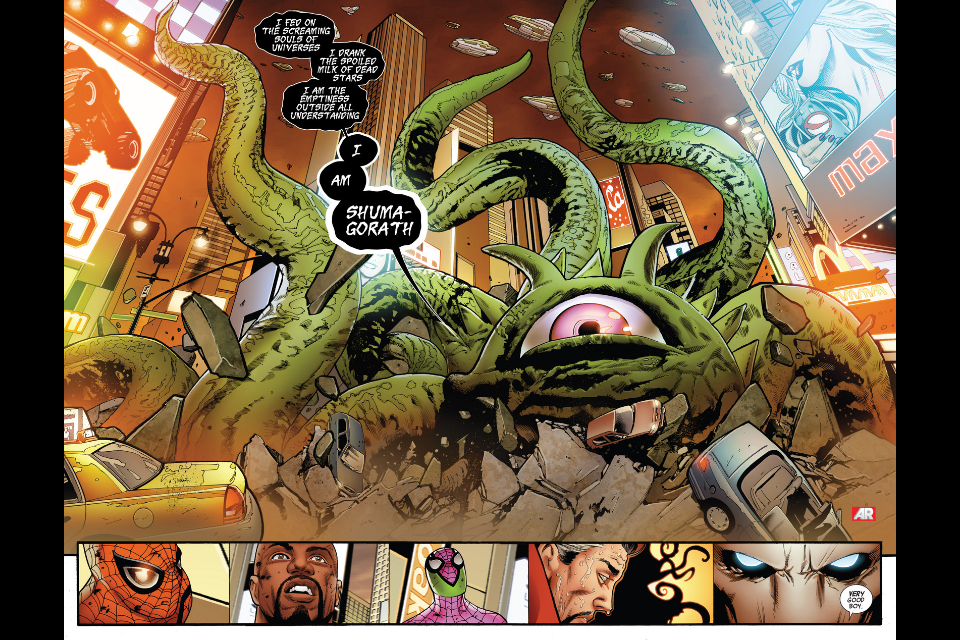