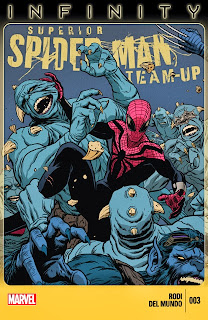 I will start of this review by pointing out that the cover of this issue has a monster's face being stuck to Spider-Man's hands, having his skin stretched a little. ( really weird)

This issue begins with earth being invaded by aliens. All the big guns have gone up to space to challenge the leaders of the Aliens, while Spider-Man, Luke Cage and others are busy defending the streets. (This is the extent of the team up in this issue) 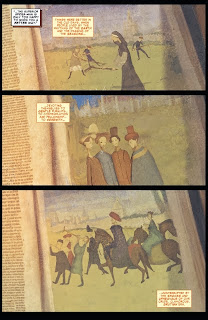 As far as story or plot line is concerned, there is not too much that interests me that takes place in this issue. While the main story involves Spider-Man being really clever in his tactics of fighting the aliens, there is a sub story about a young girl named Sylvia, a student actually, who is tired of the modern lifestyle.

She is found alone in the library, reading about the old and simple days, not disturbed by technology. Her
father, or Uncle, or someone informs her about the invasion and says she should leave to safety. Sylvia however is not concerned for some reason and continues her reading.

As she finally decides to leave the library, she is engulfed by some green mist. The next time we see her, she has become electricity! She is spotted by Spider-Man, who offers his assistance. He is intrigued by her and wishes to study her. 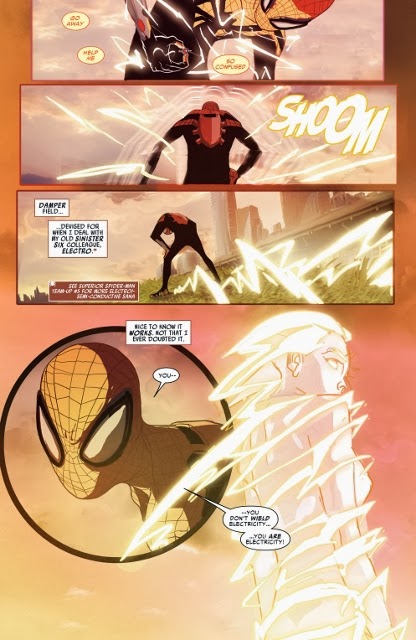 Spider-Man tries to recruit her to help fight the aliens. He tells her to travel quickly through the cable lines. All seems to be going well, when Sylvia, whom with the help of Spider-Man has changed her name to Fulmina, realizes she can destroy all technology. We end the story with her blowing up everything electrical in the area. 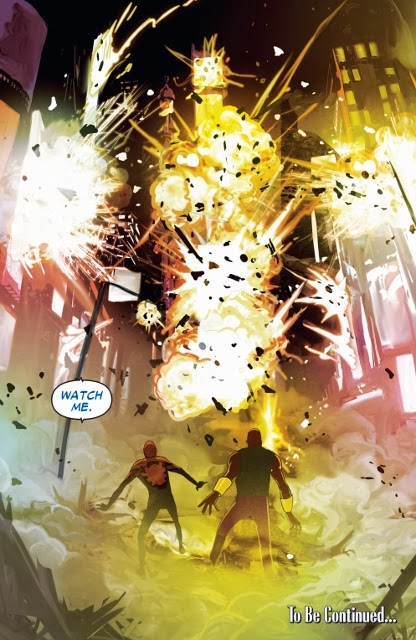 Like I mentioned at the start, this story truly lacked depth. No doubt this is a first instalment of a story to be continued, nonetheless, you can tell from the start that this story is something that can be missed. Nonetheless, this is still the first part of the story, and part two might save the story.

The biggest question about this issue is, what was that mysterious green mist, and what has happened to Sylvia's physical body. There is a lot we do not know about this Fulmina. From the one panel of her attack on Spider-Man, we know that she is not alone in there. It seems as if there is a second persona inside her. 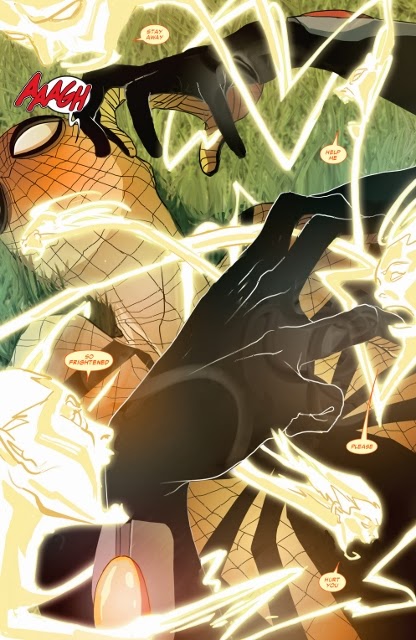 The first thing I wonder about, as a reader, is if this electrical power has anything to do with the aliens, or is it just a completely unrelated side story? Chances are however, that this girl would end up being a great help to everyone and fight the aliens at the end of the day. Any thoughts, opinions or knowledge about this new character I'm missing out on?