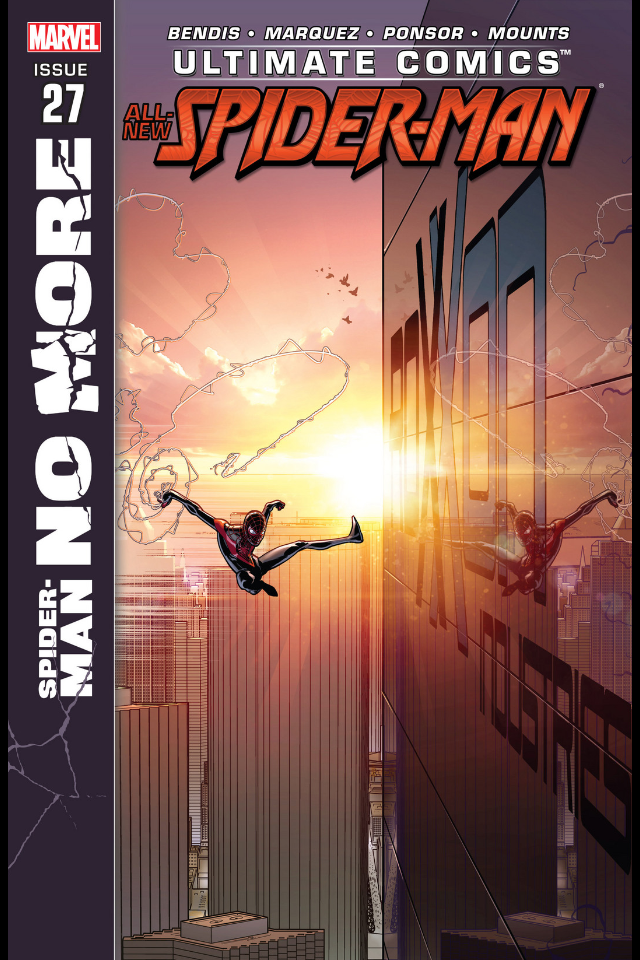 Hello everybody and welome to my review of Ultimate Comics: Spider-Man #27.

Cloak & Dagger observe the Roxxon tower, debating whether or not to kidnap Mr Roxxon and turn him over to the authorities. All of a sudden, an explosion occurs on a rooftop not far from them. The duo decide that they'd better investigate.

We then flash back nine minutes ago to that very rooftop, where Taskmaster is standing victorious over Spider-Man, Spider-Woman & Bombshell, all paralysed by stolen Hydra tech. He tries to unmask Spidey, but he doesn't count on Miles' venom blast, which knocks him back. As Miles gets to his feet, the paralysis wearing off now, Tasky grabs and throws him off the roof. Luckily, Miles is able to web-swing back up and retaliate, stopping Taskmaster from shooting Spider-Woman, who along with Bombshell, is also free from the effects of the Hydra weapon. 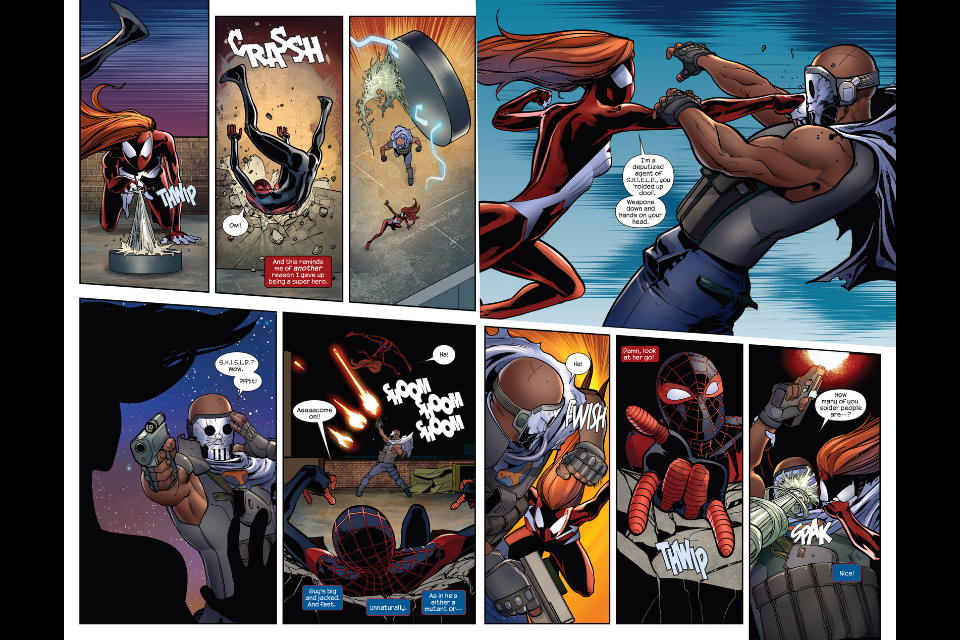 As Bombshell makes a break for it, Spider-Woman gets rid of the Hydra weapon after dodging a flying Miles. She then socks Tasky right in the face, declaring her status as a deputised agent of S.H.I.E.L.D, though he only seems to scoff at that. Miles then pulls the classic Spider-Man move of webbing your opponents face, leaving Jessica the opportunity to beat the living crap out of the mercenary.

Despite this, the guy still won't go down and continues to fight, even taking a full venom blast from Miles right to the neck and barely flinching. It seems that that last move was more costly than expected, as it turns out Ultimate Taskmaster can absorb other peoples powers, like Miles' venom blast, which he promptly uses on Spider-Woman before hurling her off the roof. 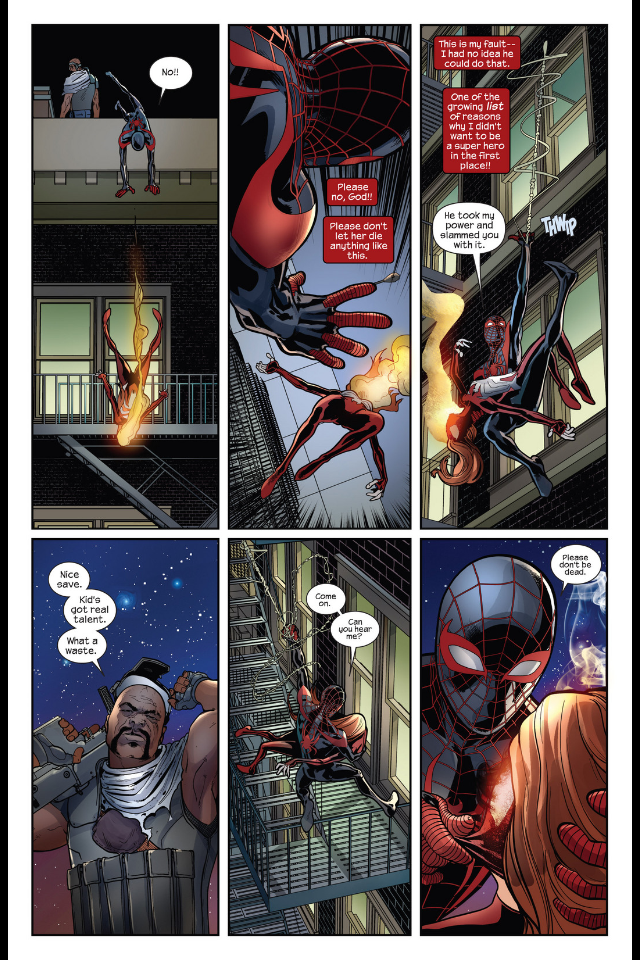 Miles dives after and saves her, quickly discovering that she's pissed off rather than being dead (in his own words) "pissed is good". Taskmaster tries to take a cheap shot at the two while their occupied, but he's prevented from doing so by Bombshell, whose had a change of heart and causes the same explosion witnessed by Cloak & Dagger. Of course it does jack to Mr Masters, who prepares to throw it back at Bombshell, but he's interrupted (yet again) by Miles and Jessica webbing him up.

The trio are soon joined by Cloak & Dagger, with Cloak swiftly defeating Tasky by enveloping him in his...cloak, releasing him once he's unconscious. Spider Woman pilfers his phone, revealing his identity to the group and that he was hired by Roxxon. This convinces Jessica that Roxxon needs shutting down, regardless of their business with S.H.I.E.L.D. As the police show up, this unlikely band of teen superheroes head for Roxxon Tower, with Spider-Woman declaring that everyone should be watching what comes next (I couldn't agree more)... 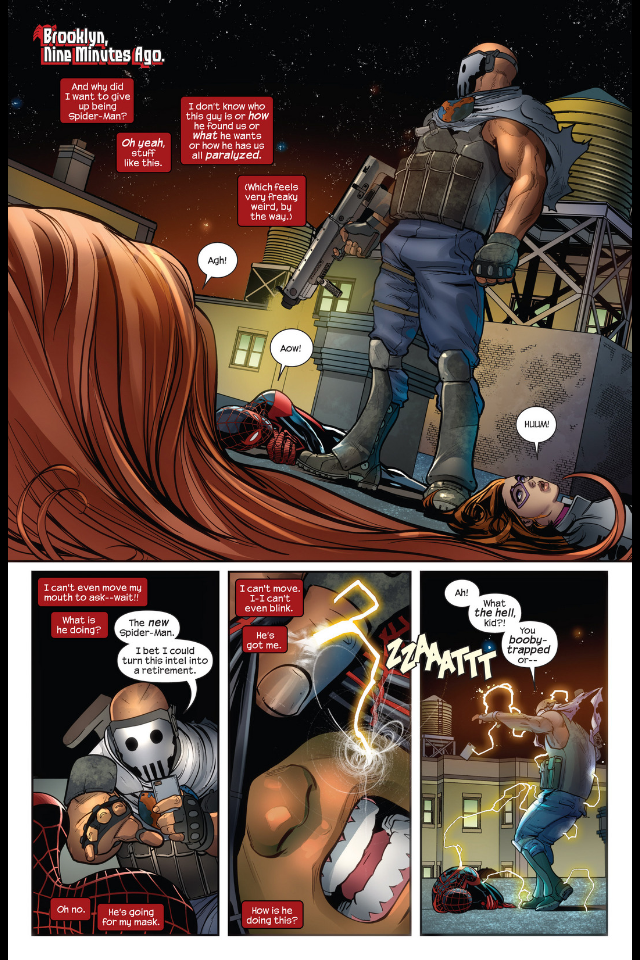 With all the deep introspection, origins and exposition that has been going on these last few issues, the story arc has been a little light on action, something that this issue addresses by essentially being one long fight scene, and it's an absolute blast!

It was exciting to see the debut of Ultimate Taskmaster last issue and he's even more awesome here. Bendis gives us a slightly different take on his abilities that still manages to stay true to the character whilst making him a real threat to Spidey and co. It's good to see Miles and Jessica fight together and develop their unique relationship through the experience. Bombshell's turnaround to hero near the end didn't feel that forced either as her stance as a reluctant villain was seeded well in earlier issues.

The final panel seems to indicate that by the end of this arc, these characters will band together to form a team, sort of like an amalgam of the Young Avengers and the Bendis era New Avengers. This could be an indication that the Ultimate Universe might not be destroyed in the upcoming Cataclysm event as some have previously speculated, but this is in of itself is speculation. The only thing we can do on that front is wait, but I would honestly be interested in seeing the dynamic between this team play out in future issues.

I've said it before and I'll say it again. David Marquez' artwork is pure awesomeness. The fight looks terrific and the characters are as expressive and vibrant as ever. The design of the Roxxon tower is also a nice nod to the Oscorp building from The Amazing Spider-Man film series, which seems to confirm that Roxxon are playing a similar role as Oscorp in the movies. Overall, I liked this issue a lot and aside from a few niggling nitpicks (It sure went from daytime to nighttime awfully fast between issues), this series hasn't put a major foot wrong yet, though they might as well rename it Spider-Man & His Ultimate Friends... 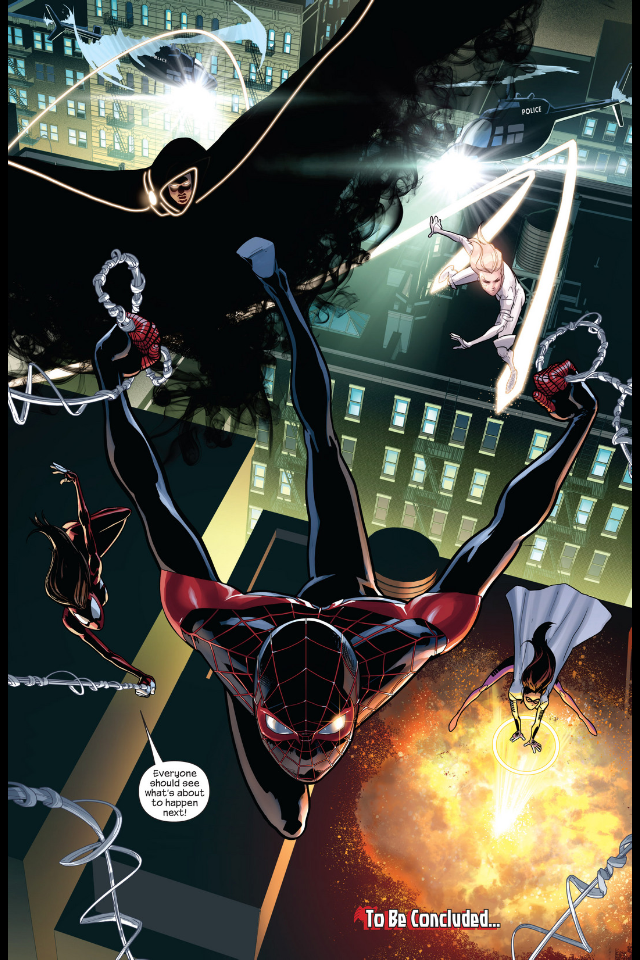