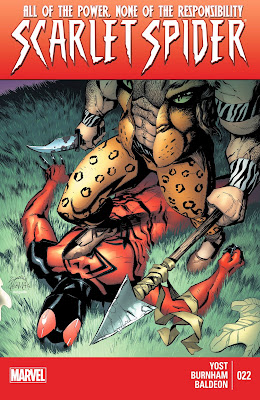 As some of you may no doubt know, Marvel announced via their solicitations for December of 2013 that Scarlet Spider #25 will be the last issue of the series (cue my imitation of Darth Vader's overlong, anguished, and dramatic cry of "NO!" Spidey fans).  Which also means, we only have a few more issues left for everything to be wrapped up in the life of our resident Spider-Man clone, including the return of Kraven the Hunter, although I know quite a few were really mad that it wasn't the return of Ben Reilly that Marvel led folks to believe.  So let's see what happens in Scarlet Spider #22 and part 2 of "Into the Grave." 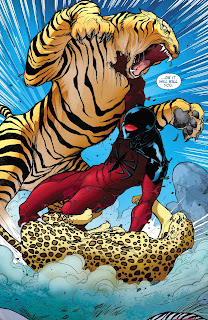 The issue opens with Kaine waking up at the Houston Zoo inside a freshly dug grave.  He also finds himself covered with blood, only it's not his.  As he crawls out, Kaine finds at he's in an enclosed pen with several half-eaten bodies of zebras.  Kraven the Hunter's voice comes over the zoo's loudspeakers, telling Kaine that he's studied him and tells them that, unlike Peter Parker and Ben Reilly, Kaine is not prey but a "predator," only that he has "pretended otherwise for so long that [he] has forgotten."  He then says that "the hunt" will remind him of this and either make him strong, or kill him.  And at this, Kaine gets attacked by a tiger and a leopard.

We then cut over to Aracely regaining consciousness, still groggy from being drugged by Ana last issue, sitting up against a tree.  Kraven politely introduces himself to her, and when Aracely asks how Kaine knows her name, Kaine explains he knows about her because of his studying Kaine, including that Kaine has saved her life in the past.  He then explains to Aracely that he is alive because of Kaine as well, as we get a recounting of Kraven's backstory, including his reasons for hunting Spider-Man, the events of "Kraven's Last Hunt," and finally "The Grim Hunt."  Kraven states that, because the blood of "Spider-Man" used to resurrect him was Kaine's instead of Peter's, he's been condemned to immortality.  However, when he learned that Kaine had also come back from the dead, Kraven believed he had found "something truly worthy to hunt" again.

By this point, Kaine has webbed up the tiger and the leopard, only to be attacked by Kraven's daughter, Ana.  After slicing him in the back, Ana takes off and Kaine gives chase.

Back with Kraven and Aracely, the latter tries to understand why Kraven is doing all this while also attempting to use her telepathic powers of suggestion to escape.  Kraven, however, is wise to what she is doing and slashes his knife across her face, drugging her once again.  Kraven states he is not after revenge but "something so much more important." 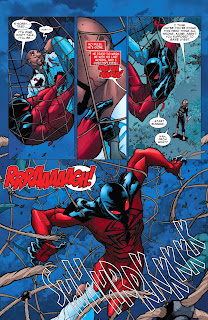 Kaine, meanwhile, is still in search of Ana when he finds a severely wounded security guard.  As Kaine attempts to give the guard medical attention, the guard tries to warn Kaine that it's a trap, only for the two of them to suddenly be pulled up by a hidden net.  The guard dies from his wounds, and Ana taunts Kaine about how, if he's supposed to be a hero, that he's supposed to be saving lives.  Enraged, Kaine breaks through the net and leaps down towards Ana.

We then see Kraven feeding a lion as he explains to Aracely about the simplicity of the animal kingdom--that animals are either predators or prey, strong or weak, and that while their nature can be masked, it cannot be changed.  He adds that even the domesticated animal has these survival instincts within them, and that Kaine is no different.  If properly pushed, the "hunger" for Kaine to kill will grow, and it's a killer, not a hero, that Kraven needs.

We then go back to the fight between Kaine and Ana.  Ana says she isn't the least bit threatened by Kaine, as she knows he's really a "broken man who wishes he was someone else."  However, Kaine manages to grab her and slam her to the ground.  He demands to know where Kraven is when Ana stabbed him in the shoulder...with Wally Layton's police badge.  Ana gets an opening to attack again, but Kaine is able to strike back and punch her repeatedly, demanding to know where Wally is.  Ana states Kaine already knows...that Wally, Doctor Donald Meland, and Annabelle Adams are dead and that Aracely is next.  At this Kaine, retracts his stinger and prepares to stab Ana right through the head.  As this happens, however, he realizes it's not the "monster" in his head telling him to do this, but himself.  And he recalls Ben Reilly, and how no matter how far Kaine had fallen, Ben always saw the good in him.  He then recalls the conversation he had with the priest from earlier in the series, wondering why, given all the horrible things he had done and still wanted to do, why he was saved and Ben was not. 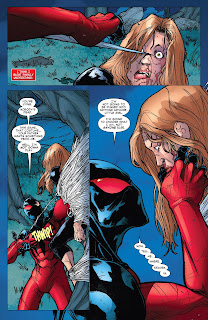 And as Kaine drives his stinger forward to kill Ana, he stops short, and thinks to himself that he might finally understand why he was given a second chance.  He then webs up Ana and tells her that she's lying about everyone being dead, and that whatever game she and her father want, he's not going to play their game, that from now on he'll decide for himself who he is, not anyone else.  And once again, he demands to know where Kraven is.

We then see Kaine with a tied-up Ana swing over to Kraven's location.  There, Kaine sees that Wally, Doctor Donald, Annabelle, and Aracely are all still alive and tied up to posts, surrounded by lions and tigers.  Kraven is waiting for Kaine as well, and when Kaine demands to know what Kraven wants, Kraven states that he thought it was obvious.  He states they are going to fight to the death, and that if Kaine refuses or if Kaine dies, then all of Kaine's friends will die "in the slowest and most painful manner [he] can devise."  In short, Kraven wants Kaine to kill him.

THOUGHTS
As regular readers of the Scarlet Spider are well-aware, one of the ever-persistent themes has been Kaine's struggle with own metaphorical (and thanks to his being possessed by the Other, quite literal) demons, lamenting constantly over how, as a clone and former assassin, he was more "monster" than man.  Well, given how this is a story about instinct vs. free will, and how there's only a few more issues left in the series, Kaine appears to have finally realized that, to borrow a quote from Sam Raimi's first Spider-Man movie "we are who we choose to be."  After all, the series has always been a story about Kaine's redemption. 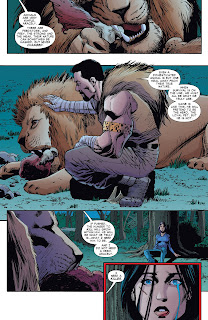 In that respect, having Kraven the Hunter as the antagonist for this story makes perfect sense.  With his Social Darwinism and "law of jungle" philosophy, he makes for a perfect opponent for Kaine, with Kraven himself acknowledging that they are kindred spirits.  However, this issue also reminded me why Kraven should've stayed dead---because even though he is a formidable adversary for both Spider-Man and Kaine, there has never been a whole lot of depth to him beyond his being a comic book take-off of "The Most Dangerous Game."  The moment he appeared last issue, you pretty much already figured out what Kraven's motives for going after Kaine and his friends were, thus Chris Yost and co-writer Erik Burnham trying to make some "shocking" twist that Kraven wanted Kaine to kill him in a fight to the death came as absolutely no surprise.

What is surprising--and disappointing--is Yost and Burnham's decision not to begin this issue directly after the ending of the last one, thus having Kaine lose his initial fight with Kraven off-panel.  You don't just set up a cliffhanger promising a brawl and then not show what happened during the brawl.  If the idea was that Kaine was supposed to succumb to the effects of the hallucinogenic drug Kraven injected him, then why not show him becoming unconscious during in the last issue?

Artistically, my impressions are the same as they were in the last review.  Once again, it's both decently and competently illustrated (I especially like the facial expressions on Ana Kravinoff during the scene in which Kaine is about to stab her) and yet, given the darker overtones of the story and the blatant allusions towards "Kraven's Last Hunt," the inking should be both stronger and harsher.  And, of course, this is yet another issue in which you have multiple artists on the title, which has been a problem ever since Ryan Stegman left the book, although it's not terribly distracting in this instance.

All in all, this was a serviceable issue, and with one more part to go to conclude this story, and two more issues to wrap up the series, lets hope all will be satisfactory.