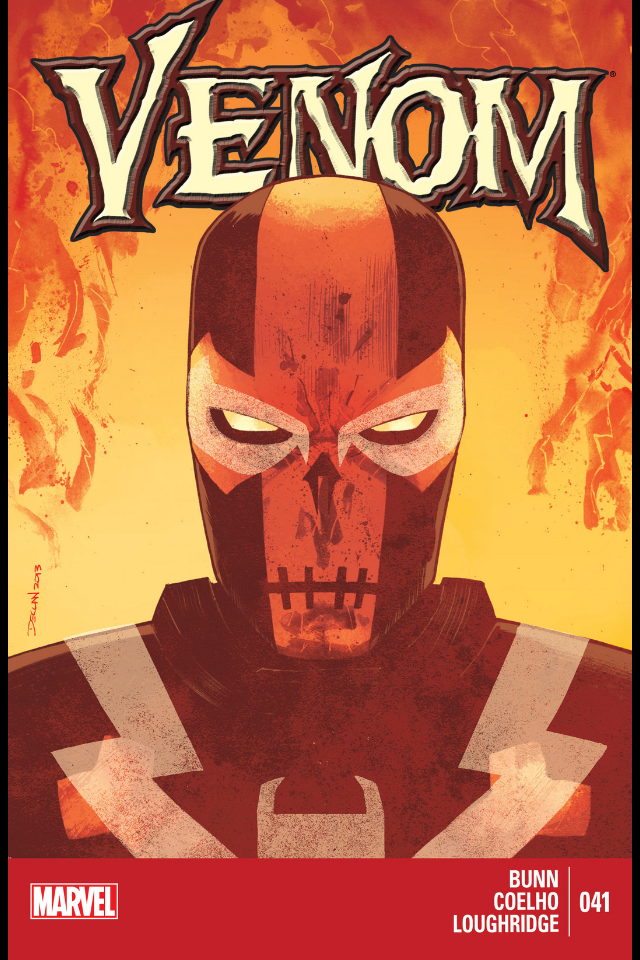 Hello everybody and welcome to my review of the penultimate issue of Venom (*sniff*), #41.

Daimon Hellstrom recounts to Agent Venom about how he first felt when he learned of the Descent, when one of those marked by Satan would become the devil himself, and one other would become a demon in their own right. Rather than choosing a single path, like opposing Hell or accepting his position, Hellstrom decided he wanted it all and more. He wound up creating several copies of himself, "shadows to explore the possibilities from every angle". He's not even sure if he's the original, especially since he's fallen so far recently.

Meanwhile, in Philadelphia, Mania is tearing her way through Lord Ogre's penthouse, finally reaching the crime boss, who unveils his trump card, a chemical bomb strapped to his chest that, if set off, will take out a good chuck of the population. Andi assumes he's bluffing and plans on killing him anyway, but in dives Venom to save the day (he's been doing that a lot recently?). 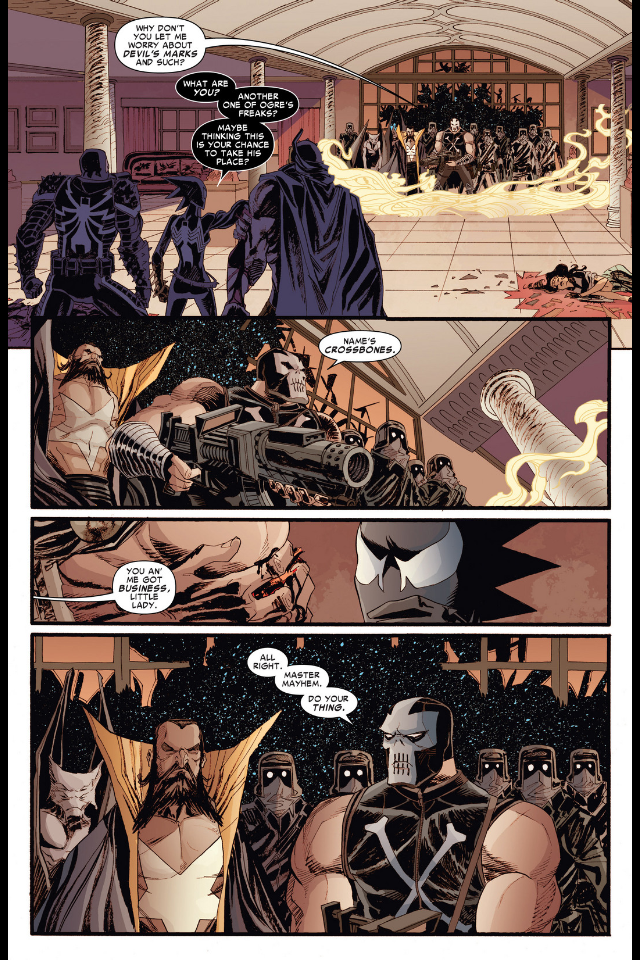 Flash starts scolding Andi for her behaviour, only to retract when she yells at him that he's not her dad. He tries to explain to her about the mark, only to be interrupted by the arrival of Crossbones, who orders his associate, Master Mayhem, to "do his thing". Mayhem unleashes a small army of demons from his chest at Venom & Mania, who hack and slash their way through them. Lord Ogre isn't so fortunate however and is partially eaten alive, with the bomb triggering as he dies.
Thinking fast, Venom grabs the bomb and hurls it into Master Mayhem's chest, where it explodes, causing him some mild discomfort. Andi then discovers that the mark gives her control over the demons when she yells at them to get off, turning them against their previous masters while she and Flash make a hasty exit.

Back at his apartment, Flash uses a crystal ball he found to attempt to communicate with the symbiote, ordering Andi to stop him with the contents of a syringe he gives her should anything go wrong. Inside his memories, Flash talks with the symbiote, which reveals to Flash that it sent the demon to Andi as "the intruder had to be purged", it also chides Flash for practically bullying it when it has done nothing but try to protect him, warning him to "expel the disease before it's too late". At that point, Flash comes out of his trance. When Andi asks him if he learned anything, Flash replies that he didn't really, but he knows what they have to do next. They have to make a deal with the devil... 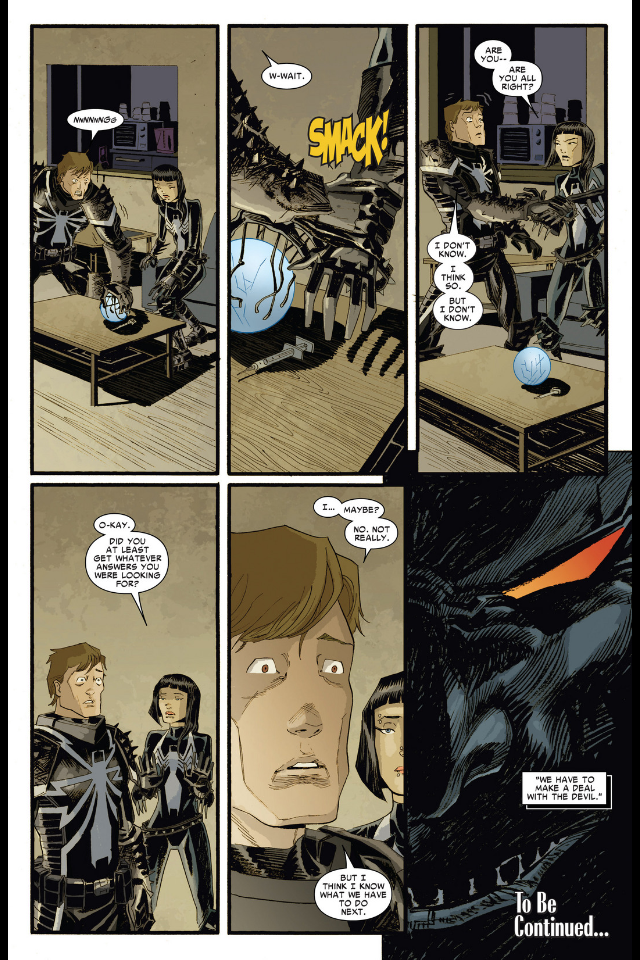 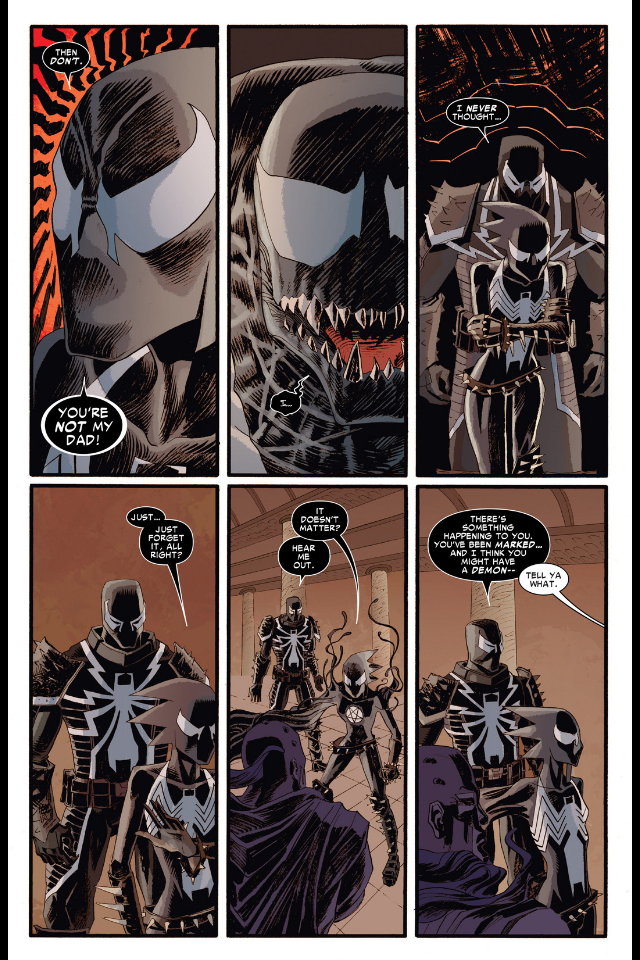 What's most impressive about this current storyline is that, despite the large amount of plot elements, Cullen Bunn is managing to keep it from becoming overwhelming and looks set to deliver a satisfying, if somewhat flawed, finale to the Venom series.
Flash & Andi's partnership provides a nice touch of comedy to the otherwise serious developments going on. I liked how Flash has subconsciously been trying to fill the void of a maternal figure for Andi. It's well seeded in the dialogue by Bunn and a good moment for Flash when he realises it. It's also another reason to be sad that the series is getting cancelled as it would be great to see these two in regular patrol's around Philly, but I'll take what I can get while it lasts. The conversation between Flash and the symbiote is awesome and it's cool to see the symbiote actually weighing in on the present situation.

The reveal about Hellstrom is quite interesting and certainly explains his change from hero to villain in this series, and hopefully Bunn might follow up this idea in his other titles such as Fearless Defenders. The death of Lord Ogre however, feels rather forced, though I can't really blame that on Bunn since he's trying to tie up certain threads of the series before it's end. Crossbones meanwhile gets the short straw of panel time due to there being so much going on and doesn't have much of a presence here. It's likely the final issue will fix that with both the prior characters now out of the picture.

While I was rather critical of Jorge Coelho's art last ish, this time I've a lot more positive things to say as he's stepped up his game. Like with Kim Jacinto & Greg Land, he's strongest when drawing characters that are masked or, in the case of Venom, have exaggerated features. There's more expression behind the characters faces this time, though Flash still looks heavily botoxed and flat-faced. This series has so much more mileage and potential, but sadly, we're stuck with just one issue left (*double sniff*)... 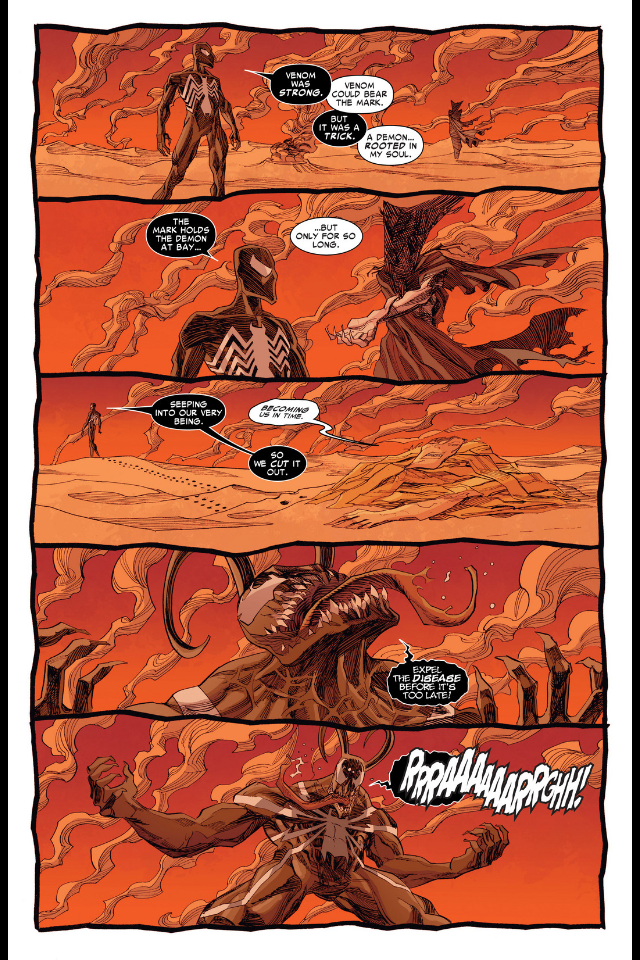