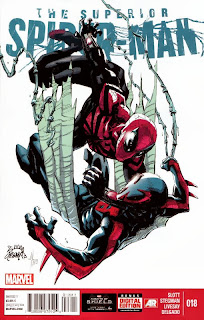 This issue begins exactly where Superior Spider-Man 17 left off. We see the two Spider-Men fighting one another. Spider-Man 2099 tries to get Spider-Ock to remember him. Obviously however that does not work as its not really Peter inside the costume, (or the body for that matter).

Meanwhile, over at Horizon, Grady prepares to go into the time portal, which can now go into the past, to catch Tiberius back stabbing Horizon and catch it on camera ( At least I think that is the plan).

Coming back to the Spider battle, Ock cuts Spidey 2099 with his claws, only to find that there is not a scratch on the future Spider-Man. Spider-Man 2099 then explains that his suit is made from UMF material, unlike Ock's low tech gear. At this 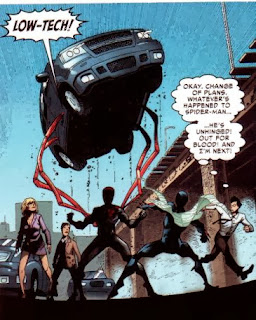 Ock loses it and is about to throw a car on Spider-Man 2099, when Stone takes out a mini Spider Sense Jammer, causing Ock to go nuts, nearly dropping the car on Normie.

Fortunately, Spidey 2099 manages to pull the kid to safety in time. Spider-Ock gets up in regret of his actions that endangered the child and leaves to find Tiberius Stone, who has fled the scene with the help of Spider-Man 2099.

Fearing about what the future Spider-Man may know, Spider-Ock sends all his men to be on the lookout for any sightings of Spider-Man 2099. His next fear is the acquisition of Horizon Labs by Allan Chemical. As Spider-Man, Ock rushes to his lab to quickly move his inventions to prevent them from becoming property of Allan Chemical in the event of a takeover.

Elsewhere, Spider-Man 2099 is trying to figure out if he should let something bad happen to Tiberius Stone to prevent his future from ever coming to pass, even if it means erasing himself from history. Stone by now has figured out what is going on and realizes that he cannot be killed, or will not be allowed to, so long as this Spider-Man is here.

Spider-Man 2099 gets in touch with his girlfriend, who apparently is an encyclopedia and knows everything and tells him about the connection between Alchemax, Horizon Labs, and Tiberius Stone. We find out that Tiberius Stone had caused an explosion in Horizon Labs that led to the rise of Alchemax. 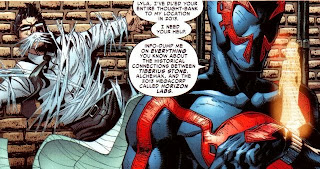 Peter Octopus eventually reaches Horizon and clears his things. Max begs him to stop and tells him not to come back if he leaves. Peter obviously just leaves. When Max gets back into the lab and realizes what Grady has been doing, he demands that he stop. Grady comes out of the machine, and turns off the machine, but the Chronotons ( things that result from the time machine) are still there. Grady explains to Max that its actually Alpha energy from long before and that he had nothing to do with it. Spider-Man 2099 comes just in time to prove this. Before he can explain his plan to prevent the Lab from exploding however, Spider-Ock comes in and knocks Spidey 2099 flat out.

This seemed like a really long review, even though I skipped a number of panels, which I will get to later.
This issue seems to me like a game changer for Spider-Man comics. The end result of this story could either be the end of Horizon Labs, or the end of Spider-Man 2099 ( from the looks of it)

It's great how Horizon Labs plays a vital role in the future world and the rise of a new evil empire run by the Stone family.

If there is anything that comes across to me from this issue it's that Spider-Ock is feeling really weak, insecure, and terrified by the events taking place. 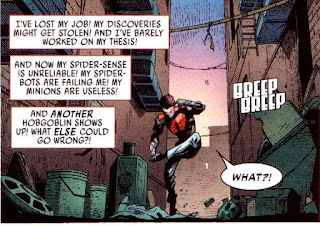 The other interesting minor scene of importance here involves the sighting of a new Hobgoblin, whom is believed to be the original Hobgoblin. Secretly however, only us readers know that it is actually the ' Orginal Goblin' behind the mask.

I'm not at all sure who this original Goblin is. Seeing that everyone seems to be wearing the Green Goblin mask these days, this character could either be the Green Goblin, or the Goblin King, depending on the current identities and whereabouts of both.

Also, finally, I'd like to add that its funny how all Spider-Men carry guys in the same fashion! Cheers 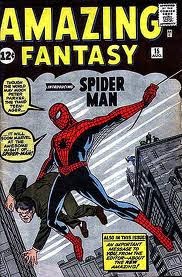 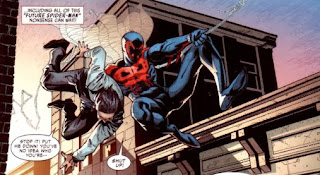