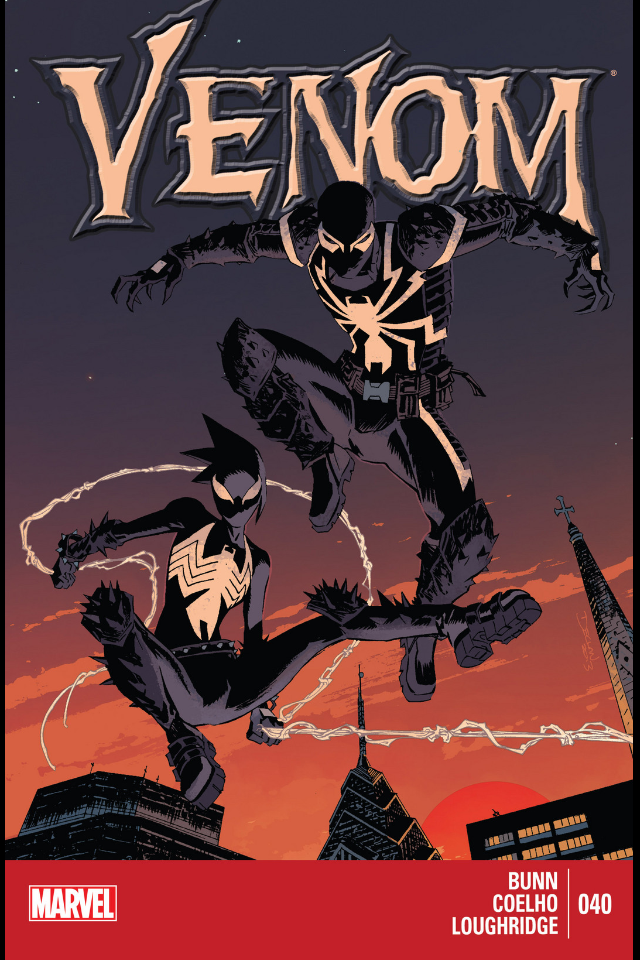 Hello everybody and welcome to my review of Venom #40. 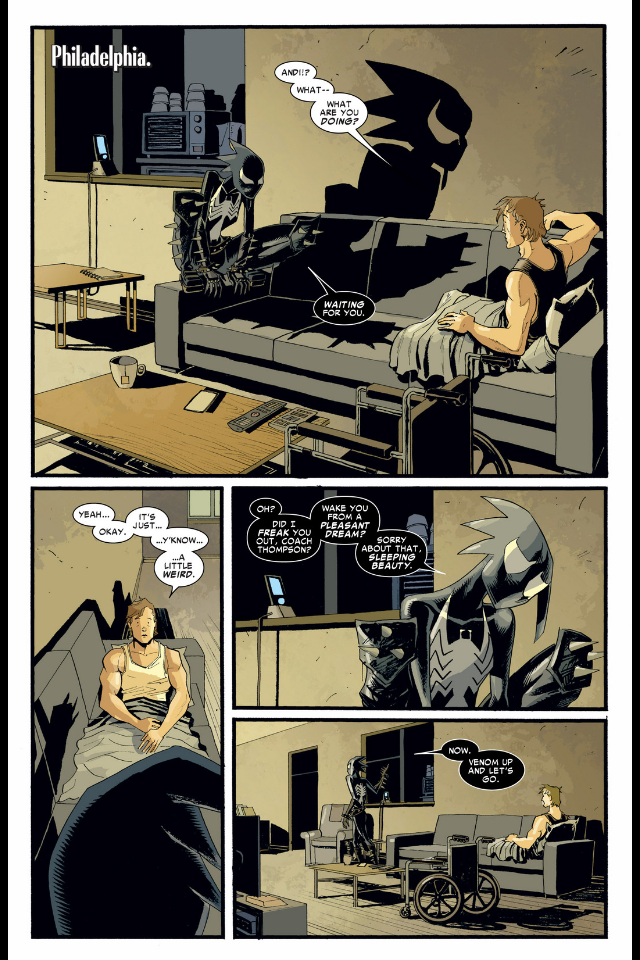 In a dark alleyway, a man is beaten to death by a street gang. Flash Thompson narrates during this scene about whether or not the man wanted to die. We then see flashes of a city in ruins and then a shot of what looks to be Venom ushering in Hell on Earth!
Of course, this turns out to be some strange, foreboding dream of Flash's, who at that moment wakes up to find Andi by his bedside. She urges him to "Venom-up" so they can chase down some leads and find Lord Ogre so she can get revenge for her fathers death. Flash tries to explain that she needs time to adjust to bonding to the symbiote, but Andi reacts with hostility and even suggests that maybe the symbiote understands her better than Flash does. Flash then gets a call from Katy Kiernan, who asks him to come to Austin, Texas, as apparently there's something there he needs to see.

Once he's arrived, Venom is shown a body by Kiernan in the city morgue (thanks to her use of feminine charms on the guard there). It appears to be that of Daimon Hellstrom, the Son of Satan, with the skin featuring the mark of Mephisto ripped clean off his chest (Ugh, gross!), and according to Katy, there are identical cases popping up all over the country.

Back in Philly, Andi is busy tearing up one of Lord Ogre's clubs with the newly adopted moniker of Mania! Ogre sics more of his goons on her, but she cuts through them with nothing more than a scratch. Lord Ogre tells her that he's not scared of a "child in a monster mask", whilst at the same time beating a hasty retreat (Uh-huh)

His suspicions aroused, Venom pays a visit to Hellstrom at The Peak Maximum Security Prison in Virginia. He tells him of his discovery and suggests that someone is out to eliminate the competition before the "descent". Hellstrom explains that anyone who bears the mark will become a hell lord. He also surprises Venom by informing him that he's no longer marked by Mephisto, revealing that when he transferred part of the symbiote to Andi, the demon went with it.

Meanwhile, Andi is swinging through Philly on patrol, totally unaware that she's being hunted by Crossbones, who is collecting hell marks and plans to skin her just like he did the Hellstrom copy... 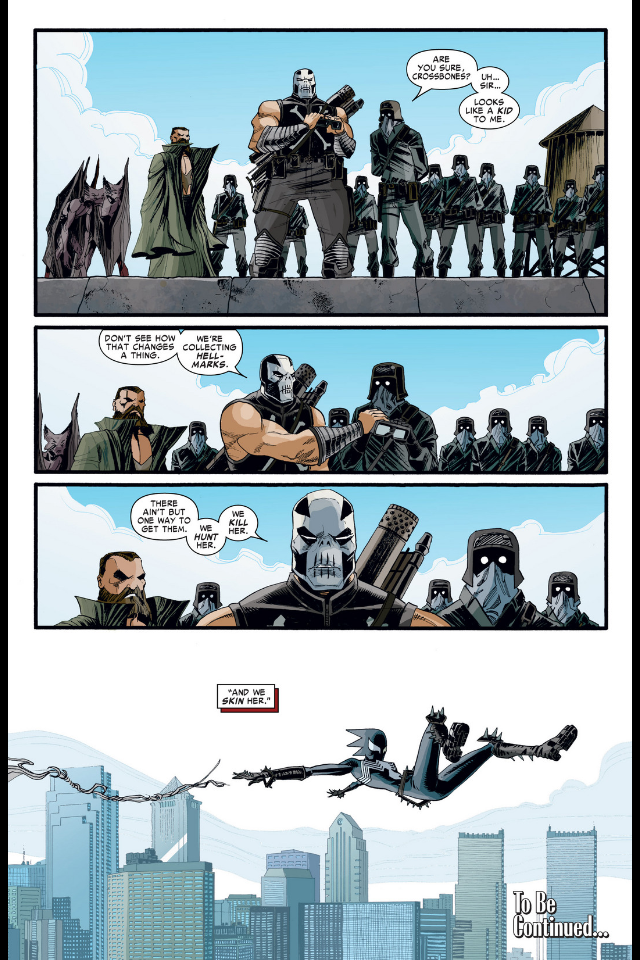 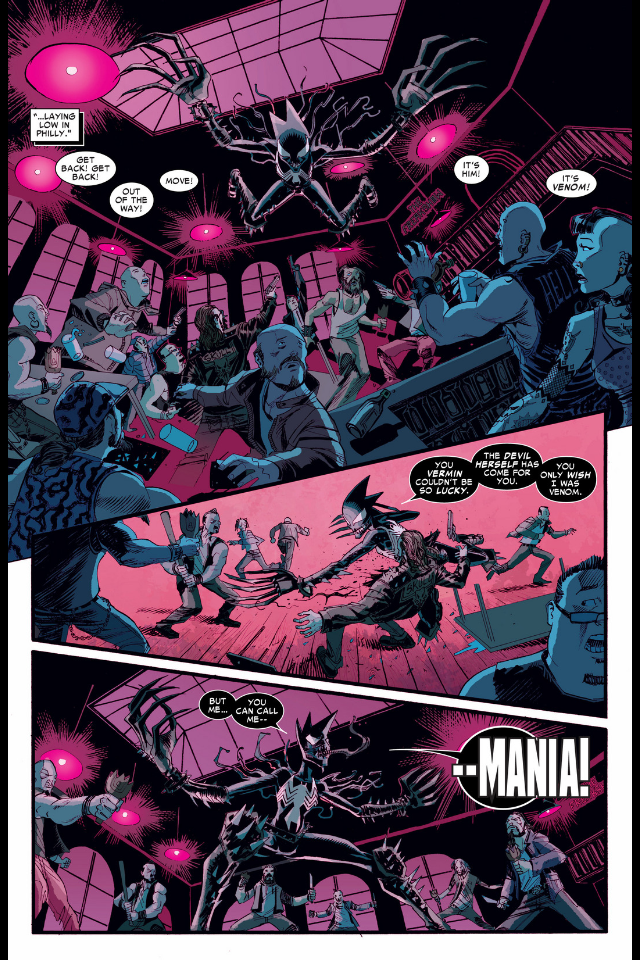 Overall, we're off to a good start with what looks to be the final story-arc in the Venom series. It's good to see Cullen Bunn starting to tie up several lingering plot threads such as Daimon Hellstrom and Lord Ogre, whilst simultaneously introducing a new threat in the form of Crossbones.
The reveal of how the symbiote bonded to Andi so fast is certainly surprising and I don't know why I didn't see it coming. Andi herself feels very natural in her attitude towards Flash and the symbiote, and it's cool to hear the symbiote (or demon) speak through it's host once again, as that's something I've been kind of missing from the series. Once again the budding relationship between Katy Kiernan & Flash Thompson is very enjoyable to watch as the two bounce off each other really well.

I don't like to complain about artwork, but Jorge Coelho's work wasn't exactly great here. The biggest problem is with the characters. Flash has all the emotional resonance of a stone statue, Andi's neck seems to extend and retract between panels, and Daimon Hellstrom just looks scary, though the characters in costume look good and there are some other moments that offer redemption, like the nightmare splash page at the start. From a story perspective, this is looking very promising. Art-wise...well, we'll see.. 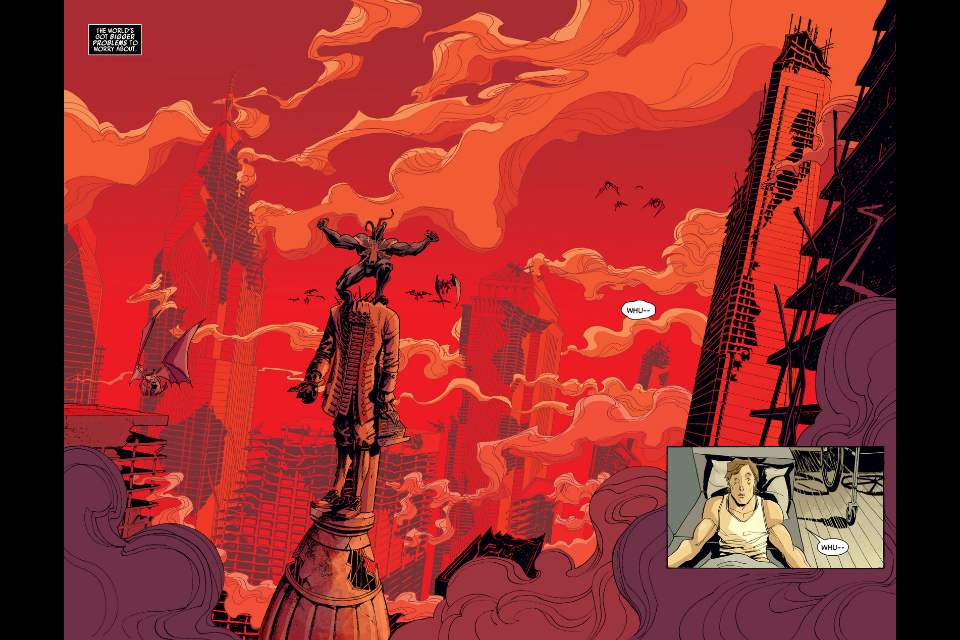