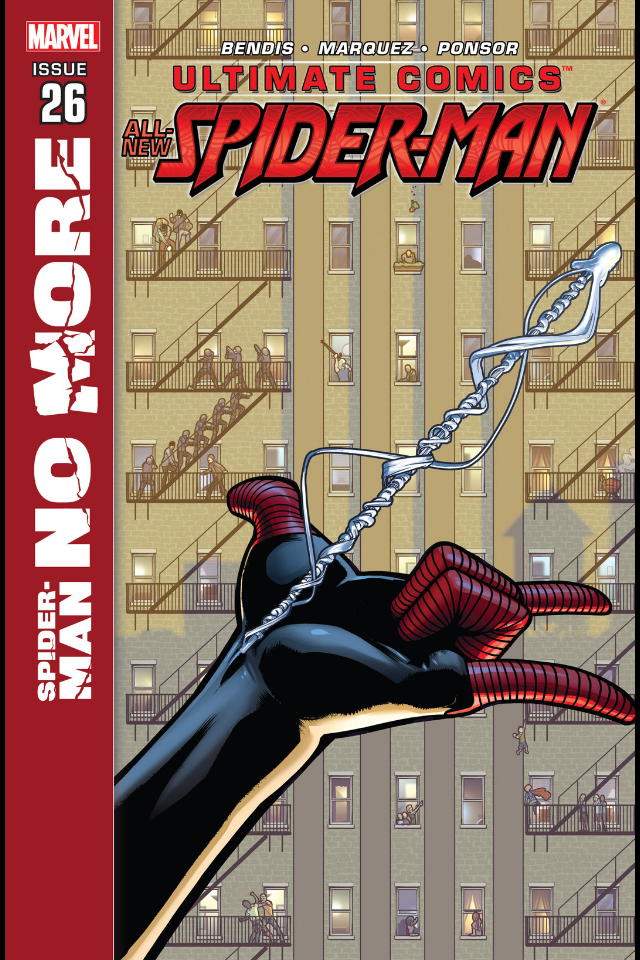 Hello everybody and welcome to my review of Ultimate Comics: Spider-Man #26, as the "web" of intrigue thickens exponentially.

The story flashes 15 years back to Ryker's Island, where prisoner Lana Baumgartner is being offered an early parole from her 18 year sentence as she has been pre-screened as a candidate for a "super-genetics program". Lana asks that they cut the BS "fancy talk" and tell her just what she has to do to get out of Ryker's.

In the present day, Bombshell (Lana's daughter Lori) is on the phone to her boyfriend (Wait, how did she escape from Cloak's...costume?), begging for him to let her come over, but he tells her no. As she hangs up she is startled by the sight of Spider-Man & Spider-Woman, who were unintentionally eavesdropping. Panicking, Bombshell uses her powers and attempts to escape. Miles gives chase and manages to catch her with a web-line after missing with his first one. They both convince Lori that they're here to help her despite Spider-Woman working for S.H.I.E.L.D.

In some more flashbacks, it turns out that Roxxon paroled Lana from Ryker's to perform experiments on her, successfully giving her the power to create explosions. Lana blew up part of the complex and escaped however, when she discovered that she was pregnant thanks to one of the scientists reporting it to his superiors during a test. 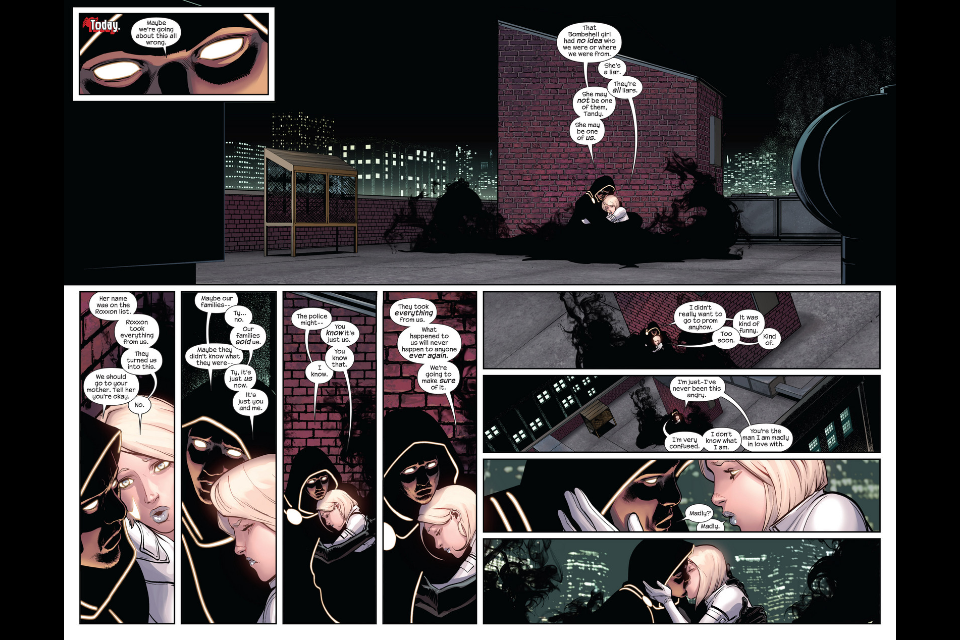 Back in the present, Cloak & Dagger are on a rooftop contemplating their new existence. Cloak is wondering if their going about things the right way? He suggests that they should return to their families, but Tandy objects, saying their families "sold" them and that they have to ensure that Roxxon never does this to anyone ever again. She also affirms her love for Cloak and the two kiss.
Elsewhere, at Roxxon's secret labs, Mr Roxxon is fuming over the escape of Cloak & Dagger. Despite Dr. Layla Miller's prattling that this is the single greatest discovery of what the "human machine" is capable of. He refuses to allow Miller and her team to hunt down the runaways, instead urging them to help his "guest" in any shape or form, as he will be the one who'll bring all the experiments home. The guest turns out to be Anthony Masters, aka Taskmaster (OMG!).

Meanwhile, Spider-Woman questions Bombshell on the nature of her powers, and she and Spider-Man have a little bit of back and forth on Miles' age. Suddenly, his Spider-Sense flares up and a black cylindrical object lands on roof, incapacitating the three with it's resulting electric shock. With his quarry down, Taskmaster appears, saying that this turned out to be a profitable day... 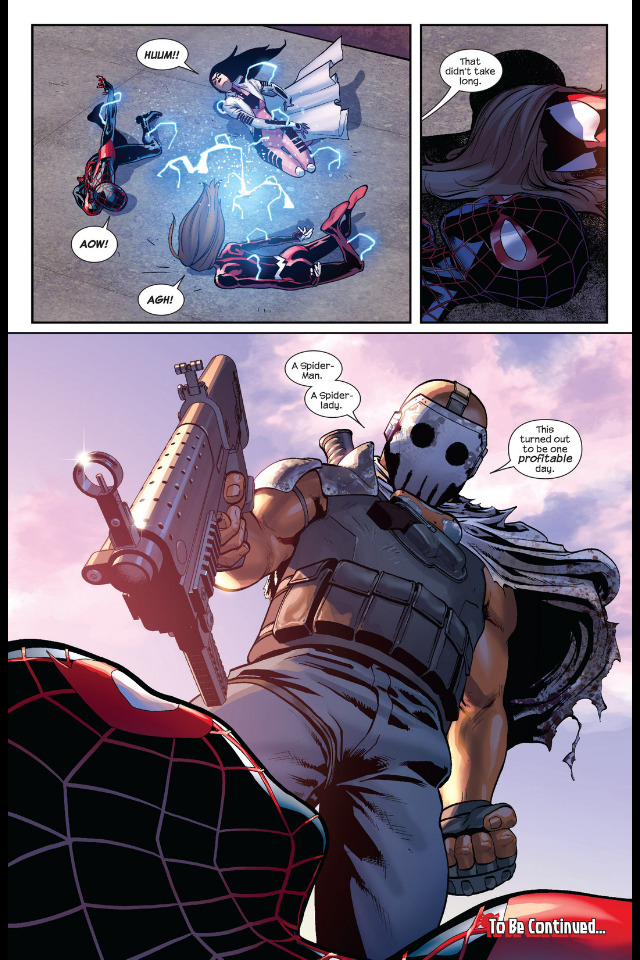 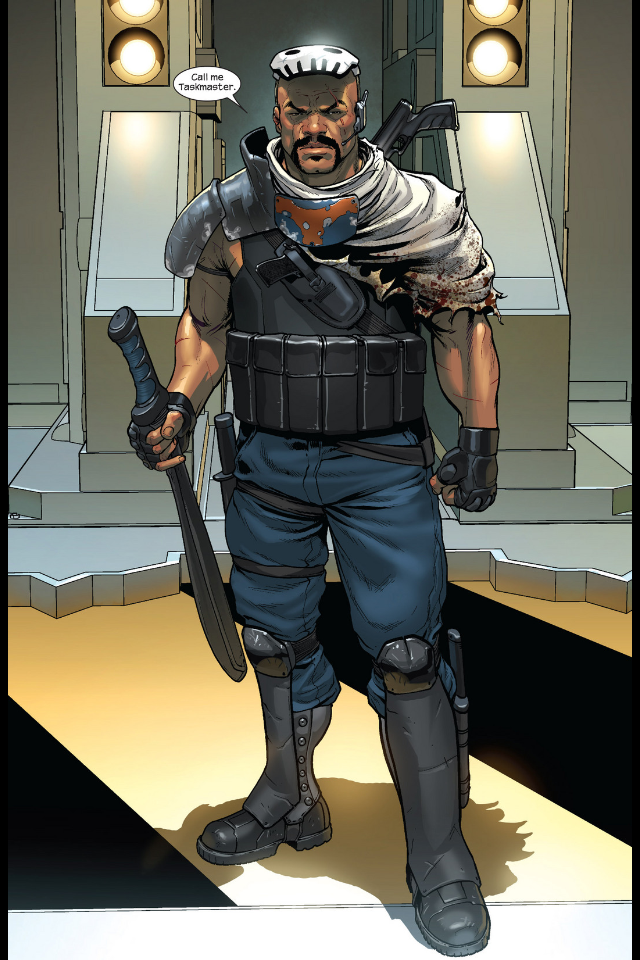 I don't always like to state the obvious, but man this is a good comic book! Bendis has such confidence in his storytelling that it's preferable to just sit back and watch the story unfold rather than spending time rampantly speculating over the next installment.
With all the focus on Cloak & Dagger in the previous issues, it's a welcome surprise that the character of Bombshell is fleshed out as well as contributing to the plot. Her origin is more streamlined that Ty & Tandy's, but it gives us enough information about her powers and her background so that it's easy to work out the rest. The spotlight is taken off Miles, Ty & Tandy in this issue, but it works anyway thanks to the depth these three were given in previous issues. The reveal of Taskmaster was just awesome, his Ultimate makeover looks fab and it'll be interesting to see whether or not he retains his mainstream counterpart's abilities. I like that Roxxon is linked to several of these characters, similar to how Oscorp is in the Amazing Spider-Man films

I am totally in love with David Marquez' artwork for this series, it's such a great fit for the Ultimate Universe (though I wouldn't be adverse to Marquez working on a mainstream Spider-Man title) and Justin Ponsor's bright and shiny colours blend perfectly to create some truly striking panels. This series is continuing to impress me and I'm looking forward to seeing where Bendis takes things in the next issue... 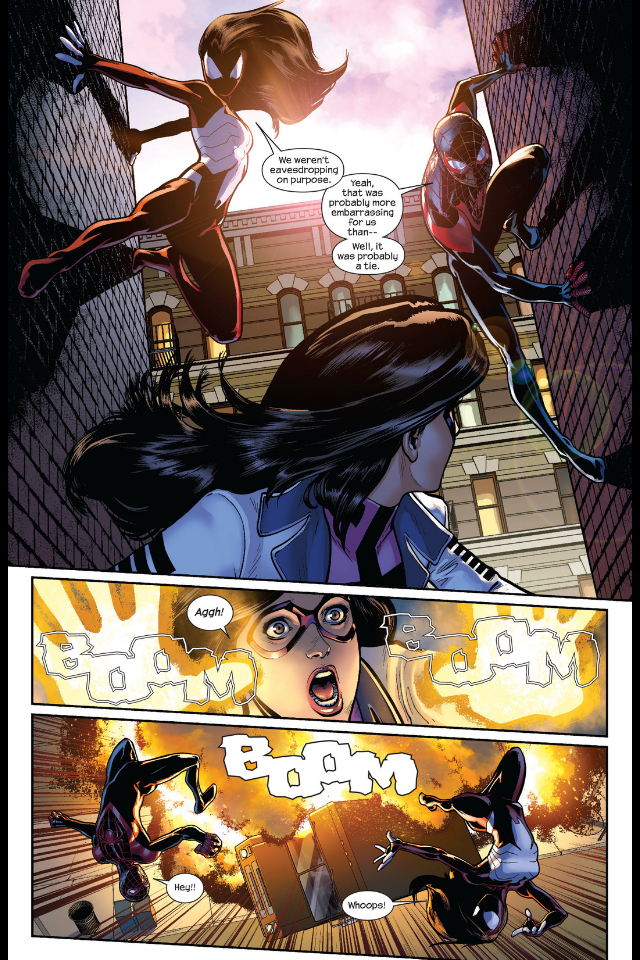