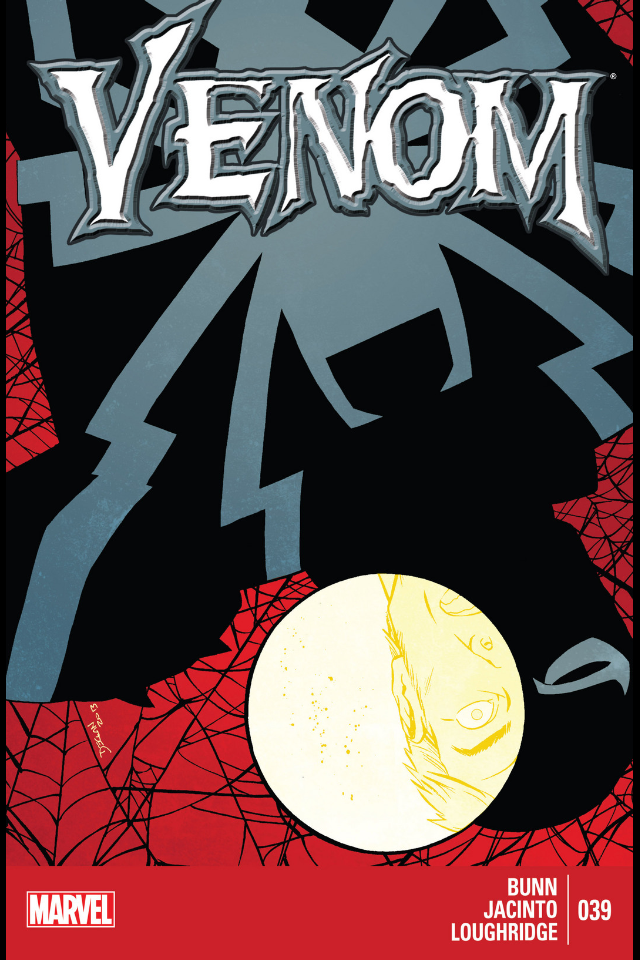 Hello everybody and welcome to my review of Venom #39. In case you didn't know, Marvel recently announced that the series will end with it's 42nd issue. While this is a little saddening, Cullen Bunn has apparently stated that he isn't done with the symbiotes yet. Perhaps we could be in for either a Venom Mania series (the pun is naturally tempting) or perhaps something will happen to Flash during his appearance in Superior Spider-Man in November (a month after the final Venom issue), like SpOck defeating and capturing him or just the symbiote at least, that would warrant the series coming to a close. Whatever happens, I certainly don't think we've seen the last of Venom. 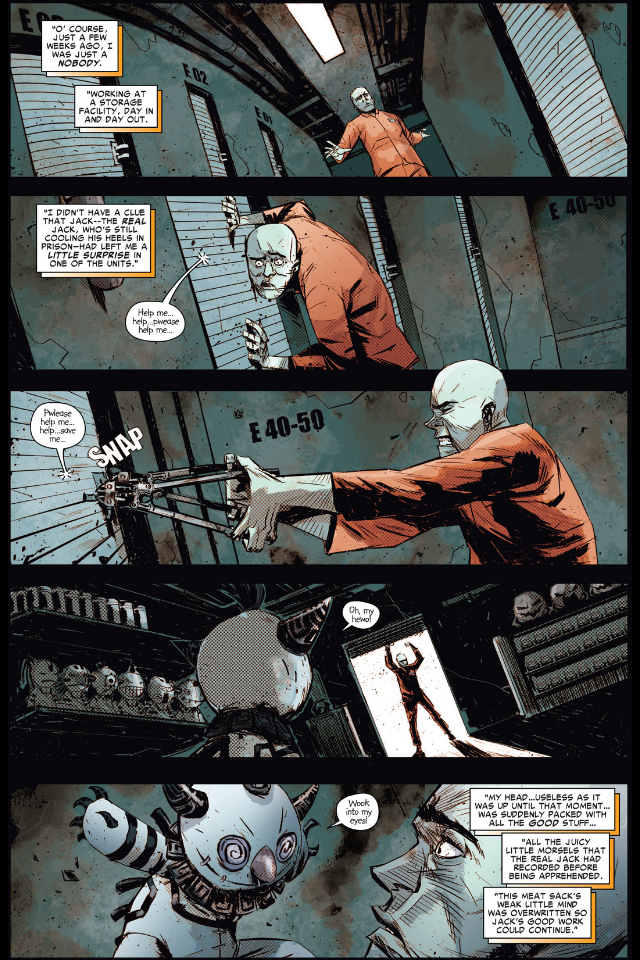 With a fraction of the Venom symbiote bonded to her, Andi Benton attacks Jack O'Lantern with a rage that would make Wolverine raise his eyebrows. Agent Venom joins in and pounds Lantern into the ground, his mind made up that Jack is a lost cause and that he needs to end him. But when Andi is about to kill Jack, Flash refuses to allow her to do so, seeing Lantern as his responsibility

It turns out however, that the man underneath the pumpkin isn't the real Jack O'Lantern, but instead a storage facility worker whose mind was overwritten by Jack's gadgets after he discovered them at his workplace. At this point, Venom decides against killing this "fake" Jack since he's merely a pawn. Andi argues with him over this which allows Back-Up Jack to escape. The two promptly give chase.

Midway through their pursuit, Flash decides he can't let Andi go with him. Obviously she disagrees. Flash tries to call the symbiote fragment back to him, but nothing happens. Warning him not to do...whatever it was that he was doing ever again, Andi takes off. As Venom follows, he starts to wonder how Andi has adapted so quickly to the symbiotes powers. 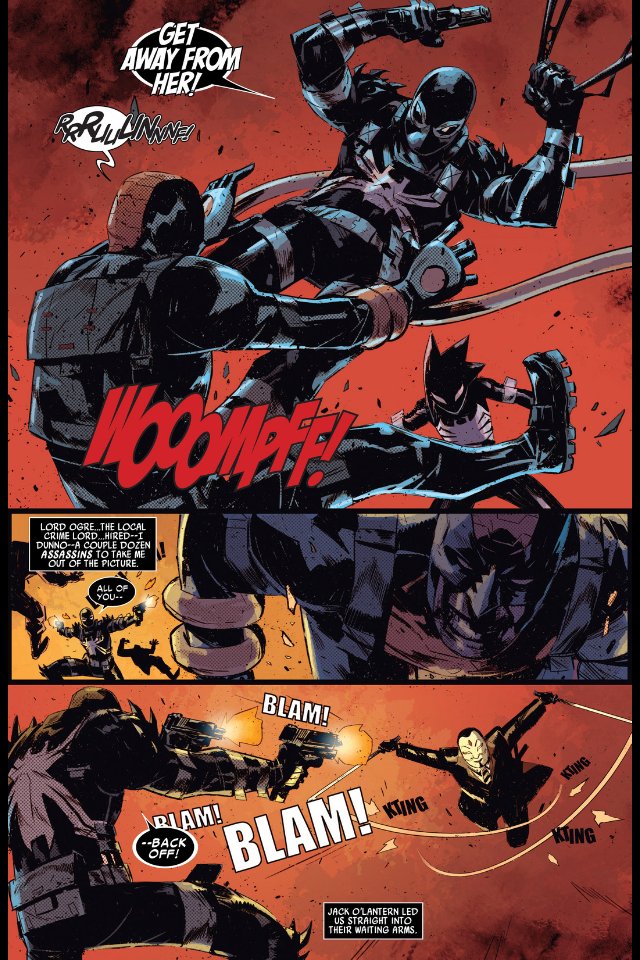 Suddenly, Andi is hit by Constrictor, whose backed up with several other assassins on the hunt for Venom. Jack orders them to kill her, but Constrictor refuses, saying he won't kill a kid. Unfortunately for him, no one told Venom that, who swiftly lands on Constrictors head yelling "GET AWAY FROM HER!" (I'm really starting to like hearing him say that). He and Andi then proceed to beat the crap out of all of the assassins, Jack O'Lantern included. Andi picks him up off the floor with every intention of killing him, but Flash dissuades her, warning that if she goes down that path, she'll be alone. They then gift wrap the mercs for the arriving police and make a hasty exit.
Over the next few days, things settle down, though of course they aren't back to normal. Andi moves to her aunts house in Jenkintown after her dad's funeral, keeping in contact with Flash via a pair of untraceable Starkphones and keeping herself busy with regular outings as her symbiotic alter ego Mania. The fake Jack O'Lantern slips into a coma not long after being arrested and Venom's contacts continue to dig up anything they can find about Lord Ogre's operation. At his apartment, Flash thinks how he's neck-deep in the unanswered questions department (you should watch Lost pal, that would make you feel better). He knows just who to ask, but "he" isn't talking...not yet anyway... 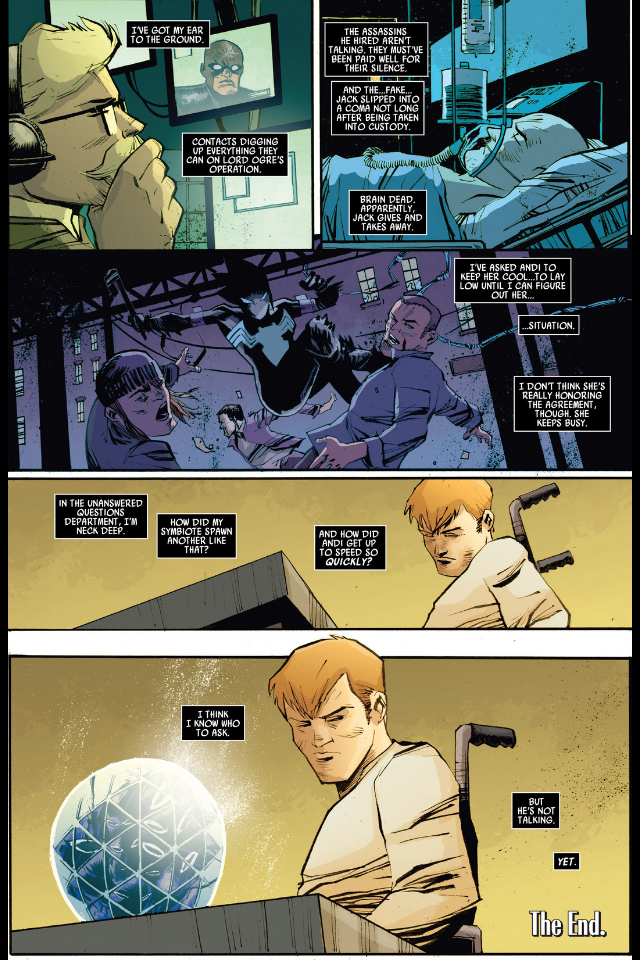 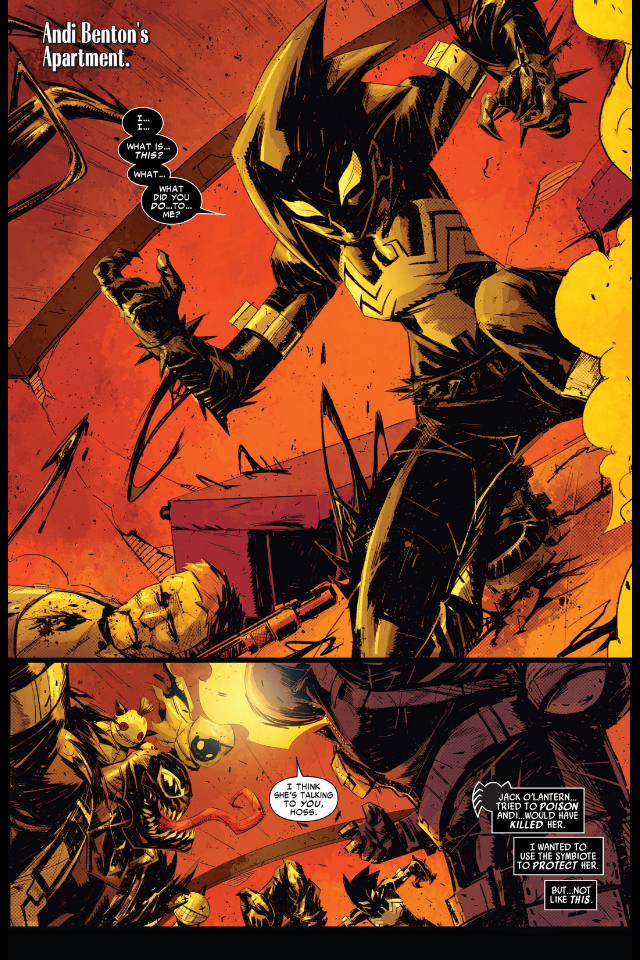 I've been saying for a while now how good this series has been since Cullen Bunn started the Toxin arc and this issue is no different. The cliffhanger from last issue is followed through in a believable way, and Andi's characterisation is handled with care by Bunn during this tragic moment. She's naturally full of rage and anger at her father's death, which also lends well to her fight scene with Jack O'Lantern. That doesn't mean that Flash receives any less depth in this issue, far from it. I like how tough the moral dilemma is for him in this issue, he knows Lantern is too far gone, but can he really kill an innocent pawn or allow Andi to kill? I also like that he calls himself out on his indecisiveness

Man, I thought Jack O'Lantern was creepy before this issue. The reveal about the Back-Up Jack prompted something of a grimace from me, and I'm sure that was the intention. He's arguably the nemesis of Agent Venom and now that he's killed Andi's father, that further compounds it. It's nice that Bunn was able to fit him in with a purpose so close to the series end.

Kim Jacinto's art is at it's best so far, and that's largely due to the fact that for most of the issue, characters are masked. There's a lot of cool shots here and the action certainly "heats up" (yeah, I went there) in this installment. After the awesomeness of the last story arc, I was worried that this next one would be disappointing in comparison. Niggling art issues aside, it looks like my worries are for naught and Venom looks set to go out with a bang by #42. Keep it up Cullen, keep it up... 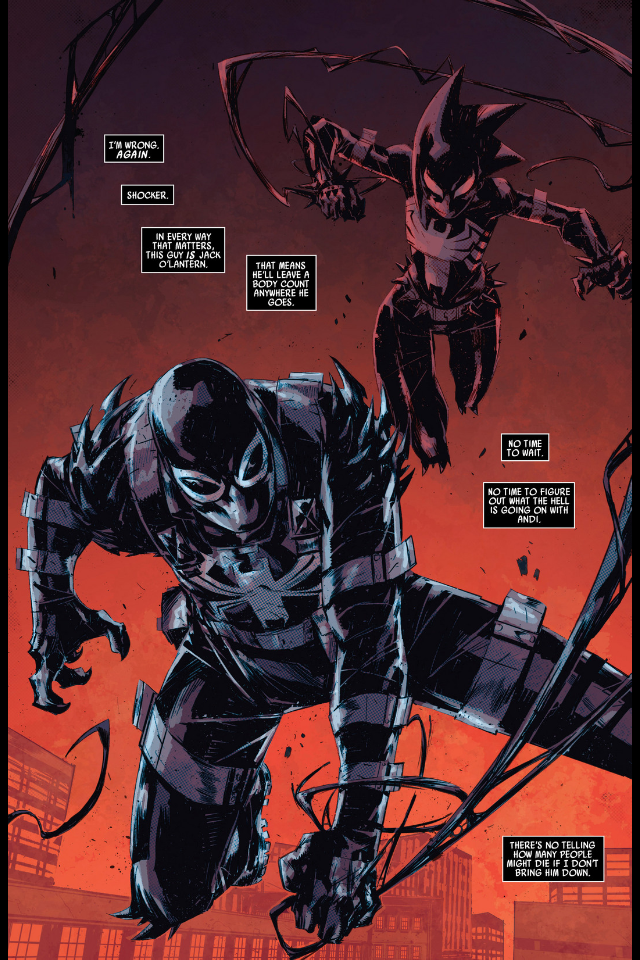