This issue is the reason I decided that this title should be reviewed here on the site. It begins with our crackpot Jackal, making more clones. We see one particular clone of Gwen Stacy, and some other demented six armed humans. 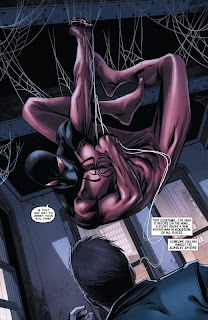 We next see our Superior Spider-Man, drawn spectacularly, swinging through New York city. He is enjoying Peter's life, until he reaches home that evening and finds Kaine waiting for him there.

With this Spider-Man being Doctor Octopus however, he feels
absolutely no bond with Kaine. At first he is unsure of who the Scarlet Spider really is, and can only vaguely recognize the voice. Once he realizes that it is Kaine behind the mask, Dr Octopus, as Spider-Man proceeds to kill him! ( Long ago, Kaine killed Dr Octopus in a one page battle )

Scarlet Spider holds back at first, confused as to what it going on. Because of this, Spider-Ock thinks Kaine is nothing but a weak confused man.

It doesn't take long however before Kaine grows tired of the nonsense and decides to give Spider-Ock a beating. Just as Spider-Ock is having his ass handed to him, Kaine is attacked by some disfigured Spider beings. 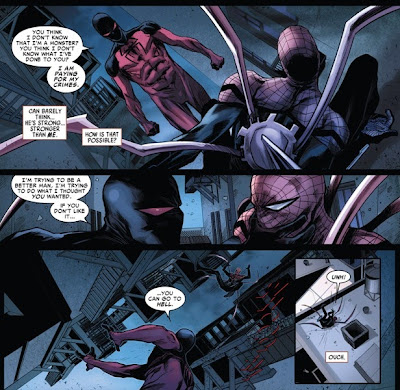 At first, Spider-Ock chooses to flee the scene and let Kaine die at the hands of creatures. However, he soon finds himself under attack as well. Kaine comes to Spider-Man's rescue, though his efforts are not appreciated. In the midst of more fight, Spider-Ock manages to find and opportunity to kill Kaine, while poor Kaine is busy fighting off a spider-creature. However he is stopped by Jackal.

At the sight of Jackal, Kaine rushes to kill him. However, he is stopped by Carrion, the virus from Superior Spider-Man team up # 1. 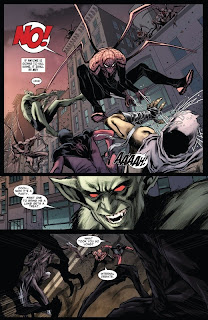 Kaine is about to be killed, for the third or fourth time today, when our Superior Spider-Man decides that he must be the one to kill Kaine. As such, he comes to Kaine's aid and attacks Carrion.

During battle, Spider-Ock observes Kaine's fighting style, noting that he is prepared to kill, but lacks strategy. Ock, takes note of this to use at his advantage later. In the midst of the fight, both the Spider brothers are blasted by a gun shot by a Gwen Stacy clone, rendering them both almost helpless.

The story continues in Scarlet Spider # 20, reviewed by Mike Mcnulty.

Unlike the last issue, this team up issue was fantastic. Art is again great, but since the story has some depth, I will not be talking about the art.

In this issue, we see Kaine, trying to approach Peter Parker, whom at first he sort of deemed as a mentor, or person to look up to. His encounter with Dr Octopus as Spider-Man however very quickly changed his mind.

This issue portrays Kaine, as good, but not at all weak, or willing to get bullied too far, as is illustrated when he beats the $#!T out of Superior Spider-Man.

It was great to see the two Spider Men fighting side by side against other spider things. I would however have loved to see a real team up between Peter Parker Spider-Man and Kaine. I'm sure it would be a better story to tell.

This encounter is going to add unnecessary tension between Kaine and Spider-Man, like an affair in a TV series between the main character and some side character we know will not be sticking around the show by the end of the season. ( Make sense?) Dr Octopus is really going to end all trust between Kaine and Spider-Man, possibly even changing Kaine's new anti hero perspective on life. Peter Parker will have plenty relationships to mend if and when he finally does get back into his body.

This story just makes you feel semi sad for Kaine, as he looks to Spider-Man his 'brother,' as he actually calls him in one panel, only to be greeted by hate, once again adding more depth to Kaine's character.

Regardless, nothing is better than seeing two spider guys in one panel, whether its with Ben Reilly, Miles Morals, Parker, Ocatavius, Spider-Man 2099 (coming soon) or even Venom and Carnage.

Overall, this was a great read, especially for those Clone Saga fans. Till the next issue... 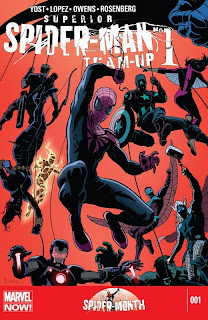 When this issue initially came out, I thought it not too important to do a review as the story is really quite bad.

We start with Spider-Man, beating Cloak and Dagger, then Daredevil, then gravity, Iron Fist, Power Man, Sun Girls, Moon Knight, Doctor Strange, and a bunch of others. As I mentioned, the actual plot line is not very deep.

Captain America gathers the Avengers to stop this atrocity! After battling it out with Spider-Man, the Avengers have him captured and questioned. At this, Spider-Man explains how he has been tracking a virus that has been jumping from hero to hero all day. Spider-Man's words soon prove to be true when Hyperion, a powerful bloke from another Universe, reveals himself to be infected with the virus ( not very clever)

The Avengers then begin an all out attack on Hyperion. Spider-Man explains how he had a weapon designed to destroy the virus.

Ms Marvel, Hulk, and Thor take turns at Hyperion, eventually bringing him down, giving Spider-Man enough time to blast Hyperion with his special gun. The virus leaves Hyperion and he returns to his normal mental state.

Apart from the art, this was a horribly boring issue. There was no real team up in this issue. Spider-Man pretty much ran the whole show by himself, or could have if the Avengers had not interfered.

1) The Avengers now trust Spider-Man, despite his maniac ways

2) The Superior Spider-Man is building his own team, with his captured former Sinister Six friends ( shown in the last few panels)

3) Jackal was behind the virus, and will be coming to get Spider-Man in the next issue.

Having said that this was a rather boring, issue, I will highlight a little more on the fantastic art. Spider-Man's new suit is drawn very nicely here, much better than I have seen in Superior Spider-Man. It has some similarity to Ben Reilly's Spider-Man suit, with a darker feel, yet maintaining the same Spider-Man theme. 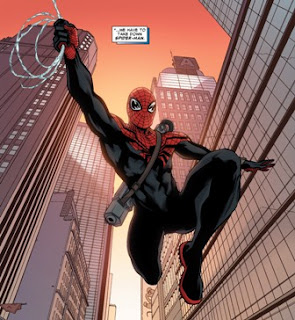 The only thing I didn't quite like about the art is that it carried some slight Anime/ Manga feel as can be seen below. 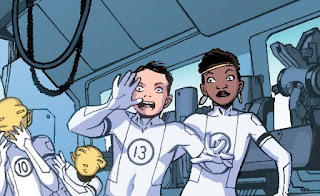 Probably my favorite part in this issue is when Spider-Man complains that the Avenger's weakest members are protecting him, while he finds his gun - Captain America, Hawkeye, and Black Widow, typical Doc Ock humor!