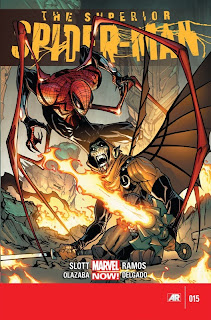 This issue begins with Hobgoblin stumbling into a little fix-it shop requesting for some new gadgets. He tells the shop owner that the KingPin is dead and he needs some new gadgets to fight Spider-Man off with.

The shop owners tells Hobgoblin that it will cost him. He then gets his 'best man' to get to work - aka Tiberius Stone, former employee at Horizon labs, traitor, and a wanted dead man by KingPin. With the KingPin dead however, Stone decides that it is time he comes out of hiding, and gets some revenge on Hobgoblin.

Back at Shadowland, Spider-Man waits around to find KingPins body. At the site, Captain Wantanabe becomes convinced, as Carlie is even more convinced that Spider-Man is not the same Spider-Man as before. Once 'Fisks's body' is located, Spider-Man leaves the scene, telling them to inform him when they find Hobgoblins body.

Back at the Bugle, Phil Urich just scored big brownie points with everyone at the office, not to mention Norah, and got a big check for his video footage of the fight at Shadowland. Unfortunately, the money is not enough to cover for his new gear, and pay the rent owed to the original Hobgoblin, Kingsley, for rights to use the costume.

Kingsley, gives Phil a call, requesting his rent money, and tells Phil to go rob a few banks if he has to. Unable to earn enough money to cover all his expenses, Hobgoblin resorts to robbing banks, catching Spider-Man's attention.

Spider-Man however begins to suspect that something is wrong with his spiderbots as he never detected any of Hobgoblins whereabouts, while every other media source managed to get footage of the robberies. 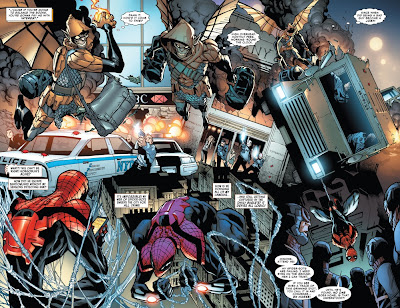 Meanwhile, Aunt May, Mary Jane, Max Modell, and Ana Marconi, are all wondering what has happened to Peter, seeing that he has been missing for several weeks. Peter Octopus finds it hard to cope with his duties as Spider-Man, while juggling Peter's personal life. Though they all keep calling, Peter octopus eventually answers Ana's call and meets up with her. 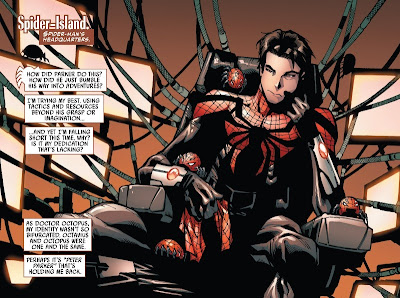 Coming back to a more interesting plot-line, the Goblin King realizes that Hobgoblins actions will cause Spider-Man to notice a glitch in his spiderbots. As such, he sends word to his men to stay low as he undoes the glitch to help Spider-Man catch Hobgoblin.

Spider-Man eventually locates Hobgoblin and battles him. Not far away, Tiberius Stone also watches and secretly disables the weapons he made for Hobgoblin. This puts Hobgoblin at a disadvantage, forcing him to ditch his costume and flee.

At the bugle, Phil Urich is frantic and asks for a new advance for some of his other video footage. Just then, Spider-Man, who has taken advantage of his working spiderbots again, broadcasts to the whole city who Hobgoblin really is, placing Phil is a really difficult situation.

Thoughts
In this issue, we see Phil Urich, getting into more and more trouble only because he needs money. There are essentially three kinds of criminals. The Kinpin type crooks who are greedy and want more, the Phil Urich type criminals, who commit crimes because they need money, and then we have psychotic criminals like the Joker.

The trouble with Phil Urich is that he wants to keep his current identity as Phil Urich first, and Hobgoblin second. Unlike Robert Kingsley, who is a pure villain, Urich is still holding on to his 'good' side. It is for this reason that he has found himself in such a tough financial situation. Unless you are Tony Stark or Bruce Wayne, it is pretty hard to maintain a gadget reliant costume persona with hard earned money.

In my opinion, this will be the turning point for Urich. He will either surrender and give up, or turn around and become an all out criminal.

As for Carlie and Captain Wantanabe, we once again have a short scene building up a future story that is long overdue. Somehow, all the characters in this book seem to need plenty of evidence to realize that the Superior Spider-Man is not the real Spider-Man. We even have another scene with Mary Jane, almost coming to the same conclusion as Carlie, yet still finding it unbelievable - 15 issues later. 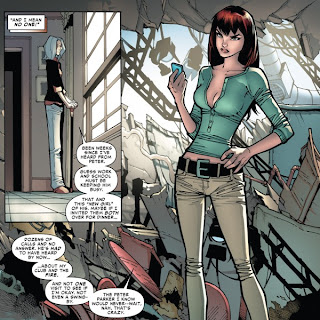 To be fair however, Carlie was the only one who was told by Peter, in Doc Ock's body, what had actually happened.

I'm not entirely sure where the story with Tiberius Stone is leading. In this issue, he is using his nerd powers to look badass. However, I don't see him going very far, especially once the Kingpin comes back out in the open.

My favorite story in the making is still the Goblin-King. I thought it was a brilliant move to turn the spiderbots back to full capacity, as a way to throw Spider-Man off track and eliminate the Hobgoblin.