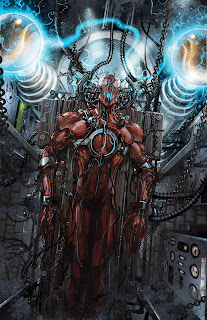 Welcome back to another bloody slaughter fest courtesy of your very unfriendly, very non neighborhood Symbiote: Carnage. When we last left our little red headed hate monger, he was pulverizing a very unsuspecting Wizard until he was immobilized by a man named Klaw. Klaw seems to have a distinct advantage in subduing Carnage with his arm cannon, but will this be enough to control him for their purpose, or even keep the creature from tearing them asunder? Find out right here and right now. 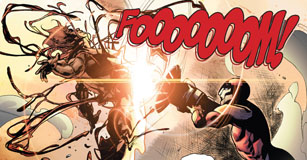 Synopsis: Caution: Mad Scientist at work, should be the sign on the door, as the Wizard is about to do his best Dr. Frankenstein impression. In some strange and seemingly underground laboratory, Klaw, and the Wizard are staring at a helpless Cletus Kassady strapped naked to an operating slab.

The Wizard laments about his mistake of trying to control Kassady’s broken mind instead of aiming for the symbiote itself; a mistake he is eager to correct. Enter Dr. Karl Malus, a genius surgeon  with a creepy Dr. Kevorkian vibe. The Wizard explains that he was recruited to assist in the operation as well as represent the 4th member of the (not so very) Frightful Four.

Alas the Wizard’s next four attempts at controlling Carnage’s mind end in violent disaster, yet the Wizard pursues, at which point Dr. Malus really begins to question the Wizard’s sanity. Speaking of which, Klaw brings up some history about how Black Bolt de-habilitated the Wizard’s mind as a punishment for his past crimes, and that the Wizard sometimes slips into states of delusion.

Meanwhile, near Manhattan, our very own Superior Spider-Man is doing his usual run, when he intercepts news of The Wizard’s kidnap of Carnage. Spidey comments that he is ever too busy (with the Jackal) to be bothered by the situation, yet he reflects on his worry and disappointment towards his former colleague; “Bentley” aka the Wizard. He wonders if this is just the fool hard efforts of a desperate and dying man. Octo Spidey also express his concern that due to Black Bolt’s rendering, the Wizard only has a few weeks to live.

Back at the lab, the Wizard on the verge of having a mental breakdown comes to a revelation with the help of Dr. Malus. Malus explained to him how agent Venom was created by merging an extracted symbiote with a handicapped man and that extracting the Carnage symbiote was nearly impossible, due to it being bonded to Kassady’s DNA. At this point the Wizard realizes exactly what he needs: Dr. Malus; the missing X factor in his plan. It all becomes clear; transplant the Symbiote’s mind into the Doctor’s brain! Although, when the Doc. realizes this he obviously retreats, yet Klaw makes sure he participates.

Strapped to the table and drugged up, Dr. Malus receives the psychotic mind of the symbiote.

Thoughts: So the Wizard was finally able to achieve the goal he ever so stubbornly fought for. Say what you will about the Wizard, but you have to admire his sheer determination. He is quite lucky to have a guy like Klaw as a loyalist or else he surely wouldn’t be able to accomplish much.

This issue really illustrates the relationship between Klaw and Wizard, demonstrating that although the Wizard is extremely arrogant and abusive towards Klaw, Klaw still has a sense of responsibility and perhaps sympathy towards his frustration.

The Wizard is really an eccentric guy, and a lot of times the most eccentric of people are the most brilliant. It’s that type of chaotic obsession and over the top ambition that makes villains like this so much fun, and entertaining. Therefore I have to take my hat off to the writer for including that excellent characterization.

Also the writing brings up some very interesting parallels to recent events in the Spiderverse. I’m obviously talking about the mind switch between Doc. Ock, and Peter but also, the fact that Otto was in a very similar position as the Wizard as recently as ASM 698, yet here we have him commenting without realizing exactly that. Just goes to show that Ock’s ego rarely allows him to admit he was once just as vulnerable, just as obsessed, and just as desperate. Ironic?

Getting to the artwork; I find it once again pleasing to the eye. No surprise there. Page 12 gives us a stellar rending of Spiderpus in his brand new suit. I’m very thankful for that.

I also appreciate the similar look and design of Dr. Malus when compared to Doc Ock; the spectacles, the bowl shaped haircut, even the scientific medical attire fits the bill. The fact that Dr. Malus is crippled creates and interesting parallel to Flash aka Venom. So in theory this new Carnage is part Doc Ock, part Venom, and part Carnage…Wow, maybe he really is Superior?

I can’t wait to see what’s next. Does Dr. Malus still have his own mental state? Will he seek revenge on those that crippled him? Will he follow the Wizard’s orders? It’s going to get all kinds of crazy.

Stay posted for my part 3 of 5 coming soon.