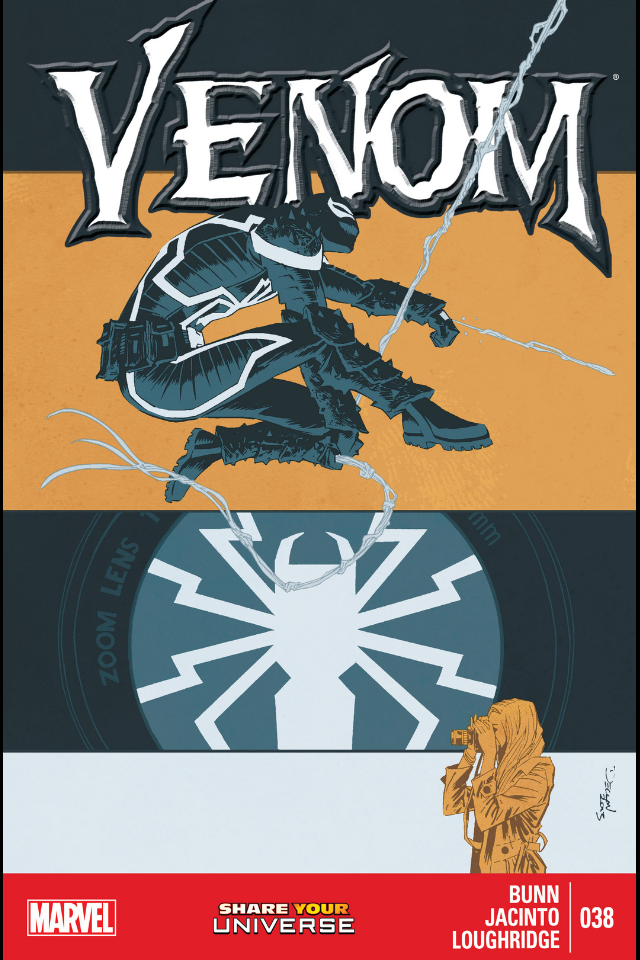 Hello everybody and welcome to my review of Venom #38. ol' Flash Thompson has one heck of a bounty on his head, and with several different mercenaries, as well as an old foe, out for his blood, Flash has one person to turn to...Reporter extraordinaire Katy Kiernan! I probably would have contacted Beast again like Venom did in #32, or Valkyrie perhaps, but to each his own, onto the review. 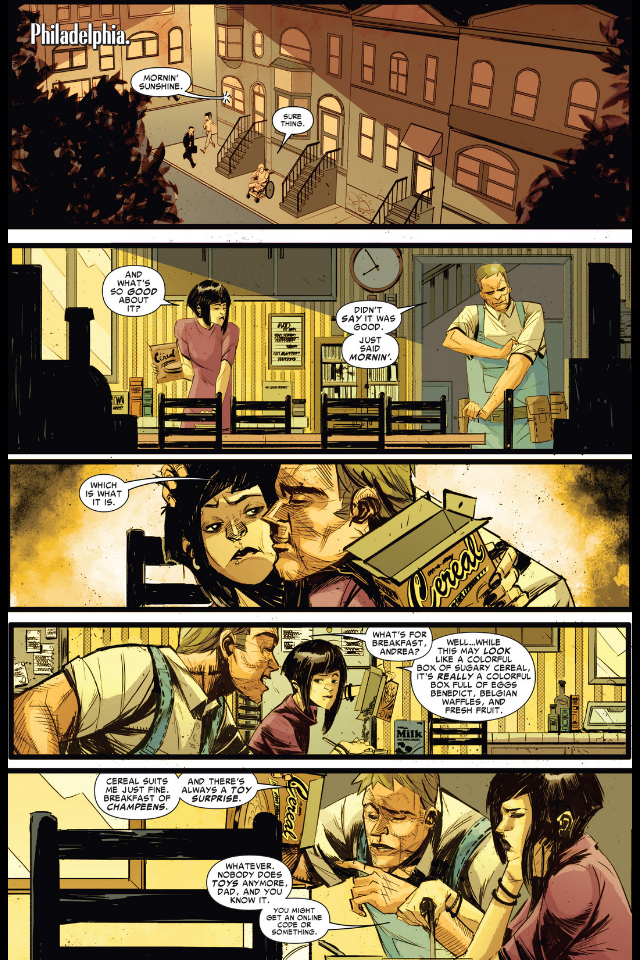 Andi is having cereal in the kitchen when her father arrives, after some mildly cute breakfast banter, Andi asks her dad if he's ever known a secret about someone (okay, so she definitely knows Flash is Venom). Her father replies that secrets have a way of hurting people, either the people who keep them or the people blindsided by them.

Meanwhile, Katy Kiernan (with lunch) sit back down on a park bench with Agent Venom, all the while trying not to laugh at him, since he's used the symbiote to shapeshift into a truly miserable-looking old woman since Katy doesn't know his true identity.

As Katy introduces Flash to the various people she knows who can help, such as a jeweller who secretly stocks Skrull weaponry (What the hell!) Flash talks about how he still idolises Spidey, but that it's time to stop pretending and start doing things his way rather than pretending that he's like his hero, as they operate on different fields (wait till you get a load of the "Superior Spider-Man" Flash). 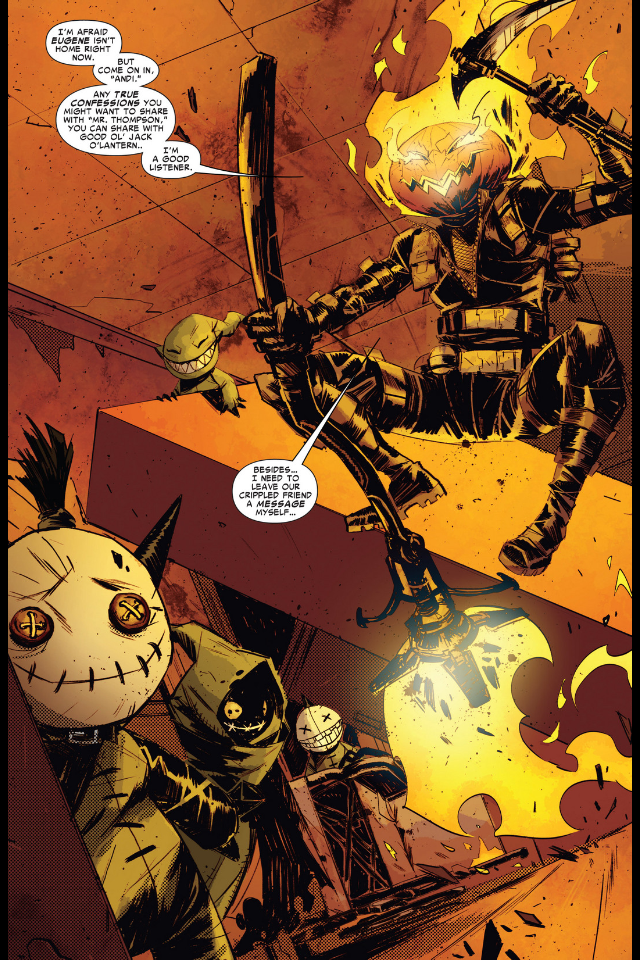 Later that night, at Andi's apartment, Andi and her father are watching a game show, and apparently they're both several letters ahead of the contestants. Andi steps outside to supposedly get some air, but she really is headed for Flash's apartment to discuss his little secret.opens the door only to find Jack O'Lantern instead, whose just finished wrecking Flash's apartment (Man that's going to piss Venom off.).
He promptly tries to kill her, but Andi flees back upstairs with ol' Pumpkin Head in "hot" pursuit. Andi reaches her apartment and slams the door shut, but she's barely warned her dad when Jack comes smashing through. He starts talking about all the nasty things he's going to do, but he's soon interrupted when Venom football tackles him to the ground (told you he'd be pissed off about his apartment). Flash informs Eugene that he made a  bad move coming here (he didn't use "clean" words though) and now he's going to put him down. Jack obviously has other ideas and breathes fire all over Venom, before slashing him in the stomach with his scythe.

Jack prepares to take off Flash's head, but he doesn't count on Andi's dad walloping him over the head with a wrench. Jack retaliates, hitting Andi's father with his scythe. Venom attempts to hold him back with his tendrils, but Jack is too slippery and manages to stab Andi's dad (we hardly knew ye sir). 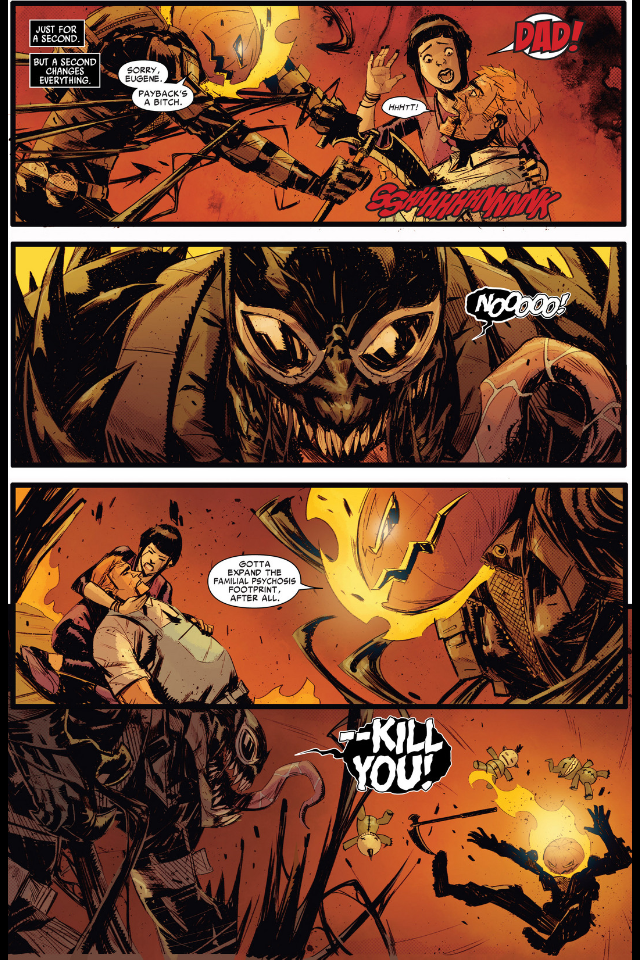 Venom goes nuts and yells that he's going to kill Jack, but Jack (like the little s-word that he is) throws a handful of gas grenades in Andi's direction. Not wanting to see Andi die too, Flash extends part of the symbiote to her so she'll be shielded from the gas. To everyone's surprise however, that part of the symbiote completely envelops Andi, giving her a costume of her own. Looks like we have another She-Venom on the block... 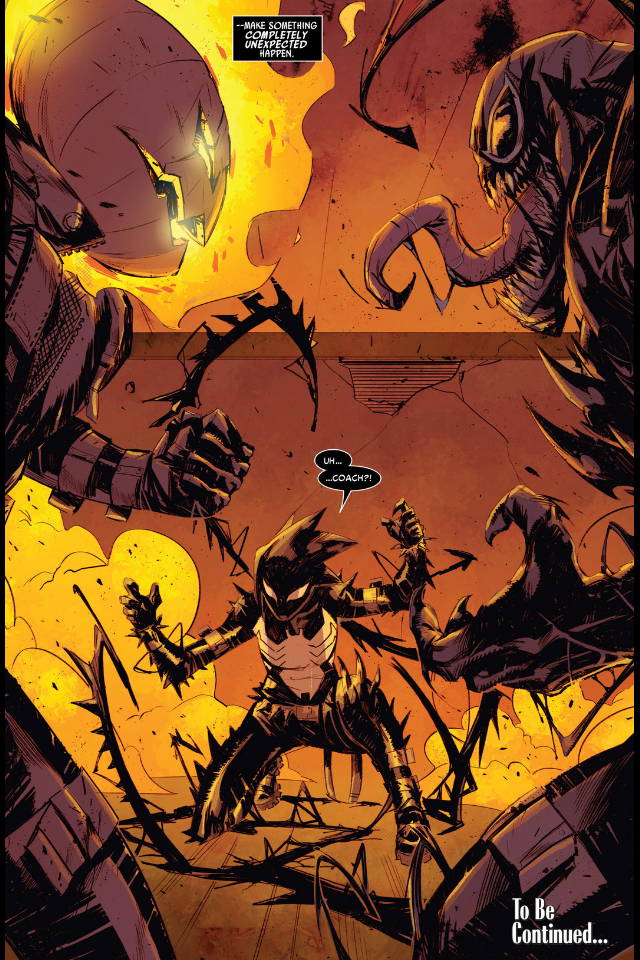 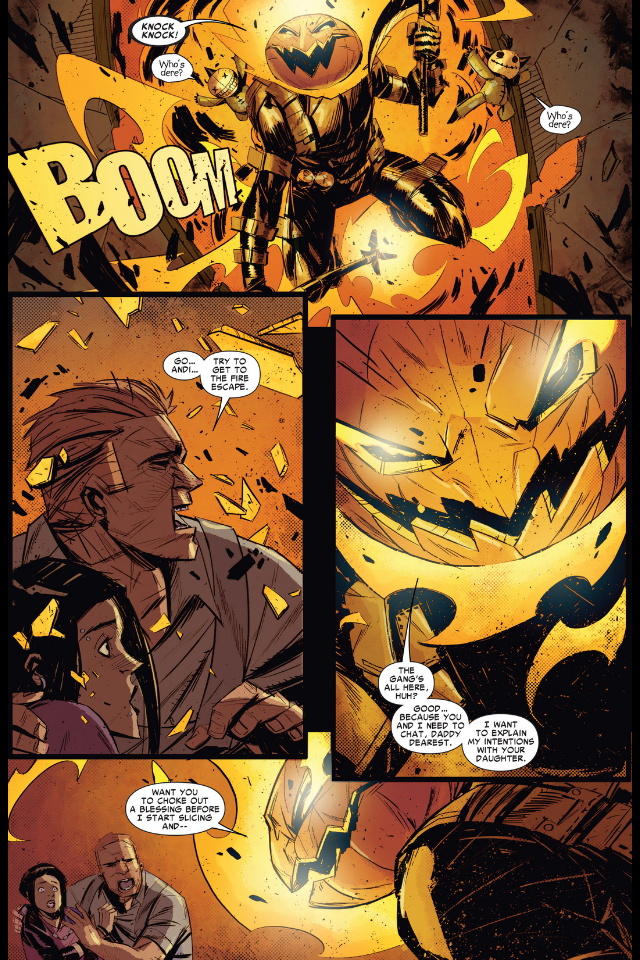 Once again a mostly solid issue. I'm really enjoying watching Flash entrench himself in Philadelphia and expand his modus operandi. Flash's speech about how he's never going to operate like Spider-Man was brilliant to read, and his using the symbiote as a metaphor for what he's doing was really cool. There's also an abundance of humour in this issue. The early scenes of Katy & Venom interacting are really funny, particularly with the added gag of Flash pretending to be a grumpy old woman. I can't look at that disguise without smirking.
This issue also takes steps towards fleshing Andi out as a character. She's a lot more sympathetic now than before, where she just seemed like a typical, moody teenager. I was worried she might try and blackmail Flash into letting her fight with him, but it looks like her fathers death will be the catalyst for her becoming the Venom version of Robin, her Venom hair even looks like Carrie Kelly. Andi's father is something of a problem though. Because he's only just been established, killing him now robs the death of some of it's weight, though this could be solved with the use of flashbacks from Andi's perspective.

While Kim Jacinto's artwork is still rough around the edges, the artwork in this issue is a big step-up from last issue. The human faces look decidedly softer this time and the fight between Venom & Jack O'Lantern kicks so much ass. I also like the nifty touch of pointing out who Flash is pretending to be. Overall, while I would have liked more time for Andi's dad to be developed before he was killed off, the stories still going really well and the artwork's improving dramatically, so I can't really complain... 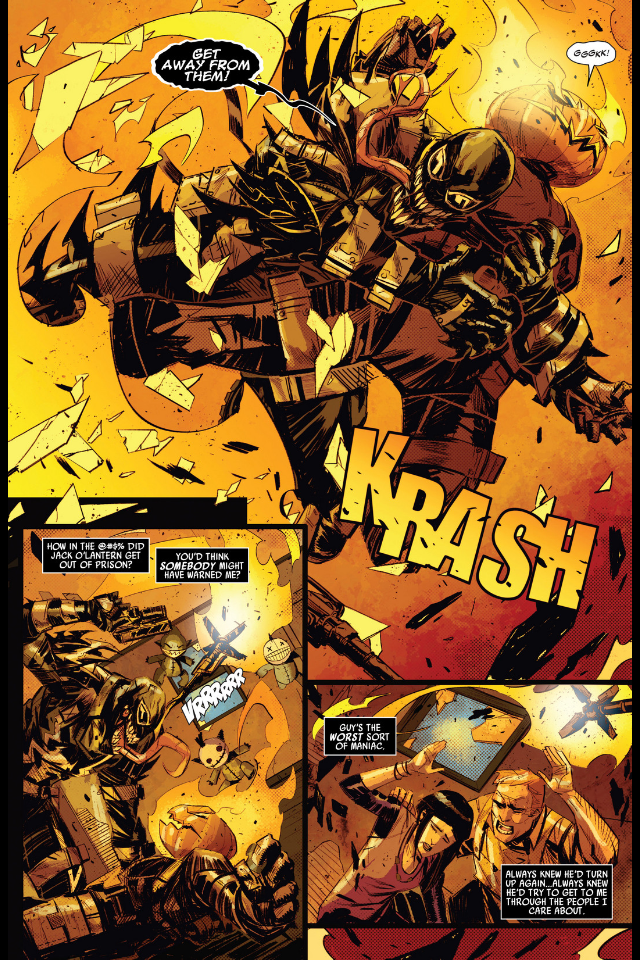