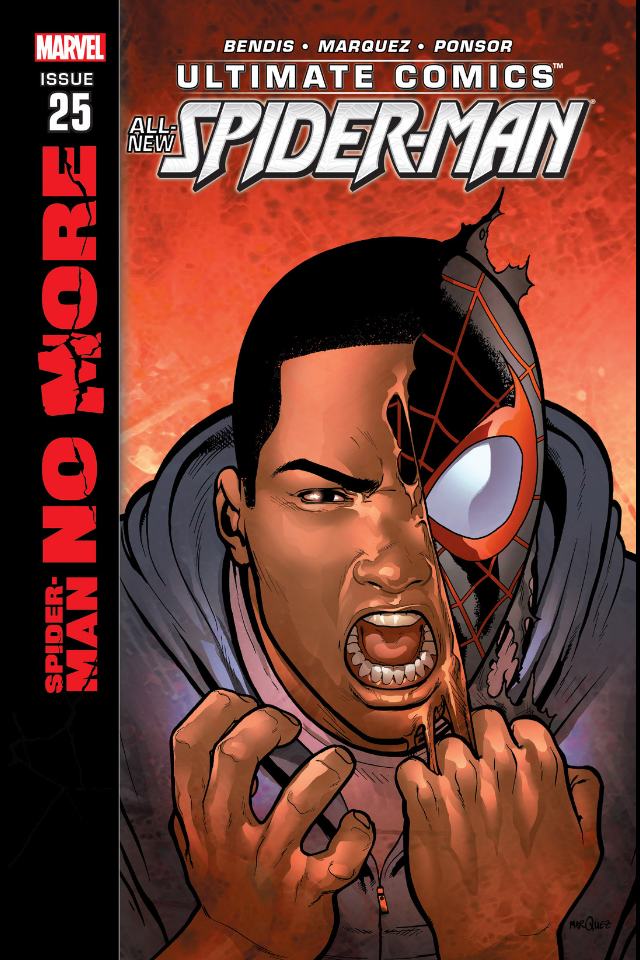 Hello everybody & welcome to my review of Ultimate Comics: Spider-Man #25. I've got to say, this is some pretty cool front cover imagery, showing that Spider-Man is more than skin deep for Miles Morales, he's at the very core of Miles being...and that's just awesome.

In Queens, New York, May Parker arrives home (which she seems to be planning on selling) after grocery shopping to find Gwen Stacy sulking on the sofa. Gwen tells her everything that happened at the restaurant, including the fact that she slapped Miles and called him a coward. She says someone needs to be Spider-Man and that it was him. Aunt May replies that perhaps they should let the boy decide who he wants to be.

Meanwhile, Miles Morales is chatting/studying with his girlfriend Katie Bishop. Ganke passes by without talking to them which alarms Katie a little bit since those two always talk. She asks if Ganke is mad because Miles is with her and now Miles has to hear once again that someone thinks Ganke has a thing for him.

Of course, the real reason Ganke's mad is because Miles didn't get involved as Spider-Man during the restaurant incident. He tries to convince Miles to don the costume again, saying he's had over a year to get over his mothers death (yeah, sensitivity is not one one of Ganke's strong points.). Miles yells that everyone's pushing him and that Ganke doesn't understand. Ganke replies that everyone's pushing him because everyone believes in him.

We then flash back one week ago to the secret labs of the Roxxon Corporation. Ty Johnson & Tandy Bowen get to their feet amidst the destroyed laboratory. While they express bewilderment over their current predicament, Dr. Samuel Sterns pulls himself from the rubble, pleased at the success of the experiment. He morphs into a Jackal-like form (what the hell!) and attacks the duo to test their new powers. They fend him off, shocked too at their new abilities, and swiftly escape. Dr. Layla Miller, who had just regained consciousness, dryly informs Sterns that he lost the patients.

Back in the present, Miles is reading today's Daily Bugle, which is slandering Ty & Tandy, though it names them Cloak & Dagger, so at least the names are established. His dad, Jefferson, surprises him from behind and suggests they try dinner again, this time with no one blowing up the restaurant. They both agree on pizza since they'll be little chance of history repeating itself that way.

Jefferson asks for Miles to give him half an hour to rest. Miles heads up to his room only to find Jessica Drew/Spider-Woman sitting on his bed, holding the new Spider-Man mask she gave him in her hands. She asks him to close the door. Miles starts to order her to leave, but Jessica offers instead to tell him about the connection they share, something she'd withheld from him before. Miles decides to listen and Jess reveals to him that she's the clone of Peter Parker, and that's the thing they have in common. They were both made out of attempts to copy Peter Parker. 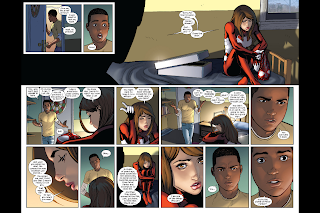 Jessica tells Miles about Cloak & Dagger being guinea pigs of Roxxon, but S.H.I.E.L.D is turning a blind eyes since their secretly deep in business with the corporation. She says she's doing this to show Miles why he needs to be Spider-Man. Why there needs to be a Spider-Man. Miles leaves his dad a note saying he had to go back to school for a test, while in reality, he finally resumes the mantle of Spider-Man and heads off with Spider-Woman... 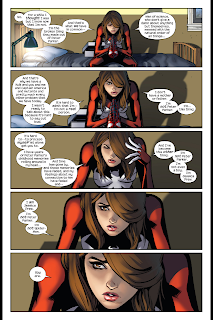 While the previous issue devoted a lot of time to establishing Cloak & Dagger's backstory, this one shifts the focus back to Miles and the people around him. This issue moves at a fast clip and involves so many characters, yet it never feels as though it's skimping out on important moments. The scene with Miles & Jessica Drew where she talks about her identity issues is a brilliant scene. Bendis takes a character whose been quite short with Miles during this series and puts us square in her head. It made me shiver a little thinking what it must be like to know that you're a clone. I said last issue that Bendis might be setting up a romance with Gwen & Miles, here it looks like he's establishing a brother/sister dynamic with Miles & Jessica. The scene with Aunt May & Gwen was also rather nice, particularly when May glanced over at the picture of Peter & Uncle Ben, his loss is still heavily in the background, but I don't think it feels overbearing, which is great for Miles.
Speaking of Miles, I've really come to like this character. He is absolutely a worthy successor to Peter Parker and his characterisation is wonderful. I didn't talk about Katie in my previous review since she's not had much to do, though I feel we'll soon get some development there. Cloak & Dagger being relegated to flashbacks is fine with me. Since Miles returns as Spider-Man at the end, they'll be plenty of time to devote next issue to their characterisation. Samuel Sterns confused me a bit though. Is he supposed to be the Ultimate version of the Jackel? There's definitely a Miles Warren in this reality so I'm interested as to why Bendis didn't put that character on the Roxxon Brain Trust as well?

Moving onto the art now. The last page, oh my god the last page. David Marquez' art is just gorgeous. I don't need to say anything else, it's that good. Right now this series has everything I want from a Spider-Man comic. Thoughtful characterisation & depth plus beautifully polished art. Please Galactus, don't destroy the Ultimate Universe yet, this series is too good to lose... 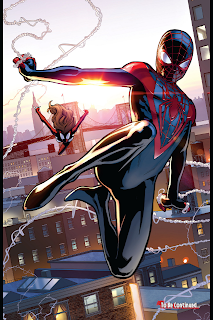