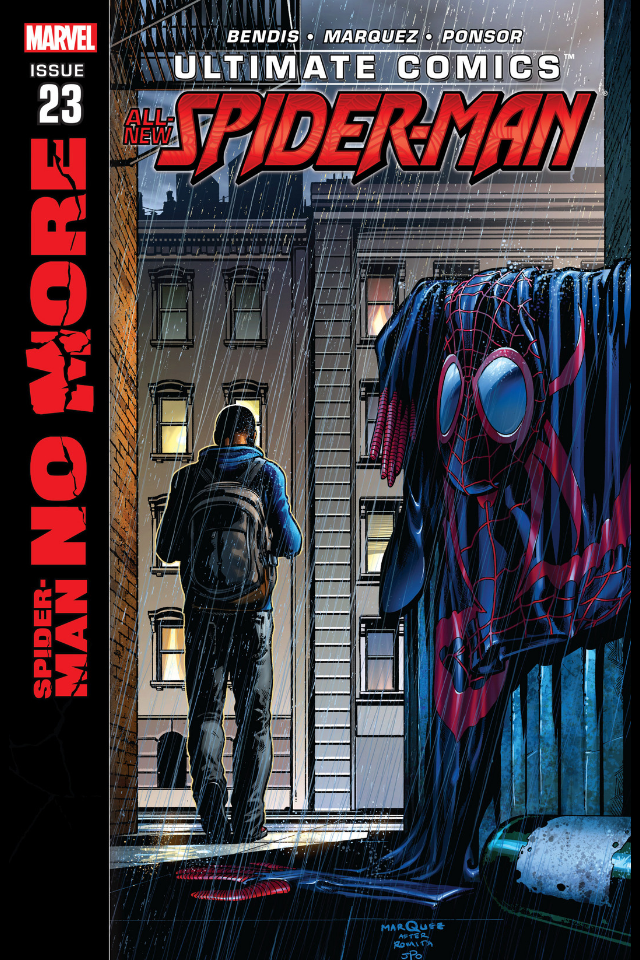 Hello everybody & welcome to my review of Ultimate Comics: Spider-Man #23-24. It's kind of fitting that I'm starting as the new regular reviewer for Ultimate Spider-Man with this storyline as it's a new chapter in the ongoing story of Miles Morales. I couldn't be more excited. We're a little behind so I'm going to review these two issues together and hopefully I'll have the next one out soon after. 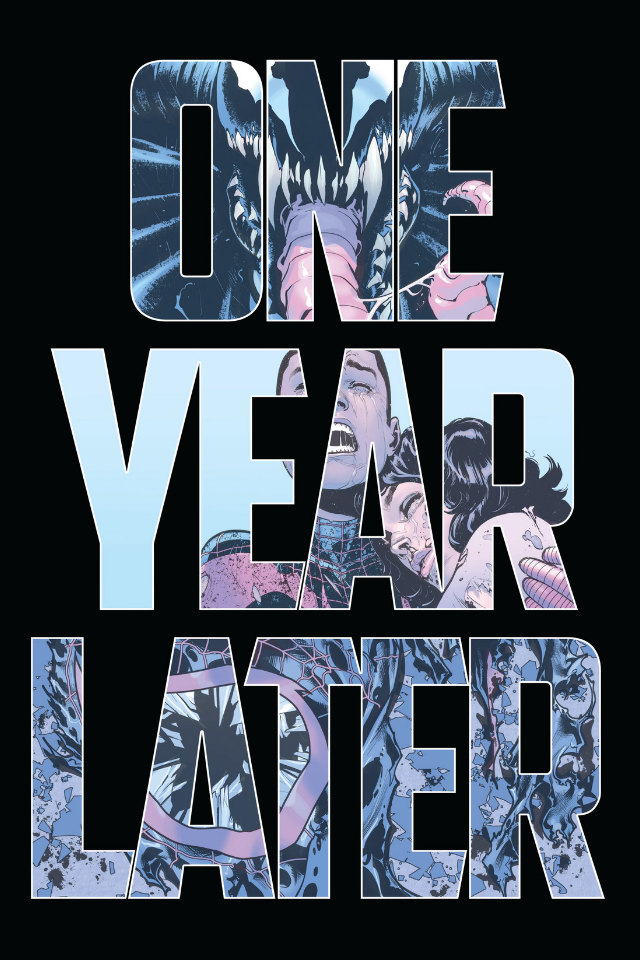 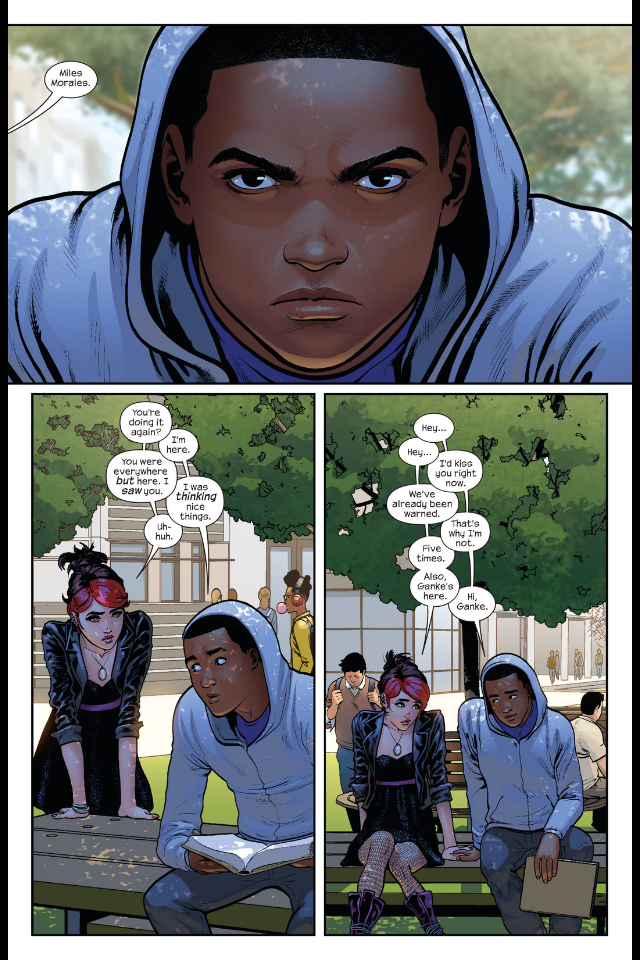 Miles Morales is sitting outside Brooklyn Visions Academy brooding. He is greeted by his new girlfriend, Katie Bishop, with their following conversation (about being warned not to kiss five times already.) in turn being interrupted by Ganke, who is distraught over missing out on a limited edition LEGO Triskelion.

Katie leaves to email her parents (though Miles believes otherwise) leaving Miles to tell Ganke that he's going to tell her who he "used to be". Ganke doesn't take to the idea since it could put her in danger, but Miles reminds him that he isn't that person anymore. Ganke says he's just on a break and that it's impossible for him to quit permanently, but Miles remains convinced that he's done crime fighting.

He's then forced to cut the conversation short in order to meet with Jessica Drew aka Spider-Woman, who gives him a box, which she calls a present. Miles rejects both the "present" and her attempts to convince him to come back, and promptly leaves when she mentions his mother, telling Jessica not to come around there anymore.

Later that day, Miles returns home, being greeted by his dad, Jefferson, who asks if he's home for dinner. Miles replies yes and asks that they go out, which his father agrees to and asks Miles to give him a few minutes. Miles goes up to his room only to find the box Jessica tried to give him lying on his bed. He tentatively opens it to find a brand-new Spider-Man costume, complete with web-shooters and a note from Jessica saying, "a year is a long time. How many people could you have saved? You fall off a horse, you get back on." Miles stares at the picture of him with his mother, struck by flashbacks of her death, and crumples the note in his hand. His father calls up, asking if he's ready. After answering "almost", Miles hides the box on his top shelf before heading downstairs, telling his dad they should find a place they haven't been before. 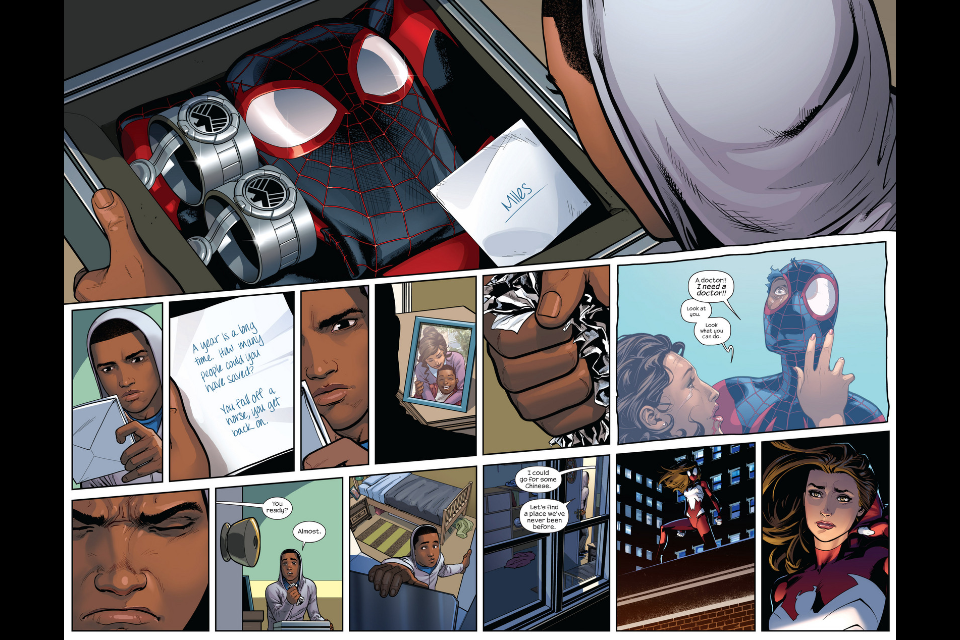 Outside, Jefferson tells Miles that he's spoken to his lawyer , who believes the police isn't going to just settle, they're going to write a check, which will more than pay for Miles' college education and a holiday. As they arrive at a Chinese-style restaurant, Jefferson suggests they just leave this "crazy city" and move to England or Hawaii, but Miles reminds him that he has things going on in New York, like Katie, which leads to an awkward revelation by Miles' dad that he and Miles' mum thought that he and Ganke were, well, "together".

The waitress arrives to take their order. Miles is surprised to discover that she is Gwen Stacy, who in turn recognises him. Miles & Jefferson order their food and after Gwen leaves, Miles excuses himself from the table to talk to Gwen. She gives him an unexpected hug and tells him that he can talk to her about his mothers death (since her father was killed by a Spider-Man impostor back in the Parker days). This just pisses Miles off though and he walks away, telling his dad he wants to leave. Jefferson doesn't question his son, only asking if he's sure, and he makes up a vague excuse to the owner, who rightly thinks it has something to do with Gwen.

All of a sudden, Miles' Spider-Sense flares up, just before an explosion rocks the restaurant. After making sure his dad's okay, Miles gets to his feet and goes to the shattered window, despite Jefferson's warnings, to have a look with Gwen. The cause of the explosion is the criminal Bombshell, who is locked in combat with a pair of vigilantes, a boy and a girl. Cloak & Dagger... 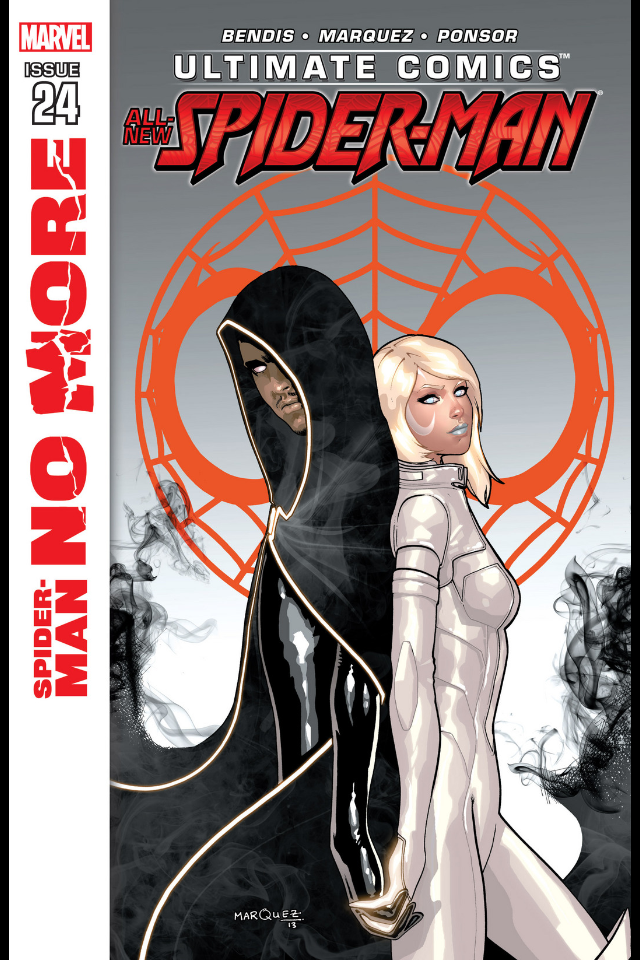 Cloak & Dagger engage Bombshell in combat while Miles tries to get Gwen away from the window. Bombshell wonders what the hell is going on with them, Gwen wonders who they are and Miles just reckons Ganke would know since he likely follows them on Twitter (He probably does.).
Through flashbacks we learn about Cloak & Dagger. Ty Johnson & Tandy Bowen, the student council presidents of their respective schools, were both left in comas after a traffic collision six months ago while on the way to Tandy's prom. The Roxxon Brain Trust (consisting of doctors Layla Miller, Samuel Sterns & Arnim Zola III, as well as Nathaniel Essex) has them declared dead soon after. Three days ago, they were both inserted with dark matter as an experiment, awakening seconds after the procedure and manifesting strange, new powers. 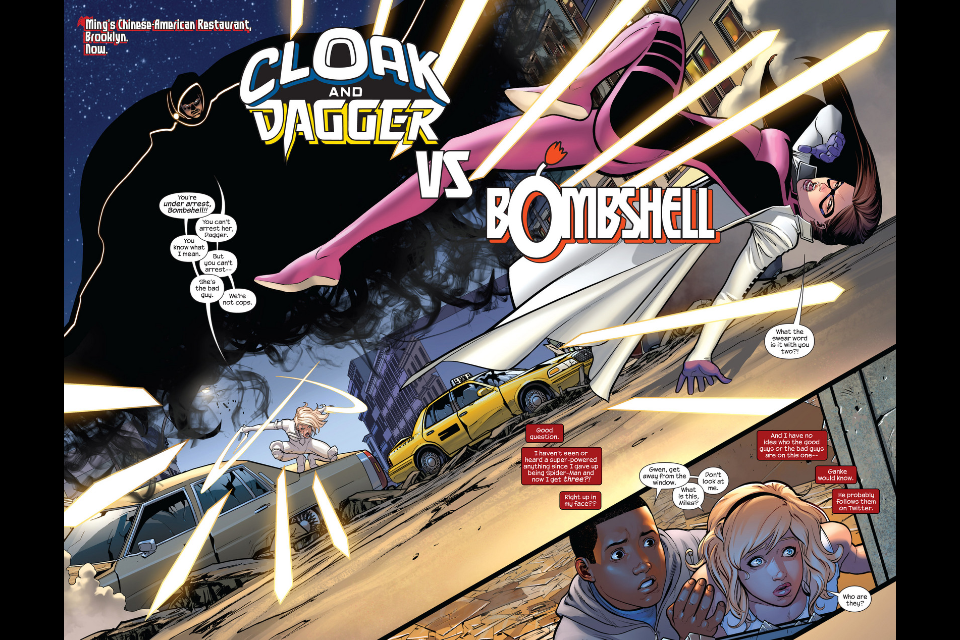 Back in the present, the fight spills into the restaurant, forcing Miles, Gwen, Jefferson and the owner retreat out the back. Gwen offers to distract Jefferson so Miles can get involved, but Miles chooses the moment to tell Gwen that he's Spider-Man no more. In response Gwen slaps him in the face and tells him that her father died the same way his mother did and that he should get up. Miles just walks away. Meanwhile, Cloak subdues Bombshell by engulfing her in his cloak. Dagger tells him she's still not used to this, Cloak replies that he doesn't think they ever will be.
Later, back at in his bedroom, Miles stares at the Spider-Man mask given to him by Jessica Drew. He utters the words "No more...Please..." 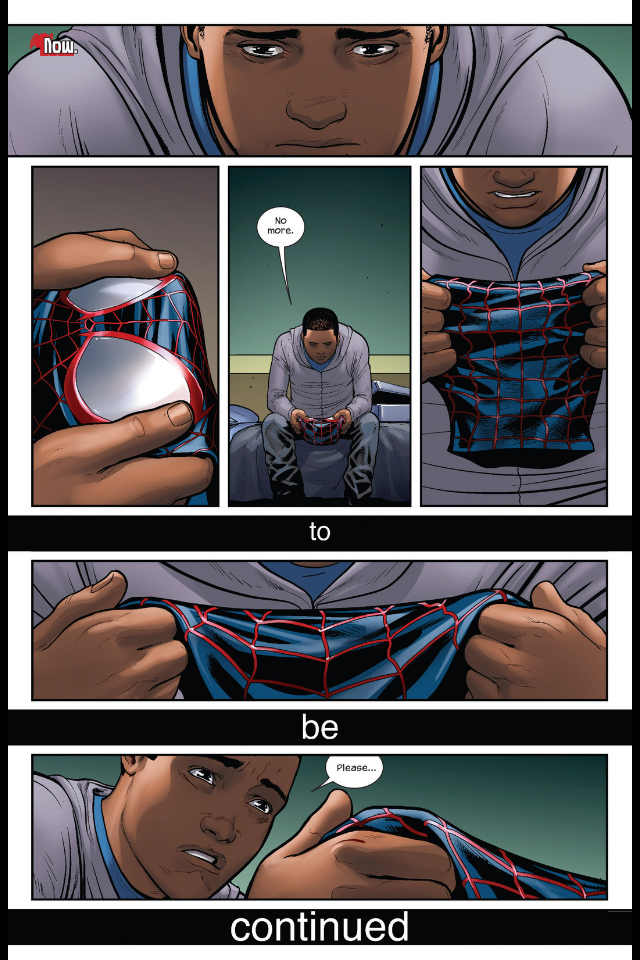 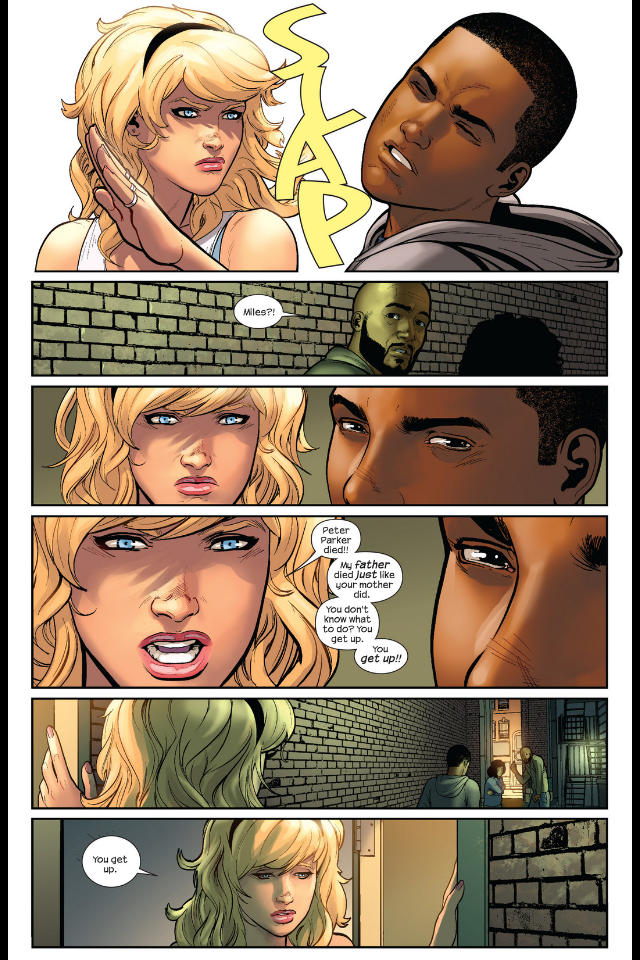 Man, Bendis really knows what he's doing here. The decision to jump ahead one year after the events of Venom War was great as it offers so much more weight to this storyline rather than saying that Miles quit for a couple of weeks. The death of a loved one can affect you in a myriad of different ways. When Peter Parker lost his Uncle Ben, it led him to become a costumed crime fighter. With Miles, his mother's death has had a very different effect on him.

Since she died after he'd become Spider-Man the crime fighter, rather than Spider-Man the wrestler in Peter's case, Miles believes that he isn't cut out to be Spider-Man since he couldn't save her, and also that his responsibility to his family trumps his responsibilities as Spidey. It's a nice touch as well to see him dodge around saying the word "Spider-Man" in the opening conversation, like the way Bruce Banner almost always calls the Hulk "the other guy" in Avengers Assemble.


What's also great is that Miles never feels unsympathetic in choosing to abandon being Spider-Man. The same can be said of the supporting cast. When Ganke and Gwen Stacy are mad at Miles, we understand why, and it makes the character dynamics so delightfully complex. No wonder Bendis wrote the Avengers for so long. Miles' relationship with his father has changed since the death of his mother, but in a much more subtle way than you'd expect, which is something I really appreciate. It's also interesting that Bendis might just be setting up a romance between Miles & Gwen. 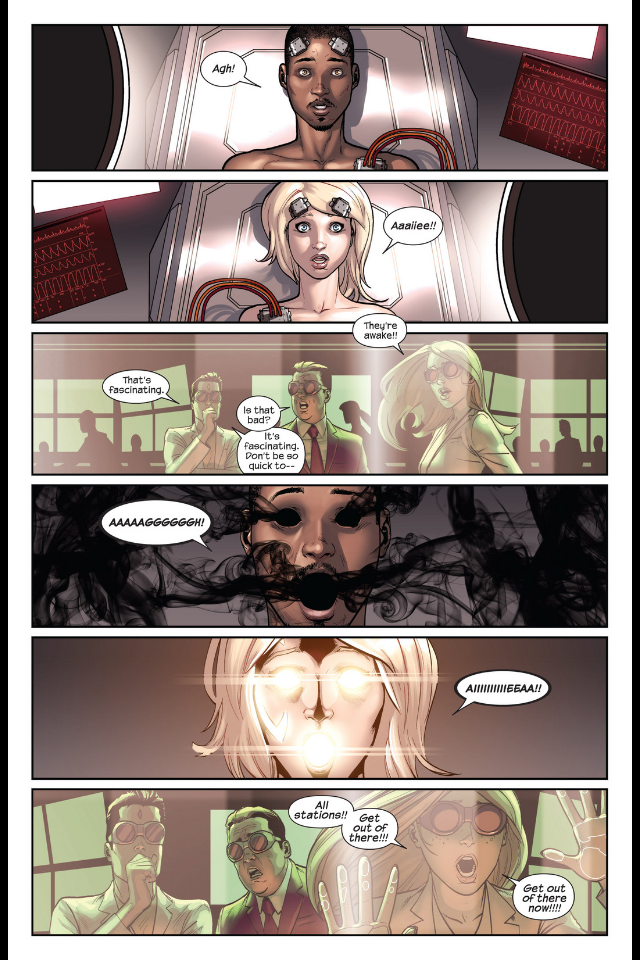 Cloak & Dagger are a nice addition to the Ultimate Universe and as far as I can tell, they don't seem all that different from their 616 counterparts. with the exception of some details being changed in their origin and Cloak being way more confident. In my opinion, that's a good decision from Bendis. We've already seen some radical re imaginings of characters such as the Scorpion, so going this route freshens up the formula and keeps us guessing about what treatment certain characters will get.
I REALLY like David Marquez as an artist. He's the right fit for this series and his work looks very polished and detailed. It actually reminds me of Mark Bagley's work on the series back when it starred Peter Parker. The new designs for Cloak & Dagger look pretty cool and fit in well with the Ultimate style. The same can be said of the Ultimate Spider-Man costume, even though we only see glimpses of it here.

Overall this series feels like a Spider-Man comic despite the different protagonist and that's certainly an accomplishment on Brian Michael Bendis' part, not to mention the fantastic artwork. Miles is more than a worthy successor for Peter Parker and after an extended origin, Bendis is taking the story in a very logical direction... 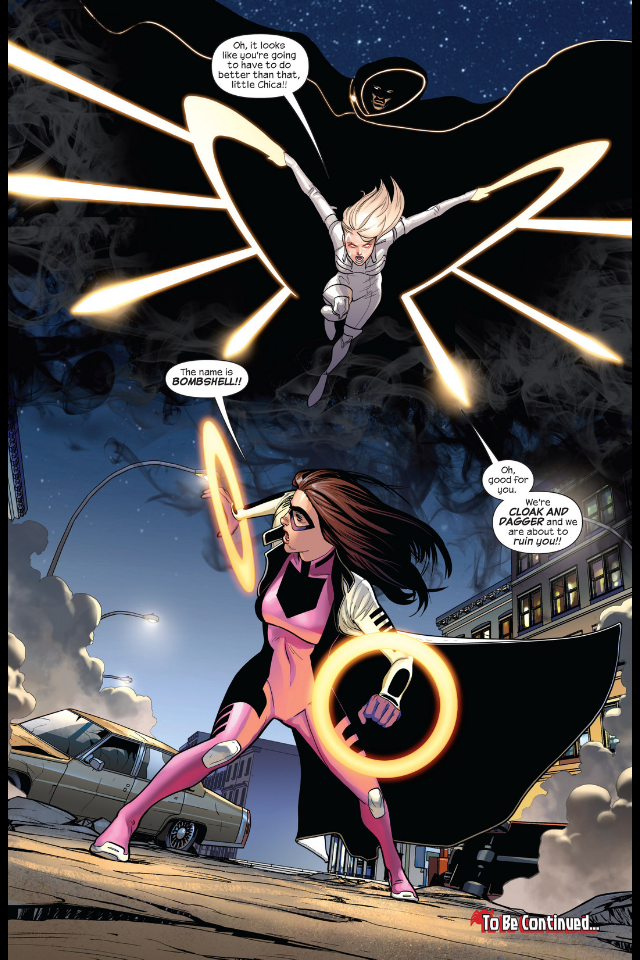