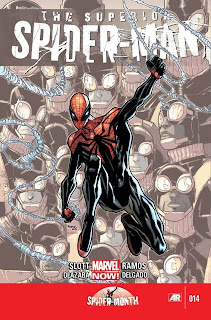 In this issue we see our Superior Spider-Man, take down the Kingpin and all of the Shadowland empire in one issue.

We also see Spider-Man, with a random army he somehow managed to recruit, sporting a new costume with even more tech, making him pretty much like Iron Man, only powerful even without his suit. Did I miss anything important in any of the new titles?

Anyhow, the start of this issue pretty much shows Spider-Man, in his new suit with his new army, attacking Shadowland. The Kingpin essentially realizes very soon that this is not the same Spider-Man he knows, even though the voice is the same.

He quickly devises an escape plan, or rather implements an escape plan he already had prepared in the even of such a situation. By his side is Hobgoblin aka Phil Urich.

I will have to mention that this issue is extremely fast paced and we see Kingpin's ninja die like fools from a 90's video game. Mid way through the issue we find out that Spider-Man had proceeded with the attack, without getting any approval from the Mayor. Unfortunately, although Jameson strongly disagrees with Spider-Man's actions, he can do nothing as he is blackmailed by Spider-Man. ( See Superior Spider-Man 13)

Coming back to the Kingpin, we see that Fisk had employed a double whose body had been modified to mimic his DNA. After killing his double and leaving his the body to be found, Fisk then leaves in his one-man sub, leaving Hobgoblin to die in the fire. Hobgoblin however, not being a fool, picks up on what Fisk is up to and makes a run for it before he is buried alive in the rubble of the falling building. Fisk trusts the new heartless Spider-Man to finish the job of disposing of the Hobgoblin for him.

When Hobgoblin gets out of the building he is greeted by a spider-bot. Hob-goblins prepares for an attack, but is surprised to see that the spider-bot did not sound an alarm and instead disengaged based on ' goblin protocol.' 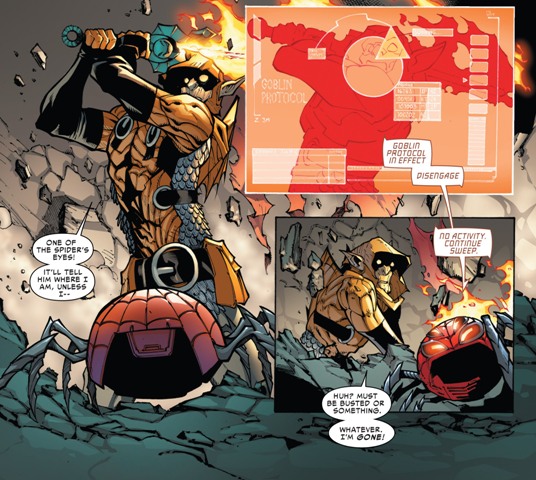 Later, after the celebration of the residents of Hell's Kitchen, we see new drug dealers in town, with goblin tattoos. Strangely enough, these guys do not sound the ever watching spider-bot's alarms either due to the 'goblin protocol.' 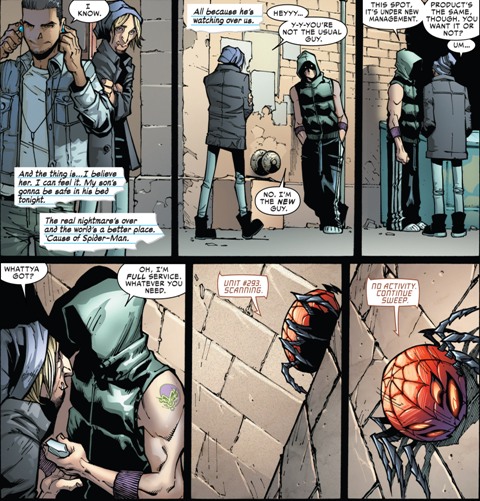 How ironic that by taking down one Kingpin, Spider-Man had actually created a new Kingpin, and a powerful one as well.

Though this issue moved a little too fast, it was great to see the Goblin King back in the story. From this issue we can tell that this new goblin, though may not be Norman Osborn, is quite a clever person as well. Being able to gather numbers under the sewers is one achievement, but to be doing it right under the watchful eye of the Superior Spider-Man and his little spider-bots is another.

It is quite likely that Norman could have something to do with this new Goblin since he has been missing for a while now. All possible theories aside however, the build up for this new Goblin King has been taking place for a number of issues now. I do hope that he is not taken down as quickly as Wilson Fisk when he finally does get discovered, or decides to show himself.

As for Spider-Man's new suit, I have to say that I actually like it. It's good to see some proper, noticeable differentiation between the Amazing Spider-Man and the Superior Spider-Man, other than the blue becoming black and some new lenses. 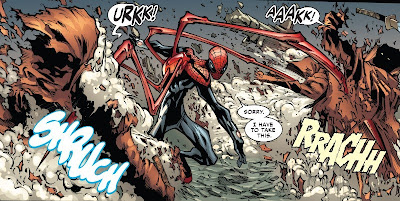