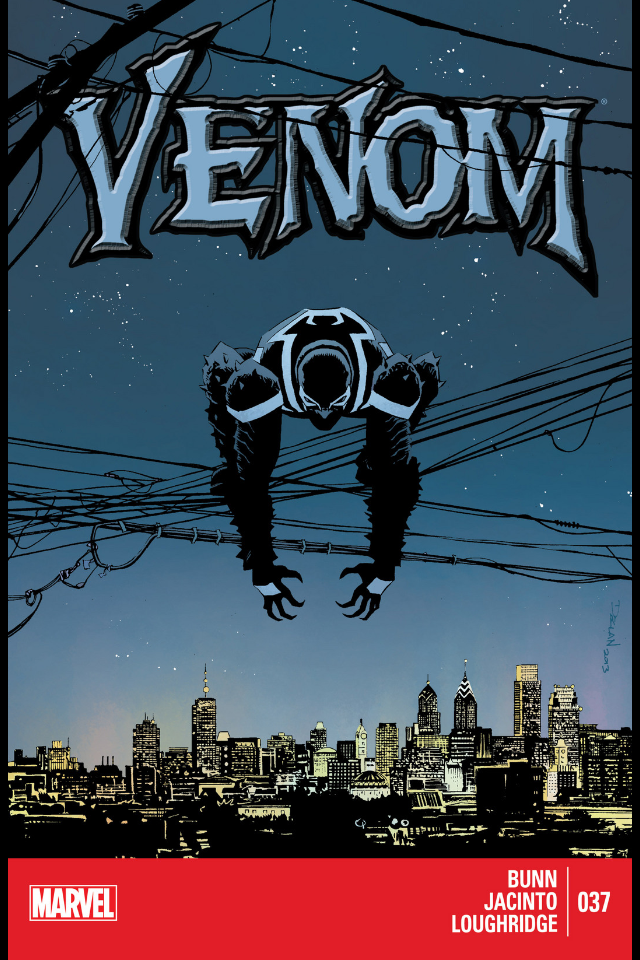 Hello everybody and welcome to my review of Venom #37.

At West Philadelphia High School, Daily Inquisitor reporter Katy Kiernan quizzes assistant coach Flash Thompson on the whereabouts of Agent Venom, since the Inquisitor is naturally very interested in the possibility of Venom setting up shop in Philly. She gives Flash her card and leaves, after which Andi arrives, having been eavesdropping. She asks if Katy is Flash's girlfriend. Flash lies to her and says that he doesn't know her at all.

Later on, in a vintage coin-op warehouse, Venom beats up some thugs (all the while cursing Kiernan for targeting him for her next expose). The warehouse is actually a front for one of Lord Ogre's drug labs, but to Venom, it's a nest of suffering. While knocking his way through the criminals, Venom is attacked by a trio of mercenaries dressed similarly to several superheroes like Spider-Man, Hawkeye & Captain America. 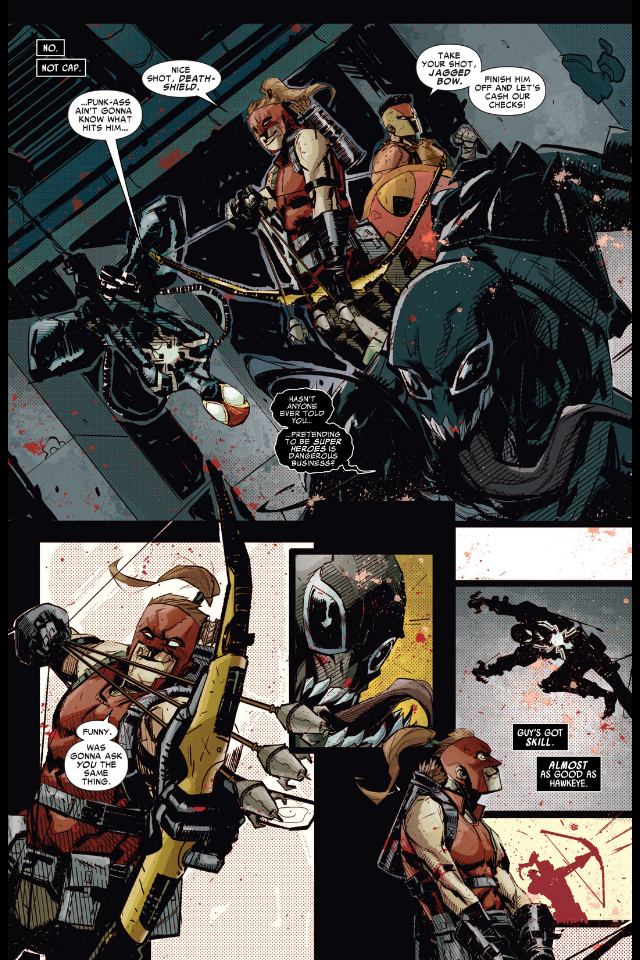 Venom struggles against the mercs at first, but quickly turns the tide. However he's suddenly incapacitated by the electric tentacles of the Constrictor, who, along with the silent assassin Lord Deathstrike, has joined the battle. Despite having Venom right where they want him, the greedy mercenaries start arguing over who will deliver him to Lord Ogre for a fat paycheck, with Lord Deathstrike eventually severing Constrictors tentacles, at which point the mercs begin fighting amongst themselves. Flash seizes the opportunity and retreats. He decides he needs better intel and contacts Kiernan, telling her they need to meet.

A short while later, Venom arrives at a parking lot where he meets Katy. He asks why she's snooping around Philly asking questions about him, since he thought they were "I dunno...friends?" Katy responds that they are, but her bosses are interested in what's happened there, asking Venom if he'd rather have a reporter snooping around who doesn't have any loyalty to him. Flash is surprised at this, but still gets back on track, saying he needs her help since he needs resources. Katy agrees.

Meanwhile, at Lord Ogre's penthouse, Ogre himself is giving a speech to the people gathered there, a collection of mercenaries and assassins. He says that by the time this hunt is over, Agent Venom will know what it is to be afraid. Just as he's finished, a late arrival makes his entrance, proclaiming to Ogre that he has an edge over "these other yahoos". It's Venom's old pal, Jack O'Lantern... 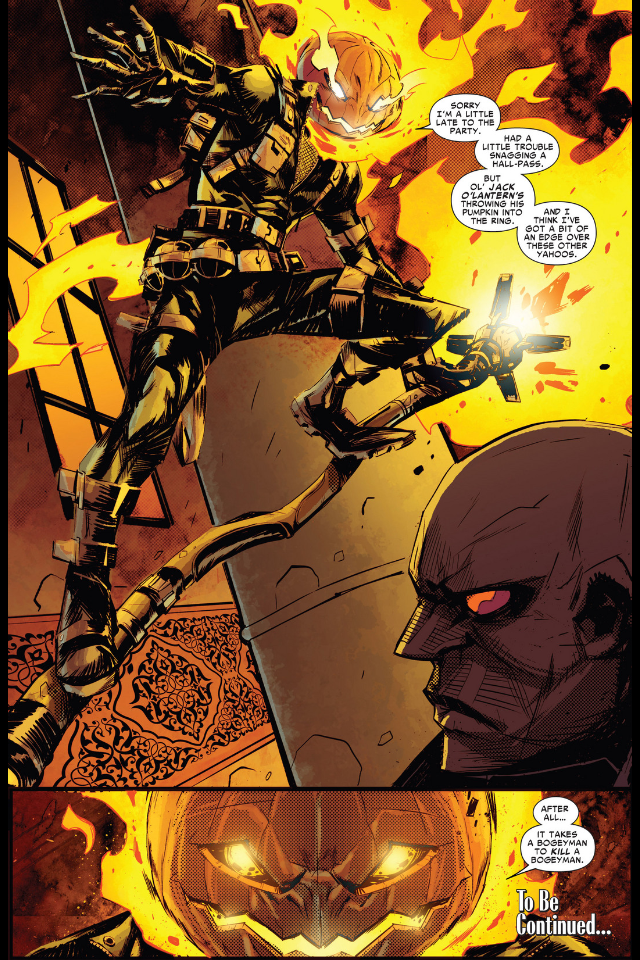 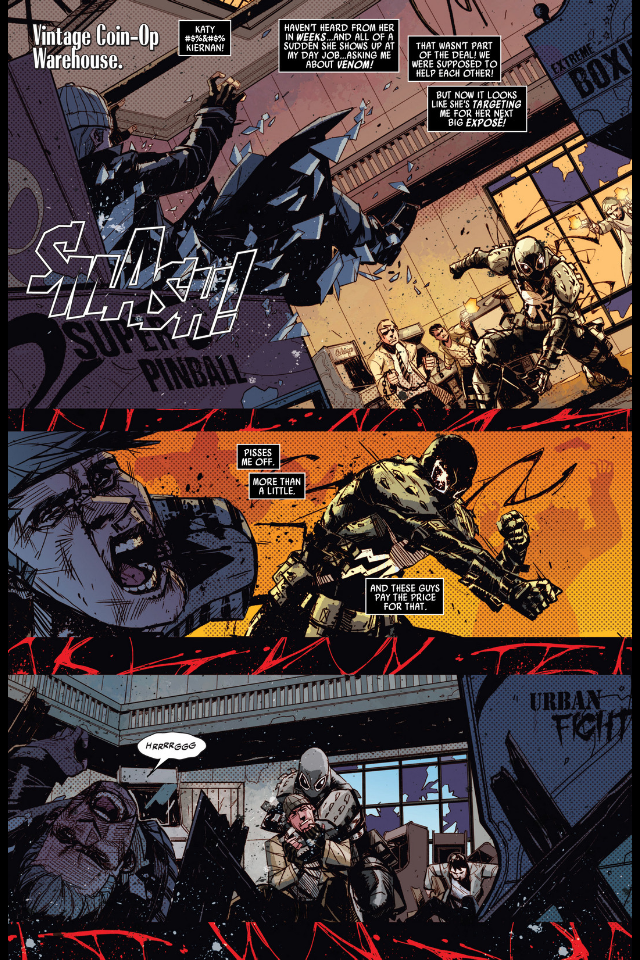 What impresses me about this issue is how natural the subject matter is. The last story arc was about Flash adapting to life in Philadelphia. This arc is about him properly establishing himself as a superhero in Philly and that looks to be very interesting. Personally, I'm hoping for a return of the Venom-Mobile!
Katy Kiernan actually makes a welcome return this time as I found her substansially less annoying than in her previous appearance. There's a confidence to her character now, and I'm no longer resisting the idea of her as Venom's love interest (because let's be honest, it's pretty obvious it's headed in that direction) since Cullen Bunn is clearly having a lot of fun writing these two together.

I like the idea of Lord Ogre putting a price on Venom's head. It allows for some pretty awesome action and shows LO to be more than just a generic brute. The knock-off mercenaries were both funny and deadly at the same time, but I appreciated the inclusion of established characters like Constrictor.

Kim Jacinto is the artist this time and the results are mixed. While the action scenes all look great & Jacinto draws a good Venom and a brilliant Jack O'Lantern, the human features look jagged and weird. Several characters have witch-like noses and Flash looks more like the Punisher than himself with his perpetually angry face in the opening scene.

Despite the mixed art, I really enjoyed this issue. The return of Jack O'Lantern looks to be very interesting and I'm holding out for Venom setting up his very own Bat-Cave...or Venom-Cave... 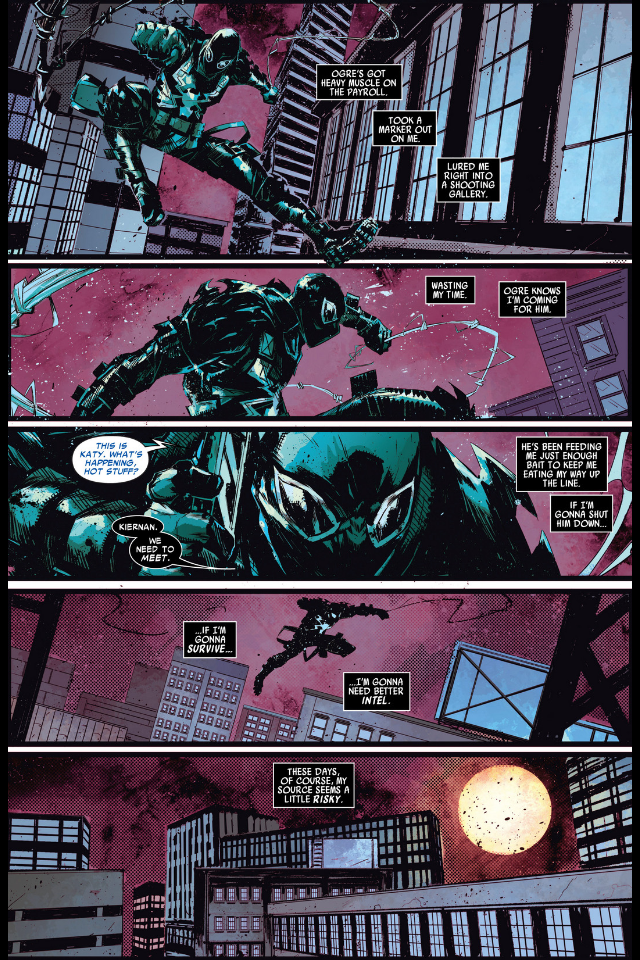