In this issue, we find out that Smythe, the Spider-Slayer is actually pretty smart, just one step behind Dr
Octopus. Read on to understand.

The issue begins with our Superior Spider-Man prepared to slay the Spider-Slayer. Smythe tells Spider-Man that all he wants is to get out of the Raft. Once he is out, he will give the order to Scorpion and the Vulture not to harm the civillians. Spider-Man however is not interested in the lives of the civilians. He is just doing what was ordered him by Mayor Jameson - to kill Smythe. 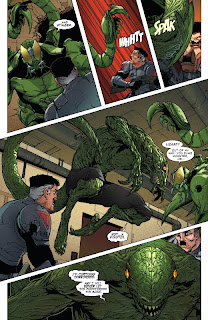 Meanwhile, the Vulture goes to find the civilians who are safe in Spider-Man's force shield. The Vulture however, with the help of Smythe's upgrades can see the weakest points of the force shield. ( not bad for a guy who was blind just one issue ago)

From inside, the civilians try to talk the Vulture into not hurting them. He is also told by Smythe's lawyer, who is also in the force shield, that he can provide legal assistance to wipe Vulture's name clean. Vulture pauses to think about it.

Elsewhere, Scorpion is hunting down Jameson. Just as Jameson is about to become meat on a stick, the Lizard aka Curt Connors comes to his rescue. The Lizard says that he is actually Connors in the Lizard's body. The two battle it out for a while until Spider-Man kills the Spider-Slayer.

Yes, Spider-Man kills the Spider-Slayer, stabbing him in the heart. At this point, all the upgrades on Boomerang, Vulture and Scorpion fall off, rendering them helpless. 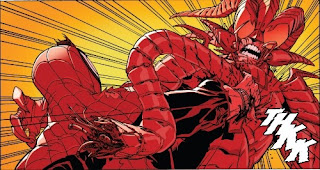 Everyone is soon out of the building and the Lizard, at his will is restrained. Suddenly, a dead Spider-Slayer comes back to life ( What?)

Apparently, Smythe's consciousness is still alive though his body is not. His consciousness will soon die, but he decides to kill as many as he can before he does. In the process the main prison guard dies, rendering anything I said about a story being built for him in my review for Superior Spider-Man 11 invalid.

Spider-Man takes Smythe away from the civilians. There, Smythe attempts to transfer his consciousness into Spider-Man, just like how Doc Ock did. ( This is happening way too often). Unfortunately for Smythe, the Superior Spider-Man has a metal helmet for the back half of his head on behind his mask. ( That has got to be heavy) And so, Smythe dies for good, without transferring his conscience to Spider-Man.

Spider-Man reveals to Smythe just before he died that he is actually Doc Octopus and that he had already planned everything Smythe had thought of. 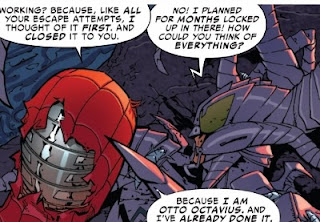 Later, minutes before Jameson's press conference, Spider-Man blackmails the Mayor with his recoding of Jameson's instruction to kill Smythe. Spider-Man asks Jameson to give him the raft to use for his own work - thus marking the beginning to Dr Octopus true plans of legacy.

This was actually quite a decent issue to be honest. We finally see Spider-Man aka Doctor Octopus, planning something Doctor Octopus-like. It was also great to see Doc Curt Connors finally come back out in the open about his mental state.

Probably one of the more disturbing things that took place in this issue is the fact that we saw two deaths in this issue. Then again, Superman murdered Zod in the latest Superman movie, so what's it to Spider-Ock to kill another villain.

So far Superior Spider-Man has really been changing the status quo for a number of characters. Scorpion no longer has a Jaw, Vulture is blind, Smythe is dead! Wow! Boomerang, I'm not too sure what is up with him. Where was he during the whole issue? We only see him get caught after he lost his powers upon Smythe's death.