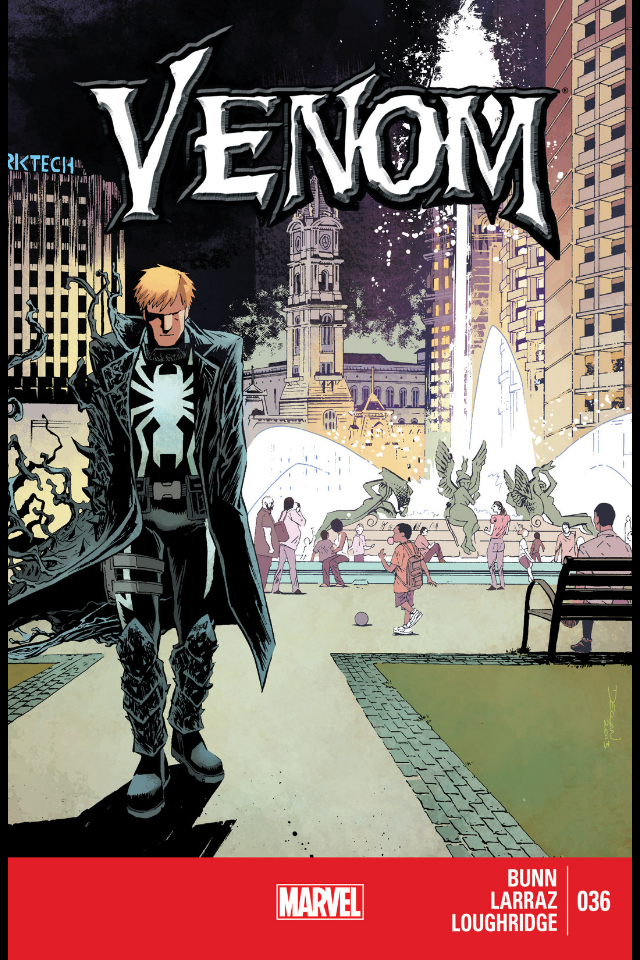 Hello everybody & welcome to my review of Venom #36. 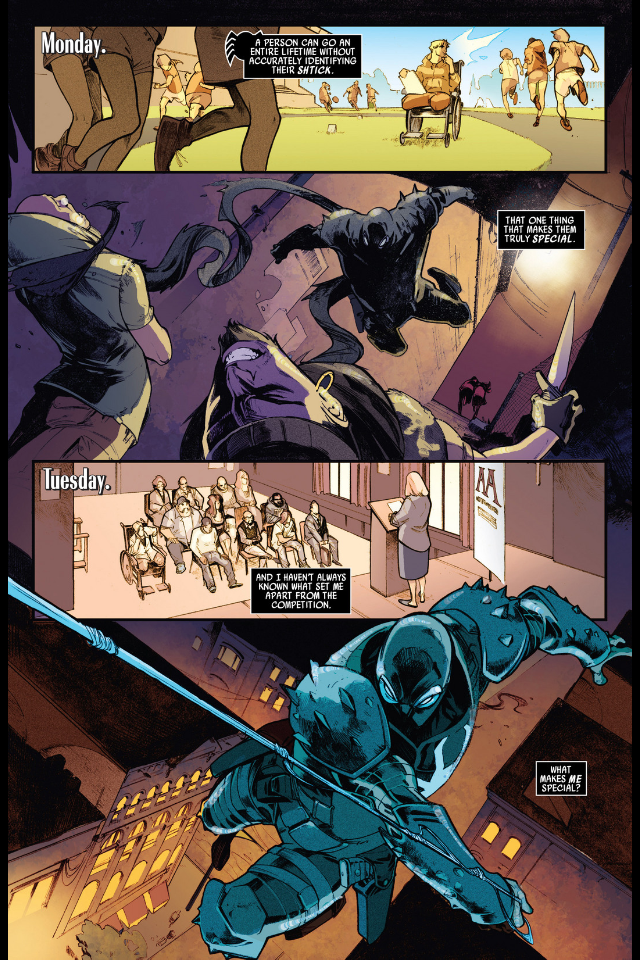 As we see Agent Venom going through the week from Monday to Sunday beating up bad guys, Flash Thompson narrates that people can go their whole lives without accurately identifying the "gimmick" that defines them. He states that it took a while and a few headaches too, but he finally figured out his gimmick. He overcomplicates things, which is why from now on, he's going to keep things simple.
The next day, while at school teaching P.E, Flash becomes frustrated with one of the jocks, Darius Fowler, who is behaving aggressively to the other pupils with the dodgeball. Since he reminds Flash of his younger self, Agent Venom decides to teach Fowler a lesson. Whilst everyone is preoccupied by Darius' bullying, Flash surreptitiously picks up the dodgeball and hurls it at the schmuck (with some added, unintentional Venom strength). The ball hits Darius right in the face, causing nearly the whole class to laugh at him. Flash thinks no one saw him at first, until he notices Andi smirking at him from the benches.

Later, Venom intercepts a van carrying what he assumes to be a shipment of drugs to Lord Ogre, a crime lord whose name has been popping up more and more in Venom's patrol's. Since he's still focusing on whether or nor Andi knows he's Venom, he loses his footing and falls off the van. Flash reminds himself that he can deal with that after he catches the bad guys...which would be great if they hadn't already gotten away. He then notices an out-of-service car and chuckles to himself. (To the Venom-Mobile!)

Meanwhile, the thugs in the van arrive at their headquarters, only for a symbiote-possessed car to hurtle through the wall. Venom leaps from the car and quickly works his way through the henchman, leaving all but one unconscious for him to interrogate about Lord Ogre's location. This proves unnecessary however as Lord Ogre shows his face there and then, flanked by several more thugs and a pair of attack dogs on a leash. After some contemptuous banter between them, Lord Ogre sics the dogs on Venom and the henchmen he was interrogating. (Hmm, I wonder which one of them will survive.)

After dealing with the dogs, Flash turns to face Lord Ogre and his posse, only to see that they used the opportunity to make a quick getaway. As he leaves to pursue them, he hears a thumping sound from the nearby van. Assuming it's just some dumb henchmen desperate to protect their supply chain, Flash pries open the doors. The sight he's greeted with is certainly not what he expected... 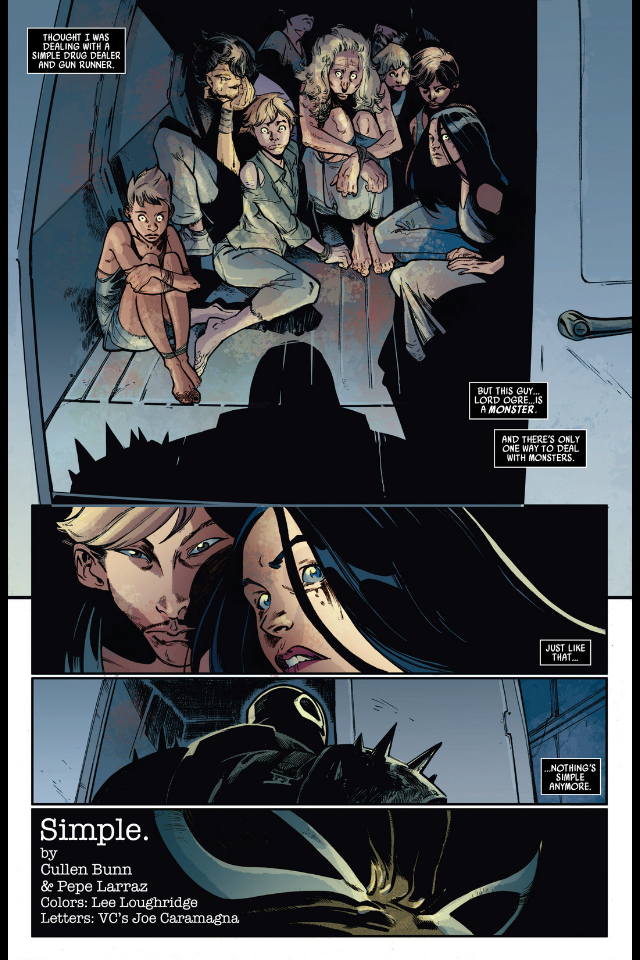 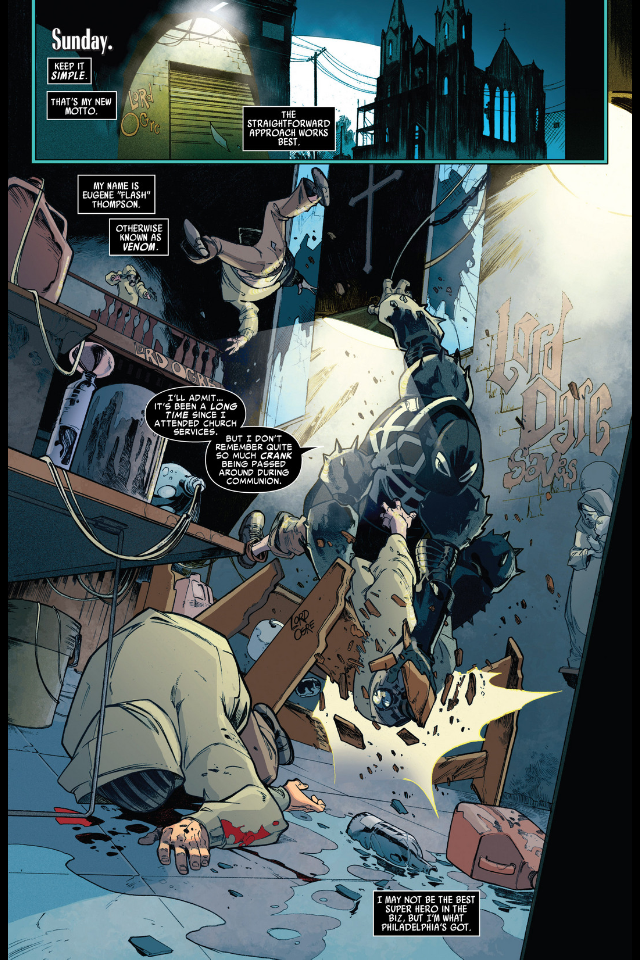 This is an interesting issue of Venom. Despite setting up plot points that will be picked up in the next
couple of issues, this is presented as a standalone tale for Flash Thompson, who gets a very nice mini-arc in this instalment.

The villain, Lord Ogre is kind of generic in his personality and appearance, but I think that's intentional, since Venom doesn't take him seriously and sees him as a lesser foe than the ones he's faced before. The reveal that he's involved in human trafficking is a good twist as it shows that he's most certainly a monster.

Flash continues to be the best thing about this series. The scene where he tells of what he would do if he could confront the younger version of himself is so indicative of how far he's come thanks to this series and he's all the more sympathetic for it. The arc Venom goes through feels natural and satisfying by the end, because Flash has that realisation that the world is always going to be complicated, and the best thing he can do is to accept it.

For this issue, the pencils are by Pepe Larraz. His work is quite different from Declan Shalvey's so I found it a but jarring at first, but I quickly grew to like Larraz's style. A few panels of Venom's face even reminded me a bit of Todd McFarlane's Spawn, but then again there's been a lot more similarities with that character anyway since Flash became Venom.

After the long story arc with Toxin, this issue feels like a breath of fresh air. I'm really pleased with where Cullen Bunn has and looks to be taking Flash as a character. The action is great (in case you hadn't already figured it out, I LOVE the Venom-Mobile) and Lord Ogre looks to be an irritating thorn in Venom's side. Let's just hope Flash has a big enough pair of tweezers... 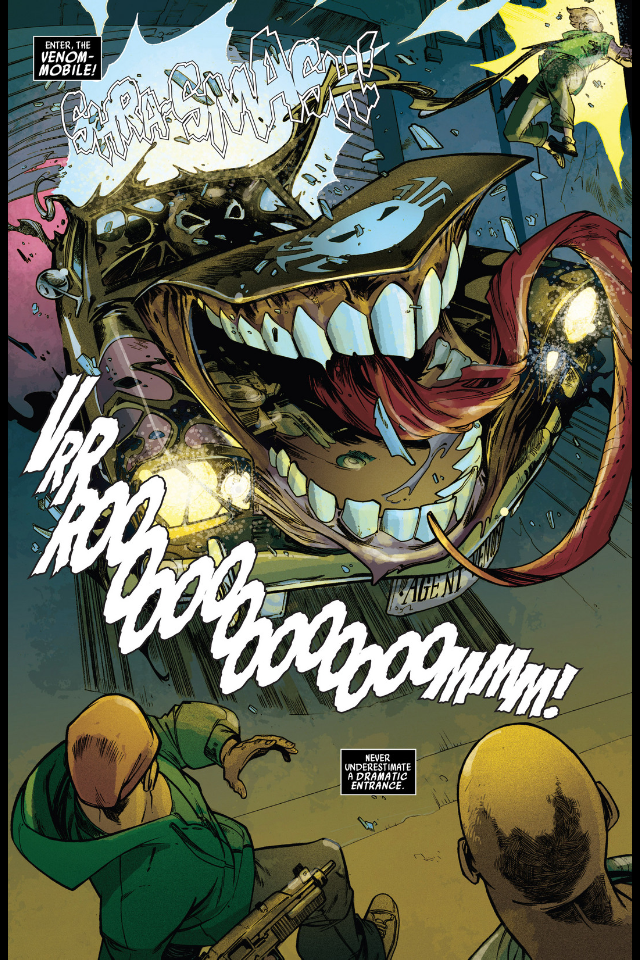