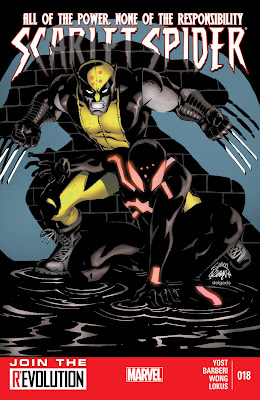 So, last issue, Kaine managed to do what only a few handful of people have managed to do in the entire history of the Marvel Universe--he killed Wolverine.  Yep, Wolverine is dead.  Dead, dead, dead.  All because Kaine managed to get in a once in a lifetime lucky stab right between one of Logan’s adamantium-laced ribs directly into his heart.  So yes, no joke, Wolverine is dead.  For real.  Of course, if any you seriously think that this is actually going to stick, then…well, let’s look into part 2 of “Wrath” and see for sure, shall we?

We open right where the last issue left off, as the sniper who has kept watch on Kaine reports to Belladonna that Wolverine is dead, and, based on the reactions from the other X-Men, Kaine is “about to join him.”  Belladonna then tells the sniper to report back to the Assassin’s Guild to collect payment. 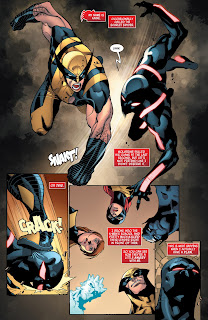 Meanwhile, Kaine is still waiting for the other X-Men to attack when Storm uses her powers to hurl him against the wall and choke off his air supply, while Iceman uses his powers to drop the temperature of Aracely/Hummingbird’s brain, making it so she can use her telepathy.  Young Jean Grey, however, tells them to stop as the assassin is gone, and Beast says he can hear Wolverine’s muscles re-knitting together.  However, when Wolverine’s heart doesn’t start, Beast slams his fists on Wolverine’s chest and he instantly comes too, ready to kill Kaine.  However, Wolverine retracts his claws right as he punches Kaine in the face and then stamps him to the ground with his foot.  Kaine, via, his narration, doesn’t blame Wolverine or the X-Men for being angry one bit--and that apparently this was Kaine’s plan all along.

Later, we see Wolverine putting on the black-ops “Uncanny X-Force” costume, telling Storm he’s going with Kaine and will be back in 24 hours.  We also learn, via flashback, that Wolverine was told to play along with Kaine “assassinating” him from Jean, as Hummingbird told her they were being watched by the member of the Assassin’s Guild.  Wolverine also tells Storm to look after Hummingbird, much to Storm’s reluctance.  That because none of the telepaths want to go near her, and Storm finds Aracely unnerving…and extremely annoying (ha!)

We then cut to New Oreleans, where Belladona, Smithy, and another Assassin’s Guild member, hold one Mr. Murray at gunpoint.  Belladonna states that Murray must die because it’s their client’s wish and thus they execute him.  When Belladona is asked by the gunman how much longer these “sacrifices” must go on, Belladonna reminds him that they are killers, that this is their penance for their past sins, and that “blood demands blood.”

On the Blackbird, Kaine explains to Wolverine how the Assassin’s Guild were going to kill his friends unless he killed Wolverine, and he figured that if Belladonna hated Wolverine so much that she wanted him dead, then Wolverine must hate her just as much.  Hence Kaine’s plan to pretend to accept Belladonna’s deal so he could get Wolverine’s help.  And if Wolverine didn’t manage to survive, then either way, Kaine’s problem would be solved.  Wolverine agrees to help, but says that after this, he wants to see neither Kaine or Hummingbird again, and if he does see Kaine, he’s dead.  Kaine says it’s a deal.

Back at the Jean Grey School for Higher Learning, Aracely is being examined by Beast, the younger Hank McCoy, and Dr. Cecilia Reyes, while Aracely asks lots and lots of questions.  The scans show that, in spite of her abilities, her DNA reads human, meaning she shouldn't be able to have powers at all.  Furthermore, while they realize Aracely is “not evil,” she is not the only person inhabiting her body.

We cut back to New Oreleans, where both Kaine and Wolverine stealthily take out various Assassin Guild members as they gradually make their way through the compound.  However, the Assassin Guild gets alerted to their presence, leading Kaine and Wolverine having to take on multiple guards.  Kaine thinks about how, due to not having a spider-sense, he’s merely avoiding getting killed via speed and luck, but notes how all the “old ways” of killing are coming back, and that the “monster” inside him is as happy as he is. 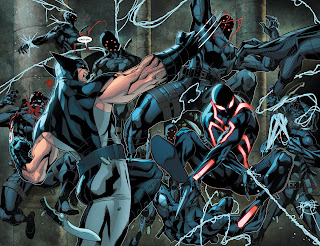 At that moment, the Assassin’s Guild member, Harvest, attacks, wanting revenge for Kaine having cut off his leg the last time they fought.  Wolverine leaps in to help, but gets by Smithy.  Then Kaine gets attacked by the little girl assassin, Flower, breaking one of Kaine’s ribs.  Smithy is about to shoot Wolverine in his eye-socket with an explosive round, believing even his healing factor won’t allow him to survive that, when Kaine pulls Wolverine away at the last moment with his webbing.  Wolverine then makes quick work of both Harvest and Flower when he gets blasted in the back by Belladonna, telling Kaine he shouldn’t have betrayed the Assassin’s Guild.

Kaine uses his webbing to pull down two pillars, taking out two more guards, while Belladonna orders the others to kill him and Wolverine.  Belladonna also says that if Kaine and Wolverine don’t die, then the Red Death will kill them all.  However, while Wolverine distracts her, Kaine, using his stealth mode, grabs Belladonna and hold her at the point of his stinger.

Kaine tells the Assassin Guild soldiers to drop their weapons or he’ll kill Belladonna, Smithy tells Kaine to let Belladonna go when suddenly he's stabbed by a series of spikes.  Belladonna says that “she’s here” and Kaine and Wolverine are picked up by what appears to be hair-like threads.  We then see Kaine and Wolverine held by a blond woman dressed in red and with yellow eyes, as Belladonna shouts “The Red Death has come for you all!”  And Kaine thinks that maybe killing Wolverine might have been the better way to go.  To be concluded… 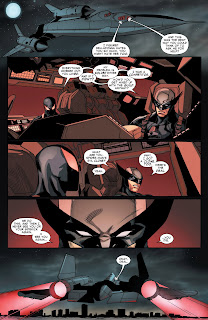 Stories involving team-ups tend to lead to mixed results.  On the upside, you get to see two characters who otherwise wouldn’t interact with each other on a regular basis play off each other, often leading to some very entertaining character dynamics.  On the downside, depending on the character, one-half of the team-up tends to dominate the other in terms of their presence, and the one who comes off as being less dominant also happens to be the titular character of a comic book series, they can often feel like a guest-star within their own book.

Thankfully, even though Wolverine gets a lot of attention in this issue, Chris Yost doesn’t forget that this is still the Scarlet Spider’s story guest-staring Wolverine and not the other way around.  Also, not only do Kaine and Logan, as I mentioned in the last review, have a lot of similarities, they also wind up having some great chemistry, complete with some great banter between them.  For instance, when Kaine affirms that he's “Spider-Man’s evil clone,” Logan gives a dismissive “Pfft. I got a clone, too.”  Or when Logan asks Kaine what his plan is when cornered by Belladonna, Kaine suggests that Logan can distract her by allowing her to kill him so Kaine can escape.  In short, Yost uses the past  Spider-Man and Wolverine team-ups and, no pun intended, gives it a sharper edge in keeping with Kaine’s personality.  They may not want to admit it, but Kaine and Logan really are two of a kind who just also happen to kick a lot of butt.

Regarding the other two principal characters, however, it’s a little more mixed.  Aracely is great as always, and I loved the scene where she’s undergoing tests and getting under all the X-Men’s nerves, not to mention learning the apparently true source of her powers.  However, Belladonna doesn’t seem to carry much weight in spite of being the story’s main antagonist and having a history with both Kaine and the X-Men (Belladonna is Gambit’s ex-wife, after all).  Also, the explanation that the Assassin’s Guild does what they do to appease some mystical being is not exactly the most original of motivations.

I also really liked both Carlo Barberi and Ale Garza’s art in this issue despite their obviously different styles.  Of particular note is Barberi’s two-page spread of Kaine and Wolverine dispatching various Assassin’s Guild members, which is even more impressive when you realize that every character in those pages are all wearing dark clothing, in a night scene, and yet you can still clearly identify each person in that scene.  My problem is that I wish the issue stuck to one artist, as it’s rather jarring to see Garza’s more manga-inspired illustrations suddenly take over in the last couple of pages, and in the middle of a fight sequence to boot.

All in all, so far this is proving to be a good team-up story that, while not exactly deep, is definitely a lot of fun, and I’m looking forward to see how the next issue wraps it all up.
Read More
Newer Posts Older Posts Home