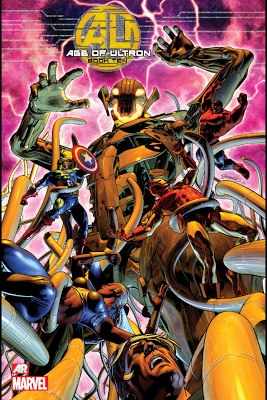 Hello everybody & welcome to my review of the final installment in the Age of Ultron series, #10. It's all been building up to this, the final showdown with Ultron. Can Hank Pym & his fellow Avengers defeat the android and save the timeline? Let's find out...

Several months before the genesis of the Age of Ultron, Hank Pym is working in his laboratory in New York. He suddenly receives a cryptic message on his computer monitor telling him to open his door. Assuming it's Janet Van Dyne/The Wasp pulling a joke, he opens his door to find a package sitting on the floor outside. Pym opens the package to find a tablet device that automatically begins to play. On the screen is a younger version of Pym who tells his older self that he won't remember making this video because it was important he not know anything about what he's about to tell himself until today (Okay?).

The younger Pym starts telling present day Pym what it going to happen, recounting the events of #12.1 of Avengers by Brian Michael Bendis (In which the supervillain group known as the Intelligencia had kidnapped Spider-Woman, leading the main team of Avengers, as well as the New & Secret Avengers to launch a rescue mission, only to discover that the group has recovered and reactivated a "Spaceknight" that turned out to be Ultron). Pym contacts Iron Man just as Ultron begins to reactivate, sending him a code that is very specific to a backdoor code portal program built into Ultron (O...kay?). 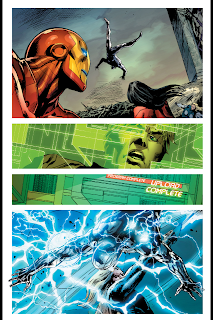 Shellhead launches the code just as Ultron is about to escape, which prevents him from doing so. "This is incorrect" Ultron squawks (he must have read #12.1). Tony instructs the Avengers to hold the android down whilst the code is loading. Ultron fights back and correctly guesses that his "father" has a hand in this code. He speaks directly to his father, saying that he is decoding the code as Pym uploads it and that he is angered and insulted by it. He throws the Avengers aside as if they are rag doll and proclaims that he knows now that it is time to put the human race out of their misery. He declares his hatred of his "father", unaware that the code has finished uploading. Ultron deactivates and falls to the ground, being greeted by an angry Thor who well and truly smites the crap out of him!
Pym explains to Stark that they sent Ultron what looked like an average backdoor Trojan horse code, but the trick was that when Ultron tried to defend himself and re-code the program, it unlocked a self-replicating virus that was implanted in Ultron during his very creation. There was nothing left of Ultron by the time he was able to process what was happening. Tony asks how Hank could possibly know what was going to happen.

Meanwhile, AU Wolverine & Invisible Woman return to present day New York, which is now completely fine. After landing the hovercar (where the hell did they get that one from?) Wolvie tells IW to go home and hug those kids of hers. Susan smiles and hugs Wolverine first, saying that she's taken back almost everything she said about him. As Wolverine remarks that he's going to sleep for a millennium, cracks appear in the panel and on the next page, the timeline appears to literally shatter before our eyes! (we catch a glimpse of Spider-Man 2099 among the many different characters shown in that sequence) 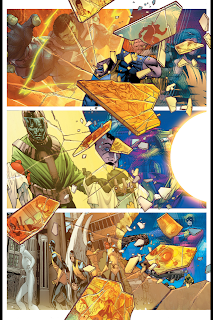 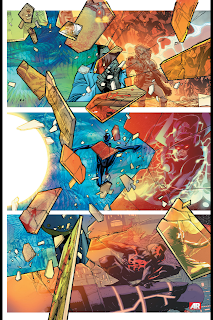 However, everything suddenly snaps back to normal with seemingly no ill effects. On board an Avengers space station, Henry Pym theorises aloud to Tony Stark and Hank McCoy that, in his repeated attempts to defeat Ultron, Wolverine abused and broke the time-space continuum. They are all lucky to still exist in a cohesive, linear reality. Beast wonders why, since they've travelled in time before without damaging the timeline. Pym answers that this time it may have been one time too many. Tony points out that they are teetering on multiversal chaos and the cracks could even reach out to other universes.

Case in point, we cut to the Ultimate Universe and Mile Morales, the Spider-Man of that universe, webslinging through New York, thinking he might have finally gotten the hang of "the Spider-Man thing". All of a sudden a crack appears in the sky, catching Miles by surprise and causing him to let go of his webline and land rather ungracefully on a rooftop, as Miles picks himself up of the ground, he witnesses the coming of Galactus to the Ultimate Universe. 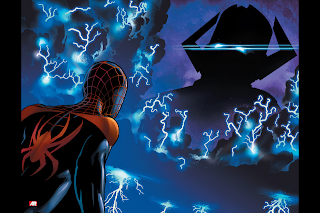 Back in the 616 universe, Pym is telling Stark that he can't stop thinking about how the point of Ultron was to build a technology that would support humanity's thoughts and imaginations. He suddenly realises his mistake and says that he knows what he has to do.

In space, not too far away from Earth, another rupture appears, carrying an unexpected figure into that universe. She doesn't know how she got here or who is responsible, but she does know that she is an Angel of the Heavens and she will not be disrespected. She issues a warning to the person who brought her here against her will, "My name is Angela, I'm coming to end you." (Watch out Wolverine!)... 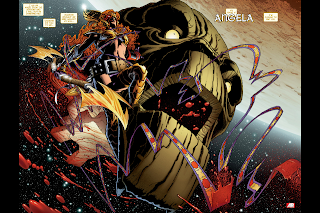 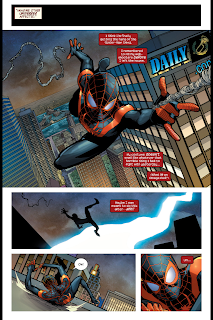 Okay, now before I get into any of the new storylines this ending sets up, I'm going to talk about the actual conclusion of the Age of Ultron storyline. The end fight with Ultron is handled very well by Bendis, even if it means that for the second time in a row, we have an issue cover that is false advertising. Going all the way back to the first Point One Avengers issue that Bendis wrote was very clever, and it gave that issue all the more relevance. The fight itself looked very cool and I'm especially pleased that in the end, it was Hank Pym who defeated Ultron since these two characters have been largely underused in this event.
Everything that comes afterwards in the epilogue however, is rushed faster than Sonic the Hedgehog on Red Bull! There's no time to see the fallout of this event for all of the characters, and Marvel shouldn't just assume that everyone is going to pick up the A.I issue starring Hank Pym (even if it is written by the awesome Mark Waid). The scene where AU Wolverine & Invisible Woman return to the present day Marvel U had me scratching my head. Isn't the current Sue Storm travelling through dimensions with the rest of the Fantastic Four (and the tie-in issue showed that AU occurred after the beginning of Fraction's Fantastic Four, so there's no excuse there.)? Shouldn't these two be wiped from existence since the timeline's back to normal? Are they separate entities from the current Wolverine & Invisible Woman? And if they are the current versions of both characters, shouldn't they have snapped back to wherever they were in the present day? Yeah, forget head scratching. Now I've got a headache!


There's also a number of plot holes that this issue opens up with previous installments. For example, what was the point of focusing half of #6 on the AU heroes going to the future future (Headache Level 2) if they were just going to become irrelevant by the stories end? We could have skipped what happened with them and focused more on the epilogue of this storyline!

On a more positive note, the timestream being broken by Wolverine is very interesting. Besides the maddening couple of pages where we see it shatter before our eyes, I'm very interested to see where Marvel are going to take this in their future events, such as the soon-to-debut Infinity, and how this will impact on the characters directly involved in this.

Now let's talk about all the incredibly awesome things this issue sets up in its last few pages. First off was a sequence featuring Ultimate Spider-Man himself, Miles Morales, coming face to face with Galactus from the 616 Universe. I was very pleased to see Miles make a surprise appearance, for one thing it made me feel a lot more justified in reviewing this series on here, since there's been a major lack of anything Spider-Man since the sixth issue. It will certainly be interesting to see the usually gritty and realistic Ultimate Universe face off against the classic version of Galactus and hopefully the creative team behind the series (Hunger) will deliver a gripping story. 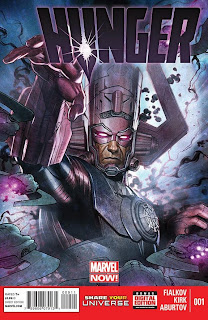 Next is a teaser for the new Avengers title, Avengers A.I, which stars Hank Pym. Compared with Hunger's teaser, this one is subtle and more mysterious. It's also one of the casualties of this issue's rushed nature as it was over so fast I barely had time to register it. I'm still on the fence about whether or not I'm interested in this Avengers spin-off since I'd rather just have Pym join up with one the other four Avengers team rather than create his own, but for all I know, this could turn out to be something quite special. 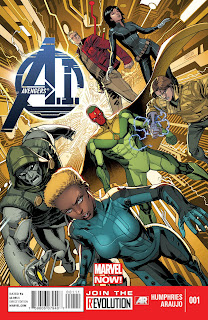 Finally there was the reveal of Spawn character Angela being pulled into the Marvel U. While it's not exactly surprising given that her joining the Marvel U was announced a couple of months ago, it was still awesome to see this character, Bendis provides her with some great dialogue and from the sound of things, she might be the same Angela from the Spawn comics, rather than a new incarnation of the character. I'm really excited for her next appearance in #5 of Bendis' Guardians of the Galaxy (which will be co-written by Neil Gaiman!) and see her interact with the stalwart characters of Marvel, particularly Wolverine. 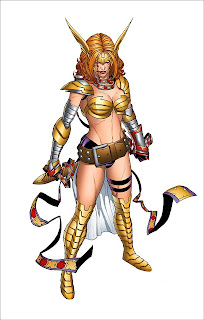 There's a variety of artwork on display in this issue. We have the likes of Joe Quesada, David Marquez & Alex Maleev, as well as series regulars Brandon Peterson & Carlos Pacheco. Bryan Hitch is credited due to this issue reusing his work on #12.1 of Bendis' Avengers. Everyone acquits themselves very well here, but my personal favourite would be Quesada's rendition of Angela. It looks fantastic and it makes me wish that Quesada would do more interior work as he certainly hasn't lost his touch. Marquez is a close runner up though, the brief shots of Miles web-slinging and the money shot of Galactus in shadow is brilliantly polished and dynamic.

Finally I'm going to talk about my opinion of the series as a whole. As a story, this series is far from perfect. It's left full of plot holes by this final issue and considering Ultron's name was in the title, it was really disappointing that he and Pym didn't play a larger role in the story until the very end. I did enjoy the arc Wolverine went through and the consequences that came out of it and there was some mostly fantastic artwork on display. Overall while it doesn't match Avengers VS X-Men when it comes to quality of storytelling, Age of Ultron is still entertaining enough to deserve a read. I just wish Bendis had given it a more appropriate title, like Timestream or something... 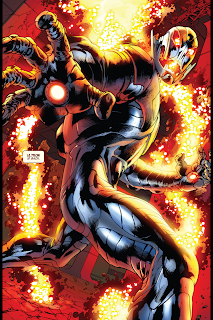