This was an issue to showcase Mayor Jameson's hate toward the Spider-Slayer for killing his wife. While I have not read all the Spider-Man issues, I have never seen Jameson this bad ass before!

This issue begins with Jameson, recalling the events that took place just before his wife was killed. He fumes with hate as he thinks about it. Just then, Spider-Man's bugs come into the room where Jameson and the other are. A tiny hologram of Spider-Man is projected informing them that in order to prevent the likely chance of them being captured as hostages by the Spider-Slayer, the spiderbots will create a force-shield around them. They are then instructed to stand within a circle created by the spiderbots.

Jameson refuses however as he wants to see Smythe dead, preferably by his own hand. 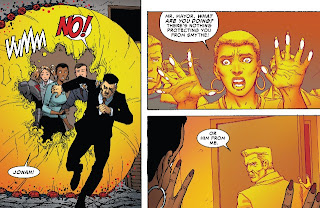 Meanwhile, in another room, Spider-Man and the Spider-Slayer battle it out, throwing both punches and demeaning comments to one another. Just as Smythe is seemingly winning the battle, Jameson appears fully clad in a bodyguard's costumed armor and fires a shot at Smythe, who then flees the scene.

Spider-Man tells Jameson that he cannot both fight the Spider-Slayer and protect Jameson at the same time. Jameson then instructs Spider-Man to ensure that Smythe is executed as planned. Spider-Man, asks Jameson a second time if that is what he wants. The Mayor seconds his previous statement, and it is recorded by one of Spider-Man's spiderbots. 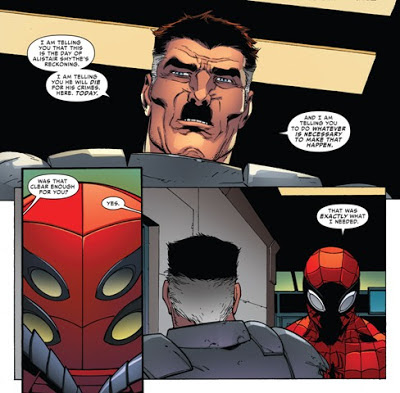 Spider-Man then leaves to find Smythe whom he predicted correctly would be trying to turn off the power. Smythe successfully turns off the power. On his way there, he is greeted by the new improved Scorpion, Boomerang, and the Vulture, fully equipped with Smythe's upgrades.

With the power off, the Lizard, who is actually Curt Connors now, stuck in the Lizard's body makes an escape. Unfortunately for Smythe however, he is not able to escape as he planned due to Spider-Man forseeing a power outage. In no time, the backup generators kick into action.

With no other choice, the Spider-Slayer resorts to battling it out with Spider-Man once and for all, while sending Scorpion, Vulture, and Boomerang to kill all the protected hostages, and Jameson in the process.

Vulture leaves to kill the hostages while Boomerang stays back to kill Spider-Man. Boomerang unfortunately does not last two panels and it is possible that he was killed there and then.

The Spider-Slayer taunts Spider-Man telling him that he has to choose between the hostages and Jameson. Spider-Man however chooses none of the above as his new objective, as instructed by Jameson is to kill Smythe! 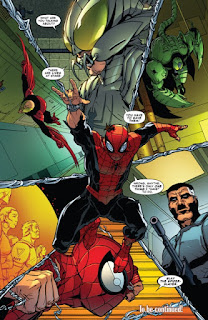 Thoughts
In this issue we see that the Spider-Man Smythe is now dealing with is very different from the real Spider-Man. His old hostage tricks are not going to work as well as before. Spider-Ock is a very different type of Spider-Man in a sense that he only does what is required of him.

The fact that he recorded his conversation with the Mayor proved that he was making sure he was going to get away clean if things ended up getting dirty. He also made sure that Jameson knew he was not going to come back to save him if it gets in the way of his new duty.

Mayor Jameson on the other hand is no longer the coward he usually is. In this issue he seems to have no fear for his own safety. He has become exactly what his wife told him not to be - obsessed with revenge over her death, filled with hate.

The artist portrays Jameson's feelings of hate and vengeance very well through the art. We see Jameson holding a serious warrior stance, almost storm trooper like is several panels. This is no weak Mayor, instead it is a killing machine who would do some serious damage if he had powers.

As for Curt Connors, I have no clue what to say about his escape except that there is probably a good story in the making involving him very soon.