The Punisher comes face to face with the Superior Spider-Man! 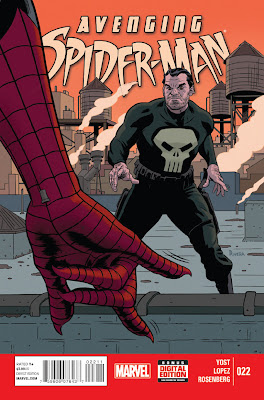 When one of Spider-Man's spider-bots spots a bank being robbed he heads over to investigate, only to find that the bank is being robbed by Mysterio.  But something is a miss; Mysterio is calling himself "Mysterion" and is choking on his own smoke, making it clear that this is not Quentin Beck.  Spider-Man chases Mysterion to the bank's roof, where he then interrogates him on why he is using Mysterio's costume and tech.  They are soon interrupted by a bullet from the Punisher, which manages to shatter Mysterion's helmet, revealing the scared face underneath.  As Mysterion makes a run for it, Spider-Man attacks the Punisher, who is able to temporarily blind the webslinger by detonating some flash grenades.  The Punisher tells Spider-Man that he heard what happened to Massacre, and warns him that the path he's currently on will consume him.

Spider-Man chooses the latter and is able to save Mysterion by taking down the Punisher.  Spider-Man warns the Punisher not to get in his way again or he'll kill him.  Later in his war journal, the Punisher expresses his approval on Spider-Man's new outlook on crime.  In his underwater lair, Spider-Man looks over the newly captured Mysterion as well as Sandman, Electro and the Chameleon.  Spidey decides that it's time to take his war on crime to the next level.

With this being the last issue of Avenging Spider-Man, it was sad to see Chris Yost end the series on a bit of a disappointing note.  It's not entirely Yost's fault; Mysterio was given to the Ultimate Universe at the end of Spider-Men, hence Yost's need to create a lame stand-in.  Being a Mysterio fan, I'm disappointed that he likely won't be coming face-to-face with the Superior Spider-Man any time soon.  Hobgoblin's appearance was also underwhelming.  The idea of having Otto Octavius matching wits with Roderick Kinglsey has loads of potential, but here Spider-Man beats him in two pages.  Hopefully Yost picks up on this conflict further down the line.

On the plus side, this issue introduces an interesting new dynamic between Spider-Man and the Punisher.  It was interesting to see the Punisher try to dissuade Spidey from killing, showing a softer side to his character and that he is well aware of what a life of murdering criminals is doing to his psyche.  I also enjoyed David Lopez's artwork; he did a great job of rendering the action sequences.

A lacklustre use of some big name villains mars what is otherwise an interesting new dynamic between Spider-Man and the Punisher.
Read More
Newer Posts Older Posts Home