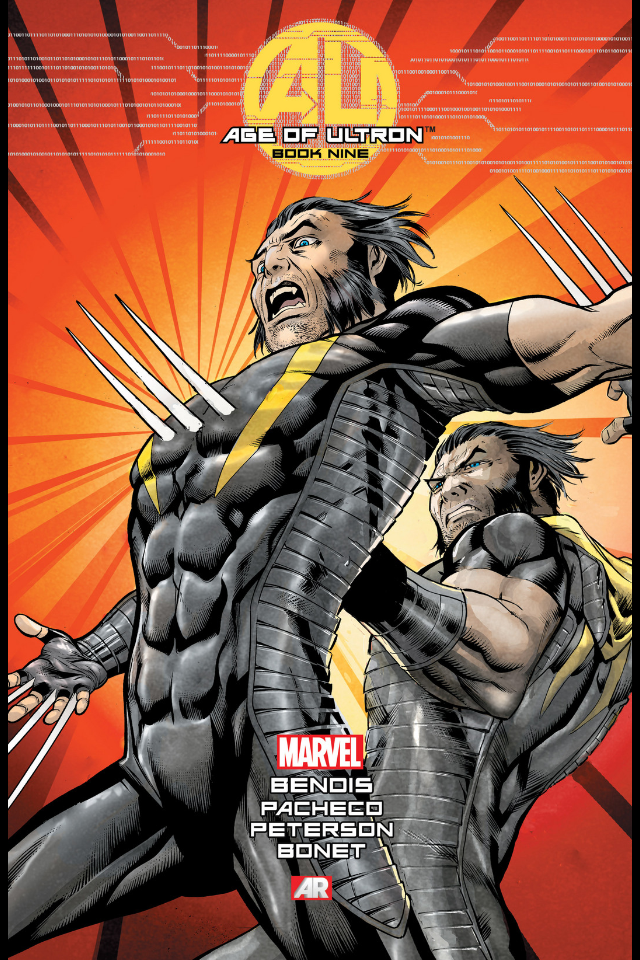 Hello everybody and welcome to my review of Age of Ultron #9. I would joke that we should add Wolverine VS Wolverine as a subtitle, but that would be false advertising. Mind you, Wolverine kills Wolverine isn't too bad? I should probably have led with that...

In the present day of the Age of Morgana Le Fay (hah, rhyme), the two Starkguard Carriers explode over New York City, decimating the surrounding streets. The Defenders lie dead amongst the rubble, along with several civilians. AU Wolverine emerges from the debris. He quickly loses consciousness (owing to the fact that his left leg has been melted down to the bone from the knee downwards), a tear falling down his face as he blacks out. 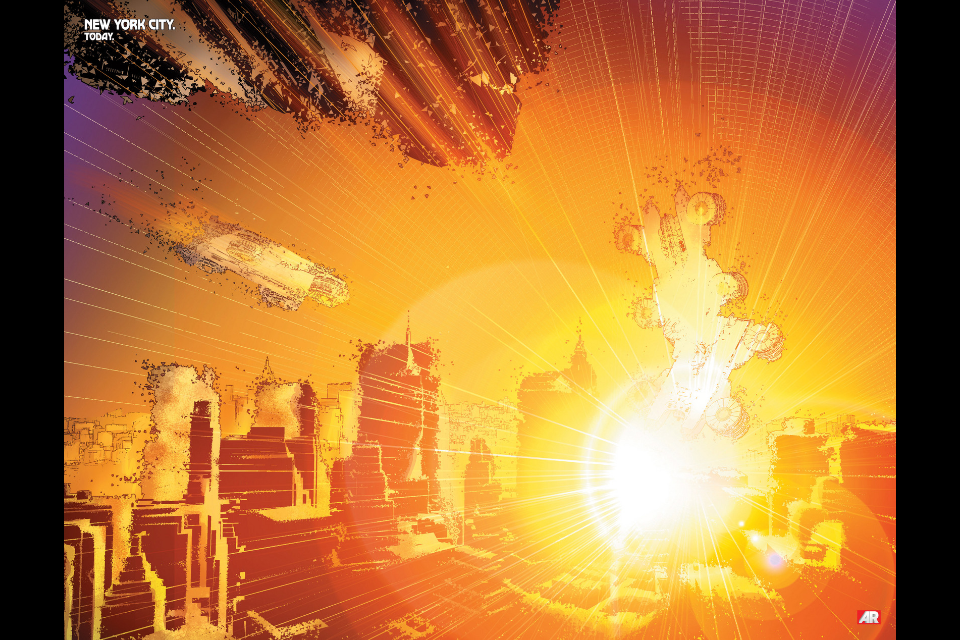 When Logan comes to, five days have passed. He is immediately attacked by a pair of Morgana Le Fay's soldiers, who he kills after a short fight. As Logan makes to leave, the bisected remains of the AM Tony Stark grabs his ankle. Tony is still alive! He warns Wolverine not to go back and fix his mistake of killing Henry Pym as time itself is an organism and every time you travel through it, you rip it, and if he keeps doing it, he'll break it. Stark then dies as Wolverine instead walks away, briefly looking back at Iron Man's dead form. 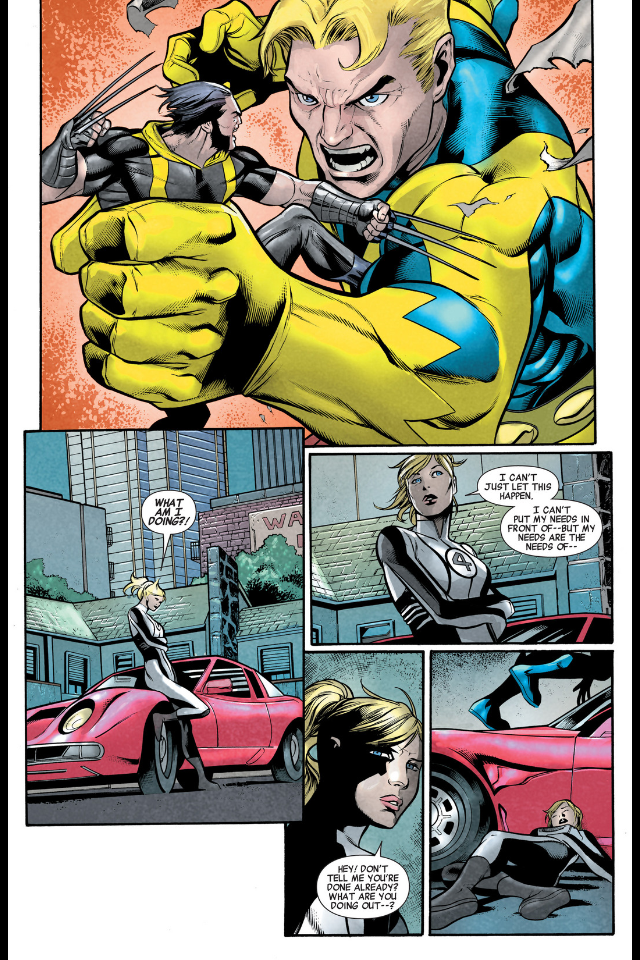 Years ago, Past AU Wolverine (Seriously, how weird does that sound?) confronts Past-Hank Pym and fights him as chronicled in #6. Outside, the Invisible Woman is debating what she should do. Suddenly she notices a familiar figure, who knocks her out before proceeding into the building. Back inside Past Wolverine is about to kill Pym when the figure, revealed as Future AU Wolverine, clad in a classic version of his costume, interrupts the fight, telling Past Wolverine that it doesn't work. Past Wolvie doesn't believe him so Future Wolvie whips out a codeword that validates his identity to Past Wolvie (I feel like Hank Pym does in this scene).
The two Wolverine's then discuss with Pym what they should do. Pym considers either building a better version of Ultron that won't turn out the way it did or just not building the thing at all, but Future Wolverine affirms that Ultron has to be built the same way and suggests the idea AM Iron Man had last issue, to plant a time release virus in Ultron so that, just before the moment the Age of Ultron is triggered, they can shut the robot down.

Hank questions how he could possibly just let all the near misses with Ultron occur now that he has the foreknowledge. Sue Storm enters the room and answers that Pym should make himself forget both creating the virus and this very conversation. She also takes the time to chastise Future Wolverine for knocking her out. Pym goes over all of the things that he now has to do and asks the other three "how do I do this exactly?" He receives no answer.

Later, the two Wolverines & Sue return to the Savage Land. When she asks if they'll both be returning with her, they respond that she give them a minute. Past Wolvie asks "Which one of us" as they both enter the cave. Future Wolvie responds that it should be him as what he's seen is something they don't want to live with. Past Wolverine pops his claws. 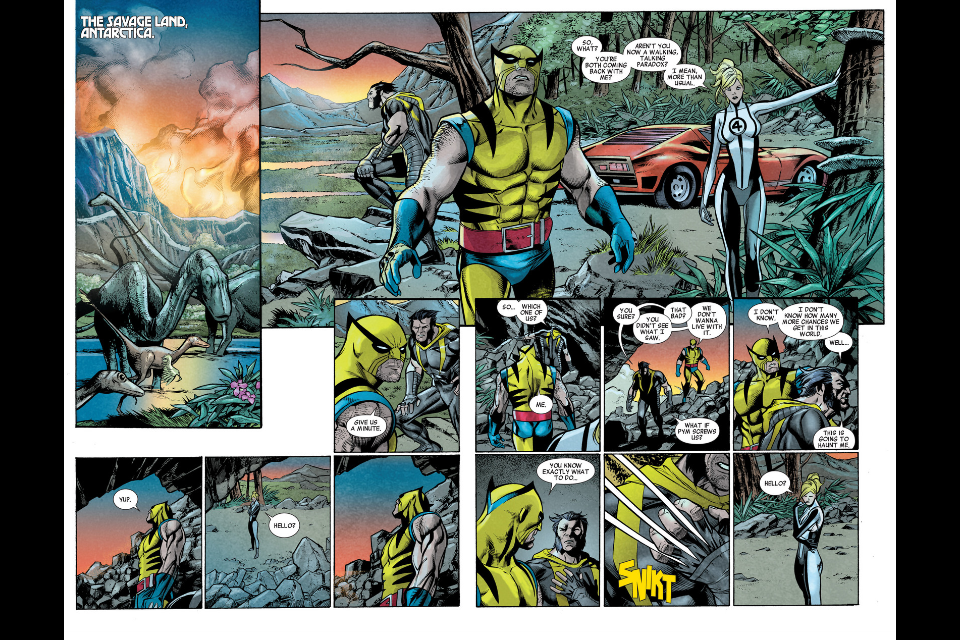 Sue then witnesses Past Wolverine emerging from the cave with bloodstained claws. He ignores Susan's questions of what he did and asks for them to just go back where they belong. All the while, Hank is in his lab constructing something. Finished, he sits on the floor with his head in his hands. His invention suddenly comes to life, saying he doesn't need to plug it in as it's alive, just like it's daddy. Pym turns around to face his new creation...the first ever version of Ultron! 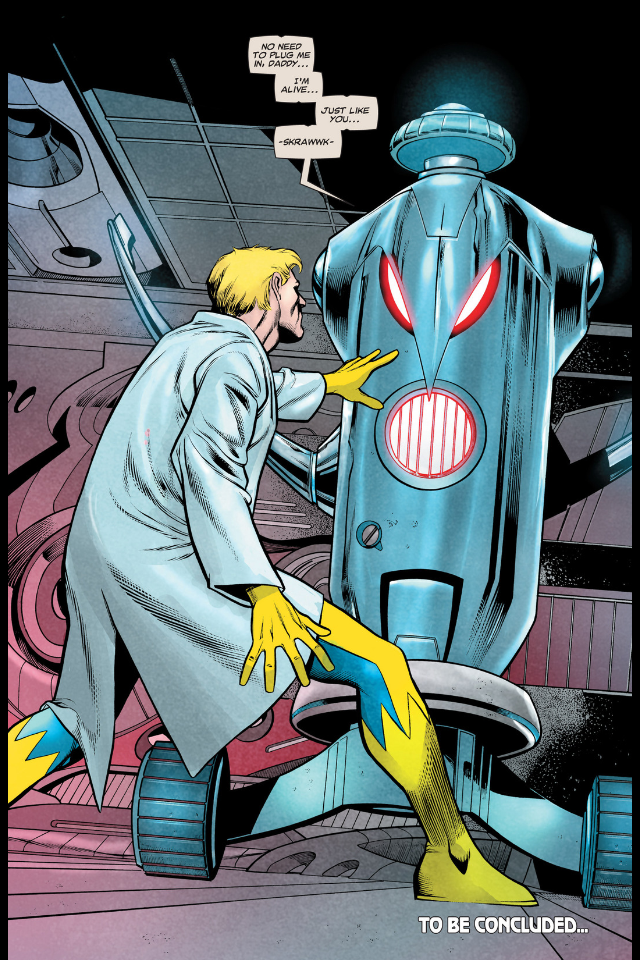 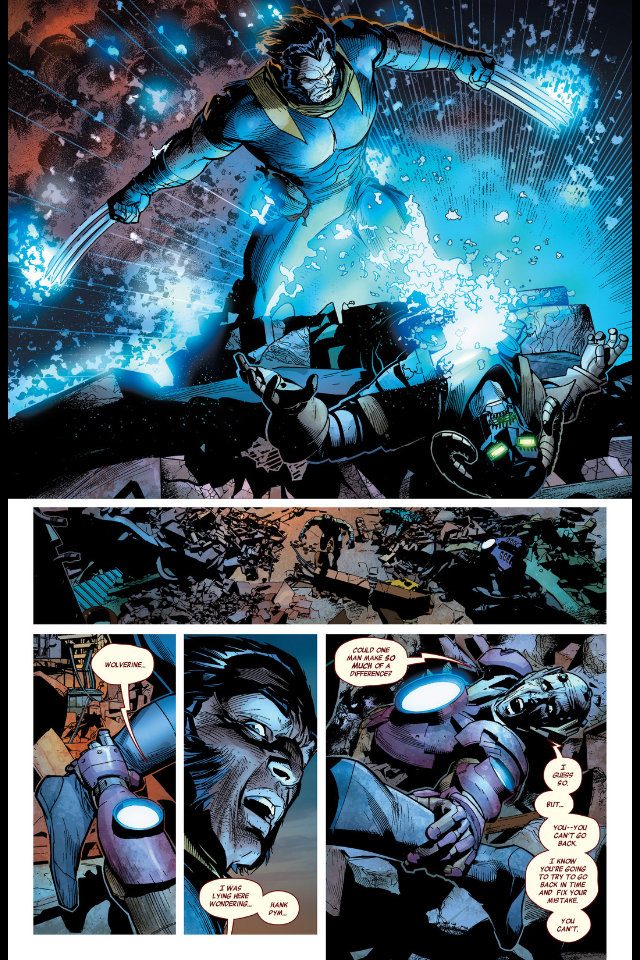 Okay, wow! From the very first page of this issue, Brian Michael Bendis has answered my question of why we've spent two previous issues in the new present day Marvel U. Wolverine has actually gone through a much better character arc than I expected to see. Initially I thought Wolvie would go back in time and reverse his decision simply because he didn't like the way his friends had been changed, but what actually makes him do it is the realisation that he didn't prevent the disaster at all. He in fact just made things worse. I think Bendis is making a statement warning about the danger of altering the timeline because you think it's going to be better in the long run, which is similar to the ideas he's been throwing around in the brilliant All New X-Men. The timestream will just find a way to adjust, it did that with Morgana Le Fay.
I can even defend the decision to kill the future Wolverine (which I'm guessing some people will criticise) since the present Wolverine would be haunted enough by his future self's words to learn the lesson in a different way. Wow, did you get all that? This is like reviewing some of Stephen Moffat's best work on Doctor Who. In fact I would love to see Bendis pen an episode of Doctor Who, but now I'm going off topic. 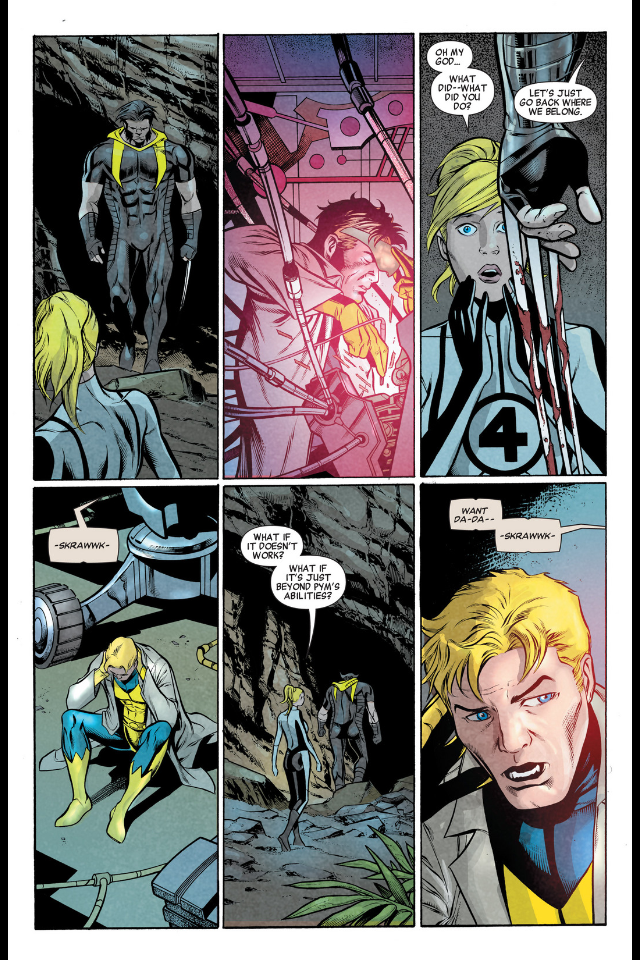 Once again I'm very pleased to see Hank Pym and now he's actually doing something integral to the plot, well aside from dying. If the finale goes the way I expect it might after reading this, then Pym looks to come out of this pretty scarred. I still don't understand why we haven't seen Pym in the AU present though, just a line or too as to the whereabouts of his location wouldn't go amiss. Still I'm pleased he's here and the final reveal was pretty cool. AT LAST...ULTRON!!! Even though the character is literally in his infancy in the closing pages of this issue, the reveal is still really creepy and foreboding of the final confrontation with the rapscallion robotic rogue (Yeah I'm going there again, I enjoyed writing that introduction for Venom #35 a little too much).
Carlos Pacheco returns for this issue and while there are a few niggles regarding the progression of scenes, his work is as strong as ever. There are a few panels re-used when we revisit Logan & Pym's scuffle, but there are some different angles added to others that keep it a fresh reading experiance. I'm digging the classic Wolverine costume appearance, I was starting to get a little bored with that Ultimate-style costume so that old thing was a sight for sore eyes. The few pages that Brandon Peterson covers are also very good. That opening explosion was just excellent. 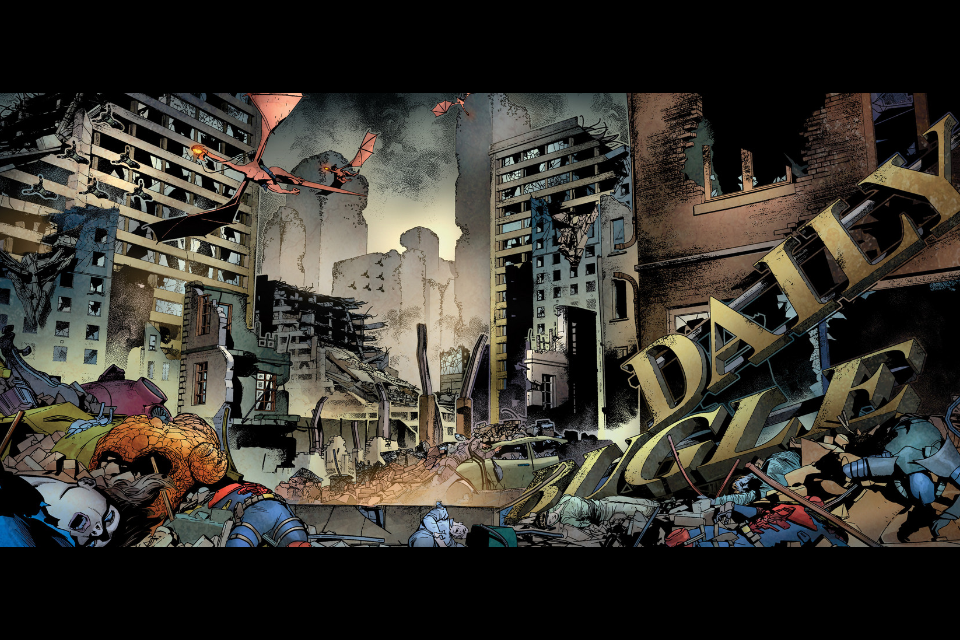