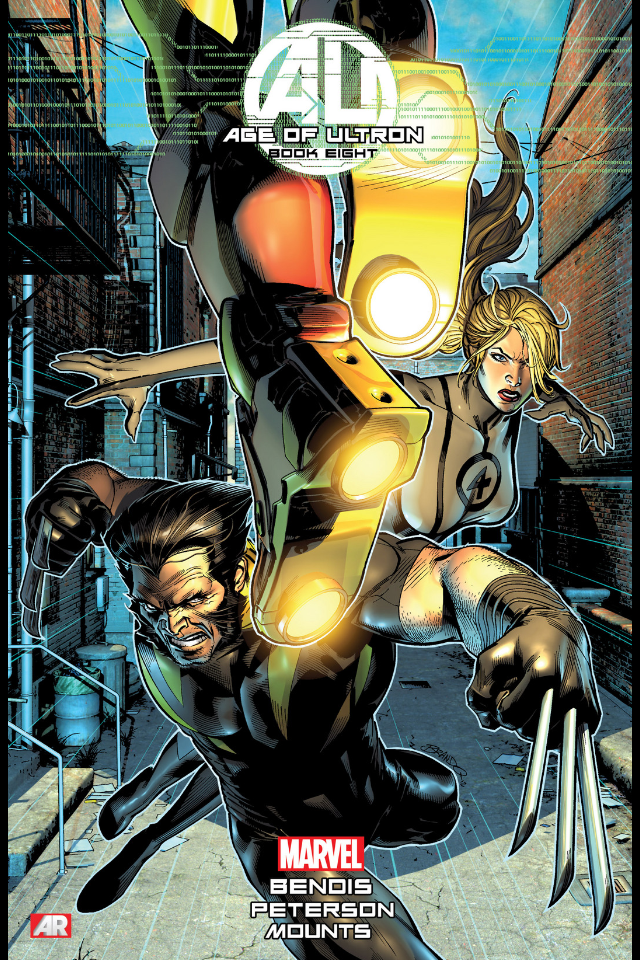 Hello everybody & welcome to my review of Age of Ultron #8.

In the new present day Marvel U, Tony Stark has extracted and copied the memories of AU Wolverine & Invisible Woman to view. He is stunned as he watches the alternate timeline unfold before his eyes. Tony turns to Professor Charles Xavier & Emma Frost (who look to be his consultants) and asks them to tell him this isn't real, but the two say otherwise. These two doppelgangers are indeed Sue Storm & James "Logan" Howlett, just not their versions of them. 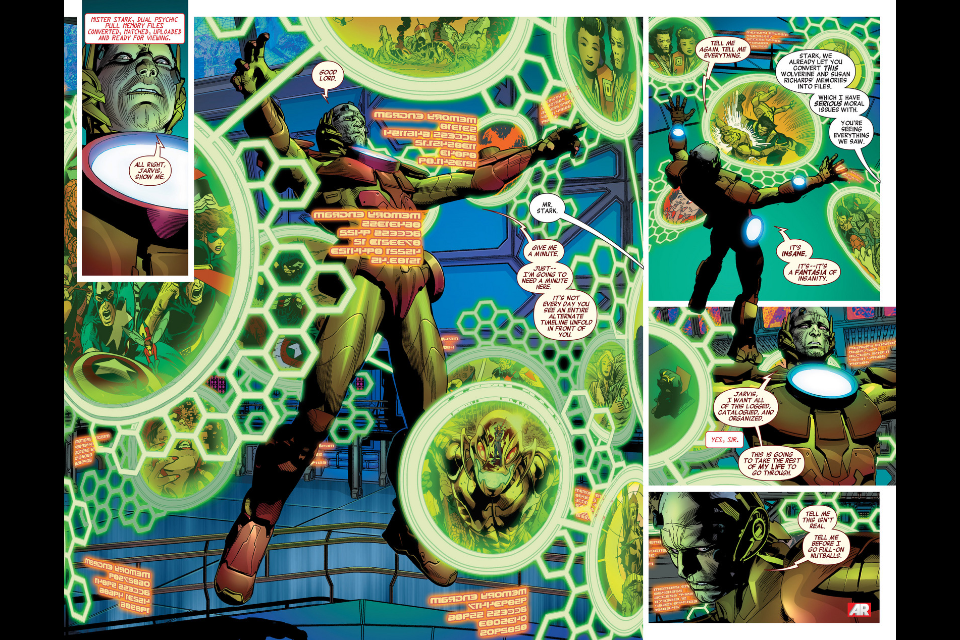 Stark doesn't entirely buy it however and asks if there's no way Morgana Le Fay planted the memories they are now viewing. Again Xavier & Frost disagree and say this is exactly what it appears to be, that the two AU heroes have broken the timeline. Tony asks that Frost & Xavier send the Defenders away (despite their Wolverine wanting to interrogate the AU one.) and to make sure that no one else knows about this. 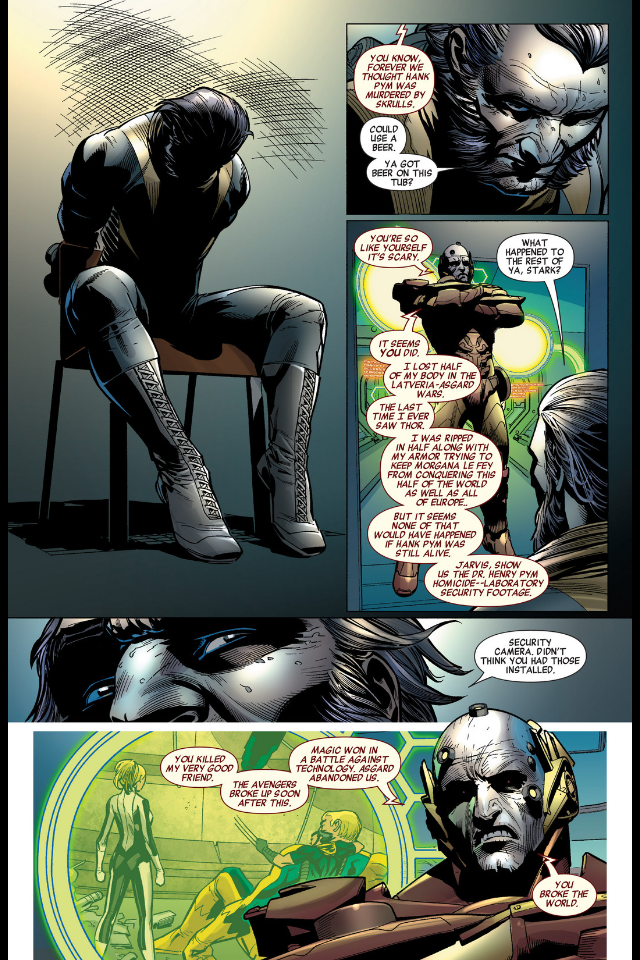 A little later, Stark visits AU Wolverine in his cell, giving him a crash course in this alternate timeline's history, Stark lost half his body during the Laveria-Asgard Wars (That sounds like an awesome event comic we'll never see) trying to stop Morgana Le Fay from conquering half the earth, which also led to Asgard abandoning the Earth. He also reveals that Hank Pym's murder (which they always attributed to Skrulls) split the Avengers up and very bluntly remarks that Logan "broke the world".

Meanwhile, Susan Storm stirs in her own cell. She asks to speak with someone, but nobody answers. Sue then decides to go about things "old school" and starts using her powers to crack and break her shackles.

Tony asks Logan if he tried to talk Hank Pym out of creating Ultron. Logan replies that it didn't take (uh, you never tried that in the first place Wolvie) like the other version of Stark said, he jokes that it's like a religion to guys like Stark and Pym, if they see something worth building, they are going to build it. Wolverine adds that he isn't proud of himself after Stark simply says "and so you killed him". Iron Man calls Wolverine a fool and asks him if he thinks this world is any better than the one he set out to change? 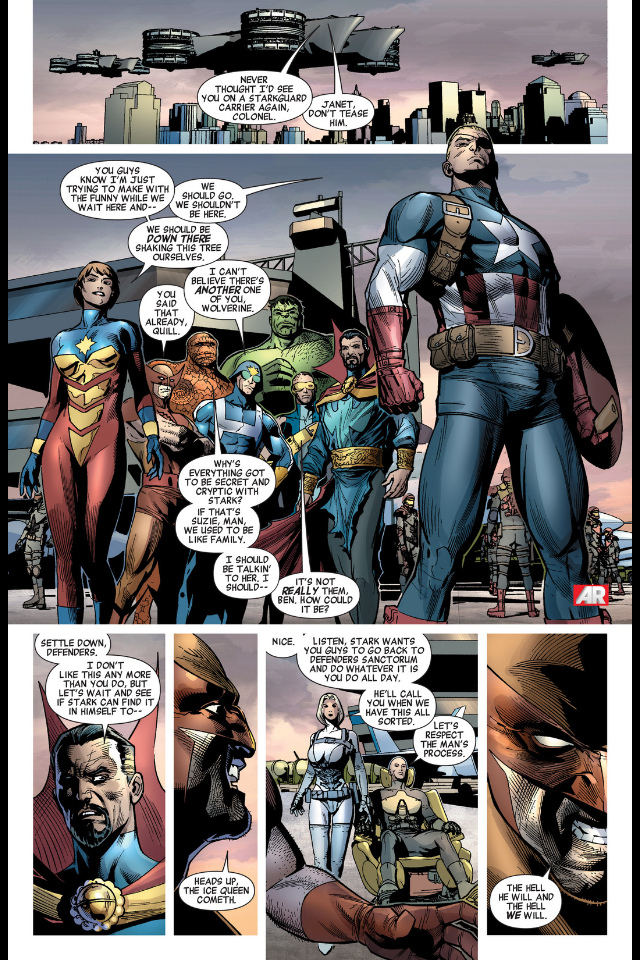 On the deck of the Starkguard Carrier, the Defenders are discussing the AU heroes. They are then approached by Professor X & Emma Frost, who asks that the team go back to the "Defenders Sanctorum and that Stark will call them when they have this all sorted, Professor X adds that they should respect the man's process. Wolverine responds "the hell he will and the hell we will". Thngs start to become more heated between the two parties. Eventually the Thing decides to just charge past Emma in order to see Sue. Frost threatens to shut the Thing's brain down, but Dr Strange intervenes and knocks the two out with a disorientation spell. The Thing, Other Wolverine & Cable/Cyclops head into the ship whilst the rest of the team stay in position.
While all this is going on, Tony is asking AU Wolverine whether he considered anything else, such as placing a time-release virus in Ultron (Hmm...). He's suddenly notified of the security breach and goes back to his original theory of this being a Le Fay trick.

Elsewhere, the Thing, Cable & Other Wolverine have reached Sue Storm's cell. They force the local Starkguard to open it, but the room is empty? Of course, Susan has turned invisible in the cell and slips past the trio, making a run for it. She's quickly cornered by Stark though, who points out that her invisibility is useless against him as he can see all spectrum's. He is about to kill Sue when an enormous portal suddenly opens outside by the Starkguard Carrier fleet. It's Morgana Le Fay with an army of Dr Doom-like soldiers. 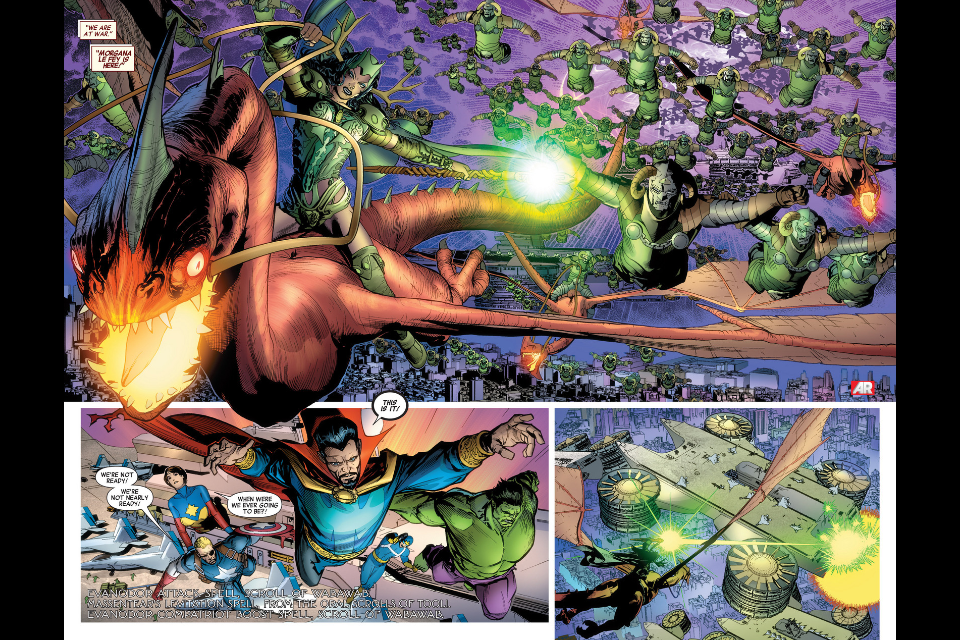 Tony fires on Sue, who shields herself in a ball, and retreats outside, calling in a swarm of drones to do battle with Le Fay. The Defenders outside also attack Morgana's soldiers. AU Wolverine, who was previously lying on the floor healing after being shot in the side by Stark, heads out of his cell and through the corridors, where he briefly spots the other Defenders. Their Wolverine give the AU version a sad look in anticipation of whats coming.

Outside, Stark confronts Le Fay, warning her that her "wonky timeline" plan won't work. Le Fay responds that she barely understands what Stark is saying, but urges him to turn around regardless. Tony does so just in time to witness one Starkguard Carrier collide into another. He watches in horror as the two falling ships crash into the streets of New York... 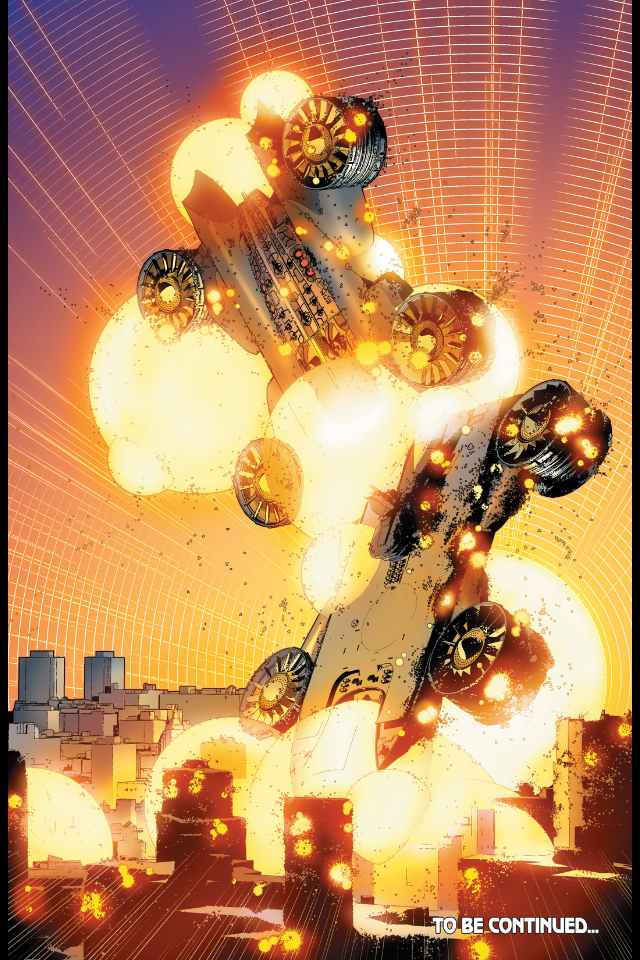 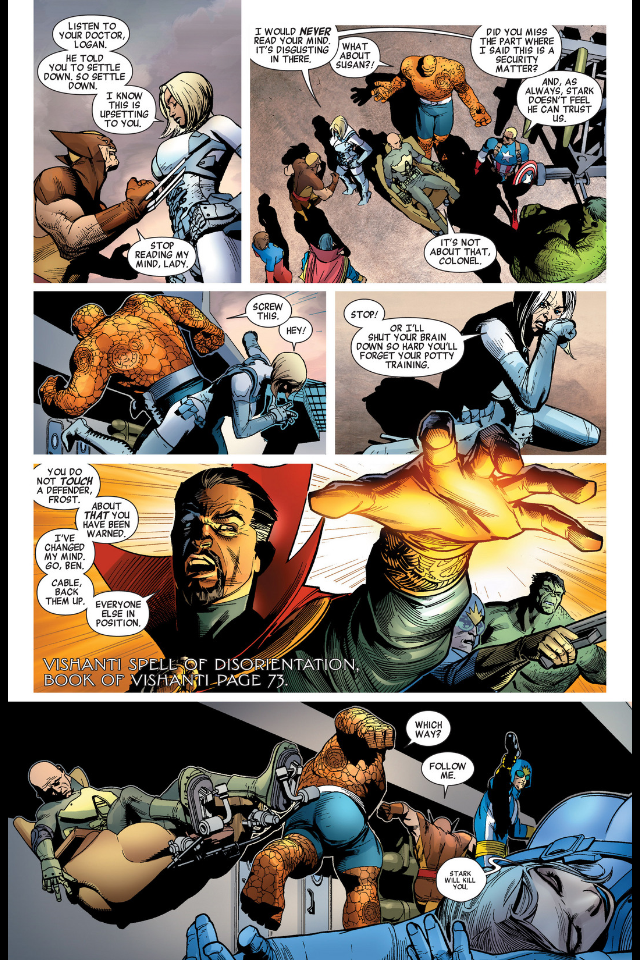 Last issue my biggest complaint was that the new present day reality of the Marvel U seemed too superfluous to spend an entire issue there. While that also rings true for this issue I definitely enjoyed it more than the previous one and there is certainly a sense of unpredictability with this new setting.
I'm very pleased with the way Iron Man is characterised here. His appearance at the end of last issue made me think we were in for a megalomaniacal lunatic treatment, much like Iron Maniac from the Marvel Team-Up series, and although he's created his own police state, this character still feels like Tony Stark which is great. His interrogation of Wolverine is well handled by Bendis. Stark gives Logan a dose of common sense with his words and since Wolverine is the kind of guy to ignore common sense most of the time (that's what beserker rage will do to you.) he in real need of it. Morgana Le Fay is an unusual pick for this new worlds  nemesis (though they got the name wrong, it's either Morgan Le Fay or Morgana) but in a good way.

The Defenders team however aren't very interesting this time around. Their going to be irrelevant by the end so I'm not interested in seeing a team dynamic in this issue. They're scenes feel like padding which is something this issue needs like a hole in the head. Plus the battle with Morgana and the cliffhanger ending are both quite rushed, and that doesn't do the padding with the Defenders any favours.

Brandon Peterson is the sole penciller for this issue and though I've had a couple of problems with his art in the past, this issue is his best work so far, there's less of the weird facial expressions (key word being less) and the action scenes towards the end look suitably epic. While this was overall a stronger issue than the previous one, I have concerns that, much like the last few pages here, the final conflict with Ultron is going to feel very rushed... 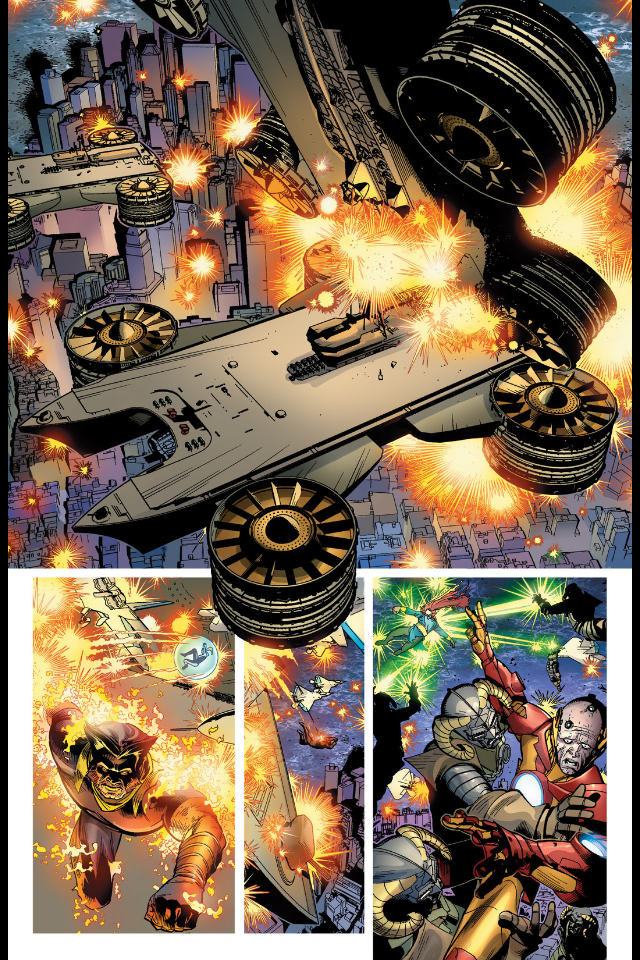 While we don't usually post solicits on this site, this is for all Ben Reilly fans out there, aka The original Scarlet Spider/ the perfect clone of Peter Parker...your boy is coming back to comics. Or at least that is what is portrayed in the latest cover of Scarlet Spider # 21.

The cover features a full on Ben Reilly Scarlet Spider suit with a blue sleeveless hoodie and impact webbing (a trademark of Ben Reilly).

Check it out below, with the comments from Marvel 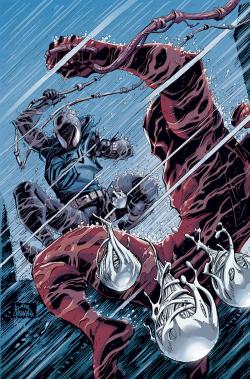 SCARLET SPIDER #20 & 21
CHRISTOPHER YOST (W) • CARLO BARBERI (A)
Cover by RYAN STEGMAN
INTO THE GRAVE PART 1 (of 3)
• After last issue’s shocking ending, everything has changed for Kaine. His second chance at life is over.
• At his lowest point, he comes face to face with the one man that’s fueled his obsession, hate and guilt his entire life... BEN REILLY.
32 PGS./Rated T+ …$2.99