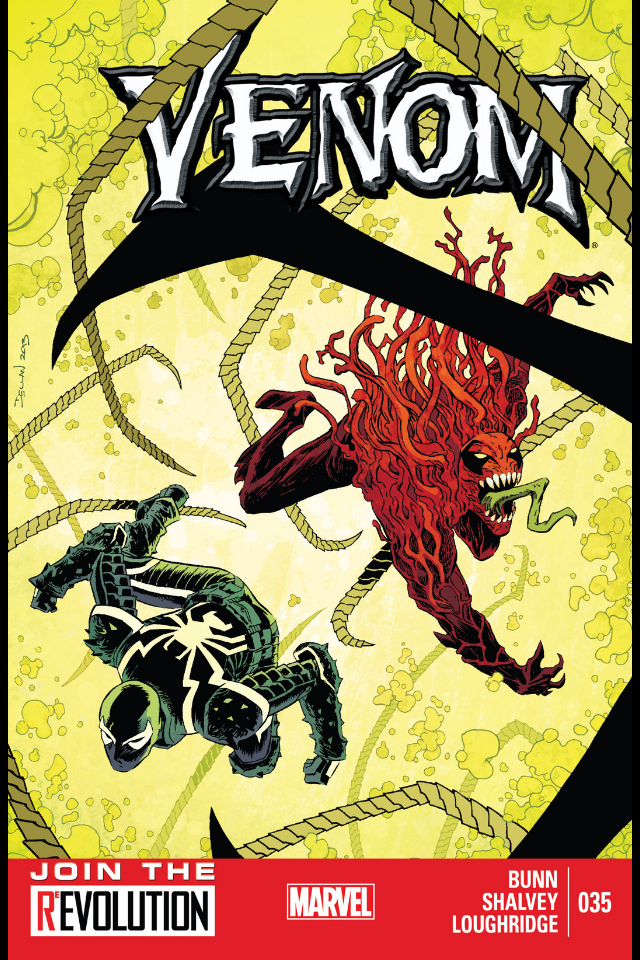 Hello everybody and welcome to my review of Venom #34. The finale to the current story arc, featuring the titanic team-up of two sensational symbiote-powered warriors, Agent Venom & Toxin, united against a common threat, the Symbiote Slayers! Will our heroic hero & awesome anti-hero defeat their chilling new foes? I guess we'll soon discover as we read on, Excelsior! 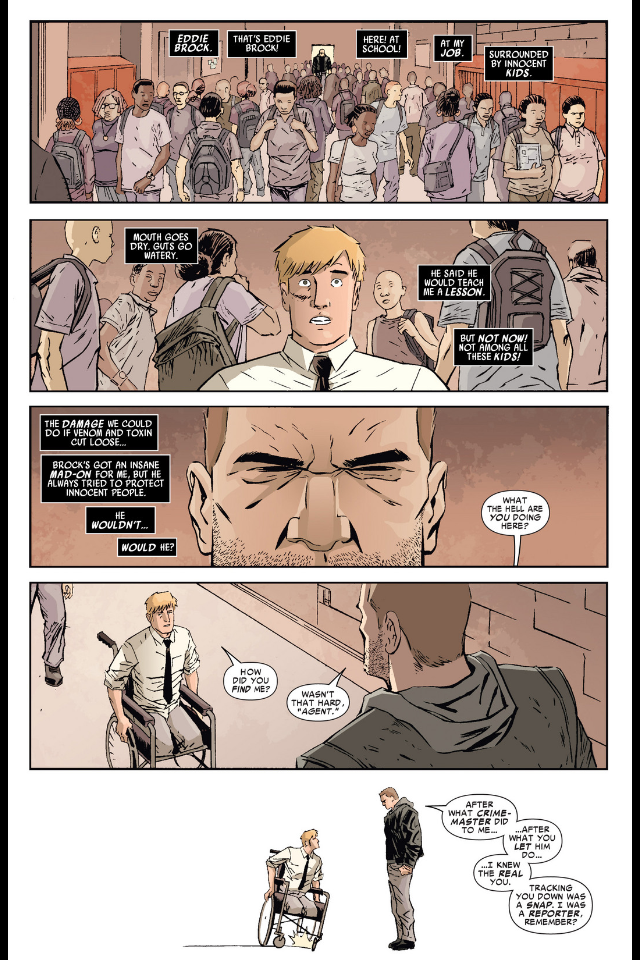 Flash has arrived at Philadelphia High the morning after his brutal fight with Eddie Brock, aka Toxin. He notes the reactions from his students to the bruises on his face and the rumours that will result from it. Flash is then shocked to see Eddie Brock, aka Toxin standing at the other end of the hallway. Flash quickly confronts him and asks both what he's doing here and how he found him. Eddie replies that it wasn't that hard since he used to be a reporter and that they are going to go outside and finish what they started. If Flash refuses, then Brock will let Toxin off the lease right there in the school.
Flash doesn't fall for the threat though and tells Eddie that he won't let him hurt the kids. Eddie responds that he was going to say the same thing to Flash, calling him an idiot for bringing the Venom symbiote in amongst all those children. Flash snaps that he's had enough of Eddie's "holier-than-thou spiel", and while he may whine about being bonded to Toxin, the truth is that deep down he wanted it. Of course that pushes Eddie's buttons and he gives Flash his best evil stare, telling him that he will do this right here if Flash wants. He suddenly stops mid-sentence and sniffs the air, recognising the scent as similar to the U-Foes Experiment. 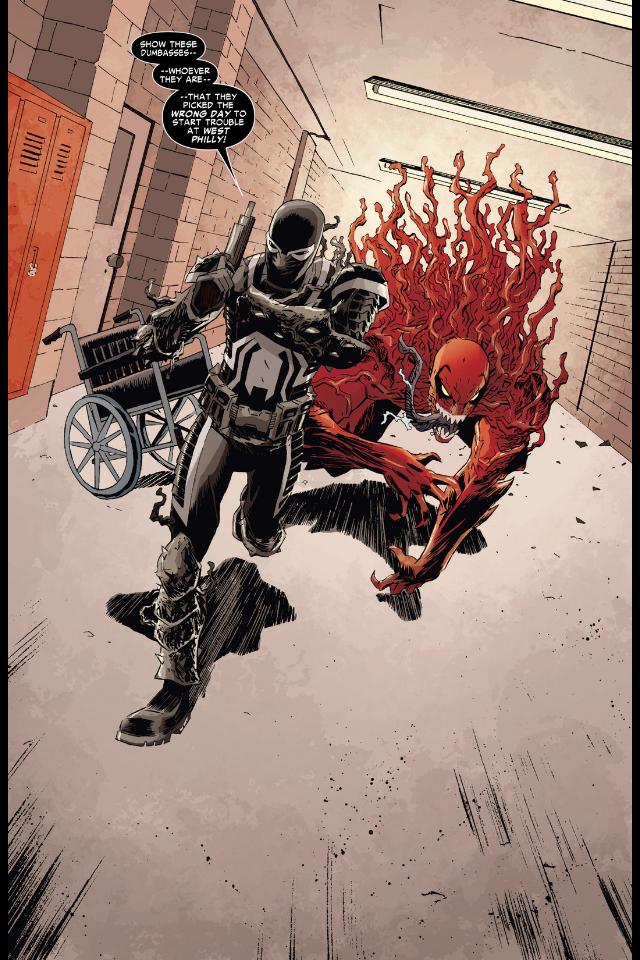 The "Symbiote Slayers" have arrived at the school. They immediately begin killing everyone in the nearby vicinity. The fire alarm is quickly triggered and the students take cover from the monsters. Flash orders Andi and several other students to hide in a nearby classroom, promising Andi that he won't let anything happen to her, while Eddie watches this with a contemplative face. Once the kids are secure, the two men agree to kill each other later, morphing into their respective symbiote forms .
Toxin attacks the Slayers head-on with brute ferocity, killing one instantly, while Flash opts for guerrilla tactics, attacking the Slayers from the various air vents with symbiote tendril's. While Flash wonders if Eddie is right about the two of them and the Slayers, a nearby kid is taking pictures of the action with his iPhone (his parents must have a lot of money) from the safety of his classroom and snaps a mug shot of Toxin kicking some serious Slayer arse.

The Slayers start to focus their attention on Brock and gradually begin to overwhelm him. Despite pondering whether he should let the Slayers & Toxin slaughter each other, Flash comes bursting through the floor (in full-on Classic Venom mode) to Eddie's rescue. Venom literally shreds through the Symbiote Slayers while Toxin recovers and re-joins him in taking them out. With the Slayers all dead, Toxin pays Venom a compliment, remarking that he "didn't do too bad for an old guy". He then asks if Flash is ready for what's next. 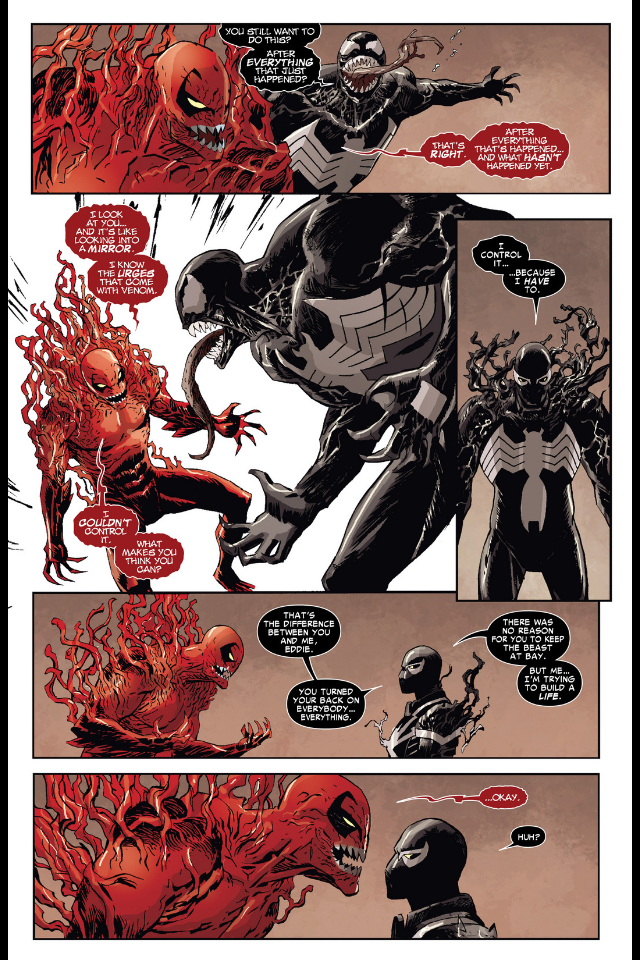 Flash questions if Eddie really wants to resume their conflict after what's just happened, to which Eddie responds that he does because he looks at Flash and sees the same urges he had when he was Venom. He doesn't believe that Flash can control those urges because he couldn't. Flash replies that he controls the Venom Symbiote because he has to. The difference between him and Eddie is that because Eddie turned his back on everyone, he had no reason to keep the beast at bay, whereas Flash on the other hand is trying to build a life. After a brief pause, Eddie tells Flash that it's a deal. He'll let Flash live a life, but he'll be watching him, and when Flash lose control, he'll swoop in and kill him. Flash replies that if something like that were to happen, he'd want Eddie to kill him. Eddie remarks that it's not if, it's when, and repeats his question to Flash. "Are you ready for what comes next?"
The casualties are surprisingly low, with a few people rushed to hospital and two dead cops. Flash is interviewed by one of the reporting news crews, who ask if he saw what happened. Flash answers that he didn't see much, but he saw the "creature" the news crews are talking about (Toxin), and that it singlehandedly fought off the Slayers. Toxin watches from the shadows as Flash continues, saying that it's a good feeling knowing someones out there looking out for you, "watching out for whatever comes next." Meanwhile, a lone surviving Slayer skitters across the street... 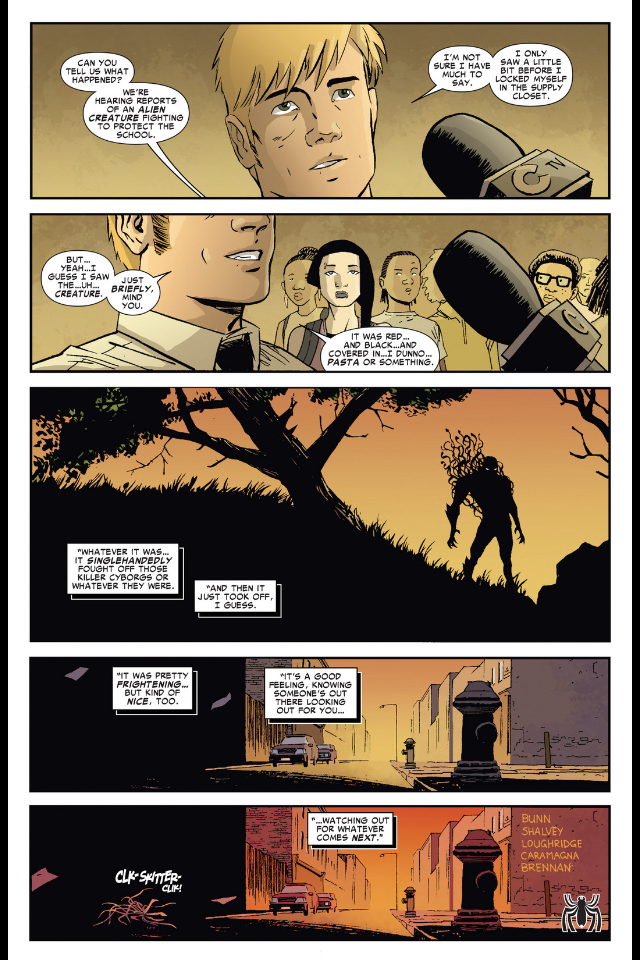 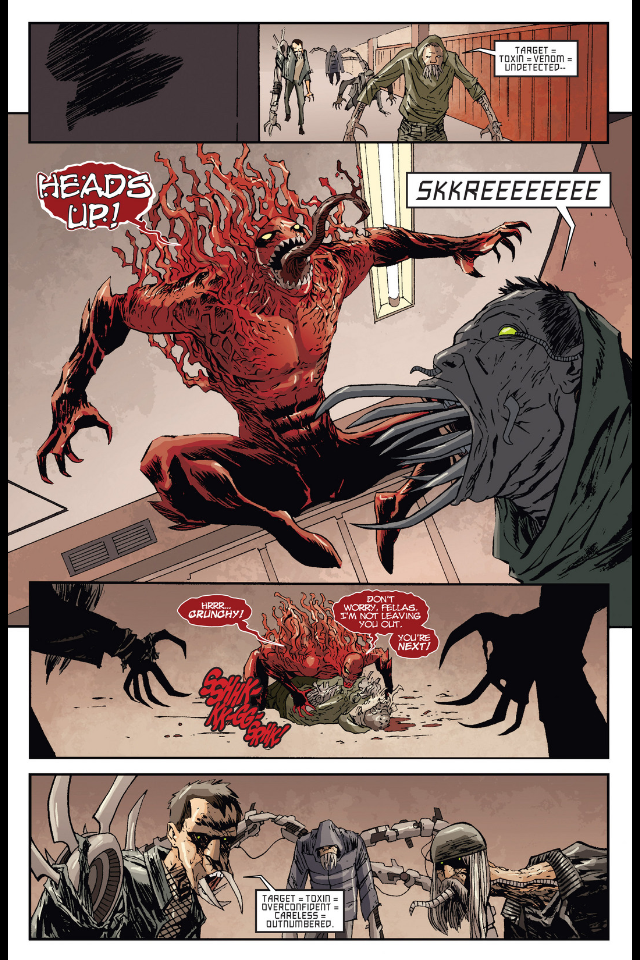 When I reviewed #34, I made the mistake of assuming that it was the final part of the current storyline, and that the next issue would start a brand new story arc relating to the "Symbiote Slayers". Boy was I wrong.
After a lot of buildup for the past few issues of the Venom/Toxin showdown, it was nice to see Cullen Bunn just cut to the chase and have the two in a tense face-off by the second page. Bunn's characterisation of Eddie Brock is fantastic. He's the Lethal Protector again, just with a different symbiote. Despite his initially antagonistic stance against Flash, we begin to understand his point of view as the issue progresses, and by the end he's in the stance of anti-hero again which is exactly where he should be.

Flash fares just as well here if not better. I really like how he isn't intimidated by Toxin despite the beating he received previously. The moment where he saves Brock is brilliantly handled because Flash is in control from start to finish during the battle, which shows how he's progressed as a character since #30. Plus he goes full-on Classic Venom which is always a welcome sight. It's also interesting to note that the Venom & Toxin symbiotes have now reversed roles since Toxin's first appearance in "Venom VS Carnage". 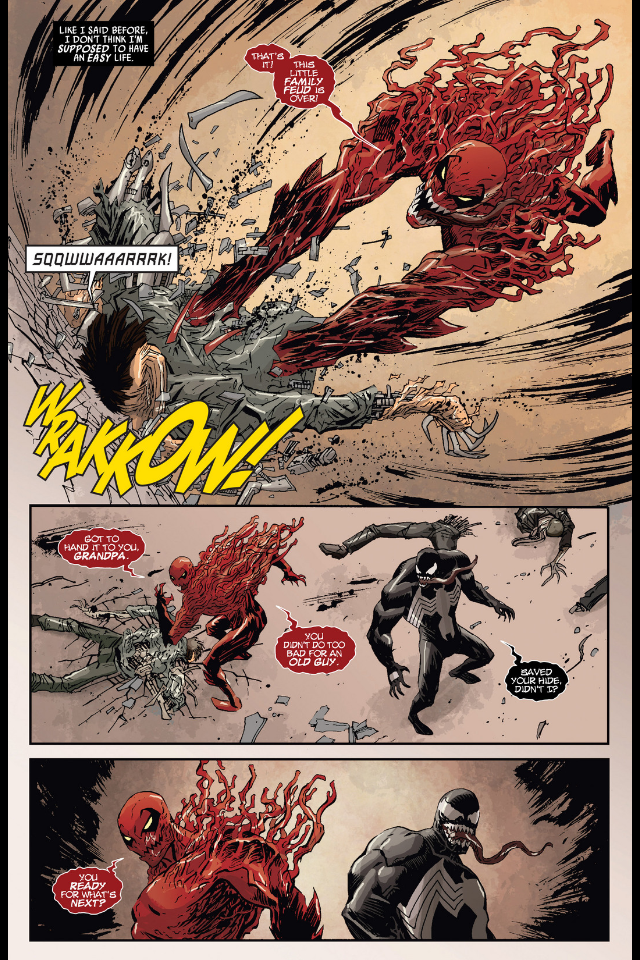 The "Symbiote Slayers", while they are very menacing, aren't the focus here, their just an excuse to have Venom & Toxin form an uneasy alliance, but that's not a criticism as the interplay between those two is great, and the stinger at the end shows that Bunn isn't finished with them anyway.

Declan Shalvey has consistently impressed me with his artwork and this issue is no exception. Venom & Toxin look amazing, especially when Classic Venom rears his ugly-but-also-really-awesome head. There's some vicious action here and money shots aplenty, Lee Loughridge's colours also continue to help provide a near-perfect mix of gritty shadows and colourful characters (and not just in the literal sense).

Overall this story-arc has been great and I've really enjoyed reviewing it from start to finish. Not just as a Venom fan though, but also as a fan of Flash Thompson (which is something I thought I'd never say out loud before this series started). This has been a fantastic character study of both Flash & Eddie Brock and I'm super excited for what's next in store for our favourite symbiotic hero. Cullen Bunn, I salute you... 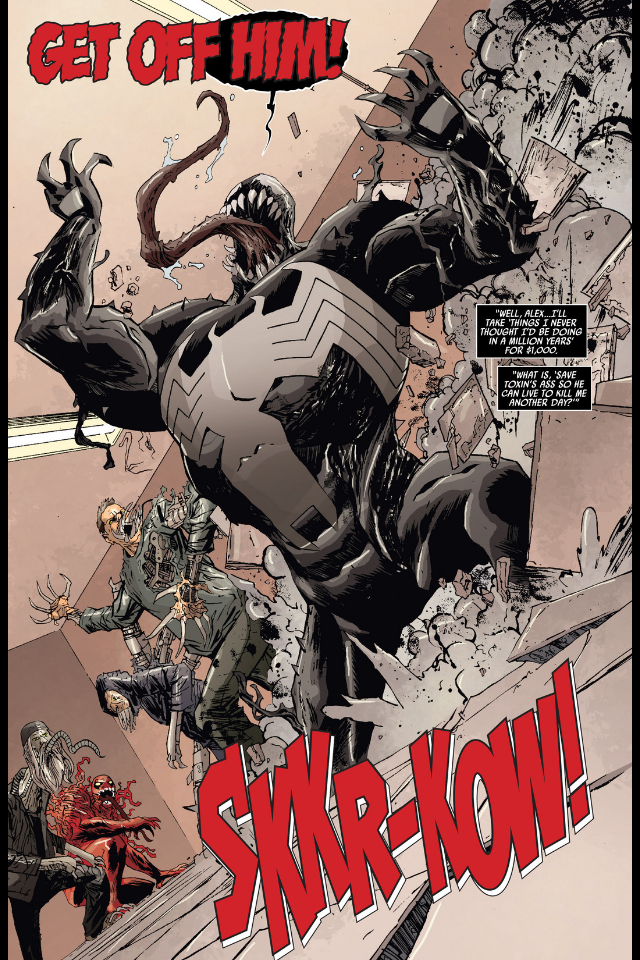 Hey folks, Good News: The Web Head legion Podcast is back with another sensational episode titled: My Favorite Octopus.


On this episode we welcome back the mighty and magnificent Mr. Tom Mets, as well as long time Spider-Man enthusiast and dedicated fan straight from the pages of Spidermanreviews:.Mr. Aaron Gilbride aka Combustible Pumpkins.


Tune your ears and press play as we run down some of our very favorite Dock Ock stories of all time, and discuss the VERY suspicious behavior of lead Spider-Man writer Dan Slott. Also dont miss our detailed review of issues 9 and 10 of Superior Spider-Man. It's all for your listening pleasure.