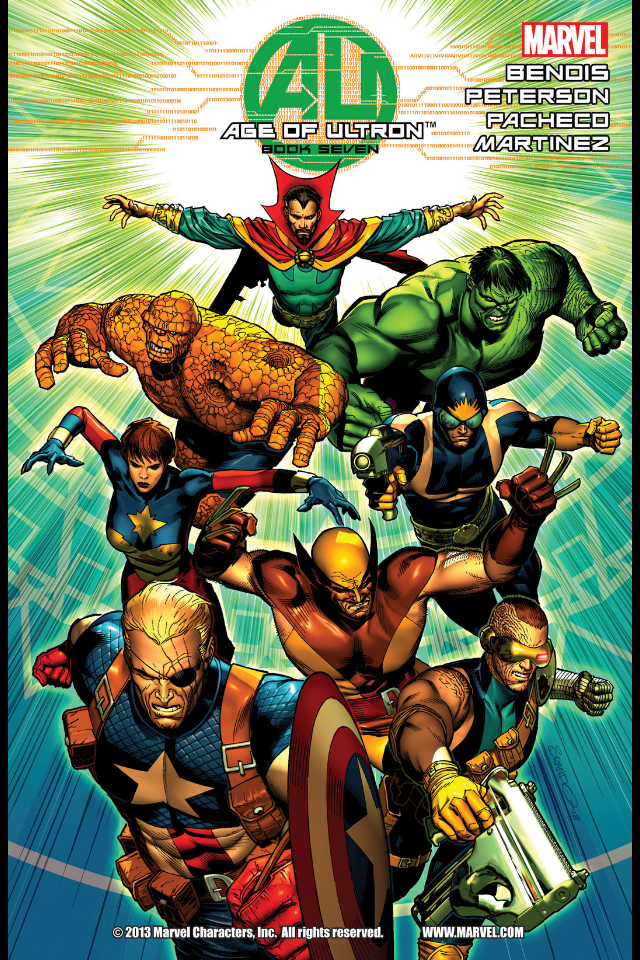 Hello everybody & welcome to my review of Age of Ultron #7, or if we're being honest, Age of the Facist Defenders #7! 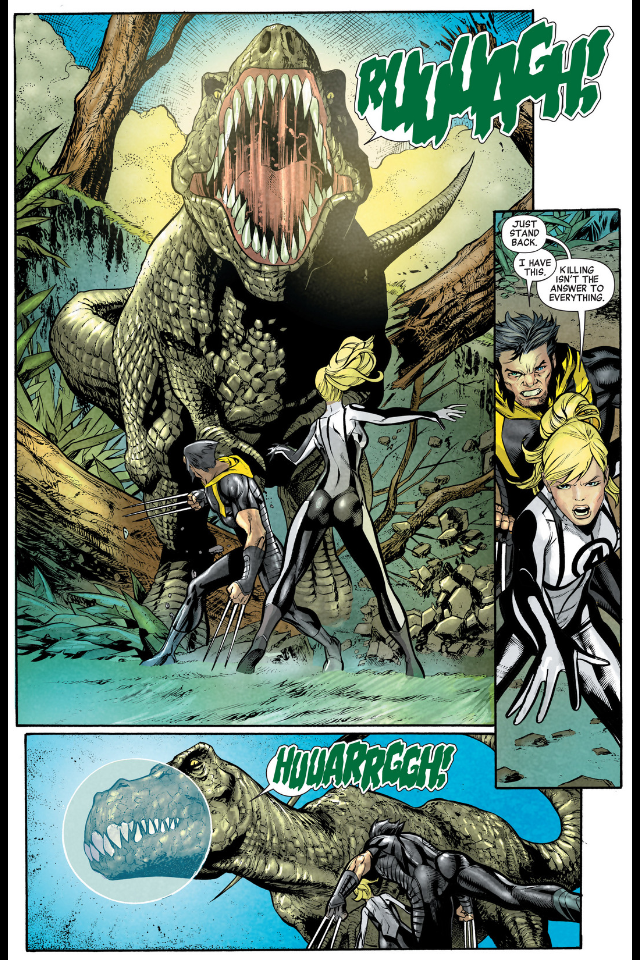 Wolverine & the Invisible Woman are heading back to the Savage Land in their stolen hover car. While Sue is still in shock over helping to murder Hank Pym, Logan feels justified in what he did and reminds Sue that he told her to wait in the car. Upon landing the car (in a different location from where they stole it so as not to have an unnecessary encounter with Past-Nick Fury Sr.) the duo are beset upon by a T-Rex, who Sue quickly incapacitates with a force field, using this to prove a point to Wolverine that killing isn't always the answer. They reach the bunker and, once they make sure Past-Nick is long gone, enter and activate the time machine. As they leave the past, Wolverine once again
affirms that they were right to come here.

They materialise in the present day, where they find that the Savage Land is now an alien junkyard, filled with Kree & Skrull spaceships. Sue speculates that this must have been where the Kree/Skrull War happened in this new reality. They are then forced to cloak as a trio of men in armoured suits similar to Iron Man (one of them mentions that they are called Starkguard), who are jovially discussing one of the guards love life. Susan is perplexed by the name Starkguard, while Wolverine simply states that he'll get the car.

Later they arrive at New York city, which, while no longer a wreckage, has several smaller versions
of the S.H.I.E.L.D Helicarrier flying over it, which distresses Sue to say the least, though Wolverine doesn't seem to care, remarking, "the world's still here. Ain't it?" 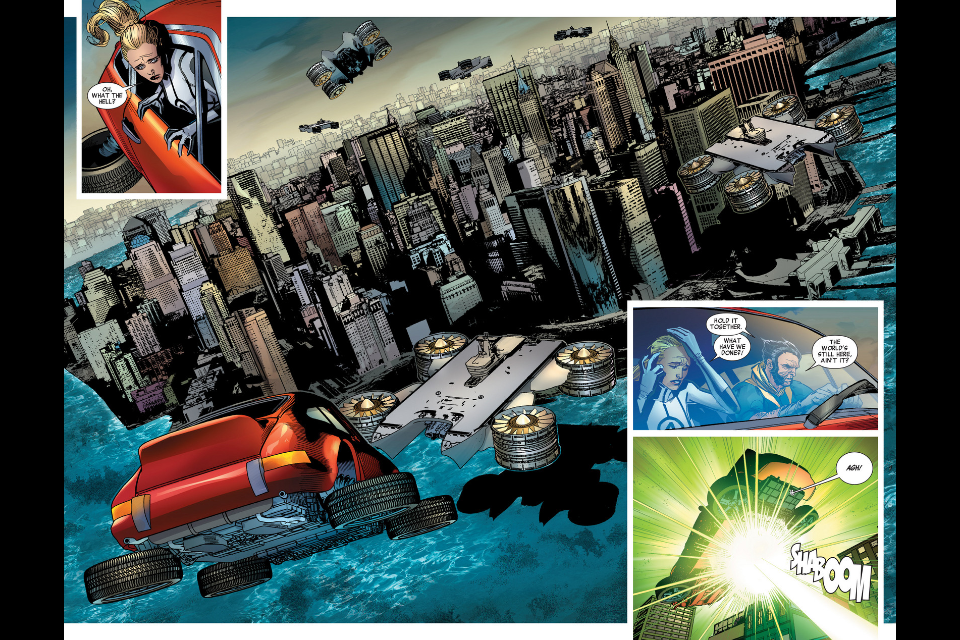 All of a sudden, the hover car is hit by an energy blast. Wolverine & the Invisible Girl jump free before the car smashes into the side of a nearby building and explodes, Sue using her force field power to surf to the ground with Logan in tow. Upon landing, they confront their attackers, revealed to be an incarnation of the Defenders, comprised of "Colonel" America (who is also sporting an eyepatch ala Nick Fury), Dr Strange (The team leader), the Hulk, the Thing, Star Lord, Wasp in a Captain Marvel uniform, Cyclops (though he goes by the codename Cable and more closely resembles his son) & the Wolverine of this timeline.

The Defenders assume that the duo are Skrull impostors or a "Le Fey trick" and order them to start talking. Instead, the Invisible Woman releases a force field shockwave, stunning the Defenders and allowing the two to escape. The other Wolverine quickly singles out his AU counterpart, the resulting brawl spilling into a nearby kitchen away from the others. AU Logan eventually knocks out his other self and attempts to leave, only to receive a massive wallop to the face via the Thing.

With the unconscious AU Wolverine over his shoulder, the Thing re-groups with the rest of the Defenders, who have  successfully rendered AU Invisible Woman unconscious as well. The team conclude that the two are not Skrulls, as they would have reverted to Skrull form upon being knocked unconscious. Dr Strange says they should talk to "him", but Colonel America disagrees, saying he'd rather not. The person in question replies "well it's a good thing I showed up on my own then", revealing himself as a half-cyborg Tony Stark, flanked by a small army of drones resembling Iron Man... 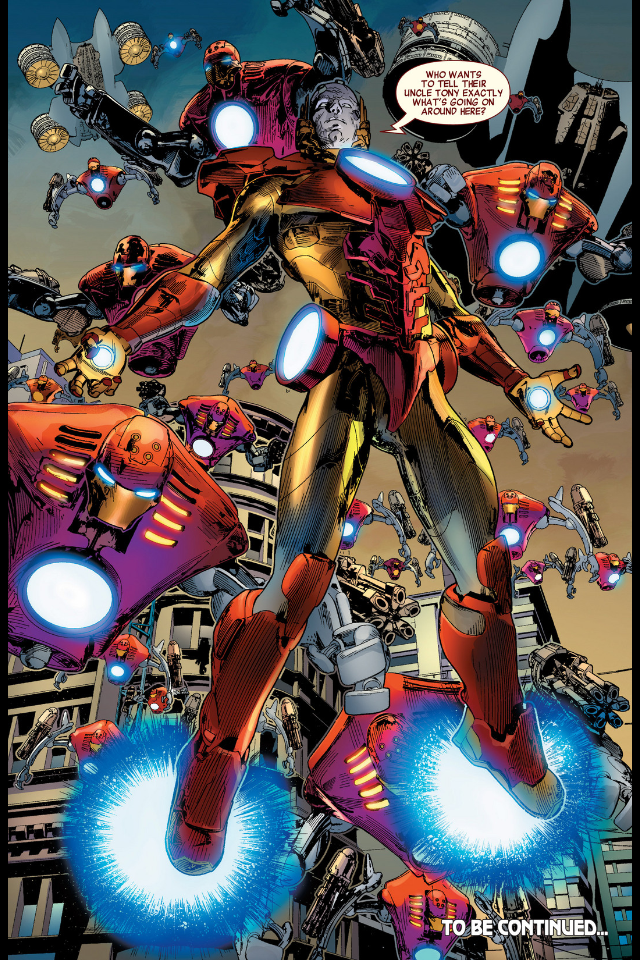 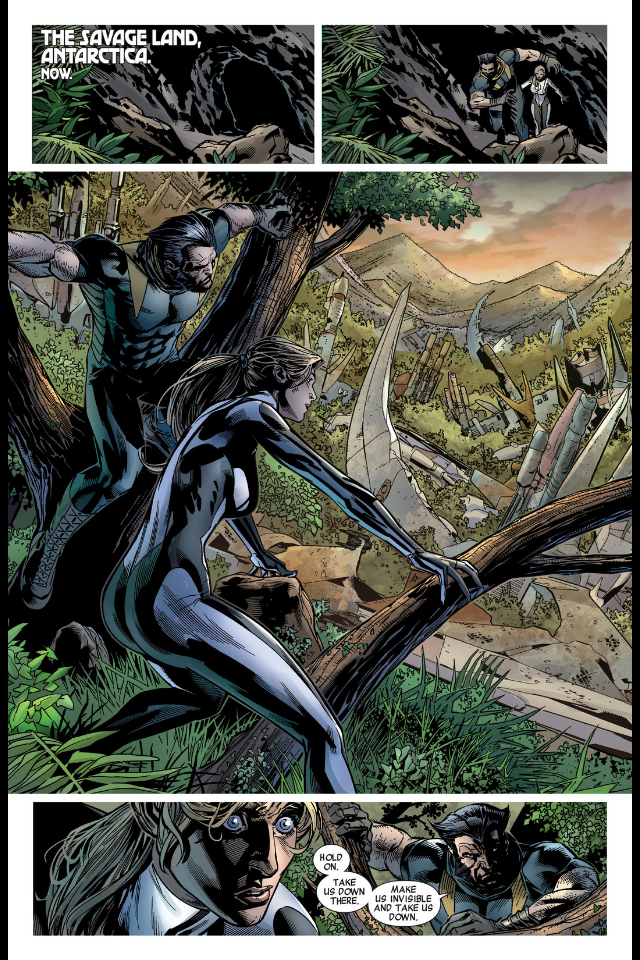 Um...I'm not really sure what to make of this issue? On the one hand it's interesting to see the impact Wolverine killing Past-Hank Pym has on the timeline of the Marvel U, but on the other, this issue feels more like a step sideways than forwards as not much happens beyond seeing the consequences of Wolverine's actions. There's only three issues to go and we haven't even seen Ultron yet?
That being said, the issue isn't a dud in terms of dialogue and characterisation. The new Defenders team is certainly very interesting and the new looks for several of the characters are quite cool, plus it's nice to see the regular Hulk seeing as how he was killed off before the beginning of the series. The dynamic between Wolverine & Invisible Woman is still very interesting and Bendis continues to justify this unusual pairing by pitting their divergent moral codes against one another. I have to question where Wolverine gets the car that they fly to New York from though. If it was from the bunker then why didn't he just use that one in the first place instead of stealing Fury's car? And if the car they're using to get to New York IS Fury's car, then how on earth is it not rusted and torn apart by the native dinosaurs? Okay, I'm starting to nitpick now.

Brandon Peterson's artwork is still very mixed. There are some really weird facial expressions here and the art isn't very detailed in places, though when it is it looks brilliant. Carlos Pacheco continues to provide the more polished and consistent artwork, though he doesn't get as much to do here, though that looks set to change in future installments... 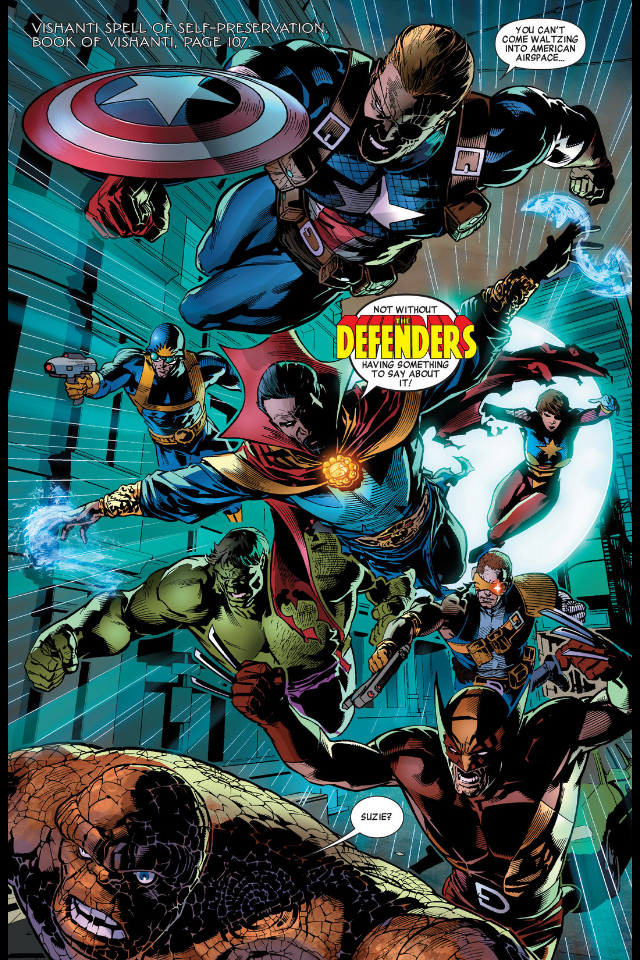